In 1988 the city of Barcelona called international competition for a new project for the City Botanic Gardens. The contest was won by an interdisciplinary team of architects Carles Ferrater and Josep Lluís Canosa, the landscape architect Bet Figueras, the horticulturalist Artur Bossy and biologist Joan Pedrola.

The need for access to new equipment to house the Barcelona Olympics in 1992 affected the existing garden seriously, circumstances favored the proposal to build a new botanical garden in the city while acogiese a building for the Botanical Institute and its collections and become a reference center for the conservation of Mediterranean flora.
Work began in 1991 with the cooperation of the City of Barcelona and former ICONA and a grant from the European Union. It was inaugurated on April 18, 1999.

The first botanical garden in Barcelona goes back to the late XVI century and was located in the Plaza Real. Late in San Joan Despi XVII creates other scientific purposes, but the most immediate reference is created by Dr. Pius Font i Quer in 1930 in the quarries of Foixarda Montjuïc and next to which is built in again.

This part of the mountain has been reinvigorated with the new Botanical. In its grounds, as in many other of Montjuïc, sat a large slum shacks known as Can Valero and later a municipal waste landfill.

Set in the gardens of Montjuïc, in the north side, between the Castle and the Olympic Stadium Lluís Companys, on land with steep slopes, 140 meters and 100 peak minimum.
Its shape resembles a large amphitheater facing southwest overlooking the Llobregat river delta, the Olympic Ring and part of the metropolitan area of ​​Barcelona. As background the mountains of the Garraf and Collserola saws and Marina.

As a geotechnical study, approximately 50% of the area of ​​the Botanical Garden belonged to a landfill deposits up to 20 meters deep in some areas, the other 50% is mostly rocky terrain with slopes up to 30 percent.

The Botanical Garden is a new intelligent infrastructure design and architecture inspired by fractal geometry, which allows the project to grow in a very flexible and creative, keeping in line as a whole to establish a strong tension with the vegetation growing and wealth in the perception of the scale.

The design features are beyond the drawing board and incorporate ecological criteria, as phytosociology and convergence of morphological evolution. Landscape is more like a botanical garden than a conventional.

To construct the architectural team has looked at two key considerations:

It is related to the structure of the vegetation, as they were projecting plantations following a geographical organization, so that the plants will be grouped according to the five Mediterranean regions existing in the world, and within these areas, grouped by ecological affinities, is ie representing natural landscapes.

It was necessary to allow the project to provide the same mountain topography spaces both plantations and for the design of the road network, taking advantage of the natural relief and thus avoid major earthworks.

As a result of these two premises, we chose to adapt a triangular field, which rest on the topographic base of the mountain and in turn define the 71 spaces needed to represent the main plant families of the world’s regions with Mediterranean climate.

The spatial strategy used to structure the collections of the garden is a network of triangulation techniques inspired Topographies. The irregular triangular mesh becomes the basis of a hierarchical system that determines the size of the plots for planting. This system allows a very flexible and creative planning while formally different spaces form a whole where designs are repeated both in small and in large scale.

Fractal geometry triangulation plan is reinterpreted in the smaller scale, in a zigzag pattern, the design of the facets of the system path on the sidewalk, which is divided into small trapezoidal shapes, and in the “broken “volumes of the entrance building.

The strong contrast and dynamic tension is set to the entire surface of the garden, between formality and materiality of the roads and the walls and the “natural” evolution of plantations, wild and seemingly anarchic. When strolling along the paths you have the feeling of receiving the landscape in four different scales of perception:

For this building that there is a place dedicated to the landscape and vegetation where nature is the protagonist, Carlos Ferrater designed a simple structure and complex linear geometry and distribution, while Mediterranean and constructive language sensitive mountain areas.

It is located on the highest point of the Botanical Garden, in the northwest area and was thought
Leakage as a rod in a horizontal path towards facing the sloping ground. Its 3,300 square meters of floor space spread over three levels.

It houses underground and types of special plants that prefer a constant temperature and low light.

Accessible to the public visiting the garden welcomes public services, the bar-restaurant, auditorium, exhibition hall and the Cabinet of Natural History. A row of large windows, cut the volume clad in dark wood, framed botanical garden, the city, its sea.

Almost like peeking into the landscape, almost extruded, this part of the building moves with respect to the body of concrete, projecting forward moved designing a profile, but always simple, minimalist.

On the slope of the land, has a separate entrance at the rear of the building. It leads to the library open to the public, research laboratories, to the room where the tools for the care and management of the garden, to management and administration.

The network of trails offers visitors a choice of routes, each of different botanical interest. According Ferrater is a “labyrinth without a center,” which functions similarly to a golf course several rounds allowing simultaneous.

The result of the location of these roads was subordinated to the irregularities of the topography of the site, a rational grid, which in a way similar to L’Eixample Cerdà, urban plan that allowed the expansion of Barcelona, ​​allows great flexibility and ensures the continuity of the project as a whole.

“I was horrified by the sight of the prospect of a long way up the hill,” says Beth Figueras. Instead zigzag paths were conducted according to the triangulation network. Sequences were searched surprise and different perceptions of the scale, sometimes walking about the garden, sometimes between plants.

The bill establishes two hierarchies of roads, the main with a width of more than 3 meters and side ranging from 1.6 to 2.6 meters. The slopes vary between 4-6 percent and occasionally 8 percent in the main and a 11.8 percent in the secondary. In the meeting points of the primary and secondary roads are created flat areas used as places of rest, distribution nodes, viewpoints, explaining places plants in the area and links to information.

Two base materials with an untreated finish, weathering steel and concrete in situ, were chosen for the hardwork, wide path infrastructure and buildings that provide identity and continuity to the garden.

Corten steel, recycled wood and concrete are the most used materials

The tour is organized through cement roads and squares whose walls, made of reinforced earth and in some cases supported by Corten steel plates, material that is maintenance and whose color is reminiscent of the plowed land. Corten steel is repeated in the doors and on the facades of the Botanical Institute. Because geotechnical soil found that met the highly variable depths properties and thus was not suitable to perform a strong need walls foundation, finally opting for reinforced earth walls foundations need not have the necessary structural stability and offer flexibility enough to absorb the deformations that may occur in these unconsolidated soils.

The concrete roads that cross the botanist are 22 cm thick with a triangular expansion joint of 25mm. The reinforcement in the concrete used on trails used only in the area of ​​the former landfill, where there was a risk of ground movements. On main roads the mantle is smooth concrete, while in the secondary, more outstanding, has done a fine scraping to improve grip.

For hedges recycled wood was used, trying to respect the process as much as possible the deals offered by the mountain with sustainability criteria and order.

The irrigation system is made from a hundred spears activated from a computer, avoiding wires and placed in the guide grids, like drainage networks. 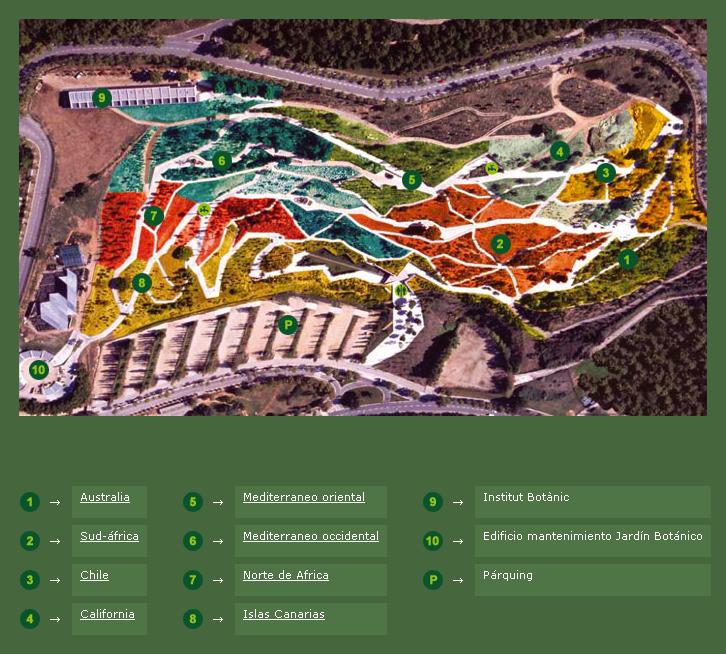 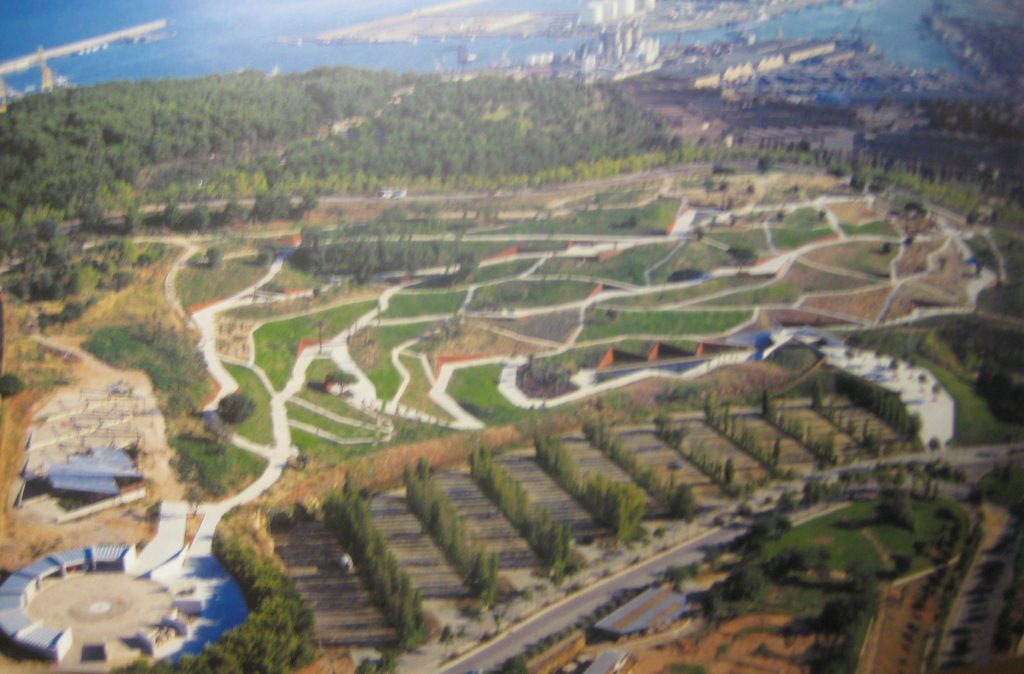 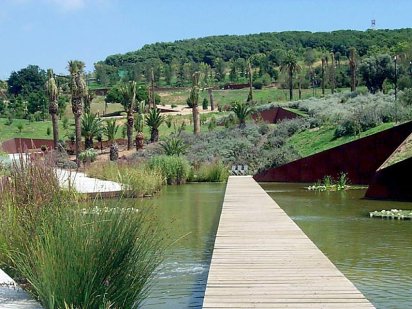 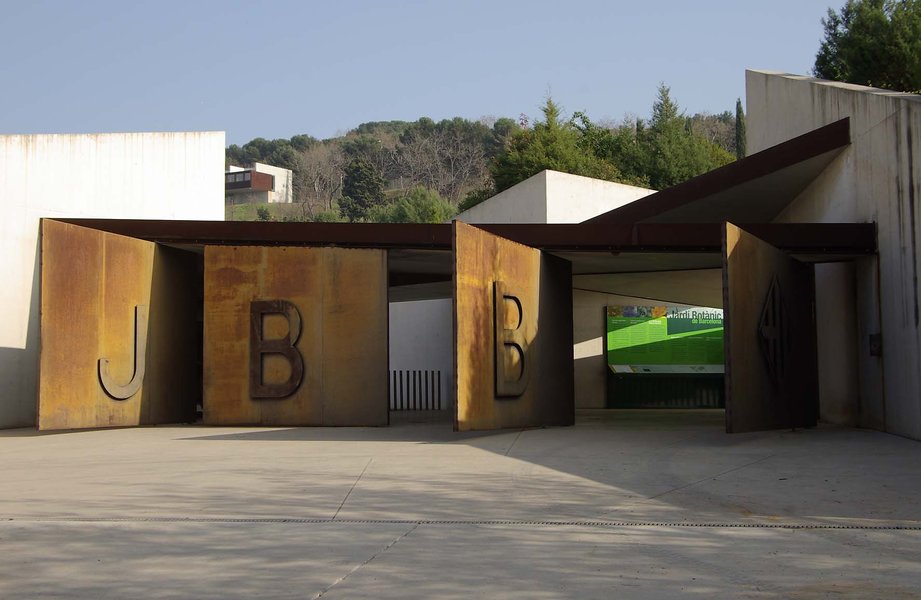 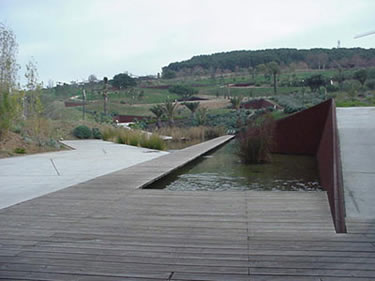 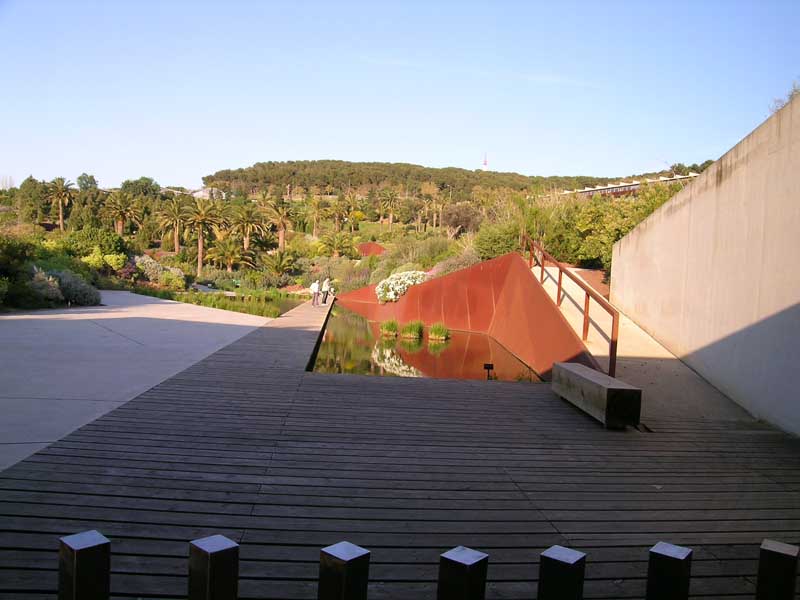 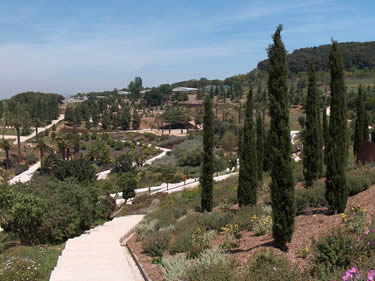 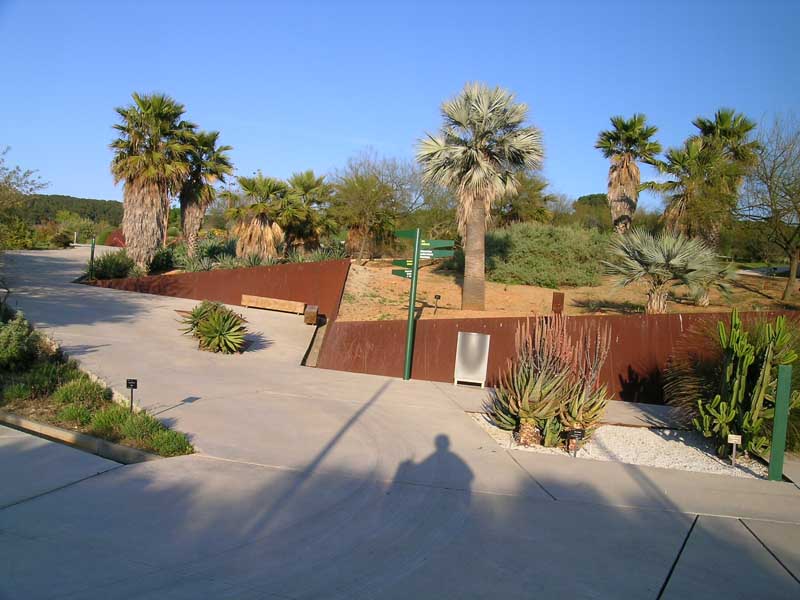 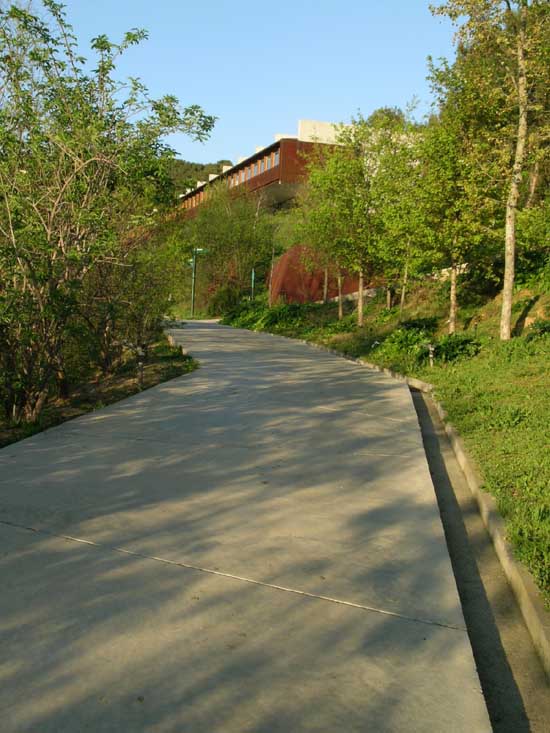 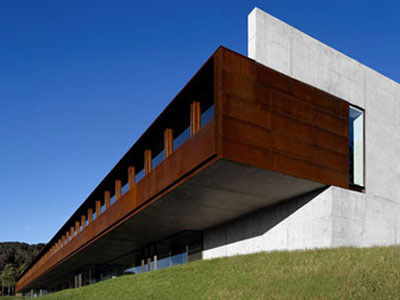 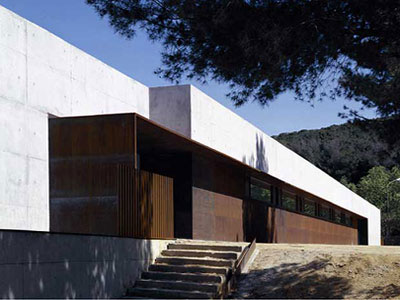 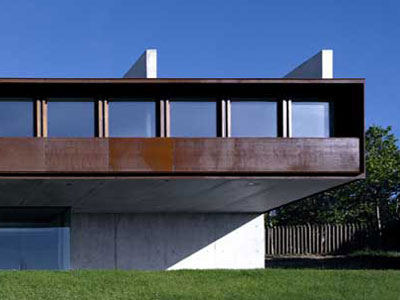 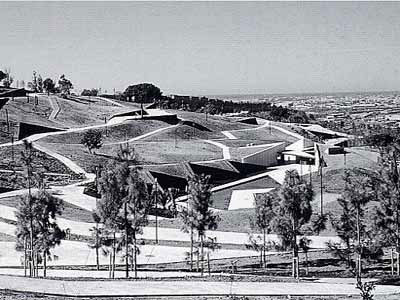 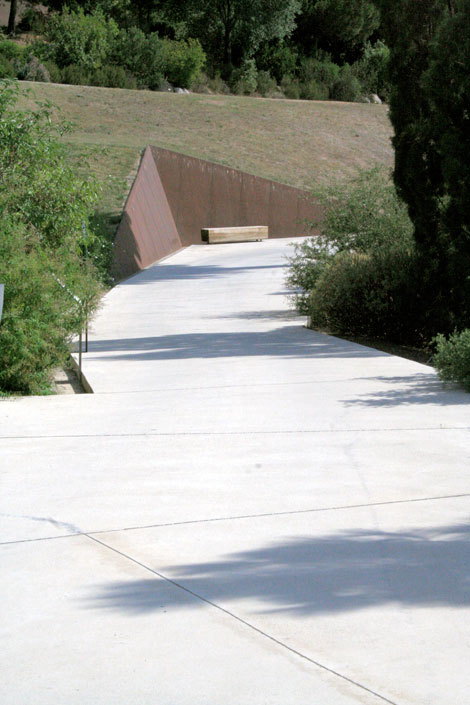