Historically the Lower East Side was a neighborhood of immigrants, Germans, Irish, Italians and Hispanics, but since the late 1990s has experienced a period of “gentrification”. Blue Condominium construction has sparked debate among residents, design professionals, and the general public as an example of the growing number of new luxury condominiums in the neighborhood, a phenomenon that has caused concern for the physical and demographic preservation thereof and the preservation of its character.

The construction of the tower ja involved several milestones. For architect Bernard Tschumi, it was its first residential skyscraper. For the Lower East Side, this was the first building with 24 hour doorman, along with cold storage for food deliveries.

The Blue Tower is located north of Delancey St, at 105 Norfolk Street on the Lower East Side of New York, United States. Designed by architect Bernard Tschumi has become an iconic image of this area of ​​the city, with dazzling blue exterior, the exquisitely juxtaposed luxury and sustainability.

For more than a decade Manhattan experienced a boom in the development and construction, including the Lower East Side where skyscrapers and luxury residential towers were erected, plus numerous urban planning projects, primarily residential, such as with Crossing Delancey St Essex and the Williamsburg Bridge to the south, protected houses and the East River with low-rise apartments to the east, low-rise apartments and north Houston St and Market St and Essex Sara D. Roosevelt Park to the west. 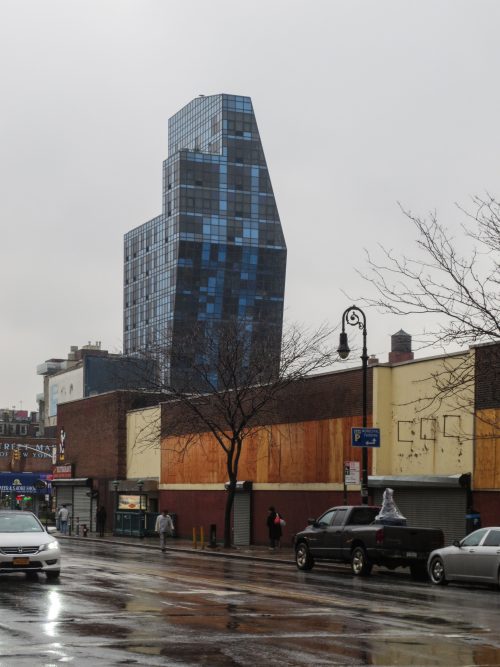 Despite strict zoning constraints and business requirements by the city market-driven New York, Tschumi designed an original engulfing pattern and a distinctive way to set simultaneously the two parameters.

The strategy creates a very specific architectural statement responding to the eclecticism of the historic district of Lower East Side. Its structure does not respond to a theory or formal gesture, its source is the character of the place, relying on an angled shape with wrap pixelated as architectural statement, respecting and embracing the dynamism of the neighborhood.
The pixellated facade of the building reflects a mosaic of diverse communities that surround it, while the mixture in the sky, so that echoes both be referred to the center of vibrant dynamism New York. 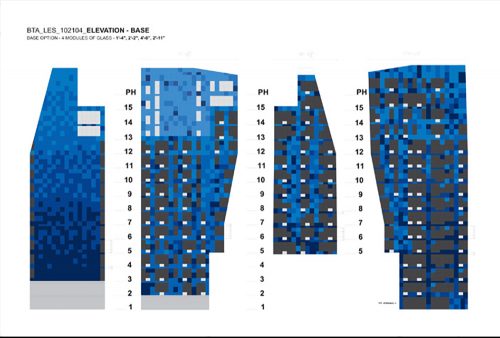 The base of the building occupies a plot for residential use, with areas cantilevered over an existing building designated for commercial use. The slightly sloping walls facing the street and the backyard artfully negotiates the different rules back, crossing the line between commercial and residential areas.

Its construction was made possible largely to the purchase by the promoters of the “rights of air or sky” of several neighboring buildings. Such as cantilever over the commercial space on the south side of the building, or an angle from the bottom up, expanding the size of the units located in the upper floors, with stunning views of Lower Manhattan, River Aryan. This strategy also maximizes the amount of allowable residential square meters. Pixelated facades reflect both the internal arrangement of the spaces as the multifaceted character of the neighborhood below.

The tower also recycled as an urban garden on unused space at the top of a neighboring commercial structure, which offers a common space for residents and guests with broad views of the Williamsburg Bridge.

The building consists of 32 apartments in total, 21 units of one and two bedrooms near the base, 2 complete plant units with terraces above and a duplex penthouse as coronation. The wall created by the inclined window is a feature of many units although all have full-height windows in the living and dining rooms. 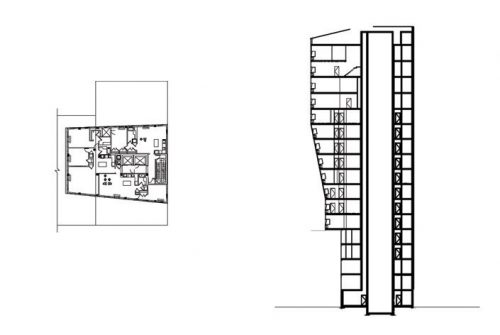 With flat slab, a structural system of concrete poured in situ and insulating glass facade, the structure of the tower was built, like many residential skyscrapers built in the city of New York. What is not similar to other high-rise residential towers is unconventional mass that required a special cantilever slab and a detailed curtain wall.

Floor plates fly to the fourth floor with flat slabs and a structural system of concrete poured in situ and insulating glass facade, the structure of the tower was built, like many residential skyscrapers built in the city of New York. What is not similar to other high-rise residential towers is unconventional mass that required a special cantilever slab and a detailed curtain wall.
The floor plates of the fourth floor fly to 11′-0 “while on the twelfth floor do 21′-0”. These measures are cantilevered plates according to the angular shape.

The curtain wall system uses architectural glazing Uni-Wall Curtain Wall System, meeting corners having up to four angled walls and interconnecting with other essential by using a 3D modeling a. 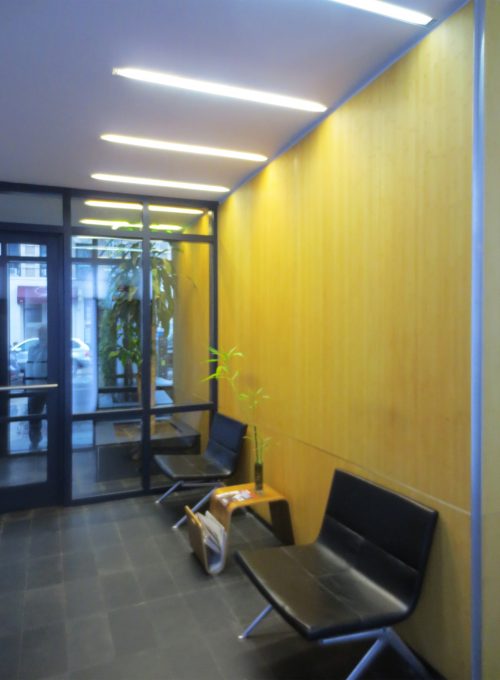 Unlike conventional curtain wall construction, the system employs unified components that are glazed, sealed and assembled at the factory site and then shipped assembled on site placement. The pixelated facade consists of 4,000 individual pieces of glass which 64 are crystal blue tinted vision and 2,400 blue opaque glass eardrum. To complete the design of the facade insulating crystals were used with four different shades of blue eardrum.

The materials used in the interiors vary depending on your location, concerned standard apartments, high quality apartments or common areas. In the standard apartments, the materials include bamboo plates and pebble stone floors, bathrooms with white tiles, white stone countertops and metal cabinets.
In the apartments of top quality materials include palm and stone floors, glass tiled bathrooms, and a more sophisticated cuisine.
In public areas bamboo panels of the walls, stone floors and white glass panels they backlit placed.

The Blue Tower also recycles unused space on top of a neighboring commercial structure as an urban garden provides communal space for residents and guests with broad views of the Williamsburg Bridge.