A subway system is an excellent demonstration of how the built environment can influence the quality of our daily lives. The construction of tunnels for trains often viewed in isolation from the provision of circulation spaces for people, even though they are part of an ongoing experience for the traveler, beginning and ending at the street level. Designed and built in two phases to create a pair of interconnections of underground along the banks of the Nervion River lines, Metro Bilbao was conceived as a whole: from the beginning, the skills of architecture, engineering, construction and graphic design They were built on a shared vision.

Unlike most subway systems where users must rely on the signs to enter the platform, subway Bilbao was designed with a legible architecture that allows direct access to the vast tunnels, either by conventional stairs mechanical or glass lifts. Thus the experience of movement through one large volume is dramatic while simple, and the concept offers a high degree of flexibility for future cambios.Las curved shapes of these spaces are the expression of the enormous forces to be support and for which they were designed, while its construction reflects the great tradition of engineering Bilbao. Spanish engineers, pioneers in the use of mobile portals for aerospace exploit this technology to erect prefabricated concrete panels for the seasons.

The metro network Bilbao, Spain, extending on both sides of the estuary of the city. With its layout in a “Y”, the two lines run both sides and meet in San Inazio station from where they continue on a common route that leads to the municipality of Basauri. Line 1, Plentzia-Basauri, runs 31 km and Line 2, Santurce-Basauri, 20 km, with a common section of the two lines of 10.5 km, San Inazio-Basauri.

In 2007 and 2008 the Basque Government has submitted projects for the expansion of this service by adding Line 3 that lasted until the airport of Bilbao and Lines 4 and 5. 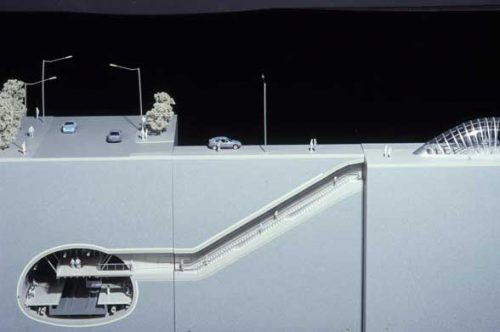 The fundamental idea in designing the metro stations for the metropolitan area of ​​the city of Bilbao was to plan an underground network near the street level, with direct and easy access to all major stations accessible and high vaulted ceilings where nobody felt locked. Sir Norman Foster resorted to “cave architecture”, emphasizing the originality, simplicity and efficiency, making it perfect example of the result of engineering and architecture when they work together.

Looking for simplicity and convenience for the user, the two tracks and platforms are in a unique vaulted space to clearly distinguish which is pierced stations. All stations respond to the same pattern, except for two that are located shallower and have been made with shielded vertical excavations and covered with soil on the surface, the most spectacular is that of Sariko.

The glass canopies, known as ‘Fosteritos’ in reference to its designer, announced at street level entrances to the metro and Lina 1 are as special as the Art Nouveau style The Paris Metro designed for Héctor Guimard. 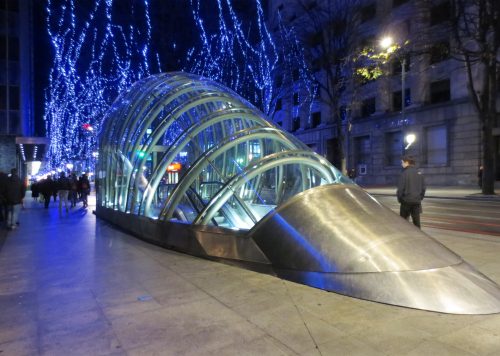 . ” “… A gem of glass on a tunnel at night it shines with artificial light during the day is semi-transparent; it can be protected from rain and reflect sunlight. Has minimal maintenance and is likely to contain signals it is well instantly recognizable symbol of Metro… “‘(Report of the project, Norman Foster)

Its shape is reminiscent of slanted movement and is generated by the profile of the escalator tunnels as they rise to the level of the pavement. The shelters receive natural light during the day and light up at night, forming welcome beacons in the urban landscape.
In line 2, where stations cutting depth make it impossible to use escalators, elevators banks create points easily recognizable iconic entrance at street level.

With a setting in “Y” and a length of 45.10 km Metro Bilbao it was inaugurated on November 11, 1995 and has two main lines with 41 stations of which 22 are underground and 16 surface. The platforms have a track width of 1m.

Since the beginning of the project has paid special attention to the design and architecture of the stations. In addition to aesthetic considerations it was necessary to incorporate aspects of functionality, simplicity and comfort for the traveler.
Bearing in mind these design concepts Foster and his team is mainly based on the following lines: 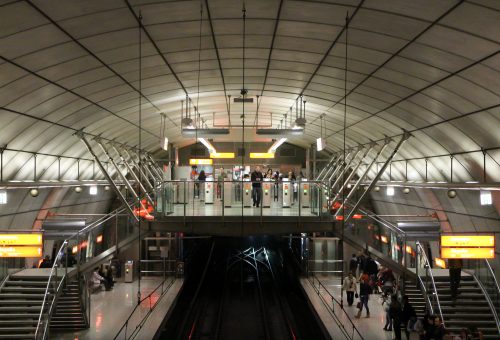 Treatment of “cavern station” with a cross section that is 160 m, where the tracks bays, platforms and mezzanines.
The mezzanines are the main concourses linked to all the facilities, which also include the ticket dispensers and offices. The stations offer an extraordinary feeling of space where passengers do not feel enclosed, with access to all services. The lobbies hanging from the ceiling give the station aerospace features of great beauty and functionality. Generally each station has two input guns have escalators and elevators that lead to the foyers suspended above the tracks by large steel braces.

This is the part that emerges to the city, the architecture of the street, whose main feature is the steel and glass shelters, known as “fosteritos”. Successive steel rings that accommodate the curvature create an organic tube which bears some similarity to the body of a hundred feet or cochineal. Its structural role is to protect from the cold and rain at the same time creates an iconic landmark that shows access to the Metro.

This spectacular resort located between San Ignacio and Deusto differs from cave type. Their resolution was a result of the large existing gap in the square of the surface, about 6m, and the poor quality of rocky ground. 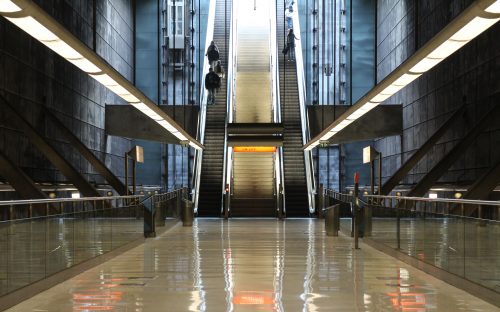 Unlike other drilled with TBM in Sarriko a false tunnel 20m deep, a total drain volume Foster took the opportunity to ride with precast station as a “puzzle”, a large glass at street level was created covering its huge dealer and allowing the entry of natural light. Given its size this structure is known as the “fosterazo” because it is the largest of the canopies designed by Sir Norman Foster for Metro de Bilbao.

This station has the longest straight lines of the city, 16.5m in length meter and a height of between 13 and 19m between the level of the platform and the underside of the cover.

In 1998, Metro Bilbao received the Brunel Award for Architecture in its entirety railway station and Sarriko in particular.

There are three well-defined aspects in the treatment of the design team of architects and engineers had in mind for subway construction: the internal processing of cave or tunnel intercom stations with spaces and external appearance emerges the whole urban city. These three aspects shape the overall structure of the building. 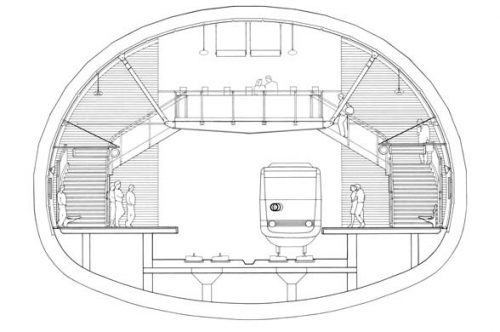 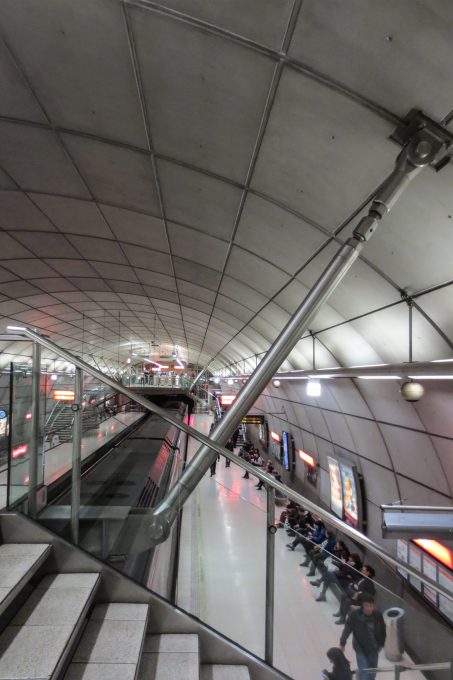 Excavations followed the main idea of the designer. Foster planned for each of the “cave” became the heart of the system, a unique space to gather all services. To achieve the construction began following the Austrian tunneling method. Using a first TBM pilot 35m2 gallery polling mode he was drilled to explore the rocky uneven ground plan and allow the different stages of implementation. On either side of the gallery “ears” that supported with trusses gave rise to the upper arch, below the central ditch opened, kidneys and against vault, which shaped the final excavation were drilled.
The caverns of 160 square meters in cross section are where the vials are placed, platforms and mezzanines distribution. 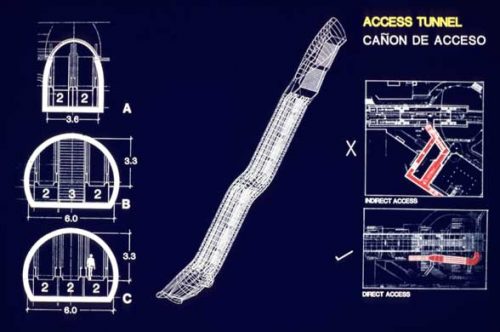 The stations consist of a large basilica gallery hung with two aisles and floor, creating the sensation of very light structures when in fact they are solid and resistant. These hanging platforms that connect to the platforms via stairs and a free for escalators access corridor, hanging from the cave by huge hinged steel fasteners.

Maintenance items such as ventilation, cables, water pipes, etc. They are under the platforms. The inputs and outputs are designed as elliptical concrete canyons lining the route of the stairs and reach the street go from concrete to glass. 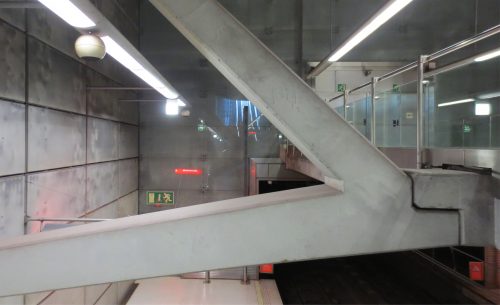 When the terrain is rocky season is type “box”, with vertical walls and flat roof screen, an example is San Inazio stations and Sarriko.
In the station was required Sarriko tunnel 20m depth due to the unevenness of almost 6m above ground and the poor quality of rocky ground.
In a mezzanine concrete platforms hanging over the tracks, but this time instead of being held by long steel braces are a robust concrete struts which fulfill the task, adapting better to the dramatic space amounting to heavy beams cover. Due to its characteristics is popularly known as “Spider” or “one hundred feet.”

The route of the Metro de Bilbao Ria crosses twice. The tunnels excavated in these cases required different technical solutions.

In this step, a technique known as “floating tunnels” and first used in precast concrete tunnels were used Spain with the support of Danish experts, because the poor quality of the soil did not allow any excavation. The huge dimensions of the project implementation difficult to have to make some drawers to place within two vials and related ancillary services.
These prefabricated parts had to be manageable to move them, move them and place them in your location, for they were “floating”. Two modules of about 90m in length each were produced, with 12 x 8 meters in cross section and a weight of 8,000 tonnes. Each module has two cavities with a central aperture.

Although this step showed similarity to Olabeaga regarding soil quality, the technical solution adopted was different. A sophisticated technique known as “jet grouting” consisting go creating artificial rock, consolidating and strengthening the loose strata to the point where it is possible to drill a tunnel used safely. Once he achieved this purpose we continued with the traditional method of excavation.

There are basically three types of materials used in construction and architectural design, reinforced concrete, steel and glass. 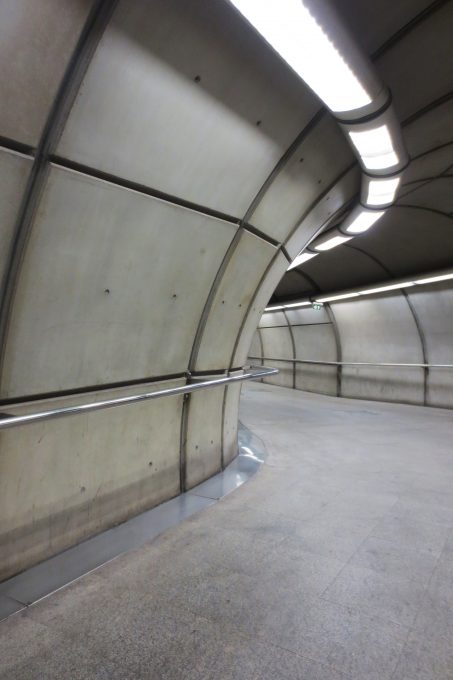 Pergolas input and output stations are created with a structure of steel and semi-transparent glass during the day offering protection against rain and require minimal maintenance.

In public spaces surfaces are finished with modular panels, 240x120cm, of architectural concrete. These prefabricated panels are used as formwork coating for pumped concrete. The remarcadas and wide longitudinal and transverse joints give a dynamic rhythm to the walls and hanging platforms character helps to break the heaviness and oppression that causes the entire cavern.

All stations have elevators installed in “pits” dug especially for such use, the most spectacular being the area that communicates with the station Begoña Old Town and 50m deep.