The mega Berlin Train Station, Berlin Hauptbahnhof, architect Meinhard von Gerkan and Jürgen Hillmer, the STUDIO HAMBURG Gerkan, Marg & Partners, is capable of receiving more than 1,500 daily trains and 25,000 passengers. Its construction lasted ten years have meant that some conflicts between the German rail company Deutsche Bahn and the architect, in deciding to first shorten the time of execution of the work by modifying the project. It shortened the cover of the station at 100 meters and the lower floors that serve as the underground heat exchanger to be covered, causing no daylight arrived as planned in the initial project.

The construction of the new Berlin Hauptbahnhof is a masterpiece of logistics. While conducting the excavations, groundwater levels were constantly monitored by monitors at once that they were going up the bridges and 1.5 million cubic meters of earth were removed in barges, which otherwise would have required a convoy 1300 trucks miles long. 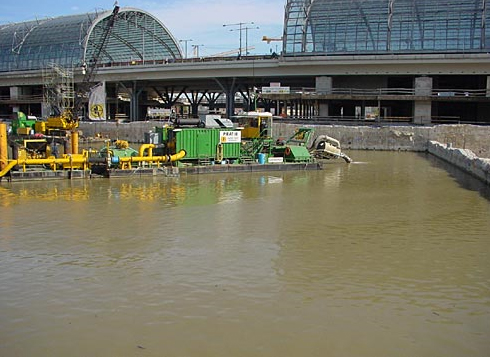 A complex part of the construction was related to the foundation, as the building rests on a sandy soil on the banks of the river Spree. To overcome this difficulty concrete ponds were constructed at a depth of 25 meters that were filled with groundwater.

Another of the engineering feats that took place in this construction was the laying of a metal bridge that crosses the station across. Because of the risk posed by building it as the station was crowded with people, it was decided to run for a weekend in which the station was closed to the public for 54 hours. Then the structure was built in two parts vertically and 1,200 tons each, and then joined as a drawbridge.

For architects of Hamburg Gerkan, Marg & Partners, the determinant of the architecture was developed to emphasize the importance of the new Hauptbahnhof-Berlin – Lehrter Bahnhof crossing point in an increasingly integrated Europe and to highlight, in turn, the existing track of a railway routes within an urban context through architectural means.

The lobby of the station is framed by two curved structures 46 feet high trying to highlight the scale of the place, the importance of the station as a crossing point between Europe and link the east and west.

For architects of Hamburg Gerkan, Marg & Partners, the determinant of the architecture was developed to emphasize the importance of the new Berlin Hauptbahnhof “- Lehrter Bahnhof crossing point in an increasingly integrated Europe.

The lobby of the station is framed by two curved structures 46 feet high trying to highlight the scale of the place, the importance of the station as a crossing point between Europe and link the east and west.

Between two frames is the central nave that houses the station platforms, 430 meters long, oriented in the direction east – west, covered by a huge glass dome and light that extends over 321 meters.

The building with north-south orientation of 45 meters wide and 159 long, are situated between the two blocks of buildings and covered by a barrel vault, filigree and glass.

From the standpoint of architecture and urban planning, these structures, called building bridges form a unit with the glass vessels of the train station.

The point of intersection of the two railway lines long distance is enhanced by the cruise ships of the two windows.

The two buildings of the station bridge are divided into two distinct functional areas. The areas for commercial uses, restaurants and service for rail users who occupy the lower levels and areas of 50 000 m² offices occupy nine of the ten floors of these buildings. They are functional and adaptable offices as required, by contacting the different spaces by stairs. 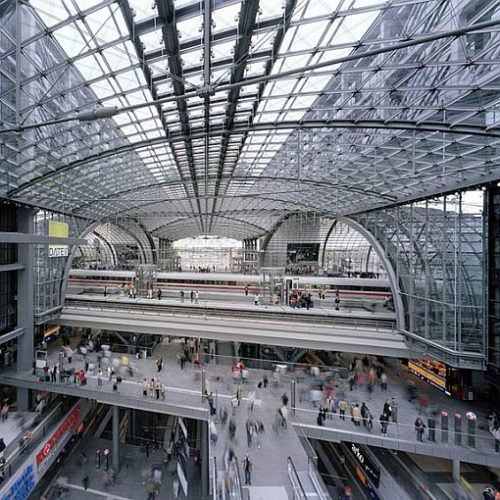 With its generous empty three floors of shops and restaurants between the two levels of terraces, the station also became the commercial and business center of the future neighborhood around the station.

The large and bright area, was designed using a structure that uses space grids braced by cable networks. These grids allow free surfaces and extraordinarily transparent as glass directly, or whether the supporting structure and the glazing support are the same.

The station relies on a cruciform base, which simultaneously integrates the dominant diagonal blocks of buildings. The rectangular socket is accessible from all four sides by stairways and offers great public spaces to a height of 4.43 m above street level, clearly separate from the areas of circulation. 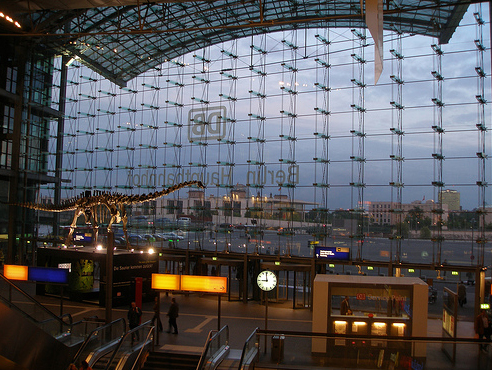 The entrance hall has a glass roof that connects to the bridge that has buildings on the sides, serving outside the supporting structure the same as support beams in the shape of a fish’s belly, with 4, 70 meters high on which rests the glass dome of the roof.

The glass roof of the new station in Berlin is a high-tech construction of the modern era. The roof running east to west from the station and covering the new commuter rail bridges was designed with CAD and advanced processing techniques

The undersides of the last two floors are designed as cross vaults in order to create high quality spaces.

Visible for miles, the four exhaust pipes rise well above the roof of the Hauptbahnhof, New Berlin, as are its tallest structure.

Its underground part sinks about 20 meters below ground level, with a reinforced concrete structure from which emerges another steel with 60 meters high, which have been invested 250 tonnes of gold. Deutsche Bahn’s logo on each side of the vent pipe can be clearly seen through a wide area of central Berlin.

The cross trusses that form the bridge structures average weight of 1,250 tons each, were placed vertically on the towers and were lifted by elevator, of 330 tons each, were carried into position with an inclination of 15 °. With eight elevators got similar place each section horizontally. In this position could be screwed temporarily lower and cords to connect the upper and middle strands of the structure. With a span of 42 meters, north-south deck was pre-assembled in various parts of the towers on the south side and on the tracks. To this end, fixed bridge routes to these structures.

In its construction have been used 500 000 m³ of concrete and 85,000 tons of steel. Individual bays ventilation towers are equipped with 27000 glass blocks.

Special attention was paid to issues of security and fire protection, both in the planning and construction, using components that are designed according to the latest advances in safety and prevention.

The roof is a giant dome of 20,000 square meters consisting of 11 800 glass panels, none of which resemble each other. The glass ceiling was completed in a record time of just four months. A total of 85 miles of steel cable support and secure the roof against wind and weather. These panels weigh about 100 kg.