The center shows the history of comics framing it within the history of storytelling in pictures, from cave paintings, through copyists of the Middle Ages to modern printing and comics. Also explores the different parts and aspects of this type of publication: 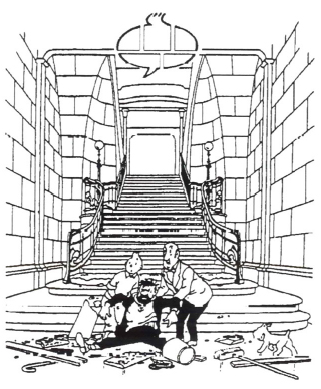 The Center is located in one of the last semi-industrial buildings that did the architect [[Category:Horta, Victor|Victor Horta]] and is still in use. In over one hundred years of history the building has had several different uses. During its first seventy years was the Waucquez stores, where textiles were sold. The building, at no time adapting to modernity and the twentieth century, closed in the seventies. In 1984 the state bought the space to locate on the new Museum of Comics. This project, devised in 1980 and had the approval of Hergé, author of The Adventures of Tintin, opened on 3 October 1989. This new use of the building was intended not only to keep alive and spread the history of comics, but also to provide a second heyday the building of Horta.

Víctor Horta deployed in this building its know-how modernist. After making his first works, such as Autrique House (1893) or the Hôtel Tassel (1895), in which he captured everything he learned in the school of architecture of Ghent and architects Jules Dubuysson and Alphonse Balat (author of the Royal Greenhouses of Laeken), Horta made ​​several masterpieces of Art Nouveau as your own home, the Museo Horta, en 1901 in 1901.

When he was commissioned the project of Waucquez Stores, Horta was at the height of his work. These, however, are not the first stores that project since 1903 had designed the Warehouses A l’Innovation. So, once again, the architect applied the iron and glass to create an architecture full of light.

The creation of Almacenes Waucquez born of the encounter of a fabric wholesaler, Charles Waucquez, with a growing business, with an architect who was living far more splendor of his career, Victor Horta. Thus it was born a space that shows the binding of nascent modern consumer society with modernist art.

The neighborhood where the center is housed at the time was characterized by being an industrial and commercial zone, with lots of activity, where several convents and barracks that housed three thousand soldiers were closed in 1905. The Rue des Sables also saw born and grow a large part of the Belgian press: L’Etoile Belge, L’Indépendance Belge, Le Peuple, La Cité, Het Laatste Nieuws, Het Nieuws van de Dag and De Nieuwe Gids, Panorama, Libelle, and between Mon Copain others. 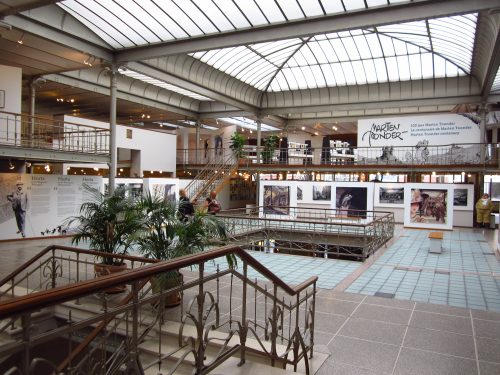 The decline was due to Waucquez stores the railway junction in north and south of the city of Bruselas. The shops of this popular neighborhood, they called the underworld, were slowly closing until it also had to do the Waucquez stores.

In 1912-1913 the store owner commissioned the architect Charles Veraart the construction of two mezzanine floors in the entrance hall of the building in order to develop more commercial areas. This respect Architecture Victor Horta, placing the middle floors between the ground floor and first floor.

Warehouses Waucquez retained its name throughout its history even though the company was sold several times. In 1923 it was acquired by Verberckt society, and in 1957 by Vertex centers. Yet the family was always Waucquez owns the building.

In the 70s the stores suffered their worst time Waucquez being abandoned and visited only by initiates or tramps and thieves. Fortunately in 1975 a former collaborator [[Category:Horta, Victor|Victor Horta]], the architect Jean Delhaye, got the building is cataloged. This allowed ten years later the project would revive the Waucquez stores will take place. Thanks to Guy Dessicy, collaborator and friend of Hergé, and Jean Breydel, architect interested in the revival of Belgian architectural heritage, it launched the Cartoon Museum. In 1984 the Belgian government finally bought the building. Reform may be necessary to overhaul the dilapidated building to house the museum sponsored by a non-profit organization supported by the French and Flemish cartoonists association.

The tasks of building restoration were directed by the Régie des Batiments de l’Etat in 1987, putting the previous studies in Christian hands arquietcto LELUBRE. The renovation was made by the young architect Pierre Van Aasche (Cooparch). This clearly introduced modern elements in space, contrasting and further highlighting architecture Horta. She had suffered much damage, so many skilled craftsmen and two years of work were needed to return the splendor to space.

The renovated center was inaugurated on October 3, 1989 by the kings of Belgium, opening its doors to the public three days later. Today the Belgian Comic Strip Center hosts exhibitions as well as serving as a documentation center and cultural embassy. It has also become one of the most tourist attractions of the city of Brussels and has achieved worldwide fame. In addition, the ninth art, the world of comics, and the Art Nouveau architecture, feed back, as if a visitor is attracted by one of these two issues, having also be known the other aspect of the Centre.

In 1986 the Studio Hergé developed illustration showing Titín characters on the stairs of the Waucquez stores, giving the Belgian Comic Strip Center a symbolic image that represents it.

The restoration focused on the adaptation of the spaces designed by Victor Horta to house the museum of comics. Since the entire building, including both the façade and the grand staircase, it was listed in the Belgian heritage had to take great care in restoring all the details.

Restoration of the facade in stone:

The Belgian Comic Strip Center is located at number twenty in the Rue des Sables |Brussels, Belgium. This street is located in the historic center of the Belgian capital a few blocks from the Grand-Place and Jeanneke-Pis. Down the road is the Marc Sleen Foundation and Museum. Very near Gare de Bruxelles-Congrès it is also being.

Warehouses Wuacquez are created in a period of great splendor of the city of Brussels marked by the reign of Leopold II (1867-1909). All artistic disciplines are in an intellectual environment in which they develop on the basis of technological progress. Within this framework it begins to develop production and mass consumption. Thanks to technological advances can create spaces made with iron and crystal getting bigger and let in more light into buildings. Bearing walls give way to iron pillars and large windows and skylights.

In this context the Waucquez stores are created. The space that served as a warehouse for the company uses the new aesthetic trend to create a splendid to trade their products space. This building thus follows the trail of the architecture of the nineteenth century department stores as Printemps, the Galeries Lafayette and La Samaritaine in Paris, but smaller version.

The current use of the building also has to do in some way with the time of creation of the building Horta, because in those years is when the first modern comic strips appear.

The facade is composed of seven modules that make up a virtually identical symmetrical front. The building has two entrances, one in the central module and another at one end. Despite the apparent correctness of the facade, stone framing the windows gets own sinuous forms of modernism. They are also evident in details like grilles and carpentry. Apparently the building has two floors with large windows, however, there are averages from within plants that multiply the space and create four different heights.

The building features a central hall and the grand staircase that starts from him. This space, with its double-height center, is illuminated by a large glass roof. The downstairs lobby is characterized by stone walls and columns, mosaic floors and part of the roof made of decorated glass. In the center of the room there is also a modernist lamp monkey street furniture in the shopping arcade. The iron and glass roof let more light from the skylight to the ground floor, where the entrance is located. On the ground floor section is divided into two levels by the middle floors added in 1912-1913. In these spaces the store, the library, the cafeteria and some exhibition spaces are located.

The top of the building has a lighter appearance than the bottom because their walls are not of stone, but in these highlights the lightness of the fine structure of iron. On the first floor is the bar and exhibition space divided between the main floor and upstairs half. Inside are thin metal pillars, the structure of iron and glass cover and the modernist designs of railings, windows and floors.

This space is dedicated to news from the world of comics. Through temporary exhibitions that change every month invites the visitor to discover new works and trends. The presentations also original artwork of the most recent publications show.

Possibly it is containing the collection of the world’s largest comics. This can also be consulted online.

The structure is mostly iron, which allows the creation of large glass skylights for light to enter into the center of the building. The floors are ceramic revoltones. The walls of the ground floor are lined with stone, which gives them a heavy look. As the building grows taller your light and transparent spirit is most evident. The materials used in this work are mainly iron, glass, stone, wood and tile.