The city of Beijing dresses up to host the Olympic Games of 2008. To do this most prestigious architects of the planet deploy their latest and most stunning creations by the city.
This water sports complex, that has earned the nickname “Water Cube”, is certainly one of them.

The installation was won after a contest in July 2003 by the consortium formed by the China State Construction and Engineering Corporation (CSCEC) and Australian groups PTW Architects and Ove Arup.

Will have 6,000 fixed locations to which they will join 11,000 temporary locations during the dispute of the Games. Its interior has 70,000 square feet of facilities with 15,000 square meters in the underground.

Among its special features is the method of financing the project, since it has been paid entirely by the donation of Chinese emigrants abroad.

Currently it is estimated that more than 60 million Chinese living in other countries. Among them have collected more than $ 140 million that has cost the work. 25 of them contributed by the Hong Kong billionaire Henry Folk and his family.

Located in the western part of the Olympic Park, at the side of the spectacular National Stadium designed by Herzog & de Meuron. Covering an area of 70 thousand square meters.

Water inside and outside water. That is the concept on which were based creators of the Water Cube.

They wanted the building to reflect what was going to happen on the inside that it was none other than water. For this there is nothing better than a building with a structure based on the bubbles it creates the soap mixed with water lined with a soft layer and amorphous as the water that create the impression that the entire building this done on this basic material for life.

The feeling that one has to look at this building as if it had placed a bucket full of water on the floor and this has been withdrawn as if it were a mold of leaving the volume of water floating in the air for a few moments. 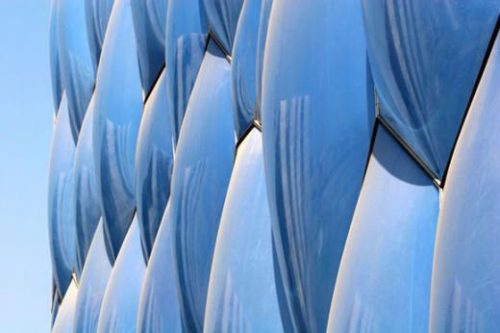 The greatest peculiarity of the plant is outside the structure formed by 634 translucent membranes, swollen with air at low pressure, a polymer called ETFE (ethylene-tetra-fluoro-ethylene) that cover a total area of 100,000 square meters composing bubbles and 3000 give it a feature allowing an excellent light throughout the facility but also by filtering ultraviolet rays.

At night have a novel lighting formed by luminescent diodes (LEDs) that save up to 60% of the energy consumed by conventional fuorescentes and that will illuminate the building at 16.7 million tones.

The project has been developed under the premise to be as sustainable over the resources used and respectful of the environment. In this way, is using solar energy and has ensured that the process of ensuring a clean water reuse in the order of 80%, also takes advantage of the building and provisioning of rainwater.

The building is supported by a system of structural steel and concrete that only follows the logic of the bubbles, creating a three-dimensional structure of 6,700 tons of steel resembling to a formation of soap bubbles in a bathtub.

To prevent corrosion of steel in a ambiete so wet it with a coating rich in zinc.

Beyond aesthetics of the search for architects, the system is ideal for a city like Beijing with constant earthquakes.

The structure of concrete and steel (6,700 tons) while the coating is created translucent membranes of ETFE (ethylene-tetra-fluoro-ethylene).