The complex was initiated by the Seventh Emperor Severus in 206 AD and completed by Caracalla between 212-217 AD.

Emperor Caracalla felt the need to perpetuate himself through time like his predecessors had managed Trajan’s Forum, the Colosseum in Rome, and Phanteon among others. To achieve this feat required the Romans to put all their effort and a lot of money into building the largest center of baths ever known until then, the Baths of Caracalla.

Subsequently, other emperors, such as Elagábalo Alessandro Sever, complemented the work or the renovation. The building was destroyed by an earthquake in 847, although already from 537 it could not be used since the water channels were destroyed.

The complex could comfortably accommodate nearly 2,000 people at a time.

The Baths of Caracalla remained operational until 537 AD, when Catholicism prevailed and banned the use of baths as entertainment.

Several of the gigantic marble baths, carved from a single block, were moved to the center of Rome to be used as fountains. Its most famous sculpture, the group called “Toro Farnese”, is preserved in the Archaeological Museum of Naples.

Currently, the extensive ruins of these hot springs are a major tourist attraction. Although they were stripped of their sculptures and other treasures at an early date, there are still large fragments of mosaics, some of them corresponding to the top floor of the building, which collapsed.

In the third century AD, in the area where the thermal baths would be built, there was a large pond known as the Pool. When the bathrooms were completed and inaugurated, they were commissioned to replace the old pool.

The baths occupied an area of 13 hectares and were located at the start of the Appian Way. The main building was 228 meters long by 166 meters wide and 38.5 meters high.

Currently, the remnants of the complex are among the Viale Aventino (Aventine Avenue), and the Viale delle Terme di Caracalla (Avenue of the Baths of Caracalla).

The water was brought from the springs in Subiaco, 100 km from Rome, through the aqueduct Aqua Marcia and a special branch called Aqua Antoniniana.

The water arrived at an enormous cistern divided into 18 compartments and a capacity of 80,000 cubic meters. Thence, it lowered via gravity to tubes and crossed the gardens on its course to the building.

There were three networks of tunnels, made to facilitate the inspection and maintenance of facilities for water, drainage and storage timber, which was used by about 50 furnaces to heat the water.

The problem of supply was easily solved, but warm water was a more complex probelm.

The solution was in furnaces inside and outside, in which the slaves would be fanning the flames. Depending on the room you were in, the water was heated or otherwise cooled. To improve the dissemination of heat, a thermal system was used, quite practical and effective.

The Baths of Caracalla were born of the desire to perpetuate an emperor through history as someone important and powerful.

There already existed excellent temples as the Phanteon or complexes for shows such as the Colosseum in Rome, Caracalla chose to adjourn the largest bath complex known at that time.

The complex took almost all the Roman building techniques and displayed all of them very well.

The speed with which the project was completed, along with the ostentatious decor, was itself a symbol of the power of the emperor.

As important as the design was decorating.

In addition to the rich and vivid mosaics on the floors, the baths were decorated with valuable works of art, such as the Hercules or Toro Farnese.

The mosaics were not always the same design, in some areas accounted scenes, and other geometric patterns.

The northern area had a portico, preceded by a series of rooms on two levels, on which several shops were probably located. That portico and those rooms served as structural support for the hill Celia.

On the south side was the stadium, equipped with bleachers for spectators, which served to obscure the big tanks that had been placed behind them. These tanks could contain a total of 80,000 cubic meters of water. Symmetrically located, there were two major rooms than surely served as libraries.

In the east and west sides were built two large, symmetrical Exedra.

The central area had an apse, preceded by a colonnade, with small rooms on each side, one of which was built with an octagonal shape and covered by a dome.

The thermal rooms were designed symmetrically around the central axis of the baths, following the usual pattern of Imperial Rome. On both sides there were two entrances leading to the locker rooms or apodyteria, which had a central corridor leading to two rooms on each side with barrel vaults.

The changing rooms were available at the arena (gymnasium) to practice physical exercises indoor or outdoor. Users did gymnastics exercises or practiced hand to hand combat. The area was covered with a large courtyard, surrounded on three sides by porches, with a vaulted ceiling and mosaic floors. On the other side a wide semicircle. At the end of exercising, the Romans could go to the baths, jointly used by both sexes.

The caldarium was an enormous circular room covered by a dome, which was supported by several columns. Here, people could take hot baths. The room was designed and situated inside the complex to receive sunlight throughout the day by a few large windows.

From the caldarium bathers would proceed to the tepidarium, where there originally were two large tubs on both sides for taking warm baths. At the center of the building was located the Basilica, covered by three major cross vaults, supported by some impressive pillars.

The frigidarium was the last room that could be accessed, for taking cold baths. It was a large outdoor swimming pool, today would be considered an Olympic swimming pool, which had one of its walls at the front of the exterior facade, decorated with statues in niches. 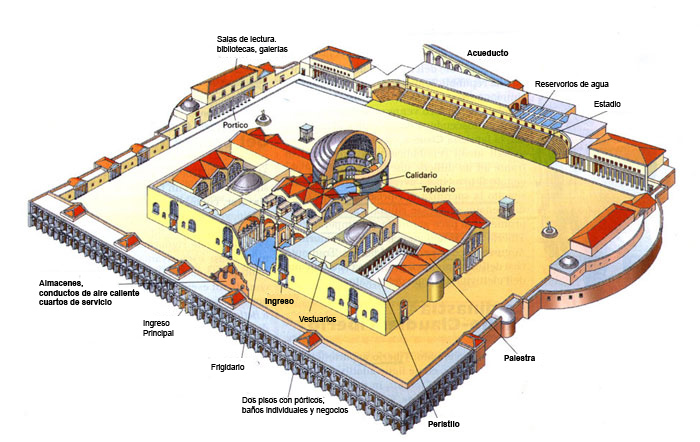 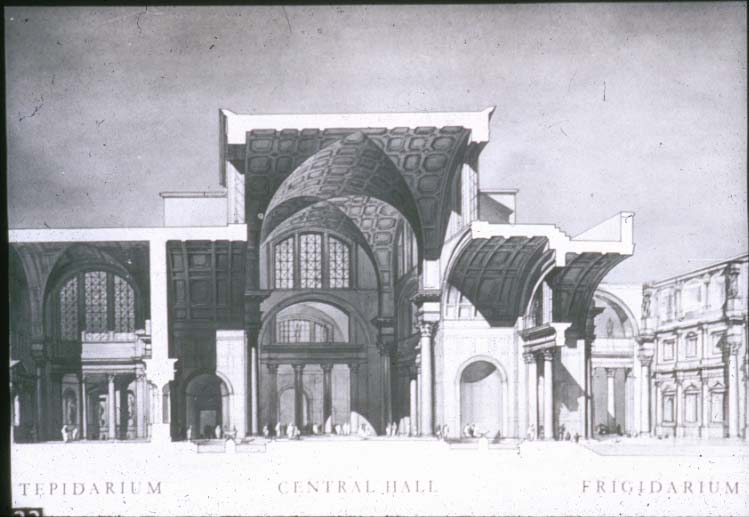 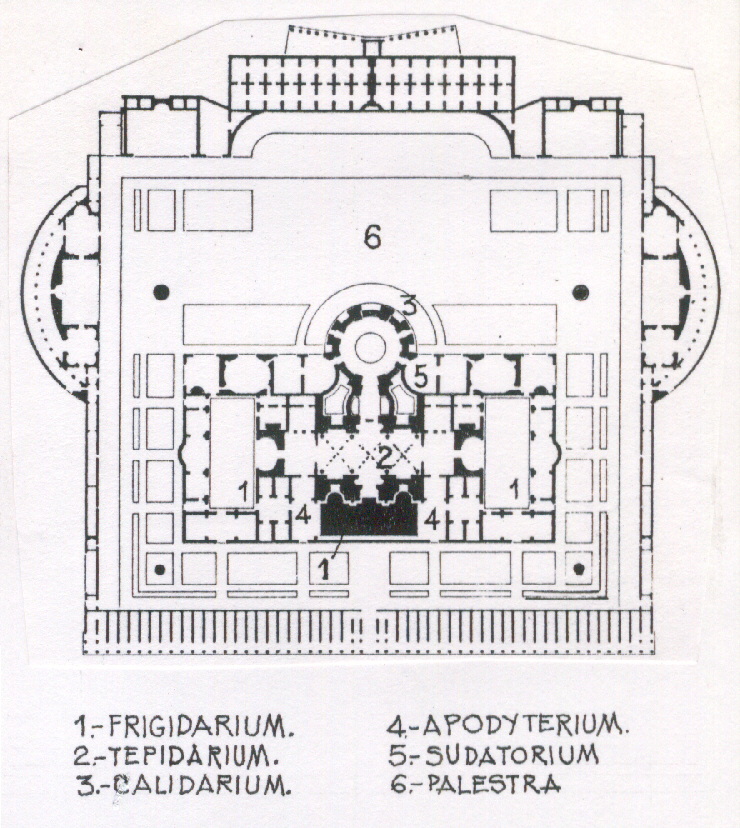 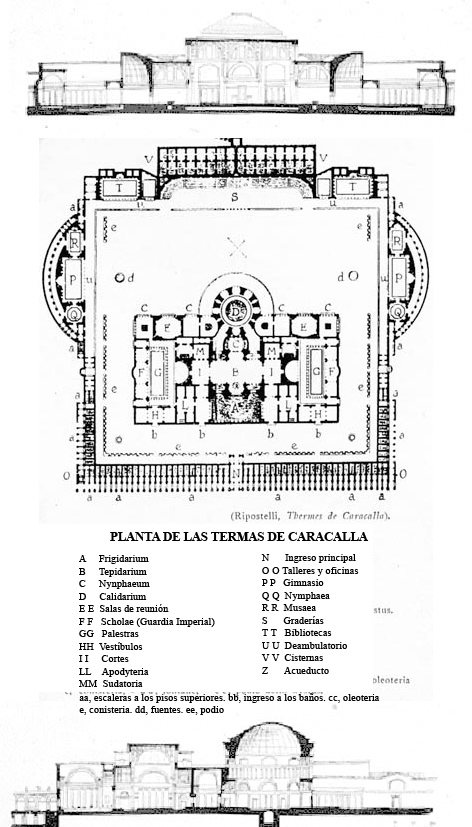 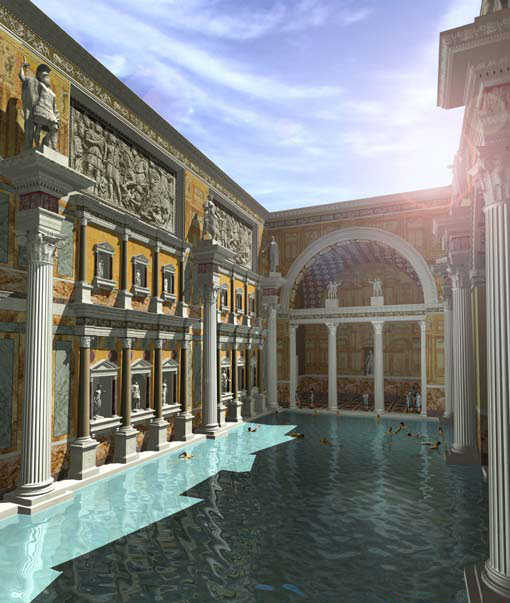 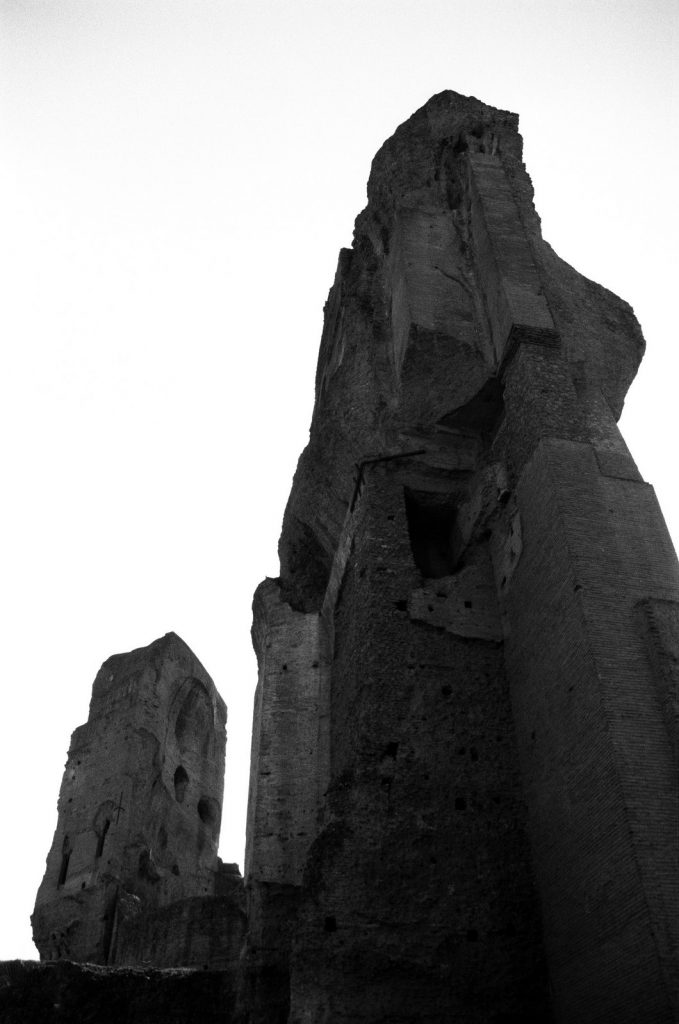 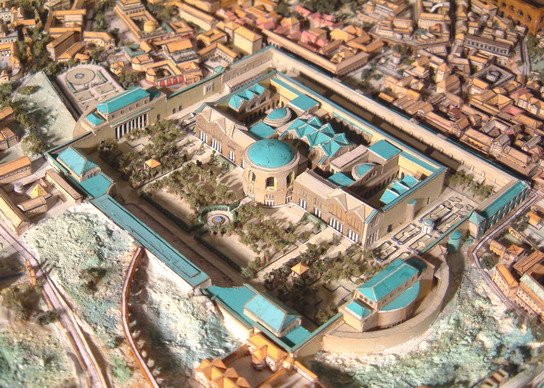 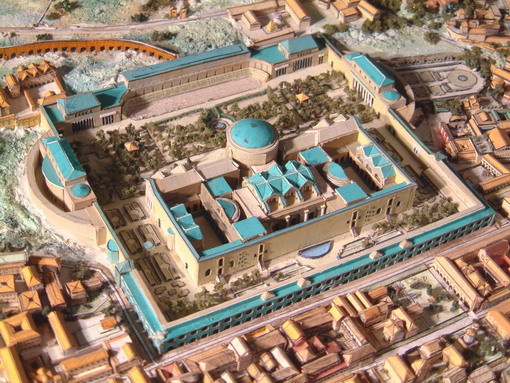 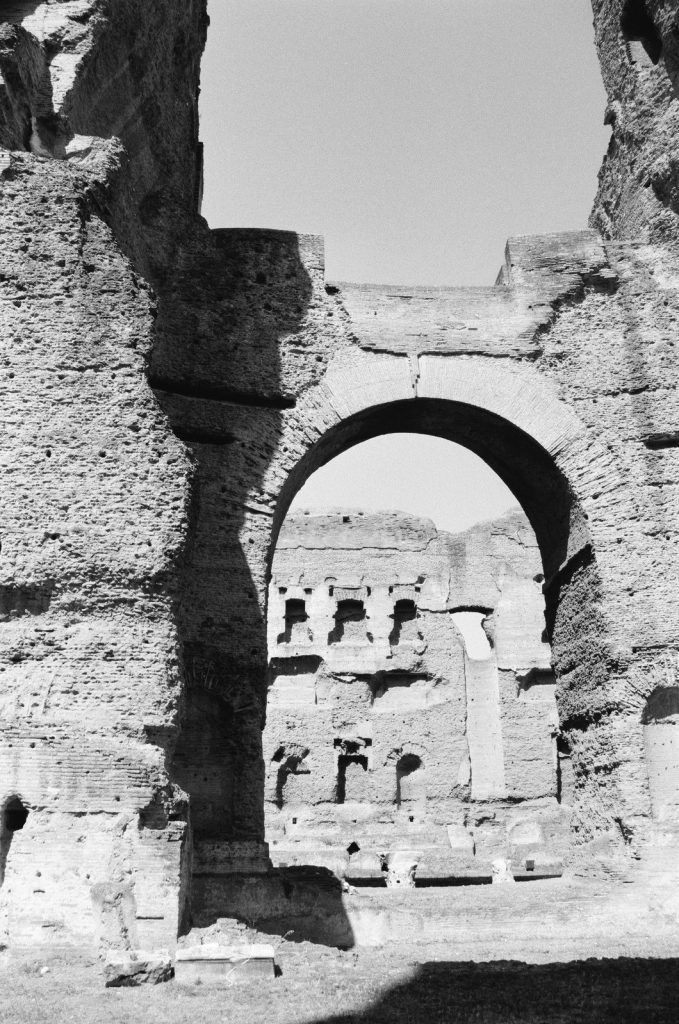 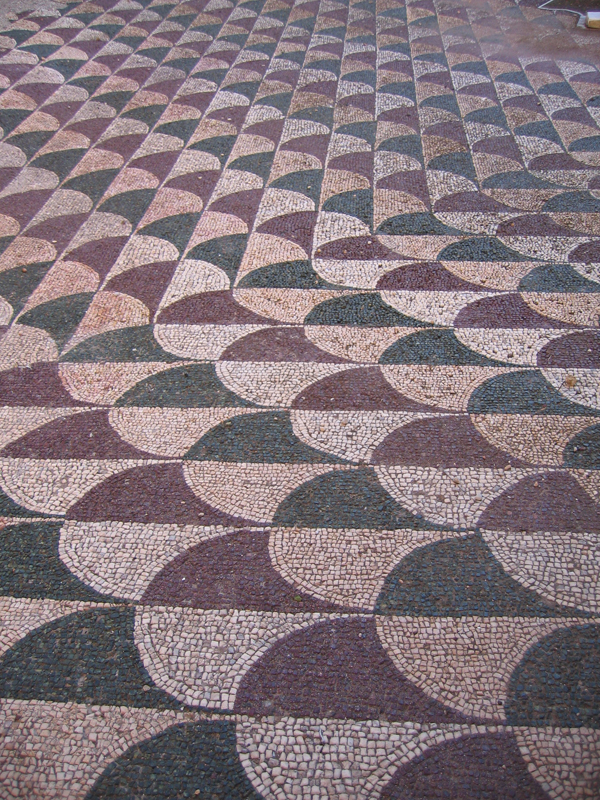 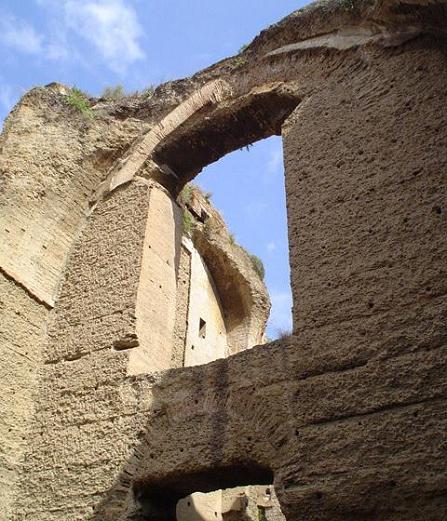 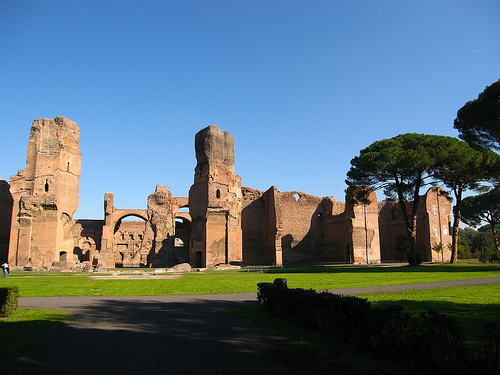 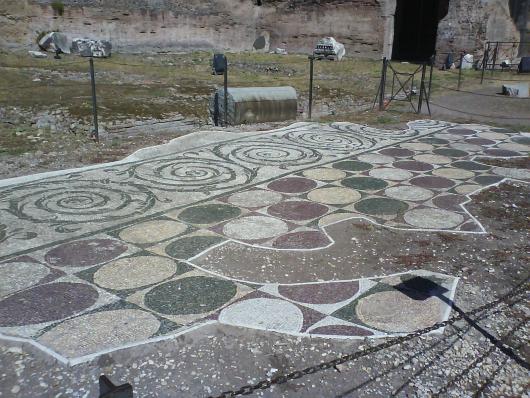 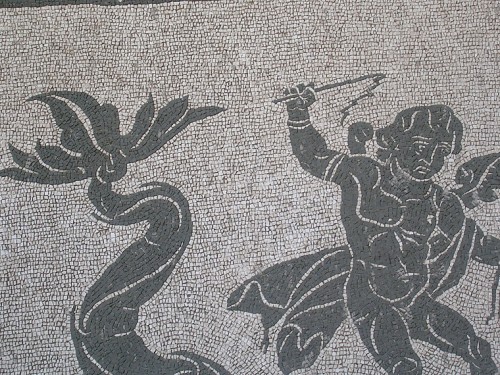 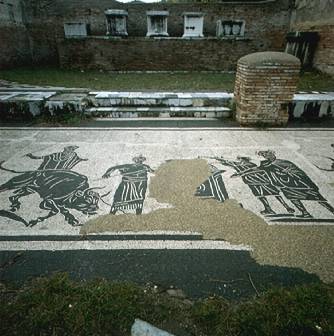 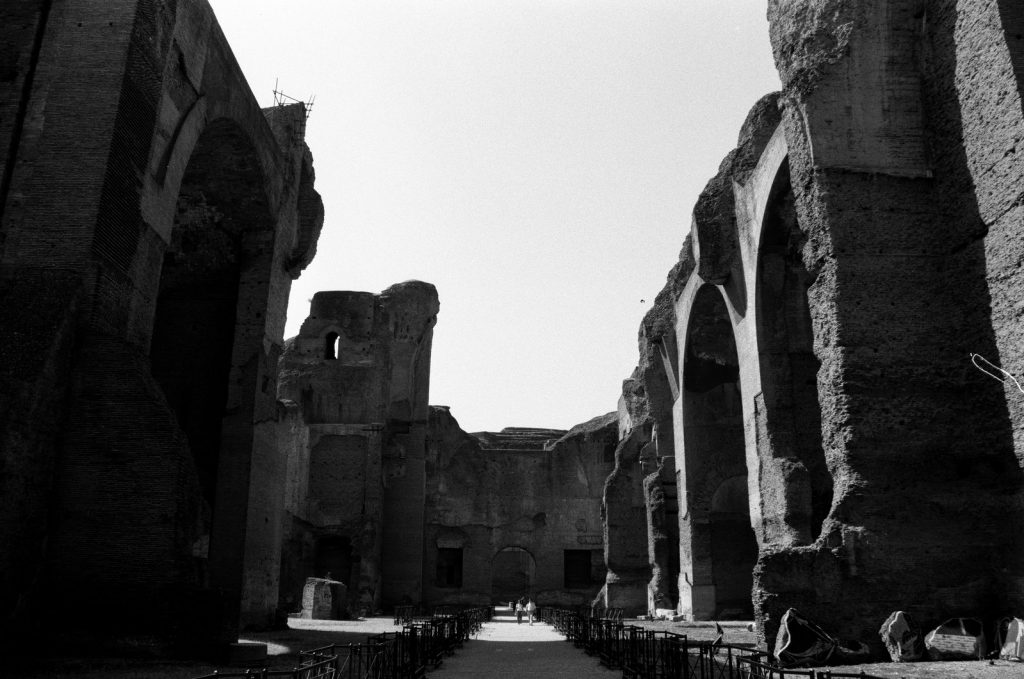