To mark the bicentenary of the French Revolution, the French President at the time, Francois Mitterrand, convened in 1983 an international competition in order to design a new opera for Paris, the Bastille Opera House, which would be located in the Plaza del same name, with the historic “July Column” as a framework.

Until that time the French capital offered performances characteristic nineteenth century building known as the Palais Garnier or Paris Opera in the IX district of the French capital, whose construction was commissioned by Napoleon III to the architect Charles Garnier. Since 1875, when it opened, was called Opera – National Academy of Music, until in 1989 the Opera Company moved to the new building of the Bastille, staying in the old Academy building. Despite the transfer is still called the Palais Garnier Paris Opera popularly and both buildings are complementary.

Among the 744 projects submitted was winning the draft submitted by the architect Carlos Ott, project specific function in addition to its proposed new life to the neighborhood, and whose construction began in 1984 must be completed for the celebrations of July 14, 1989. 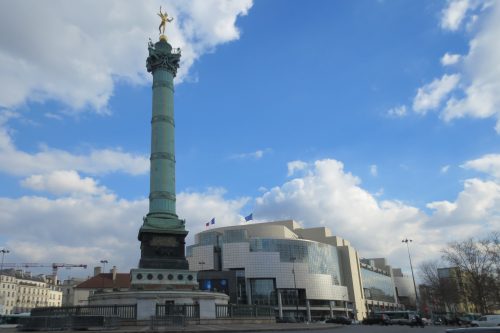 The new Opera House was located at the Place of the Bastille, historic Plaza where the July 14th, 1789, the French Revolution took place, resulting destroyed the fortress of the XIV century. The main entrance is via the Rue de Lyon 120, 12th District, Paris, France. For its construction was necessary to close the station with the same name dating from 1859 and demolish an old exhibition hall for contemporary art located on site.

Due to the great success of the opera by the public, the Palais Garnier was insufficient, it was the Paris first building dedicated to these events in particular, reason that led to the then president of France conceive the project of creating a new space that would complement the Opera and classical existing permit while creating a modern space not only architecturally but also technologically sound level, sound, lights and all the advances available for a show of this nature.

The National Opera of Paris, is a massive structure, 80m high, 50m above graund and 30 underground, with a curved and glazed exterior facade, each level consists of 22,000 square meters. The building occupies an area of ​​150.000m2 and features numerous spaces accessible to the public:

The largest of the auditoriums, 1200m2, 20m high, 32m deep and 40m wide, offers 2,750 seats with a view of the stage always free, without any restrictions. The seats are distributed on the ground level, two levels of balconies retracted in the back and four levels of galleries in each of the sides. This room that has a glass roof has a removable and adjustable orchestra pit can accommodate 130 musicians, moat may be covered under the requirements of the assembly.

The main stage is 45 feet high, is 30 meters wide and 25 meters deep. It has 9 lifts that create various levels. The three main lifts bring the landscape from below the stage. There are four storage areas of the same dimensions as the stage, which are used for testing and between racks has a turntable, which allows two productions at once. 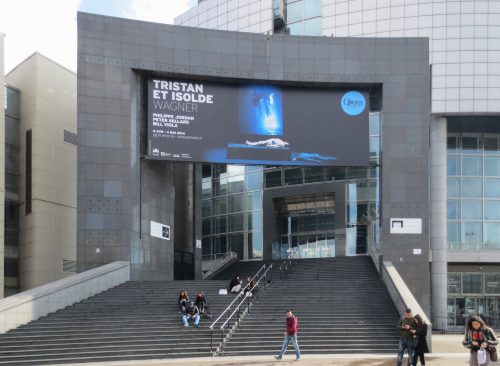 The building also features workshops, studies that tested for both functions in the Bastille or the Opera Garnier, the first mainly used for large scale operas and ballets leaving the former palace. Nevertheless the Bastille Opera offers scenarios for smaller events such as chamber music and recitals.

The architecture is marked by transparent facades and the use of identical materials in both interior and exterior, especially reinforced concrete, glass, granite, aluminum, stone and marble.

In the construction and decoration of the main auditorium has been used Lannelin blue granite from Britain, China pear wood and glass roof. On the walls of the amphitheater has been used white breccia marble, from Verona, to ceiling height as in the study, although the latter was combined with pear wood.