Built in memory of Saturninus, the first bishop and martyr of Toulouse, who lived in the first half of the third century, the basilica was consecrated in the year 1096.

The church is located in the French city of Toulouse and belongs to the style of great pilgrimage churches, so called because they were built along the pilgrimage routes leading to Santiago de Compostela, in the northwest of the Iberian peninsula.

The church was built to accommodate a large crowd in its long nave and transept.

Toulouse is a city relatively far from large metropoli. It is the capital of Midi-Pyrenees, and has a history rooted in the days of Rome and the barbarian kingdoms.

Toulouse was the capital of the Visigoths in a kingdom which stretched from Spain to southern France, and in the middle was one of the most important religious points on the road to Santiago; the route remains and churches are the footsteps.

This church was one of the most important shrines of pilgrimage on the road to Santiago de Compostela, whose cathedral bears a remarkable resemblance.

In the Gothic and Renaissance periods the Basilica was partially rebuilt, and in the nineteenth century was restored.

The cloister and the abbey were destroyed during the nineteenth century, and some of its remains are preserved in the Museum of Augustine. 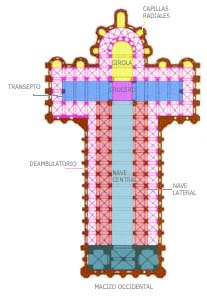 The central nave is flanked by two smaller naves on each side. The interior of each of them continues along the transepts and into the apse. At the crossing between the nave and the transept, an octagonal tower rises from the Gothic period. The apse culminates with five radiating chapels. The nave has no direct light, illuminated by the arches of triforium situated in the upper gallery. In the choir, a bell tower stands 64 meters high, octagonal in form, which houses 24 bells.

In the crossing is an octagonal tower which rises from the Gothic period.

In the ambulatory, a gallery gives a path for the pilgrims to have a tour without interrupting the masses, entering on one side of the church and exiting by the nave opposite.
This does not interrupt the other functions of the church.
Following the ambulatory are the five axial radiating chapels.
This wide gallery is formed, apart from its semicircular shape, by two sections of the nave with a barrel vault.

The central nave is covered with a barrel vault, supported by square pillars that directly take the force of the vault.

The aisles or side naves are covered by edge vaults.

The triforium is covered in quarter-barreled vault that counteracts the vault of the nave.

The ambulatory, crossing and apse have quarter-dome vaults.

The Basilica is not covered in sculptures, for in this area the churches are much less lavish. The details are in the capitals that are filled with biblical scenes and matters sacred and profane.
It is constructed of humble materials: hand-made red brick, due to its remoteness from the stone quarries.