The Basilica of Saint Ambrose (Sant’Ambrogio in Italian), originally called Martyrs Basilica in honor of Christians martyred during the Roman persecutions and buried in the area where the basilica was erected, was commissioned by the bishop of Milan, San Ambrosio between the years 379-386. When the same Ambrose was buried in the basilica, he was changing the name.

Its sleek design has been considered one of the most important examples of Romanesque architecture of Lombardy. This is seen in the two bell towers, the facade long and low, the porch and red brick construction.

Over the years it was restructuring and adding new designs to its architecture, just between the years 1088 and 1099 took its final by order of Bishop Anselm, who sent it to rebuild following the layout of Romanesque architecture.

In this century the bishop Angiberto II did add the apse, preceded by a barrel vault, under which were held liturgical celebrations. During the same period, the apse was decorated with a mosaic, the Redeemer to the throne among the martyrs Protasio and Gervasio, with the archangels Michael and Gabriel, together with two episodes of the life of St. Ambrose.

It added four spandrels decorated with stucco to existing early Christian art ciborium and placed beneath the altar of St. Ambrose.

The tiburio was added at the end of the twelfth century but soon collapsed in 1196, then rebuilt with their particular arrangement characterized by external galleries with superimposed arches on two levels.

The Basilica of St. Ambrose is located in the center of the city of Milan, Italy, in Piazza Sant Ambrogio No. 15.

With respect to the original church, the new basilica after 1174 inherited the plant carefully: three naves, apses and portico above the building.

The three ships were divided into three bays square, especially with arched vaults and onto a header with three chapels staggered.

In the transept stands a dome over horns over a ciborium which has four scenes with four trapezoidal faces of three characters each. In the front and looking at the faithful Christ giving the law appears to Saints Peter and Paul.

The internal floor of the basilica is longitudinal and has the same dimensions of the frame, excluding the apse of the measures.

The atrium, a rectangular shape, is surrounded by a portico of composite columns. The facade is long and low, with, on one of the galleries of the court that serves as a porch, a very open forum with five arches that increase in height staggered along the slope profile.

Another lower grandstand with three equal arcs joins the internal perimeter of the porch. On either side rise two towers decorated with Lombard bands.

It originally had the role of collecting groups of catechumens next to the church, but with changing habits and lost their original function eventually used as a meeting place discovered. 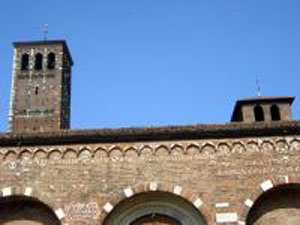 The porch is enclosed by four walls, hence the name. Inside has arches supported by pillars surrounded by semi-columns. The cornices are supported by Lombard bands similar to those of the facade.

The Basilica of St. Ambrose has two towers that house the bells and frame the facade.
The tower on the right side called “dei Monaci” (the monks), the eighth century, has the austere look of the defense towers.

The left tower, called “dei Canonici (the canon), dates from 1144 and stands to be the highest.

In Sant’Ambrogio in Milan, the interior of the nave was structured vaults square profile. The vaults of the aisles between the columns of the same size with half a side of the nave between the columns, pillars are supported and sustained minor women’s gallery. The latter occupy the entire space for the clerestory

The church takes the basilica with two aisles, no transepts, and open to a header with three semicircular apses. The elevation with tribunes and the expansion of the ribbed vaults throughout the building announce, however, new models of Romanesque architecture. 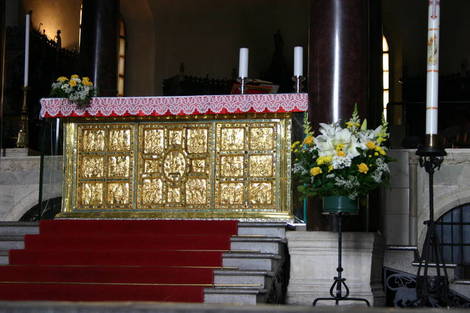 The construction material used in the building is simple, from the area, mainly bricks of different colors, stone and white plaster, contrasting with the richness of interior decoration.

The altar of St. Ambrose, a masterpiece of Carolingian gold is decorated with gold, silver, precious stones and enamels

One of the most important is the century mosaics V: on a gold background we see the figure of Christ Pantocrator, surrounded by the martyrs Gervase and Protasio and the archangels Gabriel and Michael

Inside is a beautiful Romanesque-Byzantine pulpit and an altar frontal plates coated with gold, the masterpiece of the Carolingian period s. IX.