The Baptistery of San Giovanni is one of the oldest and most revered buildings Florence, and has always held a special place in the history of the city. Interestingly, even today the date of its foundation is uncertain, although it is generally considered to have been built in the sixth or seventh century or even in the IV or V.

The oldest parts of the current building dates back to the 4th century, when St. Ambrose, bishop of Milan, established him as the first Basilica of San Lorenzo (393 AD) originally being a basilica, not a baptistery, and the IX He became a cathedral. We know that in 1059 served as the cathedral of Florence.

In times of Dante claimed to have Roman origins and the Florentines, emphasizing the intention of the city to show off a glorious past, they rushed to support this claim, and it was this building chosen as representative works of the early “Renaissance “in Florence.

Art historians often based on the date of the contest held in 1401 for the construction of the second set of bronze doors for the Basilica as the starting date of this great artistic movement, this honor went to Lorenzo Ghiberti. Two test panels from the proposals submitted by Ghiberti and Brunelleschi, are exhibited in the Bargello Museum.

It was once thought that this building, now devoted to San Juan Bautista, was originally a pagan temple dedicated to Mars.
Excavations have revealed that it was built on Roman foundations dating from the first century AD.

This Baptistery of San Giovanni is housed in the San Giovanni Square, opposite the Cathedral of Santa Maria del Fiore, Florence, Tuscany, Italy.

The Baptistery is an octagonal building with a centralized plan derived from Byzantine models, with a large dome exceptional.

The exterior decoration was funded by the “Art of Calimala” the most important medieval guild of the city, represented by textile importers.

The design became a prototype for the later construction of numerous religious buildings of the Tuscan Romanesque style, including Santa Maria Novella and San Miniato in Florence Monte.

Both rectangular scarsella, which replaced an apse semicircular, and the white pyramidal roof that hides the dome, are particularly unusual architectural features probably also form dating from the thirteenth century, although the flashlight crown the building was made in the twelfth century.

The building is famous for its three sets of gilded bronze doors in three innings.

Now used as an output, this gate was made by Andrea Pisano in 1336. A few years later he took over Giotto, architect of the nearby bell tower, where he worked on the decoration. 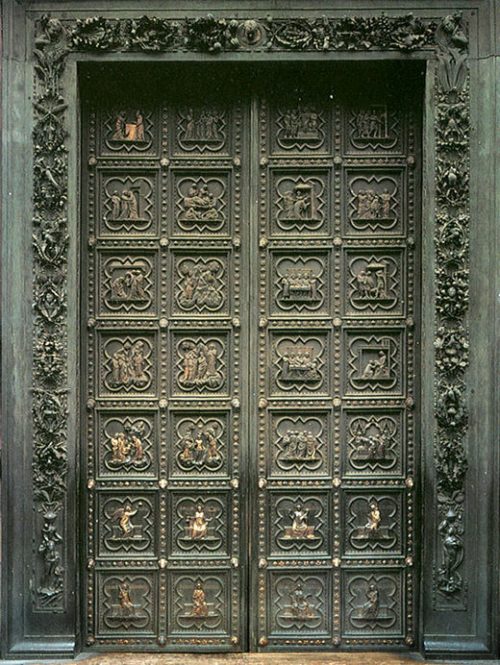 Andrea Pisano, was separated from the somewhat affected elegance of the late Gothic period.
His work is extremely simple, avoiding garments adorned and exaggerated poses, gestures and adopting simple expressions. He wanted his compositions stand out by insignificant details.

The door has 28 panels with reliefs nicely framed in a Gothic framework and illustrate the history of San Juan Bautista and the cardinal and theological virtues: faith, hope, charity, prudence, fortitude, temperance and justice.

This door was first installed at the main entrance opposite the cathedral, but in the fifteenth century was moved to its current location to make way for the doors of Lorenzo Ghiberti with more elaborate decorations, brass frames were developed by the son Lorenzo, Vittorio.

Above the door there are bronze figures of St John the Baptist and Salome from Verdugo works Mannerist sculptor Vicenzo Dante, 1571. 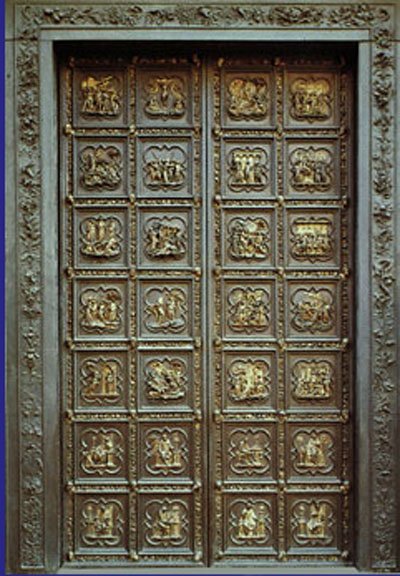 This gate is now used as input, was made by Lorenzo Ghiberti, 1403-1424, again is divided into 28 panels and Gothic frames were copied from the first gate Pisano.

A chronological sequence of scenes from the life of Christ begins at the door on the left in the third panel of the lower left and runs right to the top. The lower two records represent the Evangelists and Doctors of the Church. A self-portrait of Ghiberti himself, on the fifth panel, at the top of the left door, wearing an elaborate hat. The exquisite decoration of the frames is also the work of Ghiberti.

The bronze statues on the door, 1506-1511, depicting the preaching of John the Baptist, the Levite and the Pharisee are by Francesco Rustici, but, according to Vasari, Leonardo da Vinci was responsible for the design of this group of three people.

“Around Mil, an inlaid marble plaque representing the zodiacal circle was placed near the door of the North.” According to the testimony of Filippo Villani (14th century) on the basis of “old memories”, the center of the zodiac was touched by the light only on the day of the summer solstice (June 21), when a ray of sun, noon, he entered through the Eye of the dome.

This is the most famous work of Lorenzo Ghiberti, and it took most of his life to finish, from 1425 to 1452. It is said that Michelangelo called the “Door of Paradise”.

The ten panels contain reliefs with themes of Scripture, the design of this door is probably due to contact with the humanists Ghiberti.

The pictorial reliefs, are no longer limited to a Gothic frame, but show great detail every episode. They are exquisitely carved with bas-relief scenes that are lost in the bottom of the panels. The use of perspective is very important and typical of the new conception of Renaissance art.

They were made in the Nª1 of Via Bufalini, a plaque marks the spot Ghiberti’s workshop. These doors were replaced with a copy that is pulled by molds of the original in 1948 and the original panels were exposed in the Museo dell’Opera del Duomo, after its restoration.

Topics, from top to bottom and beginning with the panel on the left, are: 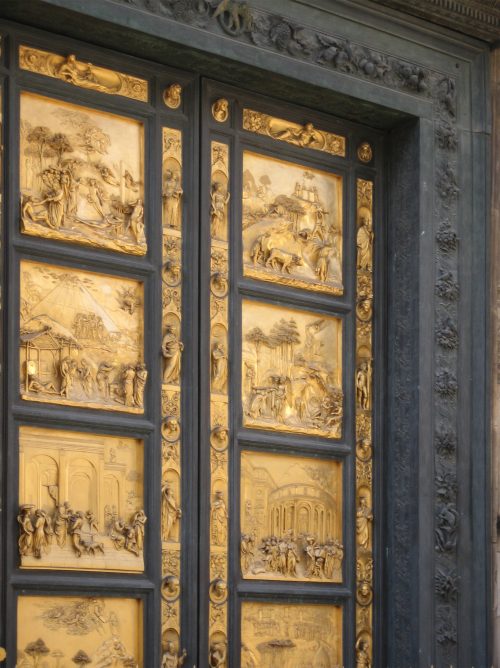 Around the reliefs they were placed 24 statues of prophets and sibyls, and 24 medallions with portraits of Ghiberti (the fourth from the top of the middle row on the left) and its major contemporaries.

Above the door the sculptural group of the Baptism of Christ by Andrea Sansovino initiated in 1505 and completed a century later by Vincenzo Danti, is a mold of the original now in the Museo dell’Opera del Duomo.

The former interior marble (north gate) has the enormous columns granite of a Roman building, with gilded Corinthian capitals under a cornice and a gallery with split windows
The walls are lined with panels of white marble divided by black bands in the dichromatic style of the exterior. 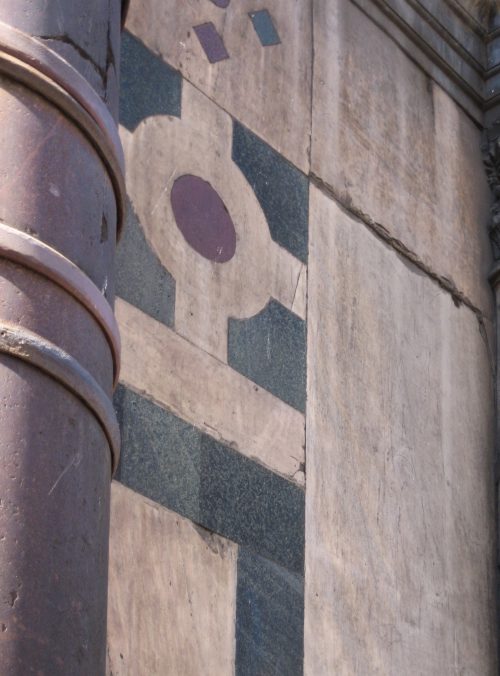 As shown in the ground, the center of the building was designed to be occupied by a huge octagonal fountain. The fountain was dismantled in 1576 and the oldest part of the splendid mosaic pavement can be seen around the present Gothic font.

Along the beautiful altar, rebuilt in the XIII century, a complex Paschal candelabrum seen XIV.

On the right is the tomb of the Antipope John XXIII is one of the first Renaissance tombs of the city, and apart from the exquisite carving, is particularly notable for the way it is inserted into a narrow space between two large columns Roman not in any way disrupt the architectural harmony of the building. Donatello and Michelozzo were commissioned to design the monument.

To the left of apse two Late Roman period sarcophagi adapted as tombs, one scene shows a wild boar hunting and the other adapted as a tomb of a bishop in 1230, depicts scenes of life Rome.

The small vault is decorated with an elaborate mosaic representing a wheel with the figures of the prophets, surrounding the Agnus Dei. This conference is supported by four caryatids kneeling on Corinthian capitals. On either side are the throne of the Virgin and San Juan Bautista.

In the first arc half figures of saints accompanying a stunning image of the Baptist they are appreciated, and in the soffit, or arc abroad, a frieze of saints in niches. 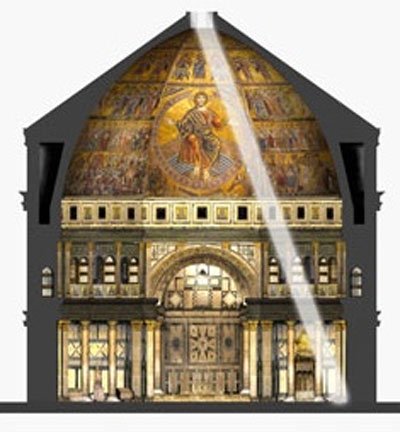 A beam of light on the roof

In the three sections closest to the altar the Last Judgment is seen with a huge figure of Christ, 8 meters high, on a central tondo. The rest of the section of the dome is divided into four bands:

In 1202, the old apse semicircular was replaced by the current rectangular scarsella. As a whole, the building is a good expression of Romanesque architecture in the city.

The dome was covered with a flashlight and restoring the floor in the thirteenth century, we proceeded to the “dismantling” of this first extraordinary astronomical monument. Like the cathedral, also it has a roof designed to focus a beam of light on the equinox and seems to be still in operation. It seems that each of the main churches, palaces or laboratories, including the Uffitzi, Santa Maria del Fiore and the Baptistery are all great sundials. 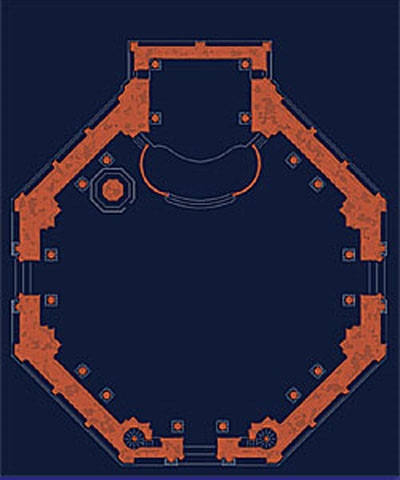 Using an octagonal plane in which plates white and green marble from Prato face, the Baptistery is surmounted by a dome with eight segments that are based on the perimeter of the walls, masked from the outside by increasing the walls on arches second level and by a pyramidal roof flattened.

This fascinating and complex structure has created many problems when concretely dating the time of its construction.

Outdoor classical geometric decoration was carried out between XI and XIII using precious marbles, white from Luni, a Roman town in Liguria across the northern border of Tuscany, and green near Prato.

Bronze was used to decorate doors and statues found on the North Gate.

The mosaic floor is made of square and contemporary with beautiful floor tiles San Miniato, includes geometric designs, oriental motifs and signs of the zodiac.

The mosaics of thevault, the only mosaic cycle that exists in Florence, are very well preserved and beautifully illuminated.

The first are the “scarsella” on the altar, and are signed by the monk Iacopo, a contemporary of San Francisco. It took more than a century to complete the work and show a strong Venetian influence. It is believed that Cimabue, Coppo and the young Giotto also worked on execution.