Sir Norman Foster presented a project for a series of cabins to be used as a tourist resort.

Its strengths are the large buildings, business structures, masterplans, airports (such as the giant one opened in Beijing during the Olympics), theaters… but this work allows one to see Foster’s nearest habitable design at the human level. Designed for relaxation and comfort for the occupants, these houses make us dream of fresh and natural luxury design, idyllic holidays with bamboo and timber from a turquoise sea.

The site that inspired this work is none other than Mauritius. Officially the Republic of Mauritius is an island country located in the southwest Indian Ocean, 900 kilometers from the east coast of Madagascar and about 3,943 kilometers southwest of India. Apart from the island of Mauritius, the republic includes the islands of St Brandon and Loaded Carajos, Rodrigues and Agalega Islands.

The Banyan Tree Corniche Bay, a complex issue, is as its name suggests. Corniche Bay is in the south west of the island of Mauritius. The luxury resort will be immersed in the rich tropical vegetation of the area, with an unbeatable view of the mountains of Morne Brabant, a natural site that is part of the Unesco World Heritage Site.

The coast that the project will face is one of the most beautiful in the world and is made up of coral reefs.

Natural materials, water and vegetation are the dominant elements of the project, whose inspiration in the principles of sustainable architecture is to be understood. The designers explain this not only in terms of energy saving, but also in terms of its relationship with the natural landscape to accommodate the new structure.

The different volumes are connected by corrugated roofing in natural wood, whose geometry allows maximum natural ventilation, in addition to consent to the collection of rainwater for recycling. Moreover, solar energy will be used to allow operation of electric vehicles for shipments within the resort.

“Our plan for the new resort on the Corniche Bay Summerfield,” says David Foster & Partners Studio, “combines luxury with innovative environmental strategies that preserve the undisputed dominant role of the natural landscape. We have chosen to use local materials and have highly integrated systems of energy efficiency so that luxury can be transformed into energy self-sufficiency.”

Intimate luxury in the middle of the forest. As explained from the official site of the enterprise, “Banyan Tree Corniche Bay is the new definition of life in an exotic island: individual cabins in the mountains covered by a hectare of gardens that are perfectly designed with uninterrupted views over the Indian Ocean.”

The concept on which the architects worked was “discretion and ambient intelligence,” to reach a haven of luxury, but that is inserted harmonically into the landscape.

The complex also features a spectacular golf course designed by Gary Player, and the Banyan Tree Hotel and Spa, in the resort on the sea.

The inspiration for the architecture of the cabins evolved from a single line which is then transformed into an infinite number of curves to reflect the topography of the land. There are six types of cabins, all connected through the common language of the ceilings, creating a family of uniform design. They have a total area of between 540 and 930 m², and all the cabins are located on lots between 0.8 and 1.25 hectares.

Among its amenities, the rooms are equipped with individual swimming pools, whirlpools, yoga decks, home theater outside the rooms connected to the main pool, and have a bathroom with sauna and spa, plus rooms for reading and relaxing.

I1 dwellings are simpler but no less comprehensive. Its name comes from its simple, single longitudinal axis and a corridor.
Its plan area of 279 m2 is bordered by more than 110 m2 in terraces.

The corridor is divided into 8 modules, including 6 which are the major functional spaces above and 2 smaller spaces that serve as transition. These modules transition between the bedrooms and the areas of daytime activities, one does this through a landscaped courtyard, which ends with a jacuzzi and the other hosting access to a pool of water that communicates well with outdoor pools.

On the side on which the house opens, we find a large terrace, partly covered by the same deck that covers the housing. A small portion of the roof is clear and creates a space independent of the rest of the house, a table for meals may be placed outside and from there you can see the whole house from a different perspective.

I2 housing type are only a slight variation on I1.

The only changes to its twin sister are manifested in the two bays for smaller transition spaces.

The first follows the pedestrian access and hosting the pond, although this is no longer connected to the main pool. At the bottom of this bay, in this case, are the jacuzzi on the terrace front.

The second of the transition spaces no longer contains an interior courtyard garden, but in this case contains the main pool of the house that runs from the interior to the exterior dividing the main terrace. Part of the main pool is covered by the roof of the house and part is outdoors.

We could divide the plant, this time not in the corridors, but in two installments of the “S”, the concave and convex, articulated by the inflection point where there is access and a small pond. The two concave perimeters lead to two circular buildings, on the access side of this building is a small roundabout permits maneuvers necessary to vehicles and the side view corresponds to a circular pool. These two buildings are embraced by the special forms of housing.

The two wings of the house are related by a movement which runs through the perimeter given to the views and that is actually twice as large inside the house and outside as it is on this side where there is a large covered porch that runs the length of the house from end to end.

A small area away from the house hosts the summer dining and offers unique views of the housing.

U1 dwellings are, so to speak, more fragmented. They have a covered area of 116 square meters and are not in the form of a “U”, as is defined as a classical sense, with three wings that open onto a central courtyard, but rather as a quarter circle that puts one side outside.

Meanwhile, inside the side of access, there is a roundabout to allow vehicles to approach the house. The center of this round coincides with the center of the imaginary range of which the housing is a segment.

And in the interior spaces are the same as in the other two houses, organized as spaces of transition. The first entry is a large pond that culminates with a view over the outdoor pool and a terrace or second relaxation space with a jacuzzi.
Between these two areas is the social area of the house while the ends of the house are the bedrooms, one on the side of access and three more from the roof deck.

The entire outer perimeter of the fan is, as in other homes, protected by a wing which is under a porch that extends along the entire facade and defines, in part, the other side by the outdoor pool.

The U2 homes are a very small variation on the U1. Its surface is the same, as the program develops in its interior.

The only differences are found in the access and the pool.
In terms of access, there is not the roundabout approach that allows the vehicles but they must be parked at a distance and the house is accessed by a winding road.
The pool this time is moved to the perimeter of the porch area of transition from the covered terrace, with an outdoor pool with deck area and uncovered area.

The main difference in the house “T” of 212 square meters of covered area is given by the access that is formed on an upper level, where there is also parking and service units. However, down immediately to the ground floor, and having crossed a main gateway, you enter into the space to the house.

This house is actually two houses, or a house and half. “Accessed by a central covered volume but open where there is a pond, pool and an outdoor space of. All articles connected by a central piece, is a tree that rises as a drilling deck and creating a ‘backyard’ in this already ‘courtyard’ of the house.”

On one side of this volume is a small central module, a virtually independent secondary bedroom, bathroom and living room that requires the other module for cooking food.

Across the central module is the main dwelling, juxtaposed with the different environments, beginning with the kitchen area, dining area, lounge, courtesy laundry and bathroom and followed a second room with some privacy and three bedrooms with their own bathrooms.

Altogether this is a house with 4 bedrooms, with the convenience that one of them becomes more independent from the rest separated by a large outdoor space.

We find again in this type of housing the front porch of the house across the way.

In its effort to mimic the environment, the housing structure is designed like wooden huts built by the Indians in the wild.

Foster dwellings are, however, far from the wild huts. In regard to short vertical enclosures it must be said, the cover is what first draws attention and captures our interest.

It is as rolling, twisty, and organic as the forest that surrounds it. Wooden beams are placed with different inclinations allowing them to create a regulated area. It is inevitable that we remember these forms from the school designed by Gaudi for workers’ children of the Sagrada Familia.
The interior is covered, generating dynamic spaces with different heights and escaping to the outside, bringing the inside in contact with their environment.

Due to the isolated situation of Mauritius and also to create a link between the landscape of the place and the new buildings, they were constructed as closely as possible using indigenous materials as far as possible.

These materials also create this link between the island and the nature of housing for the smooth aging buildings and the materials are prepared to withstand the weather conditions in the area.

The main material is wood that solves the vast majority structure and covered. Water is the second element that is present in all corners of the project once again promoting the integration of their homes with natural wild. 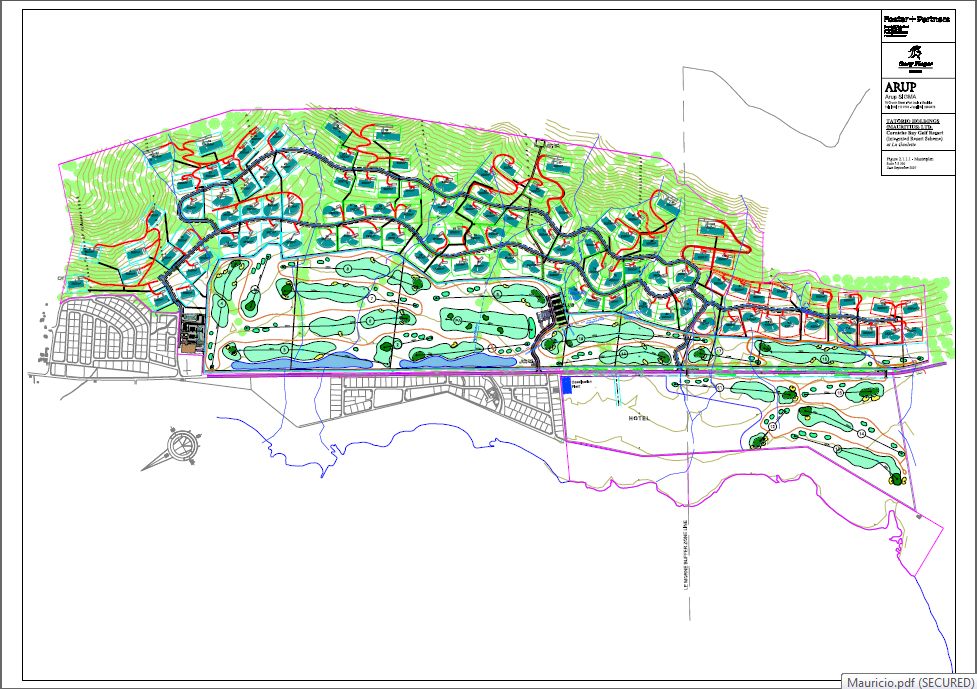 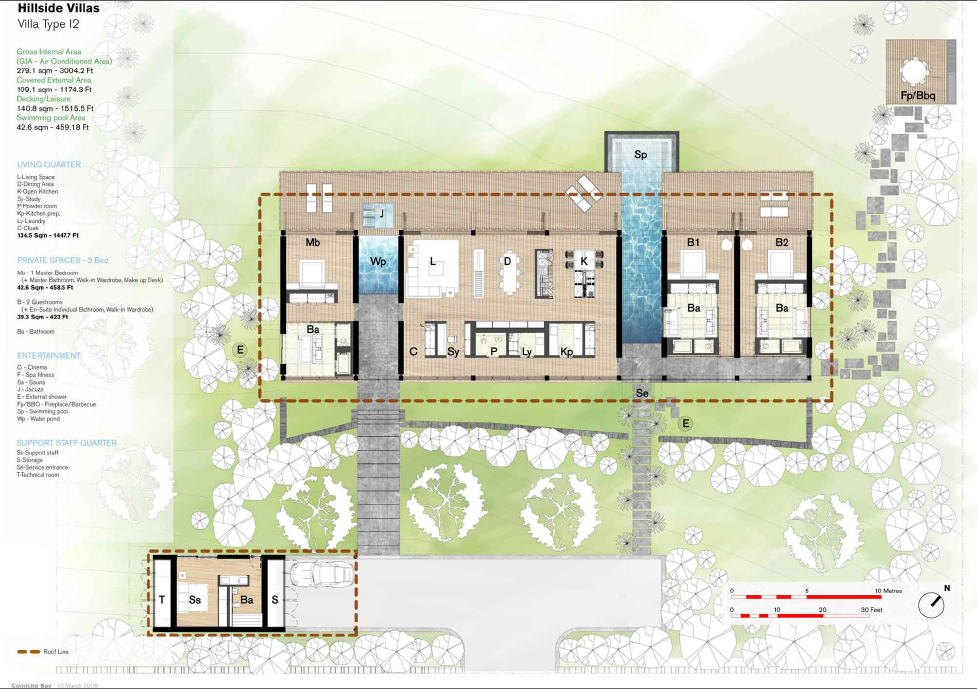 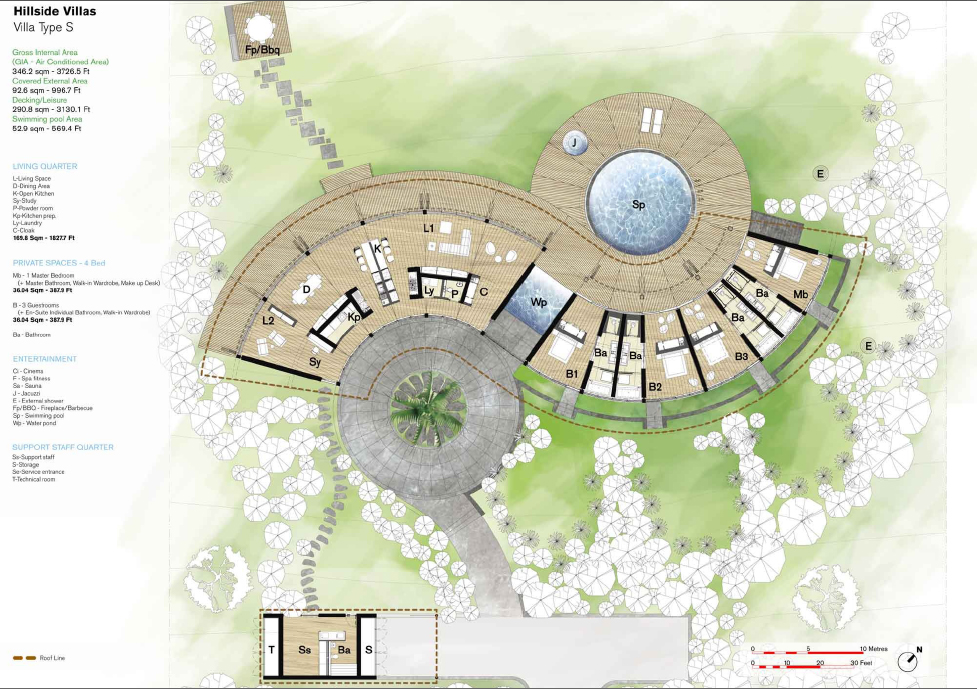 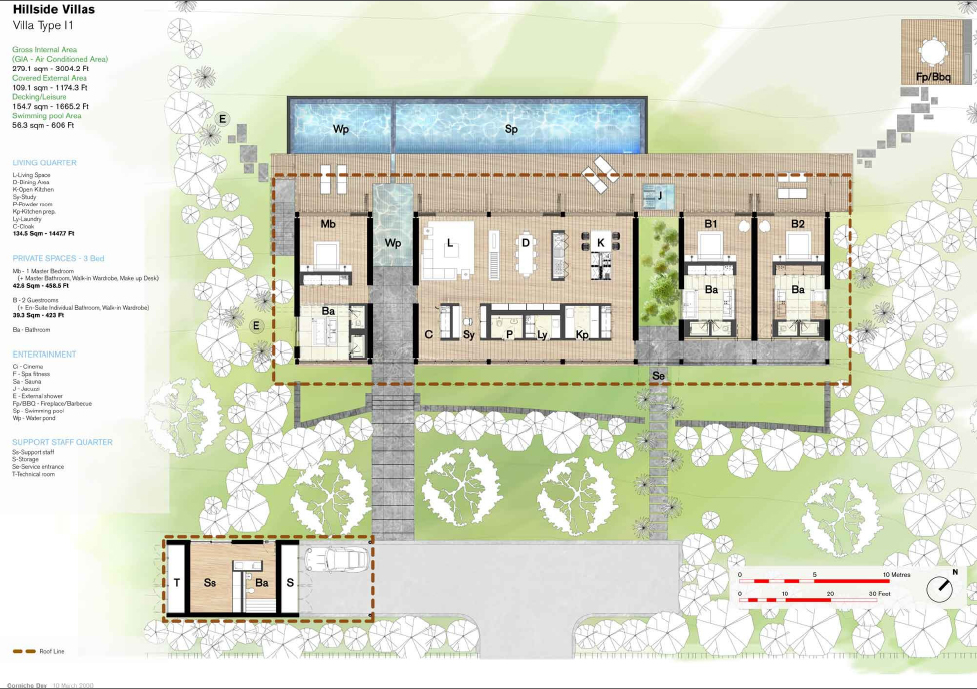 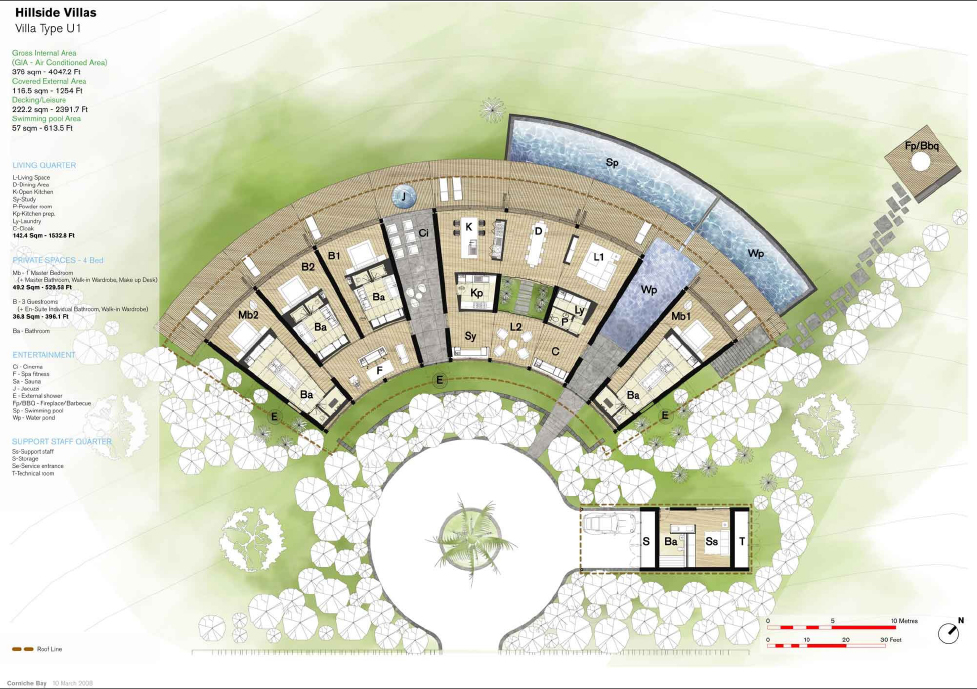 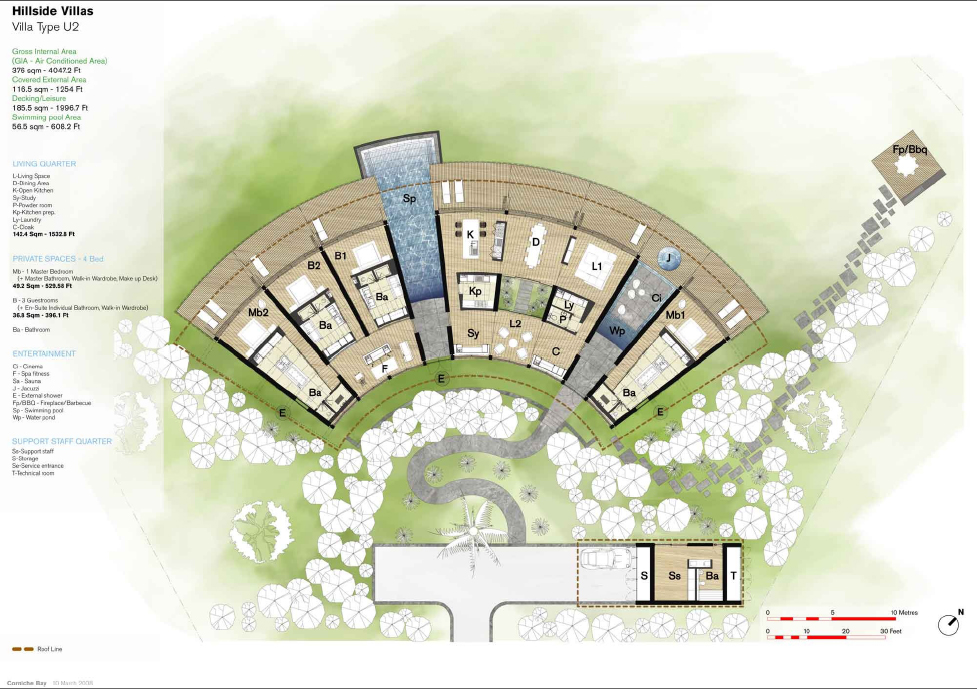 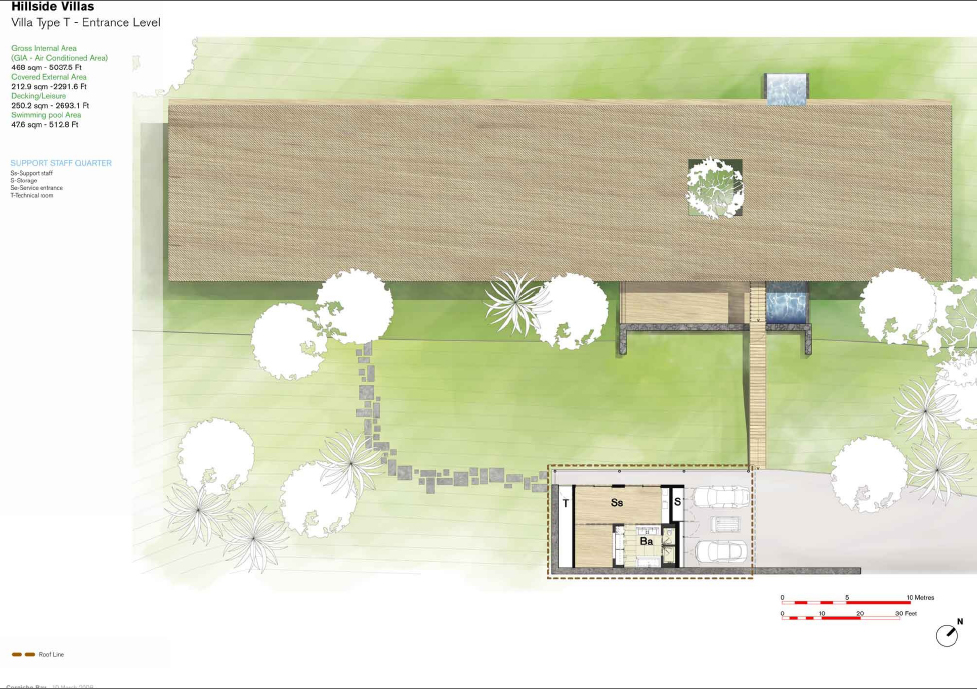 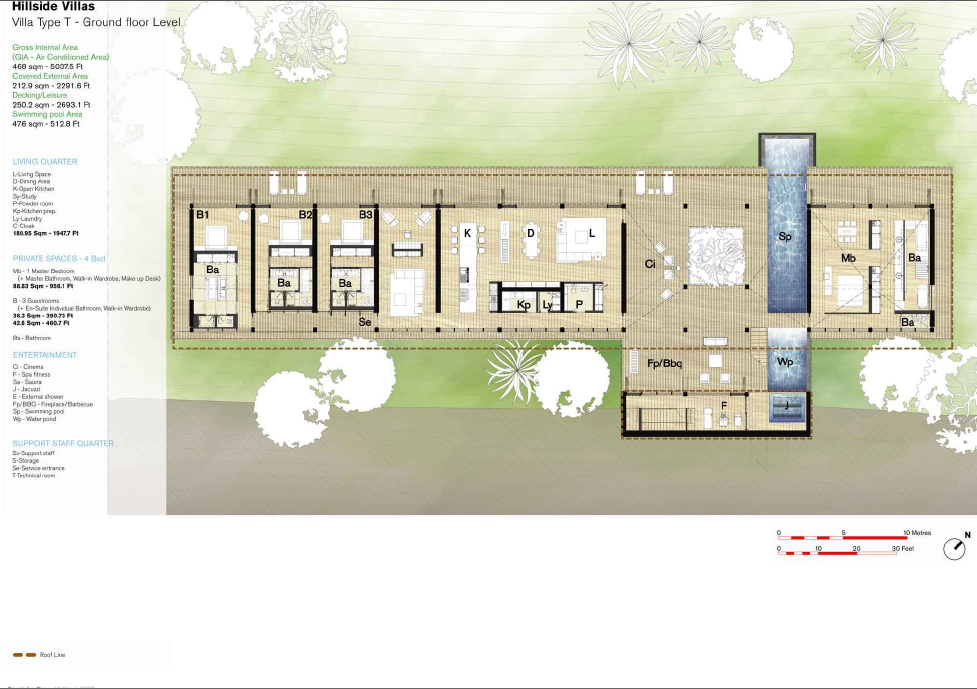 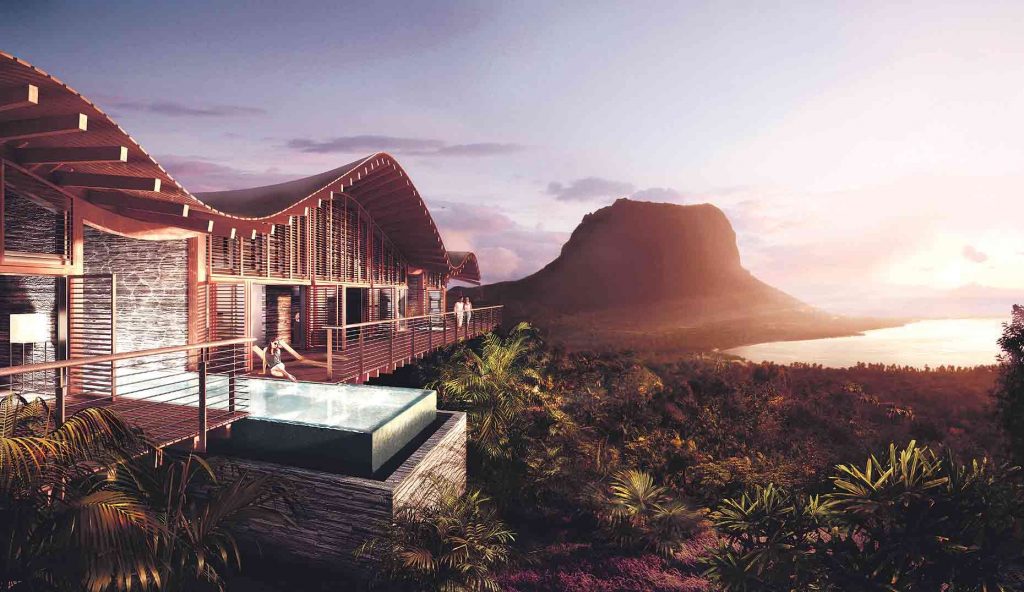 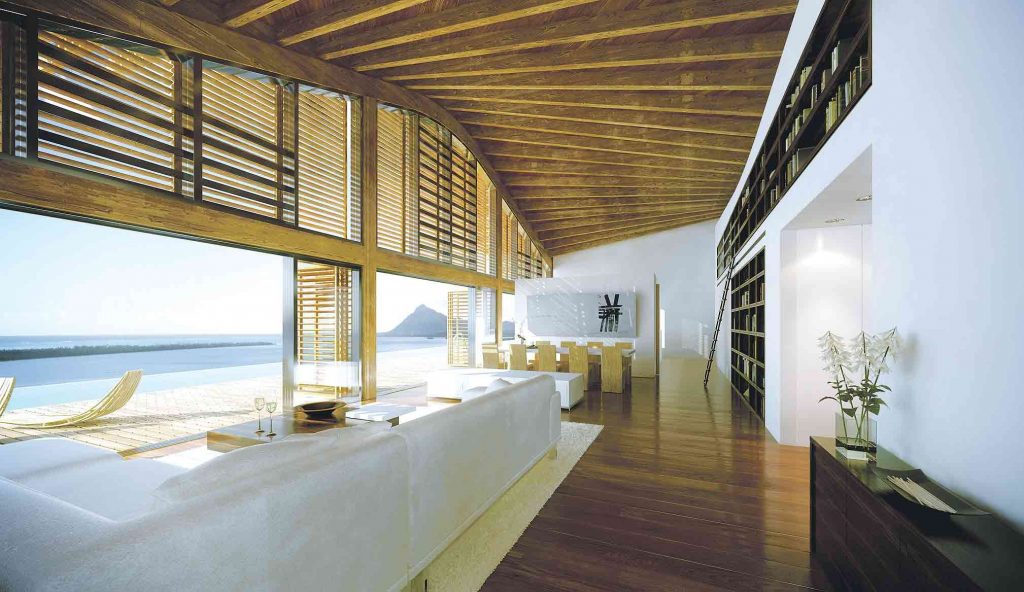 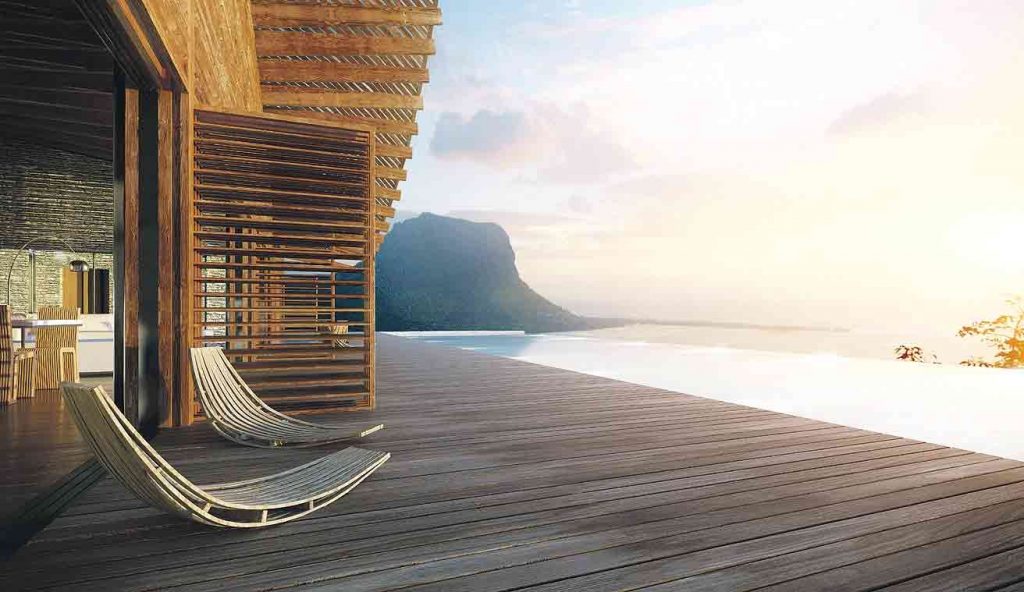 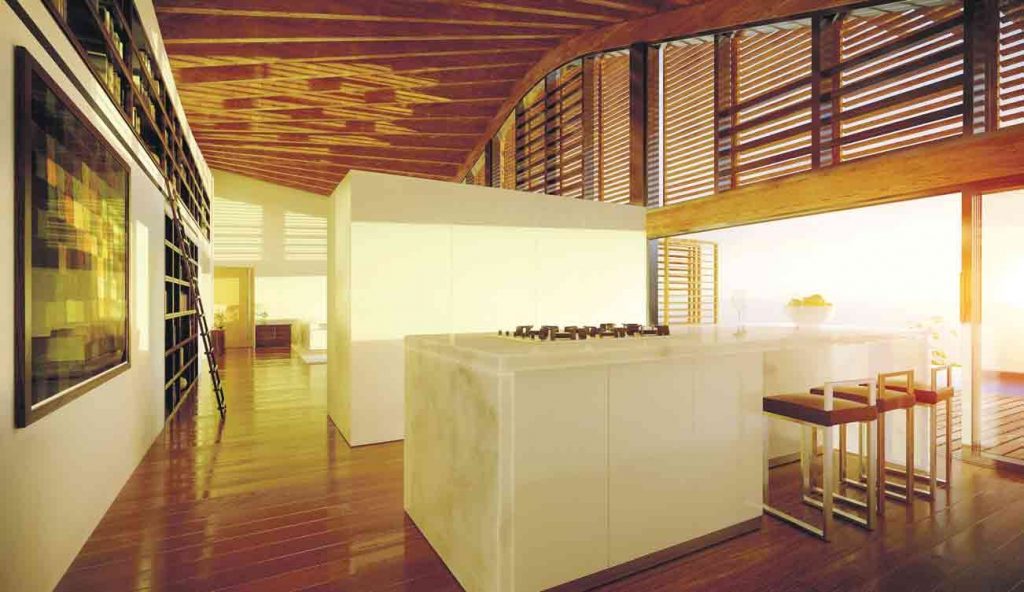 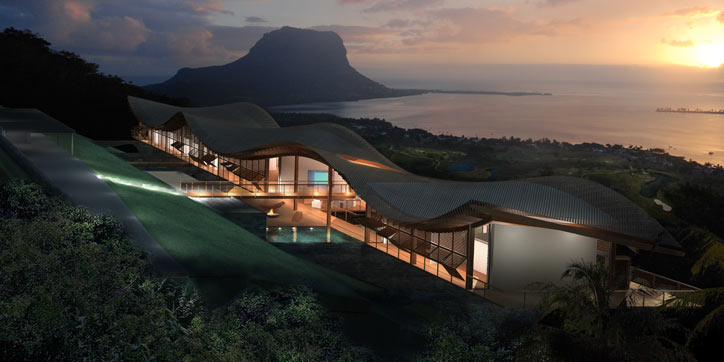 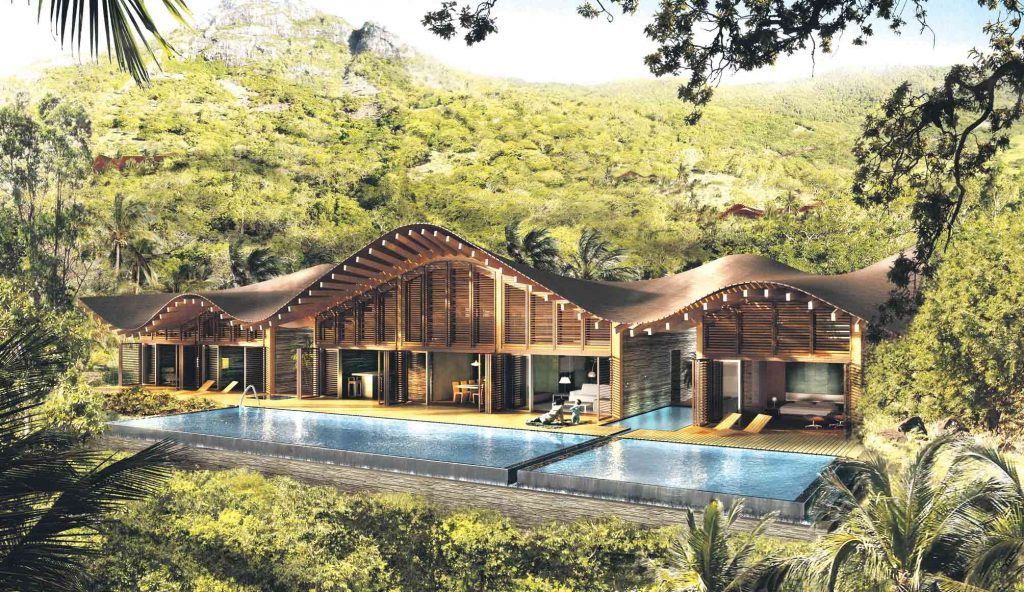 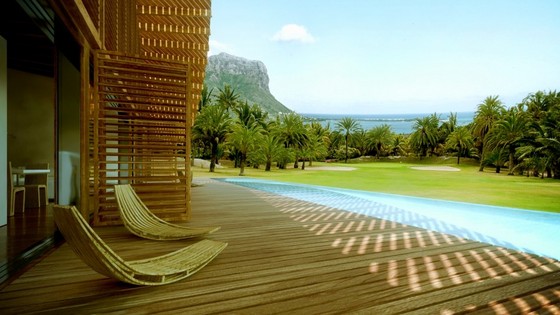 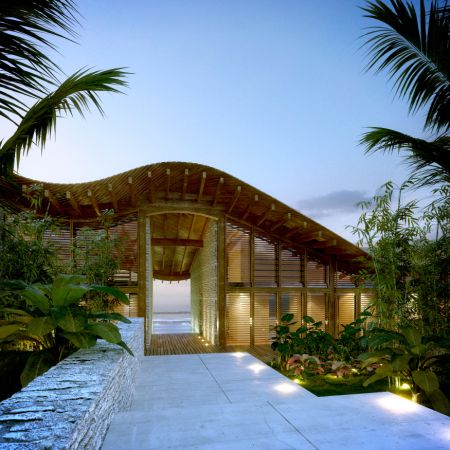