This house, built for a couple of artists, combines sobriety and wealth, as so often happens in the right architecture.

Sobriety (not simplicity) in accuracy and logic achieves the difficult adjustment of a clear organizational structure, support and space that is expressed and formalized via demonstrating their own being without adornments of false or grand gestures.

It is situated on a hillside in a dense forest on a stream and, according to Murcutt, is environmentally friendly in that it is raised on pillars so that runoff water can pass under it without creating a wetland and a dryland, as would happen if the continuity of the slope was broken to form a dam with its walls.

The idealistic aspiration of achieving ecological houses in harmony with nature, such as the Farnsworth House by Mies van der Rohe, some buildings by Alvar Aalto, or the Maison de Verre Pierre Chareau, becomes reality with contemporary materials used by the Australian architect. Buildings such as Magney House at Bingi Point or the Ball-Eastaway in Glenorie, combine the strength of essential livestock and the fragility of the module space.

The chosen location is a field crossed by the bed of an ancient river and abundant vegetation, on the outskirts of Sydney, Australia. The neighborhood is called Glenorie and belongs to the State of South Wales.

The house, in addition to the normal duties of a home, is expected to play the role of gallery, studio, laboratory, and hospital – a place where the artists can meditate and rearrange ideas.

Despite its small size and its quality an object placed in nature, this house is not just a veranda with a single quasi-open space placed over the land.

Murcutt emphasizes the importance of the central space, housing the painting gallery and exhibition hall, as opposed to the surrounding natural landscape or the unusual terrace to the northwest. It’s like a separare place of reflection upon the rest of the house, but here is also the kitchen, dining room, bathroom, bedroom, study, and another terrace.

We can define it as a longitudinally extruded piece open at its ends and high off the ground, supported by a lightweight structure of parallel identical porches placed at equal distances, whose pillars are the anchor points through a foundation surface.

The structure consists of seven porches with six spans of 4.25 meters, plus two terraces of 0.90 meters at the extremes. Each of the porches covers 6.83 meters of the total width of the house with two pillars located at a distance of 4.7 meters between their axes.

This lightweight structure of metal tubes anchored to the rock surface is reinforced by beams perpendicular to each of the tubular columns. The order suggests that the placement of the central column governs the extent of joists, the openings to the outside, and massive perimeter.

The wooden platform that extends through the entire house and that separates it from the ground sits on the structure of tubular metal.

At its roof, a domed cover of wood, wool insulation and plaster, continues to trace the longitudinal rubric that defines the house.

The multilayer timber is held to the perimeter by long screws, which, in addition to anchoring the roof are responsible for keeping together the layers of wood, so as to unite it all as one.

The roof is constructed in the form of an arch covered with a sheet that allows rainwater to flow to the extremities to be collected, passing first through a filter that removes passing impurities it may contain.

In his projects, Murcutt utilizes usual materials, traditional as much as contemporary.

In this house are found wooden floors, corrugated sheet metal, windows, lattice windows (the typical gravent kitchen) and venetian blinds in outdoor enclosures; shapes and tubular steel in the structural elements; many materials usually used for marginal projects or in temporary pavilions. However, here, these materials are sublimated in the accuracy of the project and willingness to be used in architecture, which uses art as a tool and not as a gesture of modernity. The house is built with very lightweight materials.

The roof is very slight, made up of a multilayer timber, an insulating layer of wool and a layer of plaster coating only 12 mm thick.

The exterior walls are of corrugated iron, an insulating layer of wool and the interior is covered with plaster board of 12 cm. The deck and the plaster is held together by profiles of zinc.

The north facade is all glazed and the passage of light is regulated by aluminum venetian blinds. Skylights have been placed in the bathroom and the kitchen.

The top of the wall of the bathroom next to the corridor is transparent and allows the passage of light in the hall.

An example, perhaps in an anecdotal overview of the standard project, could be the study of the defense system against forest fires. Consider the role of the roof as introducing a sprinkler system in addition to being the capstone to the vertical lines.

The metal coatings are also designed on the basis of “high risk of fire” in the area, in fact, paints used are also resistant to fire long-range and a network of small sprinklers are installed to soak the outside in case of need. 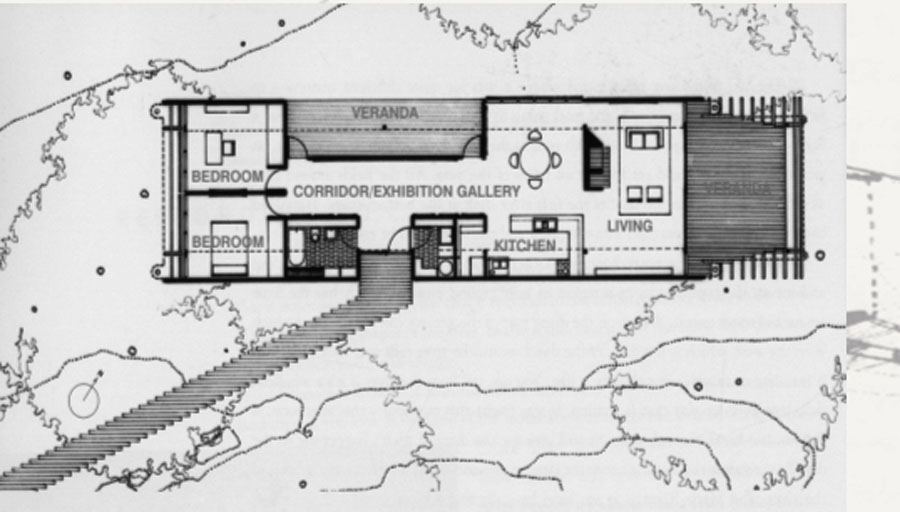 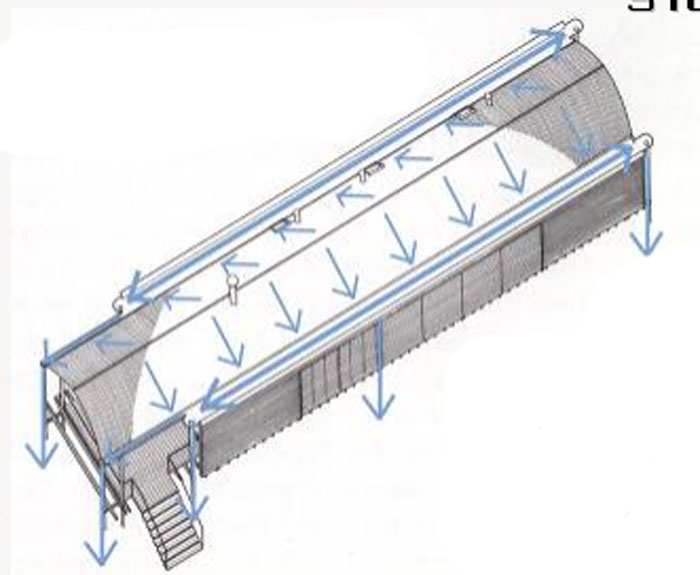 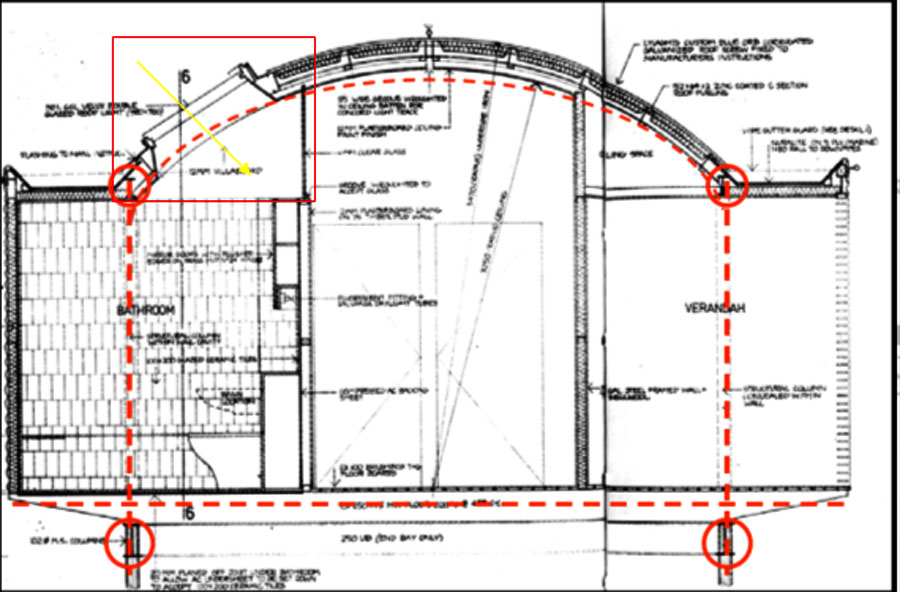 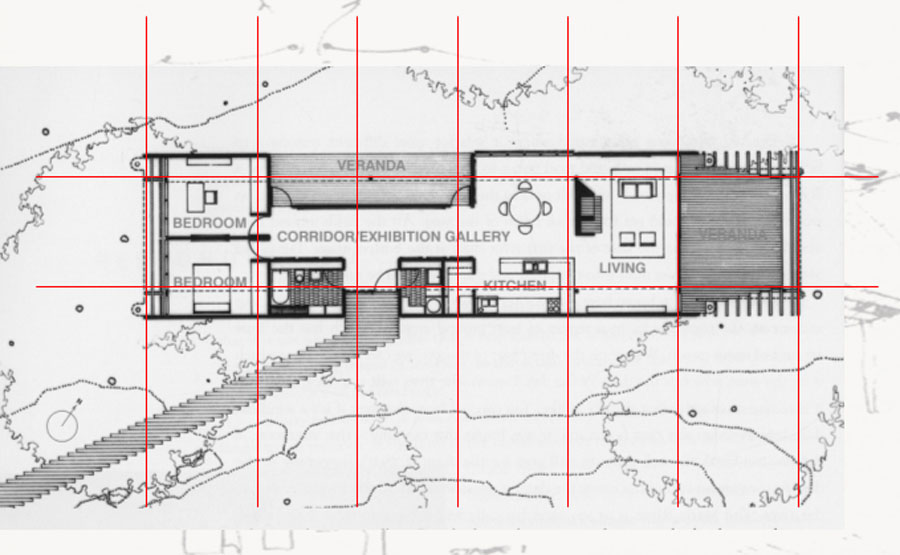 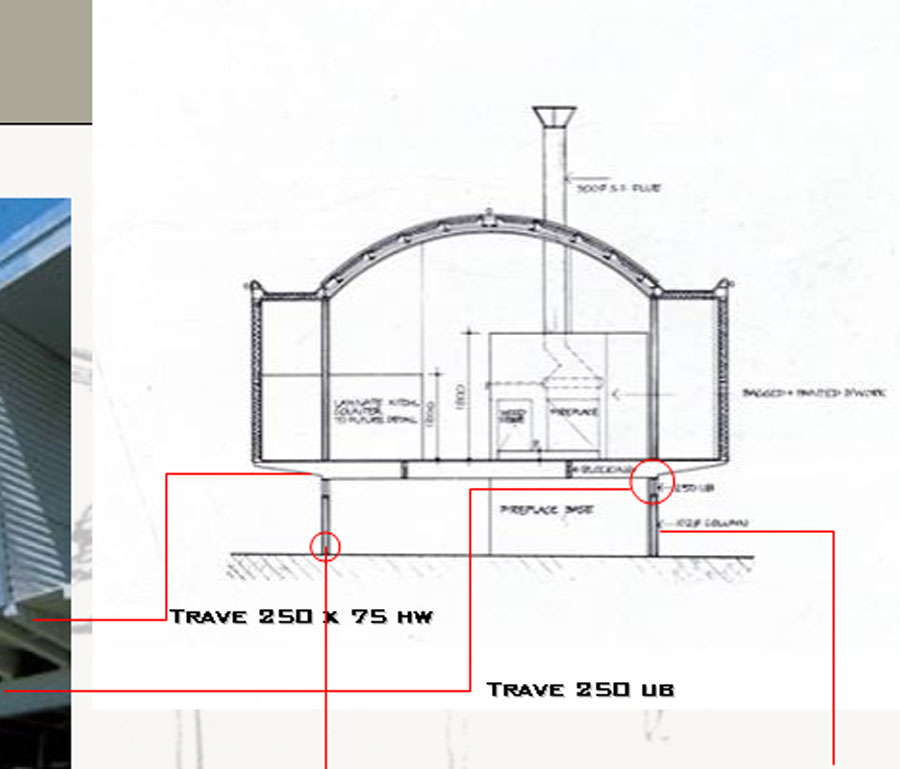 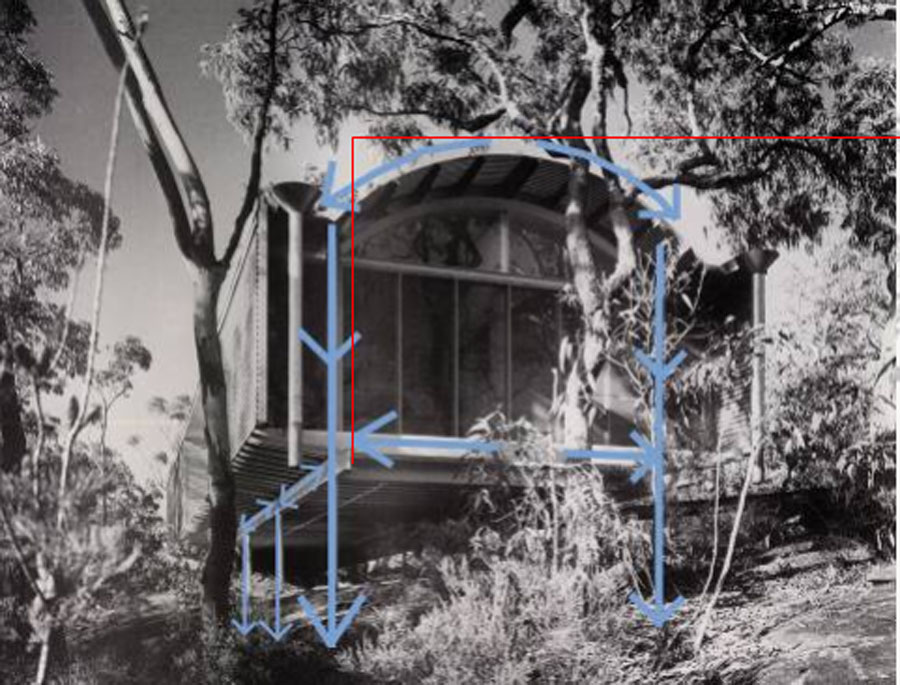 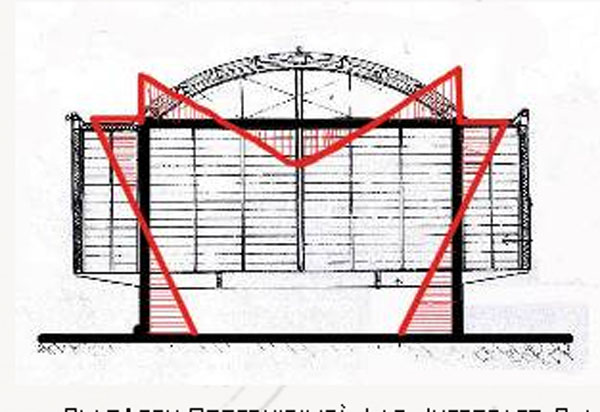 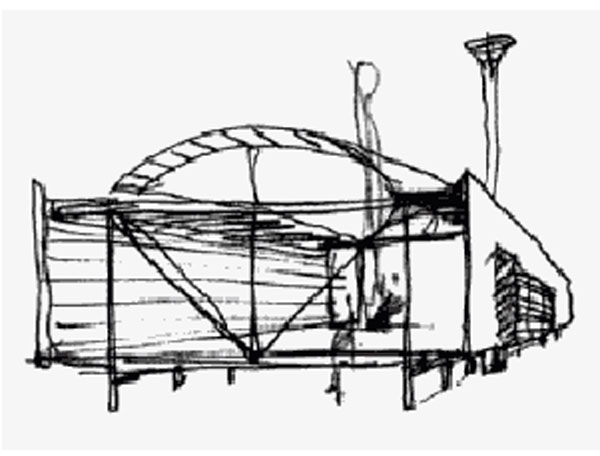 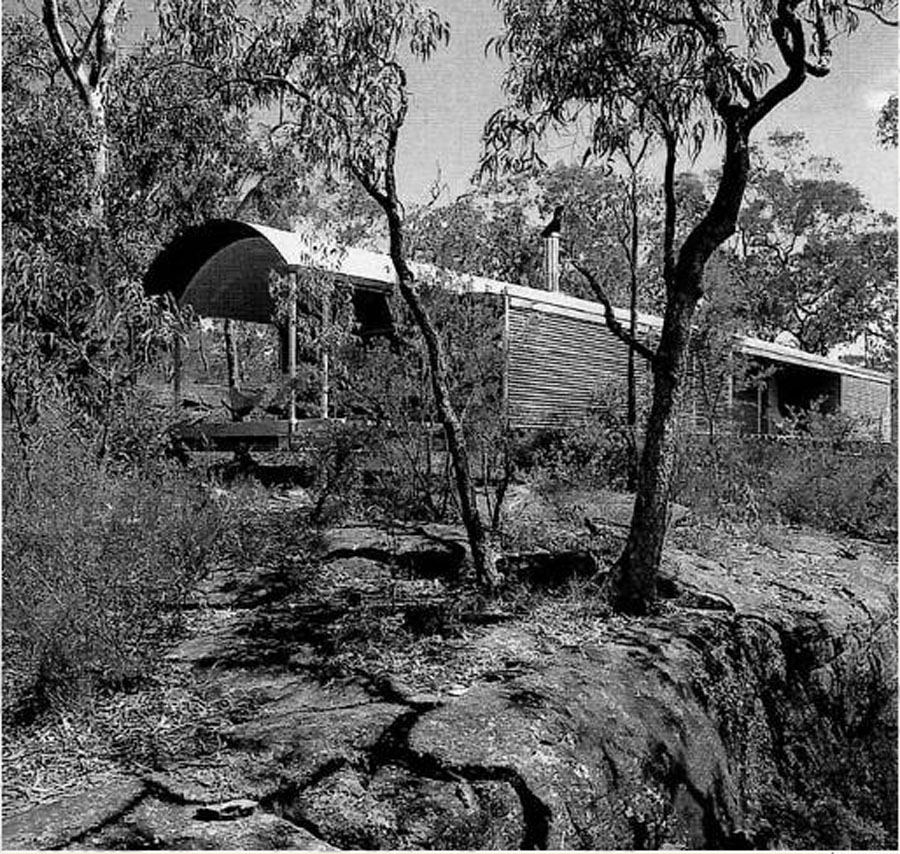 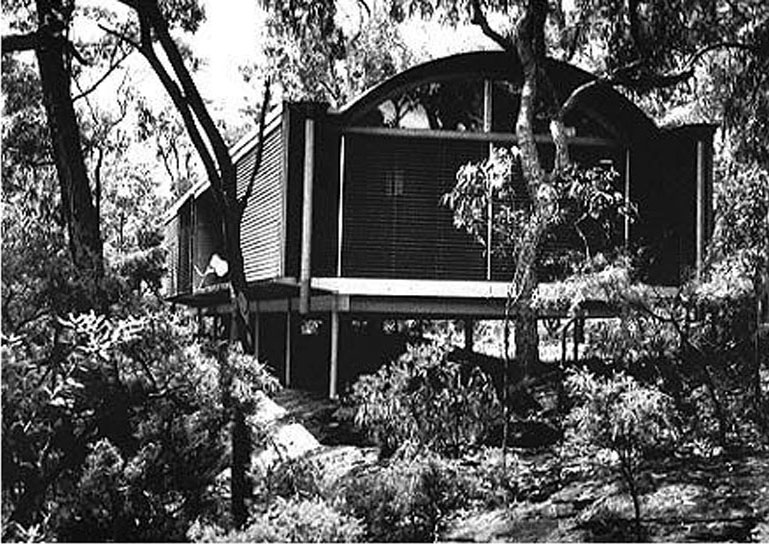 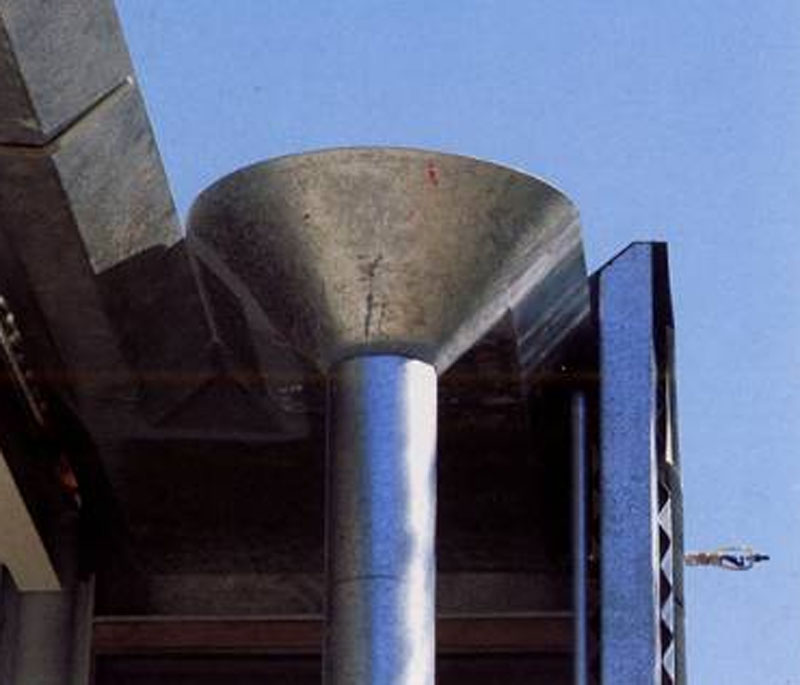 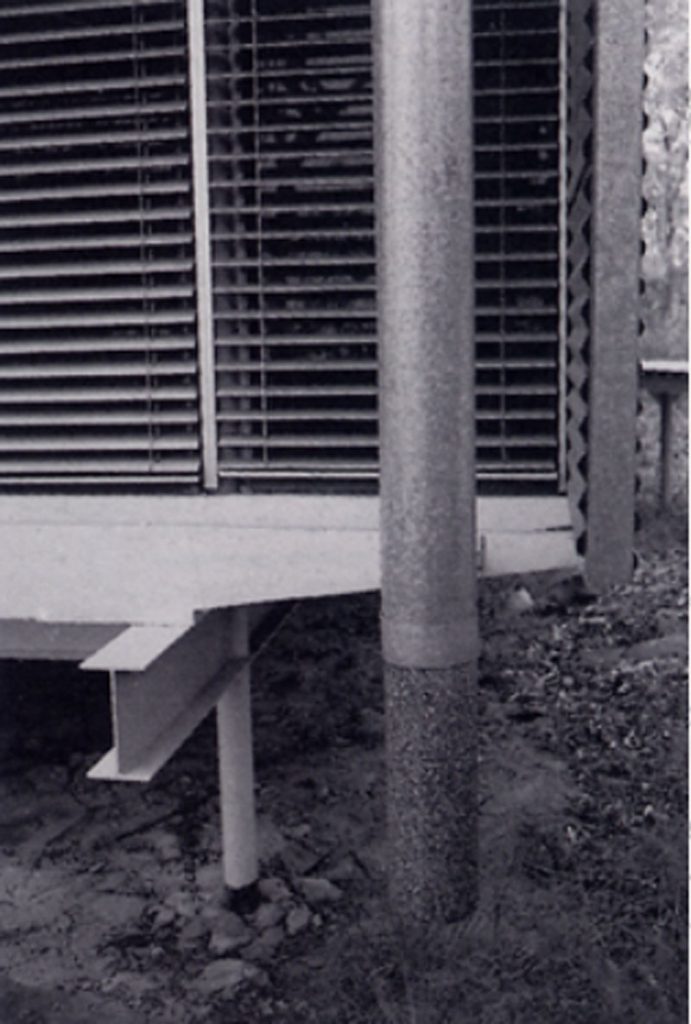 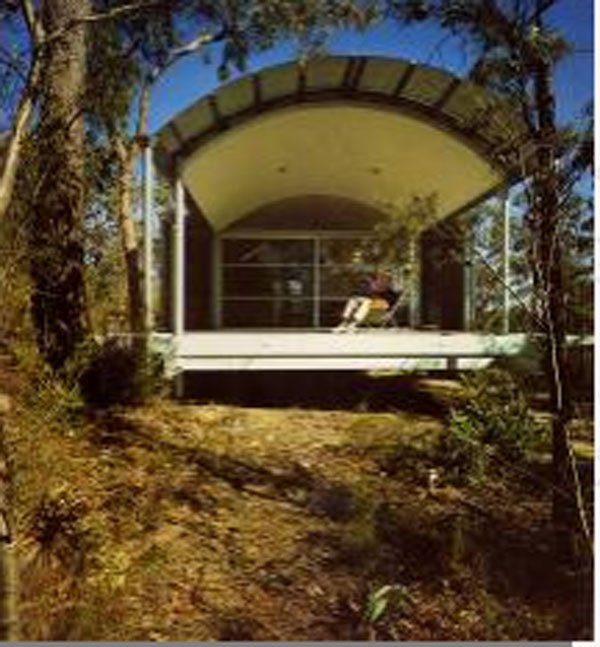 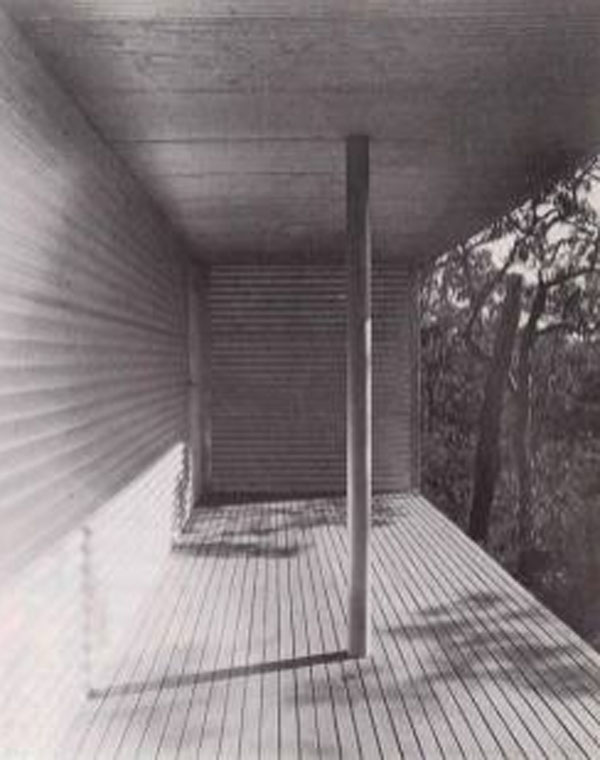 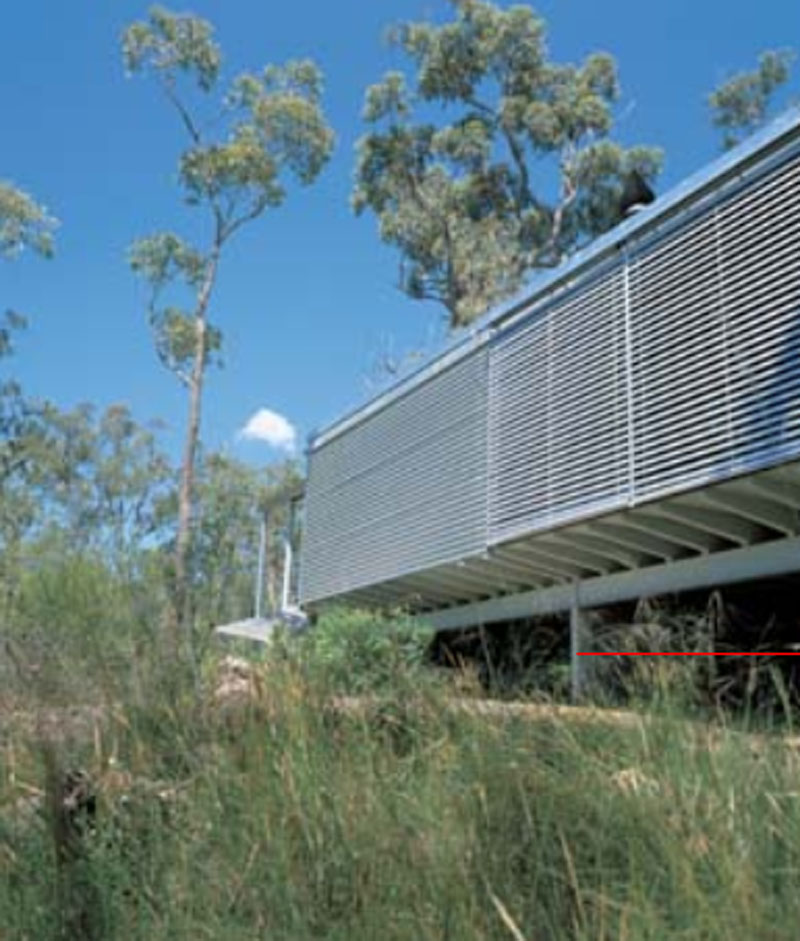 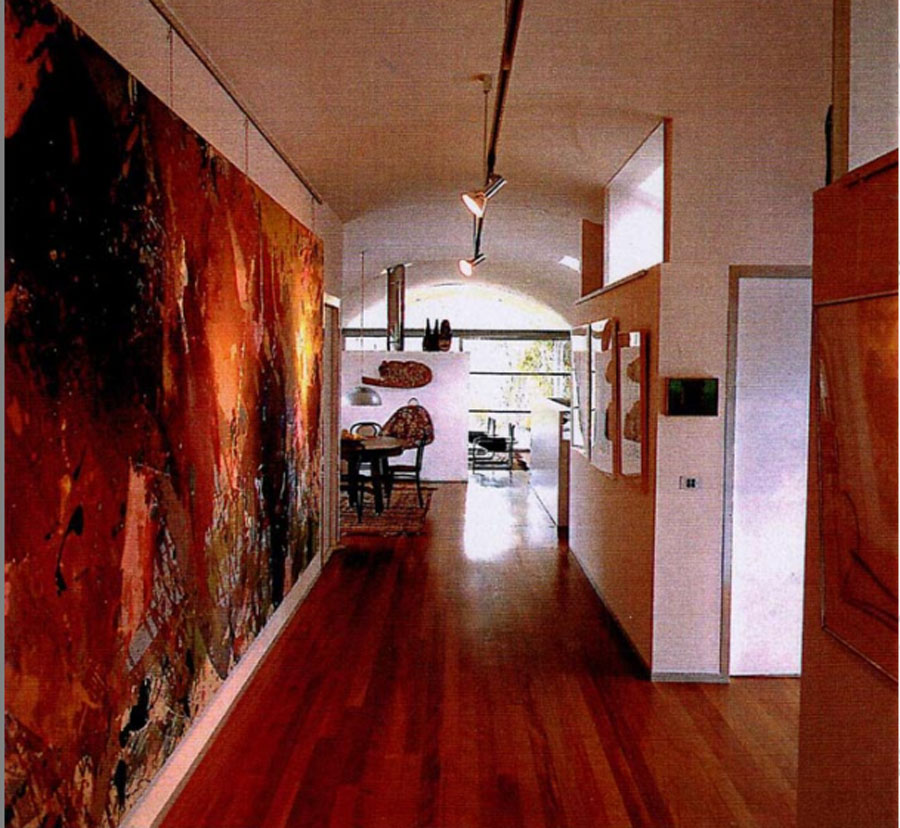 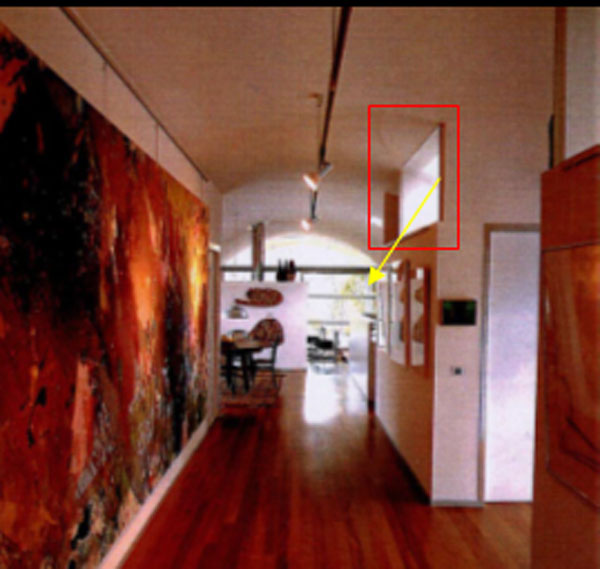 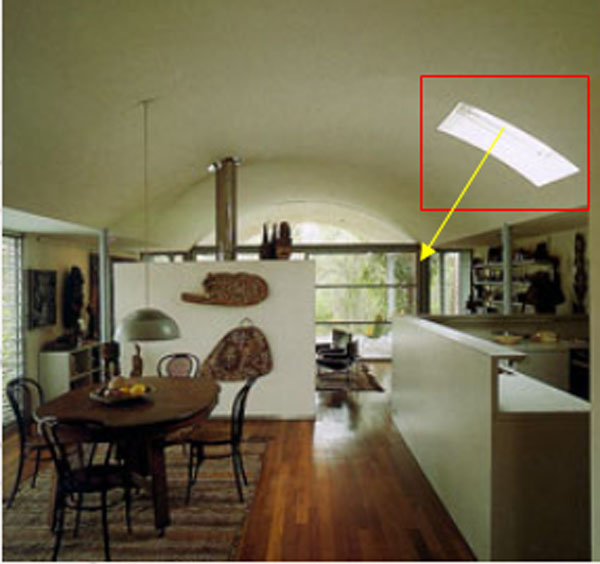 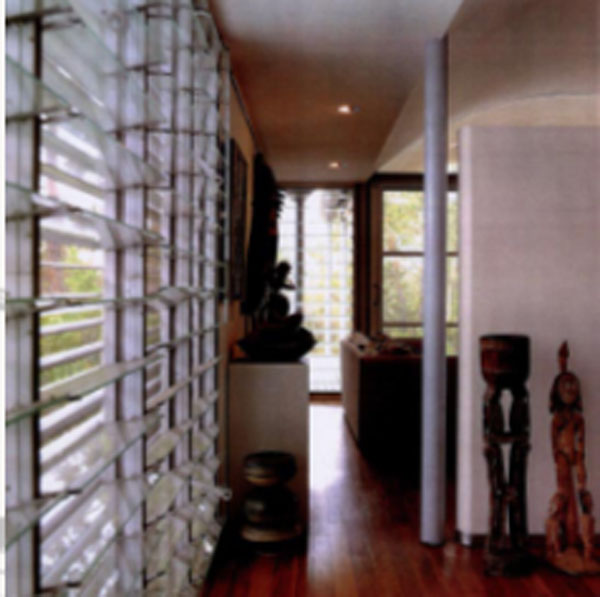