With a maximum height of 190m, Baku Flame Towers are among the tallest structures in Azerbaijan. Its design, with a continuously curved shape, makes these structures challenge rarely attempted. This is a project by HOK Architects and promoted by Azinko MMC in historic cucásica. HOK, while satisfying the request of his client, commented on the environment : “… I’d really like not to ruin this, because is very beautiful, but she is trying to do something new and aspires to represent the future… ”

The construction had to stop several times, forcing combat engineers to frequent winds of Baku, while taking into account the seismic activity of the area.

The Flame Towers, which have become a symbol of modern Baku, have received the MIPIM 2013 International Award for the best hotel and resort, also increased investment in innovative European property market. Other forums influential urban surveys, position the lighting designed by HOK for the towers as one of the newest and most accomplished.

Located on the shores of the Caspian Sea, on the south coast of the Absheron peninsula and on a hill overlooking the Bay of Baku, capital of Azerbaijan, the old and historical heart of the city and the park, this landmark trio of buildings transformed the horizon and promotes its historical identity.

Baku ( in Azerbaijan : Baki, Russian: Баку ) is the capital and most populous city in Azerbaijan, the Caspian Sea and the Caucasus. Located on the southern coast of the Absheron Peninsula, that projects into the Caspian. It is the largest city in the world located below sea level ( – 28m ).

The city consists of two principal parts : the downtown and the old city inside. The center of the city was declared a World Heritage Site by UNESCO in 2000. During his membership in the Soviet Union was one of its biggest oil suppliers. Since the dissolution of the Union became the scientific, cultural and industrial center of Azerbaijan. In 2015 will host the European Games. 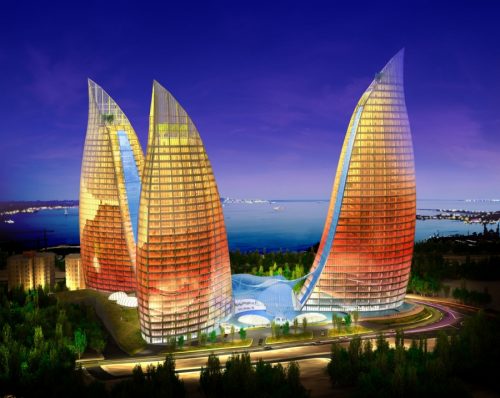 The history of Baku, with its cult of fire worship provided the inspiration for the design, which consists of three flame-shaped towers, each with a different function, set in a triangular shape are visible from many parts of the city. Baku Flame Towers are a symbol of the historic past and the future strength and potential of Azerbaijan. The design was conceived as a set of flames, driven from the ground up one of the main hills of Baku. Fire symbolizes energy and eternity, and also goes back to the ancient worship of this element.

Towers, whose design corresponds to Pierre Baillargeon, create a triangular formation joined together by a base formed by an undulating podium. The curved shapes of the towers ending in a point, like the pieces of a necklace of peaks, which curve around the gardens of the roof, providing a measure of protection.

The team of architects HOK International was presented with many challenges during construction. Its design, in addition to innovative, had to be resistant to earthquakes and potential construction parts made ​​without the use of cranes, due to the strong winds of the place.

The complex consists of three towers that share a common podium that acts as an anchor for the entire project, providing shopping and leisure facilities for residents and visitors. 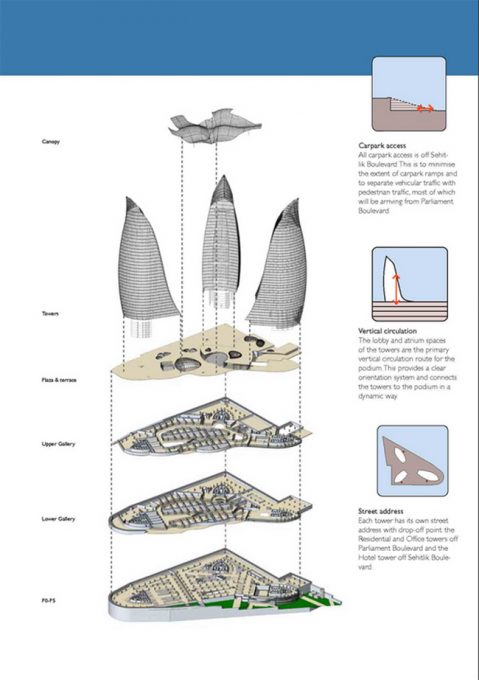 The podium, with 78m high and three levels, has a wavy glass ceiling decorated with a honeycomb pattern. It features leisure facilities, restaurants, cafes, cinemas and shops. Each tower offers 50 parking spaces.

The residential tower with 33 floors is the tallest of the three towers, is located to the south, and it distributed 130 luxury apartments with stunning views of the Caspian Sea and Baku. The building has a gym, spa and other amenities.

The hotel is managed by Fairmont Hotels is located in the northern corner of the land and has 318 rooms, 61 of which are serviced apartments spread over 30 floors.

The neutral palette used in the decoration of the rooms is accentuated by bursts of color progressing to the tower culminates with the Royal Suite, with deep, rich burgundy finish. Custom parts, like a crystal chandelier with teardrop and 6m high attract attention in the lobby of 17m in height.

A collection of contemporary art commissioned from Farmboy Fine Arts, complements the innovative design of the building.

The office tower is located on the west side of the complex, the lowest of the three towers, 140m in 28 plants, serving more than 33,000 m2 of flexible commercial office 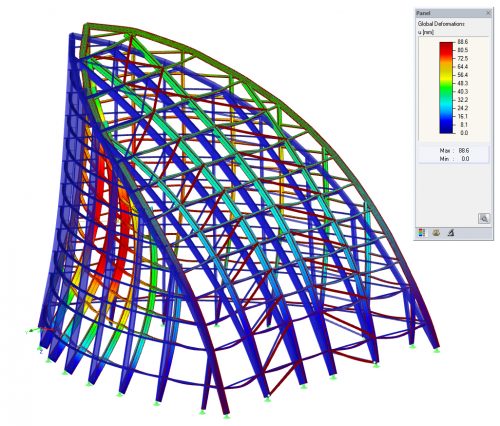 The main structural systems of the three towers are erected with reinforced concrete. By contrast, the upper floors of the towers were built with steel frames filigree creating a spacious place for special use. 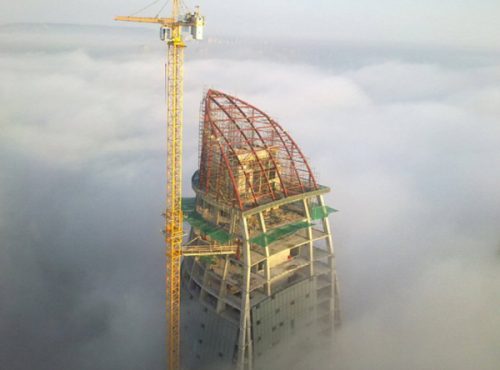 The primary framework of the needles is a spatial framework with three joints constructed with round tube 610mm in diameter. Following the geometry of the design, construction were used for biaxially curved sections of the tubes, welded connection points.
To reduce the deformation of the construction, which is 30m in height, vertical steel columns, the sides are joined to the frame by bending strength connections. A special triangular cross section, typically made ​​of sheet metal and steel round bars was used for these columns so that allowed a view of the outside as wide as possible. This section was modeled with SHAPE -THIN Dlubal program and then imported to RFEM.

Wind loads governing the design were determined by a wind report, reaching very high values ​​, up to 7 kN / m². Therefore, it took additional diagonal on the rear side curved steel constructions, in order to reduce the total strain on the needle of the towers at the required 90 mm. Due to the close cooperation of all technicians in planning the construction could be completed within the deadlines

The main materials used for the structure were reinforced concrete and steel pipe 6.10 cm in diameter.

The facades are fully glazed and used a mixture of tinted orange and blue. The orange gives them the appearance of fire in accordance with its name and form. On facades also highlights a grid pattern that accentuates the shape of the towers.

In response to the tradition of the place in their worship fire, the facades of the towers are completely covered with LED screens, with more than 10,000 lights, showing the gentle movement of the flames visible from the outermost points of the city
This lighting creates the effect of giant flares emphasize the main idea of the towers built in his name ( Flame Towers Baku ). At night, its exterior LED lights to represent the flames, a waving flag of Azerbaijan and other moving images.