In 1957, Mies van der Rohe designed the new headquarters offices for the Bacardi Rum Company in Santiago de Cuba at the request of the company president who had been impressed by a previous encounter with the architect in Chicago. But with the revolution of 1959, the work was not carried out and the company continued to operate from the 1930 Art Deco tower, designed by architects Esteban Rodríguez Castells, Rafael Fernandez and Jose Menendez Ruenes.

The project showed many similarities with other works of the architect. The project for the Museum of Schweinfurt Schäffer and Neue Nationalgalerie in Berlin, both designed later, are characterized by the use of large platforms, square, orthogonal grids, fences behind the cruciform structure and supports, such the Bacardi Offices design. Here is clearly represented his postulates and his way of working with the concept “less is more”. Mies used the same principle of “open plan” and “fluid space” used in works like the German Pavilion of Barcelona. The quest for visual connection between interior and exterior space is also repeated in this project.

The possible locations of the project were in the Second Street and Central Road or Avenida de los Libertadores, in a plot at a corner between two streets of vehicular traffic. Between one street and the other the ground is significantly uneven, which the architect included in the design by making the earth a part of a wall.

The area generally has low density of green space due to surrounding buildings, except for the medians.

This is a concrete structure with strict geometrical form as its principle order. It is not presented as a building block, but totally flexible.

It is distributed on two floors. The floor relies on a high platform and is completely free, supported by eight columns that leave open the four corners, so the building acquires much liveliness. The enclosure was designed to remove the ceiling of the deck, creating a gallery. Here is a clear separation between structure and surroundings by the defining elements of space.

These features make it very different from a closed box to generate a large open space: glazed, permeable and flexible.

Because of the slope that the plot presents, the building is located on a platform that shows this difference in levels. Access is through a staircase plastically enhanced by two side walls, one of which is bordered by a road to the rear parking lot and the other in the southwest side by neighboring property. The wall creates a courtyard in which there was expected to be some sculpture.

The interior is divided into two floors. The platform is partially buried, in response to the slope of the terrain. It closed a floor where you will find features such as secondary storage and cafeteria services. It can be accessed both from the internal staircase located on the upper floor and from the outside with a separate secondary entrance.

The floor plan is completely free and open. The enclosure is made of glass on its four sides, inset 6 meters from the edges of the roof, creating a large gallery space that runs along the inside. On this floor are the offices, counting as the only fixed staircase leading to the ground floor and a vent that goes from floor to ceiling. These components are also two independent partitions of wood 2 meters tall. This large space can be divided into three areas demarcated by these elements: one near the access ladder that serves as the building lobby, another that serves as a meeting room and a third higher than the previous two works as a broad work room.

The structure is reinforced concrete, consisting of a deck of 54 square meters to one side, supported on eight cruciform columns of 7 meters tall.

The roof is a large grid formed by beams that post, responding to the diagram of moments, and have their largest section in the middle and smaller sections at the ends, with a minimum section of 1.5 meters.

The columns are located in pairs on each side of the deck at the edge of the roof but not on the corners. They are 15 meters inward, creating four large overhangs. The eight supports are cross-sections of concrete, tied to the deck by a joint of steel.

The structure is reinforced concrete. The enclosure is made of skoky glass. The interior panels are of timber. 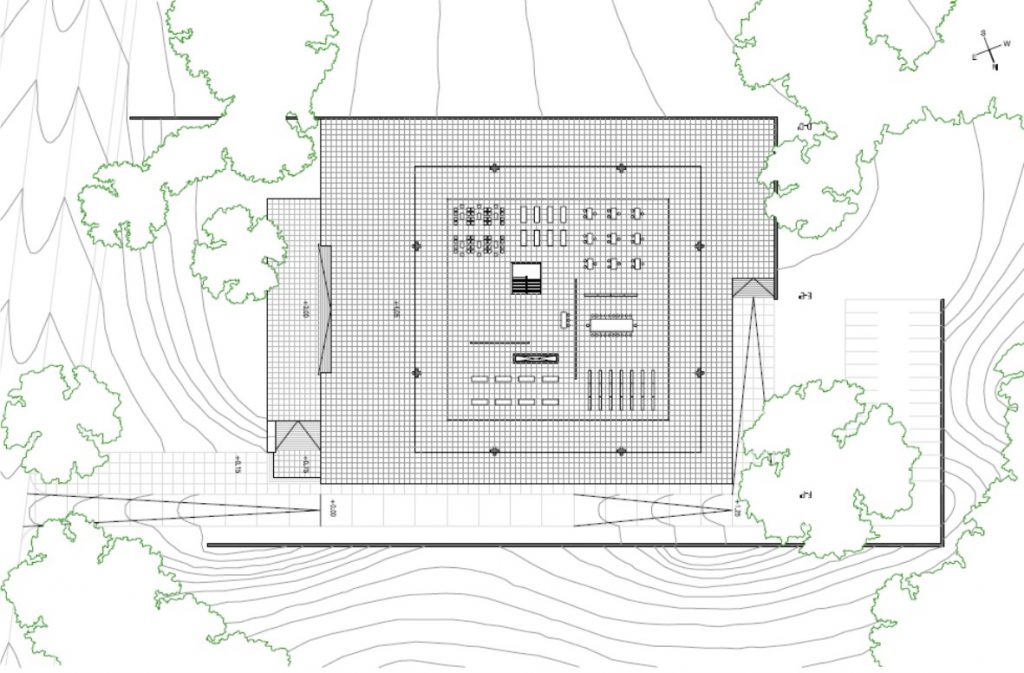 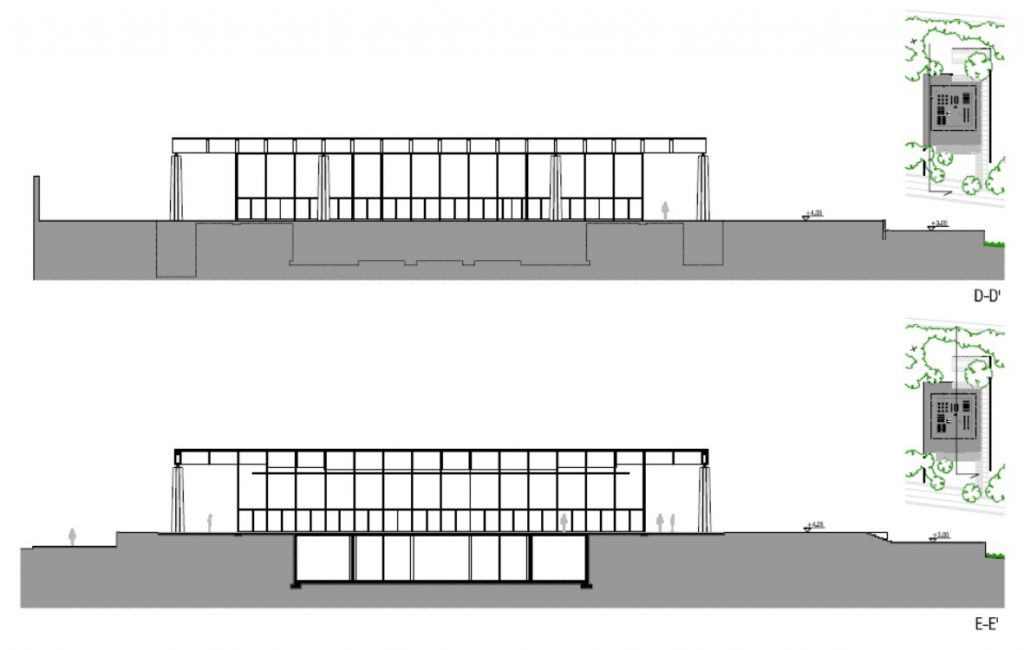 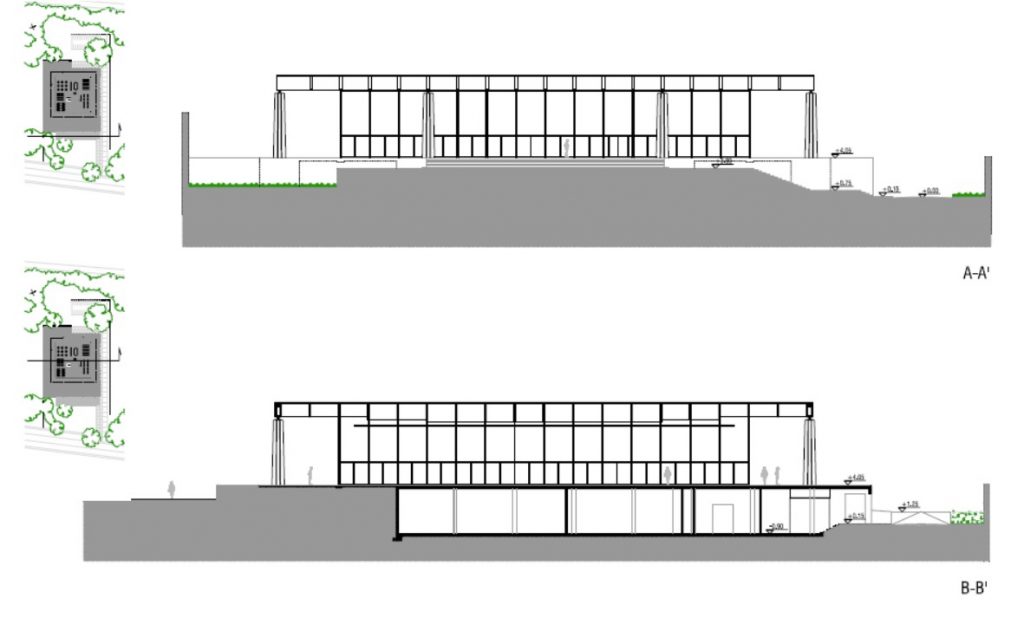 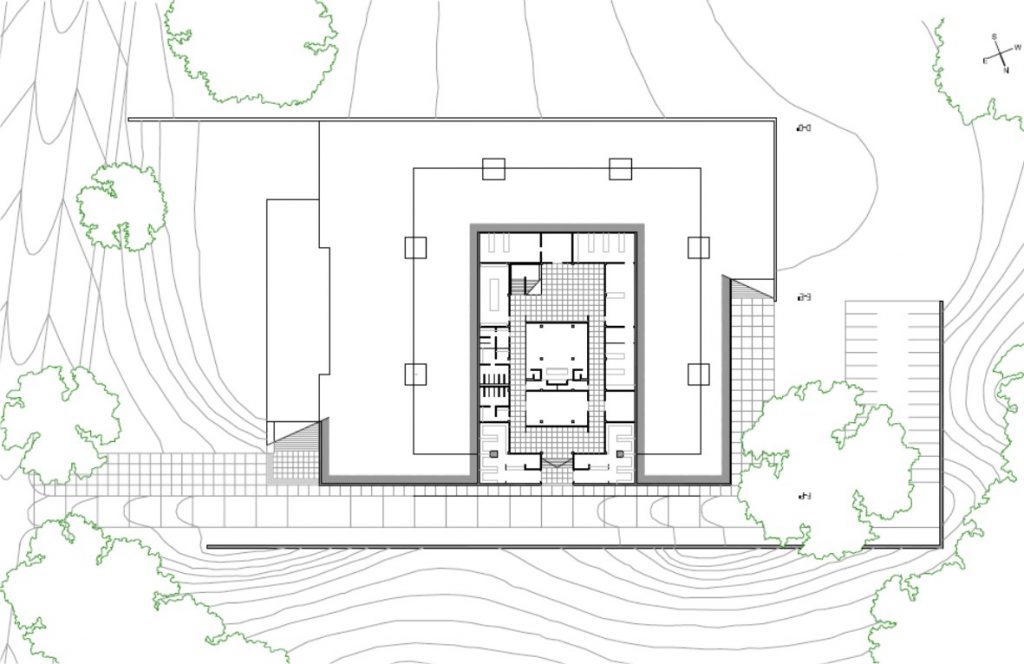 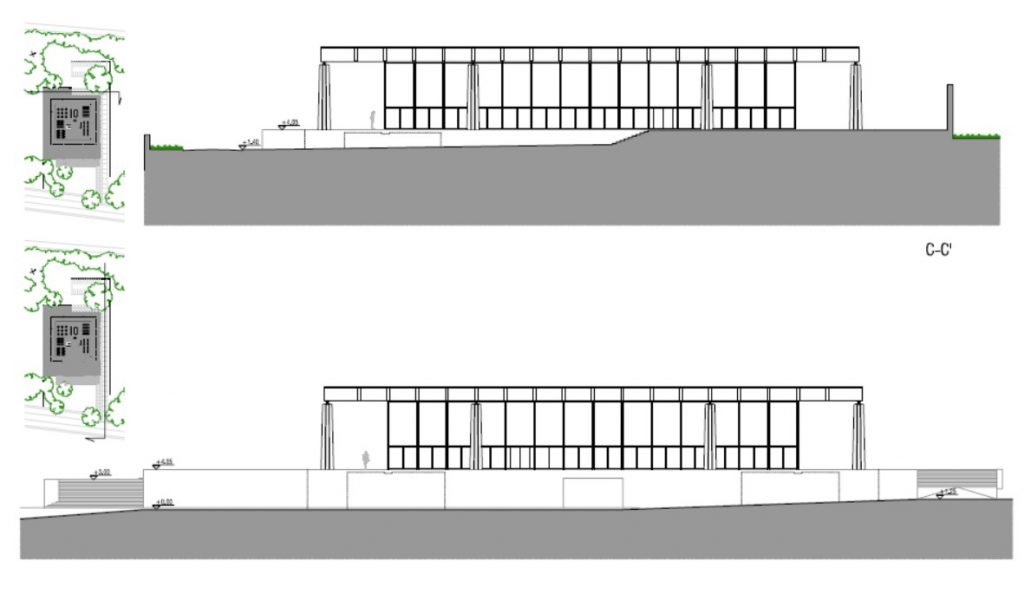 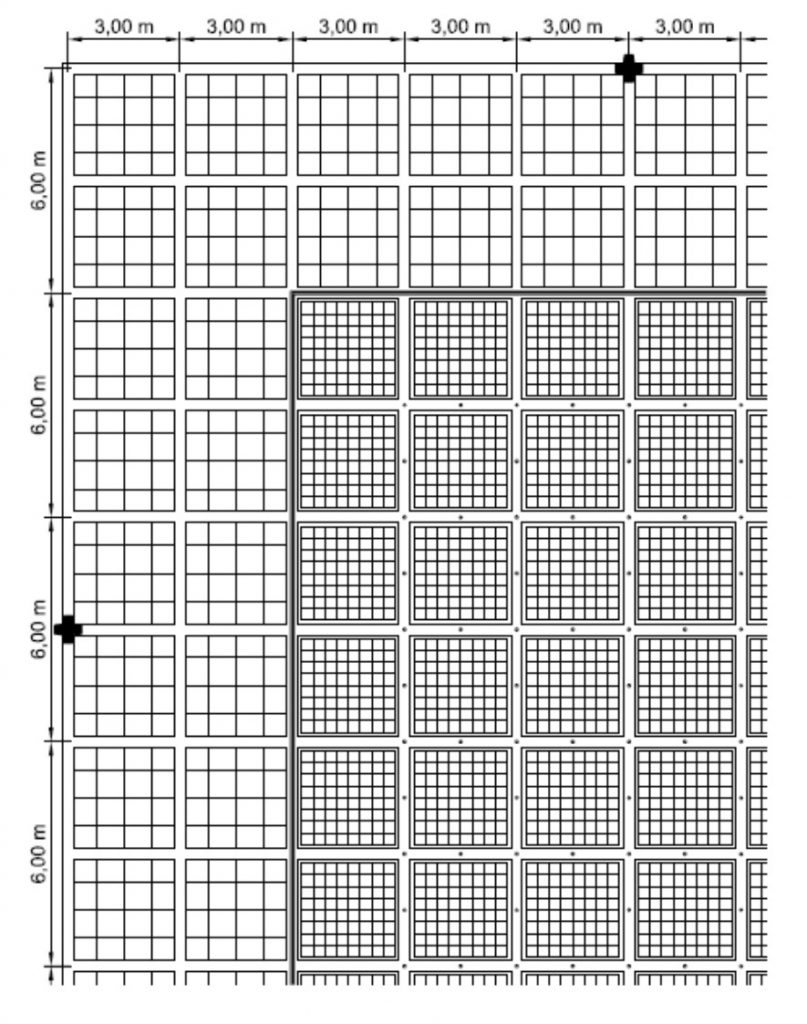 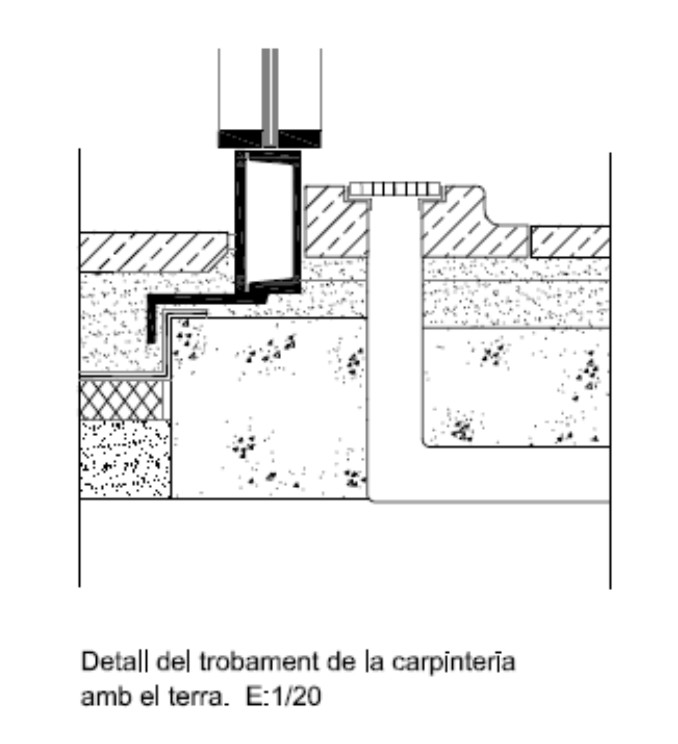 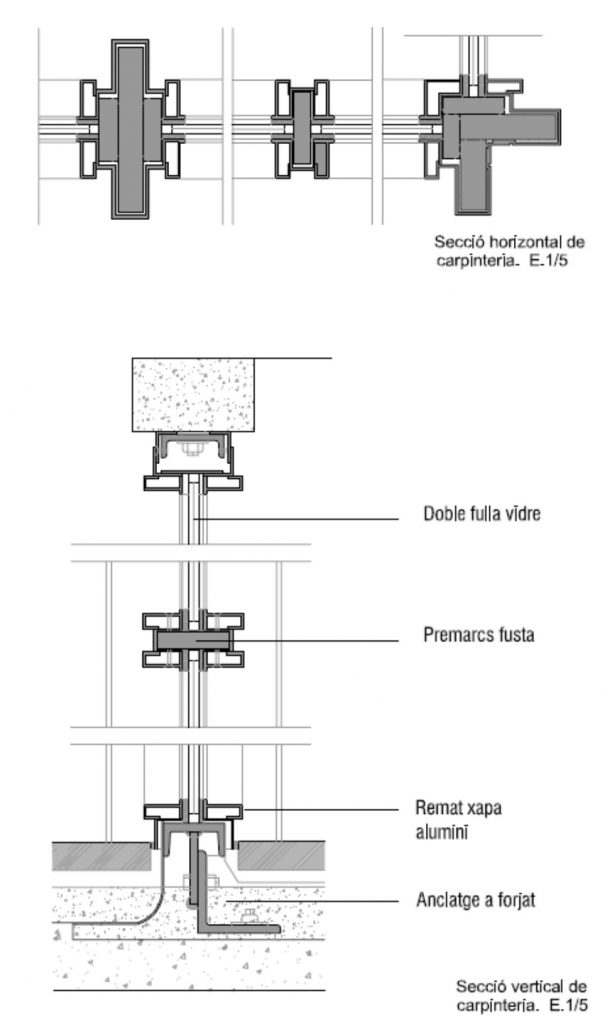 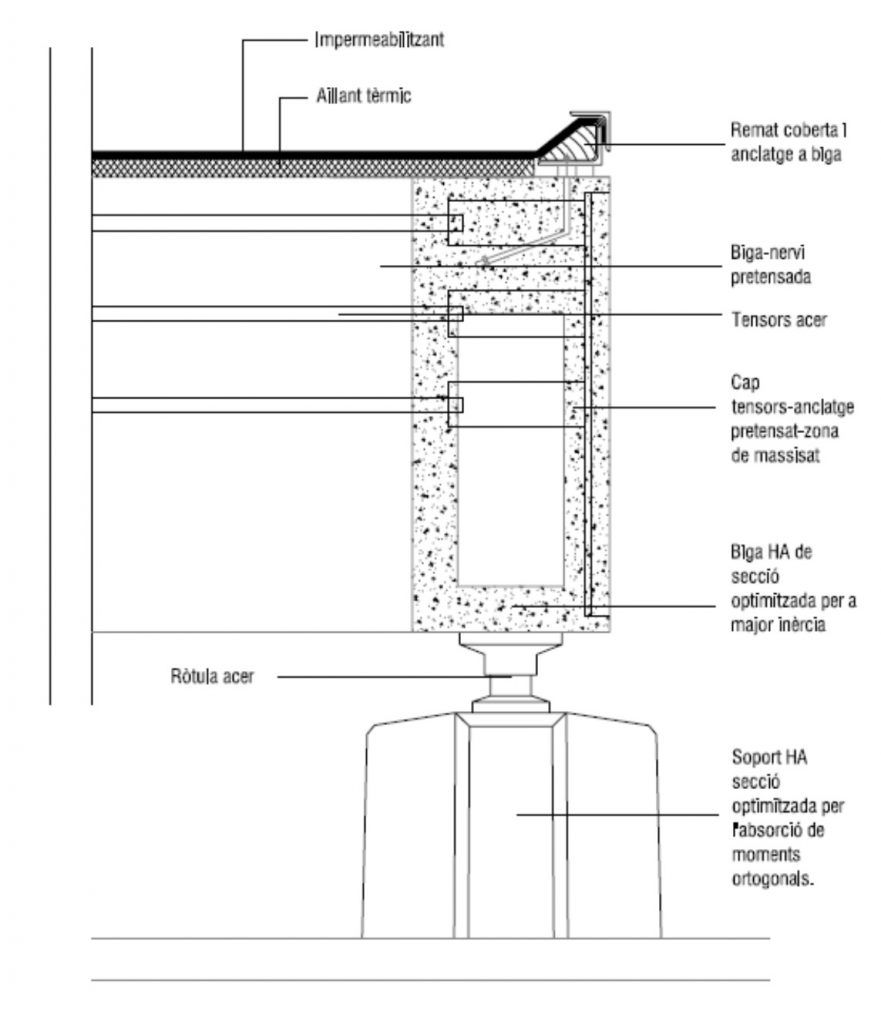 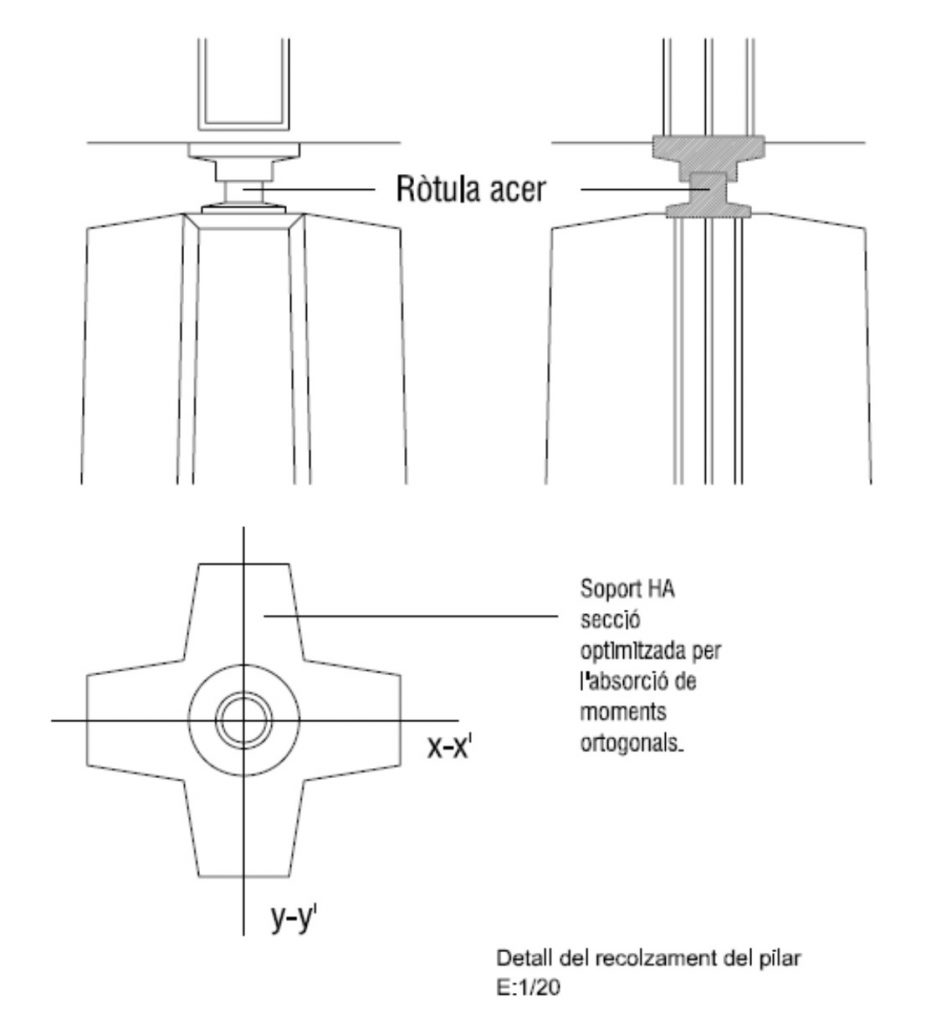