The Auerbach house project is located in an industrial and university town near Weimar called Jena, it is a house that was designed in 1924. He was one of the last projects that Walter Gropius screened in their study of Weimar. The town was made for a professor of physics Felix Auerbach.

Walter Gropius along with his partner Adolf Meyer office tested various theoretical models as the “Baukastern Im Großen” (a module construction of large size). Both elevation and in plan in all directions. The solutions from Gropius would now be defined as the classical and subsequently employ them in the House of the Masters.

The project as a pioneer in the movement, suffered rejection within and outside the city, however it earned to give continuity to all ideas that were on the desktop of the Bauhaus school.

Schaefferstraße 9, 07743 Jena, Thüringen, Germany. It was restored in the 90s and is currently a family home. Can be contacted at the address for a visit is made in German language.

Once the module construction worker, Gropius was the design of the house binoculars as two bodies are joined together, allowing the heights of the bodies will generate uneven to use them as part of the program uses.

In the case of roofs used the lowest of the prisms as a terrace of the body with superior height.
The harmony that generate the two bodies may feel because of its clear definition from the system worked constructively.
A stone base and stucco were used to create perfect volume, generating a kind of typical objects of the modern movement from this stage and we would see in all the work of Gropius.
Along with the construction project was designed color of the house by another collaborator named Adolph Arndt, floor plan and elevations showing it, united in one and a perspective drawing that shows the selection of colors that range from red, yellow, blue
gray, black and white.

The house program is simple but complete for single-family program.
The spaces it contains are:

The house features a design consisting of local materials, stone was used“Jurk”for the exterior walls were load bearing, so Porbably the foundation is of the same stone.
Jurka walls are not detected by the naked eye, because these are described as slabs of stone dam with sand, made cuts to a size easy to handle.
Previously used by Gropius in the “Haus am Horn” in Weimar (Bauhaus experimental house in the year 1923), designed by Adolf Meyer, former head of the office of Gropius.
The coating has plastered the building is bright white, contrasting with the dark frames of the woodwork, based on extruded profiles and sheets of steel, highlighting the features of the modern movement.
Another important project that was done to color the house both inside and outside, highlighting colors like red, yellow, blue, gray, black and white, oil paintings conservation. 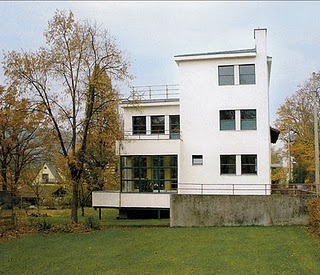 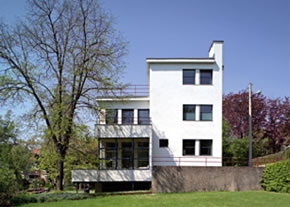