Spanish architect Santiago Calatrava was selected by the Organizing Committee of Olympic Games of Athens 2004 and the Ministry of Culture of Greece, in the midst of a great controversy, to redesign the Olympic Sports Complex (OAKA) with other important works.

The objective was reflected in the design of both the identity and history of the modern Olympic Games as the Greek capital, aided by the technological and aesthetic principles.

The architect explained that the project was his dream, to do something special and different from the headquarters buildings of the cities of the Games in the past, because Athens is the site of the beginning of the modern Olympic Games (1896) and Greece is the site where they were born and held in antiquity.

The work bears the unmistakable imprint of its architect, as can be seen in the bridges, especially the use of the famous “combs” made with bows and tensors.

Santiago Calatrava’s project was conceived as a living work connected between each of the parties that compose it. Organic architecture is where the skeleton assumes great importance in the design and works as aesthetic elements and containers of life.

The complex has an area of approximately 96 hectares, located in the suburban district of Maroussi, 5 miles north of downtown.

This is a project of unifying the urban aesthetic and an approach of a single character building, dialogue between athletics and culture.

The sport and its surrounding areas are interconnected, are easily accessible and equipped with amenities.

Calatrava designed a compound based on the spatial arrangement of the ancient Acropolis and the Byzantine period of Greek architecture, where many buildings are in the form of an arc, and the blue and white colors of the Aegean Islands.

A major boulevard called Central Axis organizes access to the various stadiums. Their route was the traditional form of the Calatrava Comb, projected onto the radial curve with its movement. The boulevard is bounded by an emblematic work of the complex: the Agora, a curved road in the shade of a large metal pergola.

In addition to its expressive role, forms of the complex are designed to respond to the need for climate control. The roof of the Olympic Stadium, as the Agora and pergolas, landscaping and artificial water, mirrors the Central Axis and provides cool shade. Inside and outside the OAKA complex were planted olive trees, pines, oaks and cypresses.

Calatrava’s design also included the construction of a landmark Olympic Torch 120 meters high to hold the Olympic flame and a wall of Nations 250 meters long, with moving parts to create a wave effect and shadows. All this, along with malls, plazas, water fountains and a pool.

The Olympic Stadium in Athens “Spyros Louis” is the main stadium complex. Here were the opening and closing ceremonies of the Athens 2004 Olympic Games. The stadium underwent a complete reconstruction.

The roof is a dynamic structure whose main pendant are two arched metal supports of three meters in length which rise in the center to 78 meters in height. These axes run along the stadium and support each dome, hanging from a support of double arches. Overall, the roof weighs 17,000 tonnes and covers an area of nearly 25,000 square meters. Under the surface, it can shelter 75,000 spectators from the sun and rain.

The two carriers are provided with arched metal crimps and polycarbonate hook plates 12 mm thick and almost five meters wide. These plates are dyed blue to provide a warm, open light in the stadium, while leaving the audience the ability to look to the Greek sky.

The Velodrome, with a capacity for 5,250 spectators, was completely covered by two arches similar to the Olympic Stadium, although more rugged.

The structure is of steel.

The elements of the wall plates are made of solid and transparent Makrolon polycarbonate, by Bayer Material Science AG. 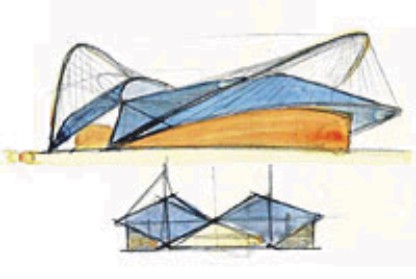 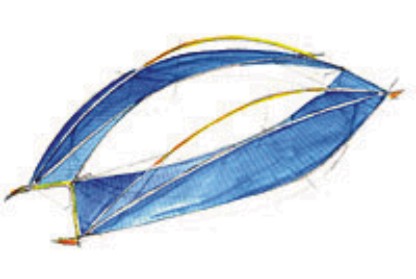 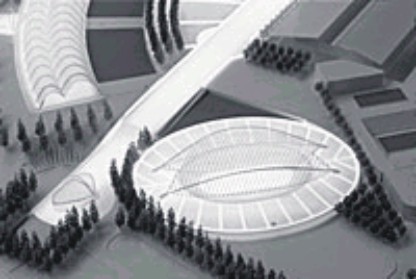 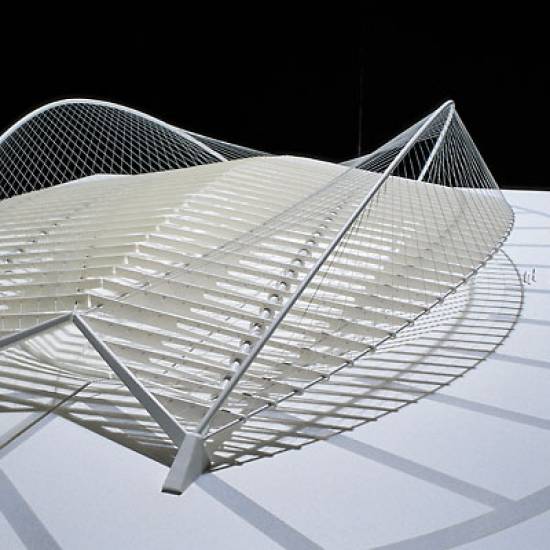 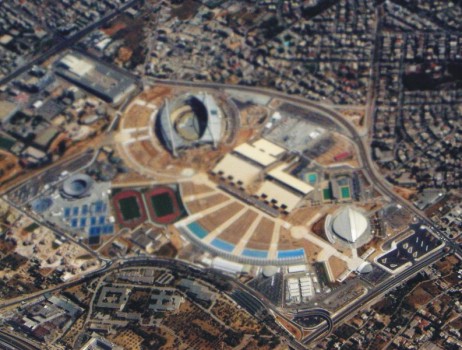 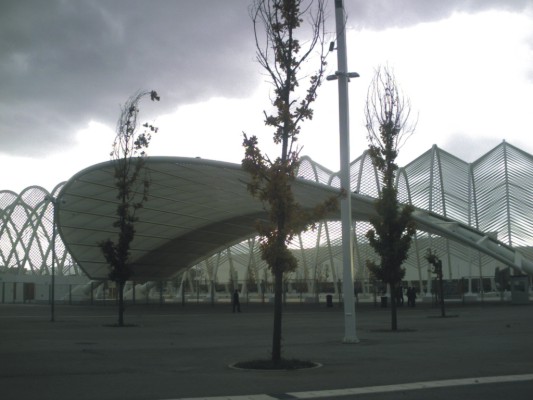 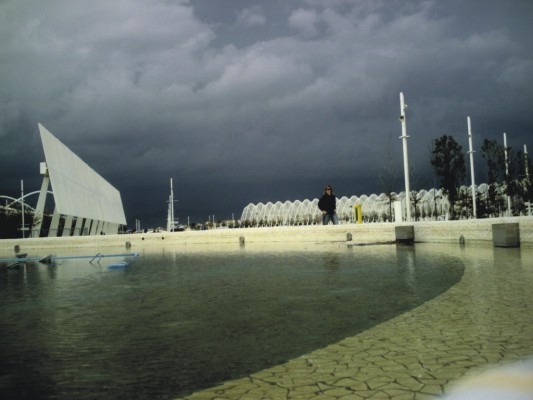 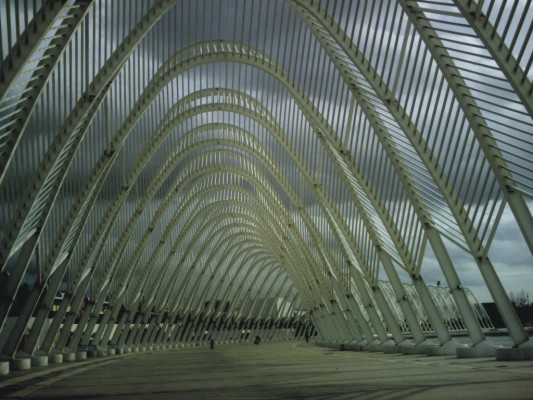 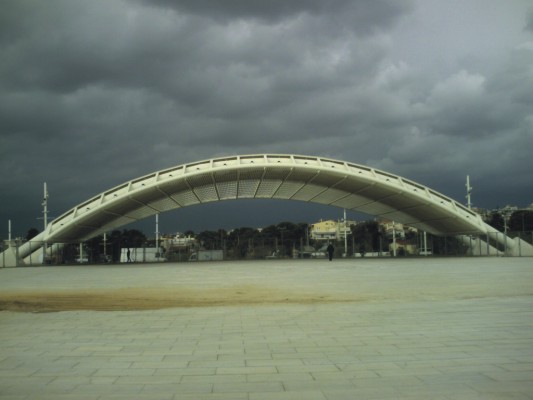 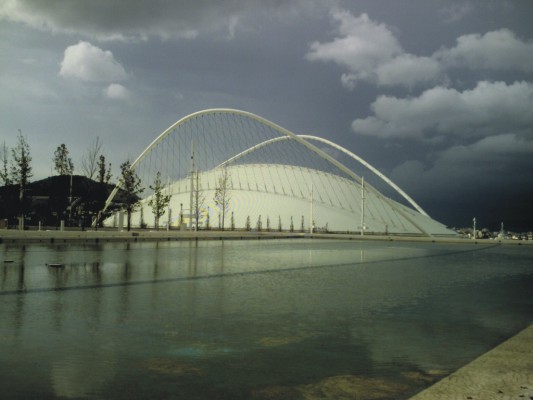 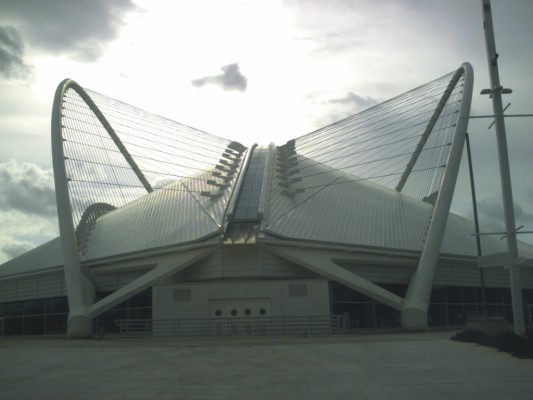 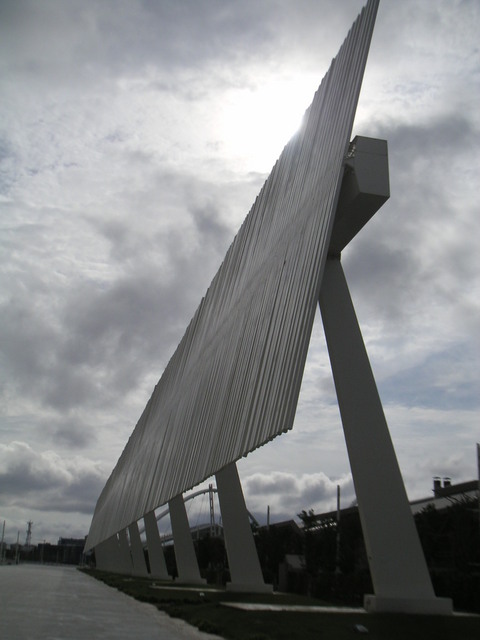 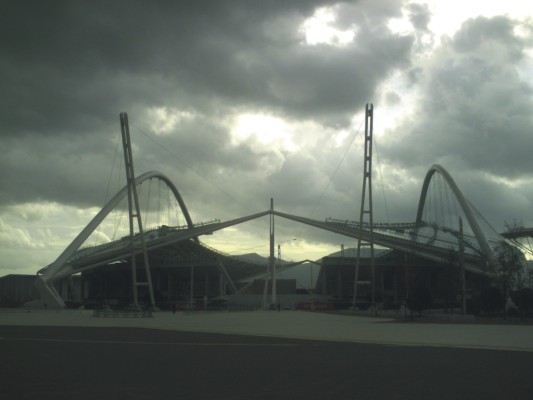 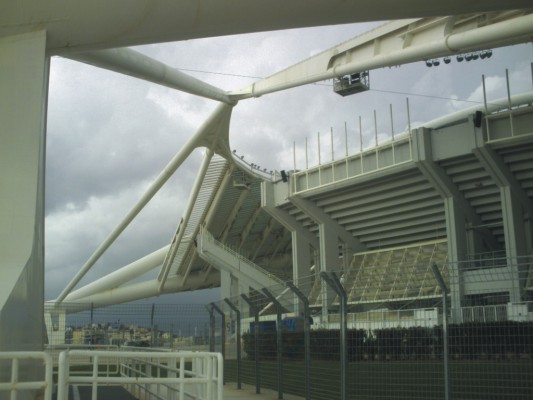 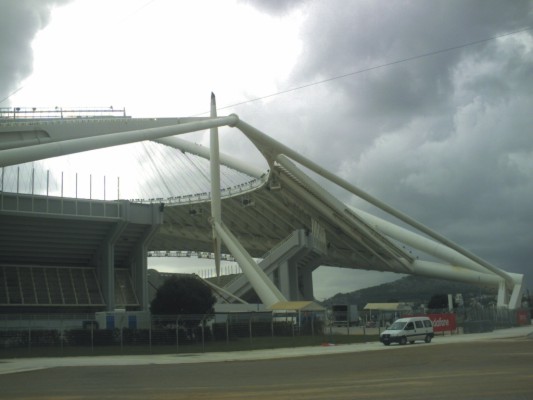 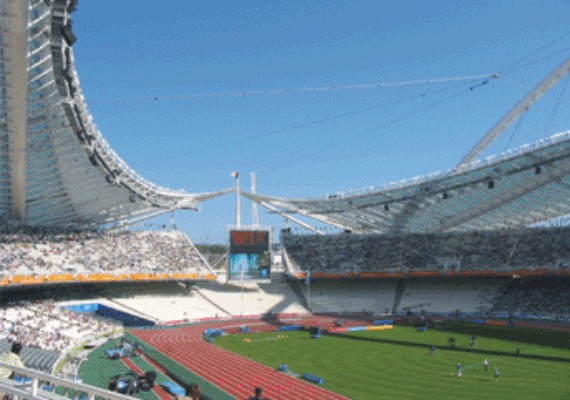 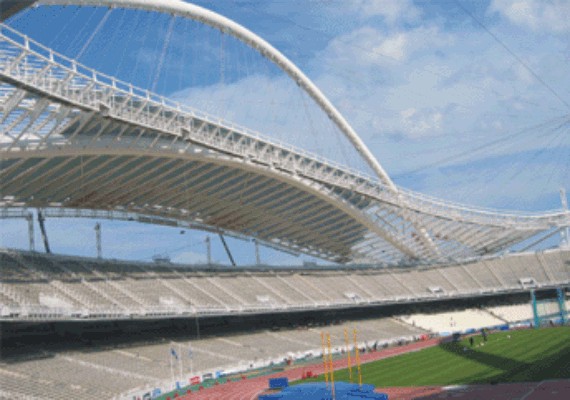 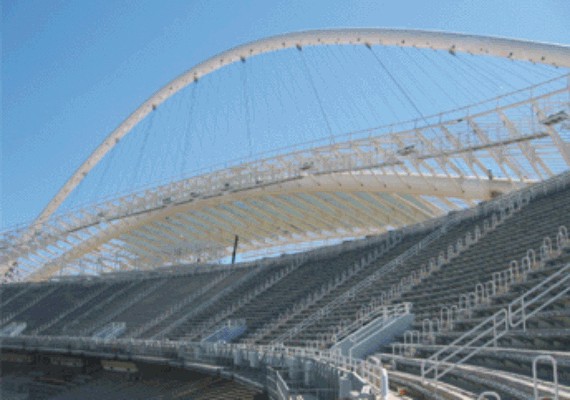 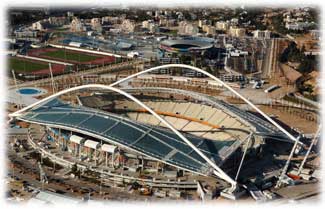 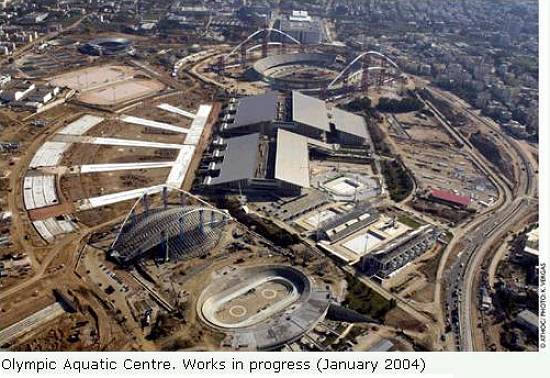 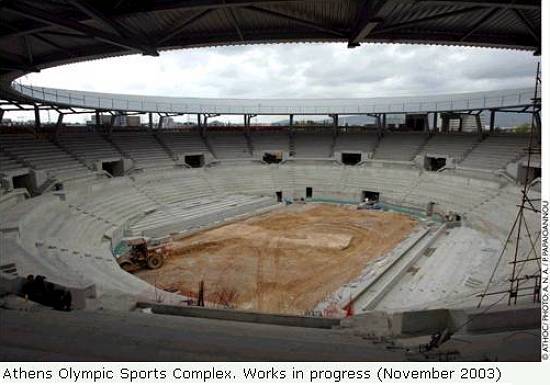