The building is nestled in the sports area ofArnedo town of La Rioja. In an architectural design are of great importance are the conditions or qualities of the place. Therefore the Arnedo Arena comes from the idea that evokes the city and its surroundings, nestled in a valley and surrounded by walls of a typical red clay where they appear artificial caves carved by man. The valley is framed and enclosed by a set of hills where there is vegetation and crops.

In the Arena Arnett have a nonnegotiable condition, the bulls are circular enclosures. The composition is adapted for both the circular. The connection elements connecting the different parts of the multifunctional building.

So the idea that evokes its setting yields a building that is twinned pieces together, (as does the mountain Arnedo), welcoming inside the stands and in the ring. The program of these pieces that create the project, is diverse; lining, skylights and vents in the bullpen, toilets, cafeteria, snack bars, restaurant, VIP boxes, gold shoe museum, etc., ie the idea matches or multiple combinations.

To take these pieces use two materials that communicate seamlessly with its environment monolayer simulating rough cuts of our city and artificial turf as an allusion to crops that for years gave the livelihood of its inhabitants. On the other hand uses two materials that refer to people with emotional burden, one is the stone in honor of the human hand has transformed the city and other people making the plate in reference to the industrialization process has been the city through the efforts of its inhabitants.

The building is spread over three floors. The height 0.00 m is the plant where space is developed ring and all the spaces needed to develop the phenomenal, such as pens, yards, warehouses…… The second floor is the height 5.25 m and is the corridor leading from the street than half of the bleachers, addressed through this corridor access for people with reduced mobility. And finally at elevation 12.15 m develops gold shoe museum and restaurant overlooking the city and the arena.

1. Foundation.
The foundation is composed of a base made of cyclopean concrete about 2 feet to get a firm improved poyando these bases in the gravel.
On this is placed on the corresponding conventional shoe that start the pillars.

3. Stairs.
They are concrete and corrugated tubes run inside 20 mm wiring emergency beacon.

For the walls have been used concrete blocks of dimensions 20 cm by 40 cm and a thickness ranging from 9 cm, 14 cm and 20 cm depending on the height of the wall or if it is charging.
The 9-cm was used in sections of less than 3 meters height changing it to 14 cm when it exceeds this height.
The 20 cm has been used for walls.

For the exterior has been used four coatings, stone, sandstone from Sandstone Company pines. The thickness is 2 cm and has been placed with two stainless steel clamps placed above and below a diagonal and tail cement and stone exterior support.
Artificial turf with glue placed on support and grass.

Galvanized sheet metal plate is placed 0.6 mm in some volumes covering battens screwed to the block wall. In two panels are placed the same sheet but perforated, for aesthetic purposes and to promote space ventilation.

Monolayer, this coating has a staff attempted to imitate the mountains, and the flashing has been placed with little flight so that over time this material is stained dark and becoming more similar to the mountainous environment.

The decks were waterproofed with a bituminous mastic modified heat curing and in situ, applied in two layers separated by a polyester film. Polibreal called.
This product supports an elongation of 1000% therefore supports the settlements that can undergo the building effectively.

This material must be protected from the sun so it has arranged a 400g/m2 geotextile and gravel above it.
Means reed is protected with aluminum foil stuck on hot polibreal.
In the covered passage is provided above the fabric and decorative concrete.

Was run with plywood and metal braces for the main beams and plywood for other beams and rafters.

The housing package is composed of fir flooring 22 mm separated 1 cm between them to be a sound absorbing surface by fleecing and acoustic blanket between galvanized strips on which is mounted galvanized steel enclosure. There are 8 60×60 mainstays that start in the foundation and 28 pillars to support the radial beams.

The retractable roof is executed with plywood, metal braces and polycarbonate covering.

The engine was made by two parallel metal rails HEB 200 fixed and level on the deck running with three wheels on each side of steel. The movement provides two 2.5-hp motors, one on each side acting on the set of the zipper cover.
They have placed two variable frequency drives to control the motors give the same round, the startup is smooth and braking too.
There are four limit switches, a physicist who is two beams as a stop, another set in the inverter and electric motor or switch mode that is activated by passing the cover for him. 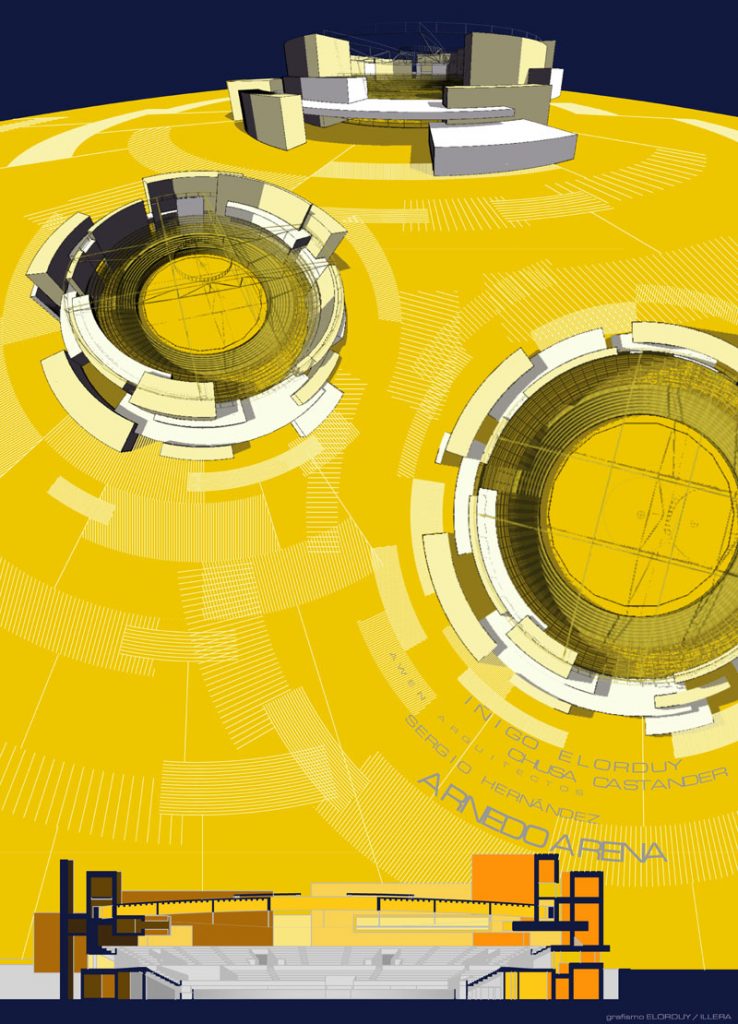 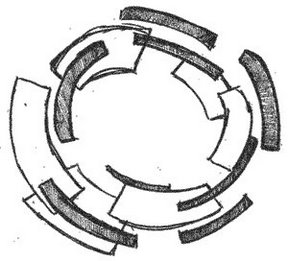 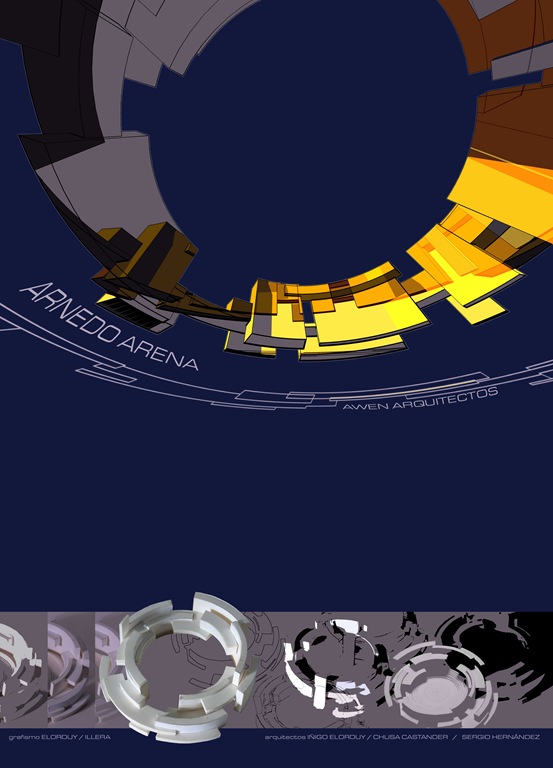 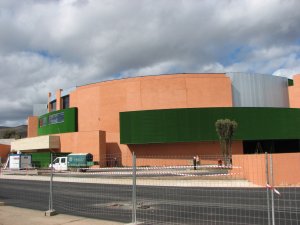 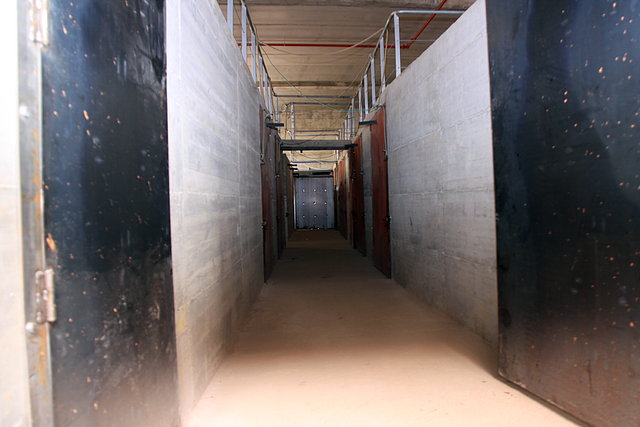 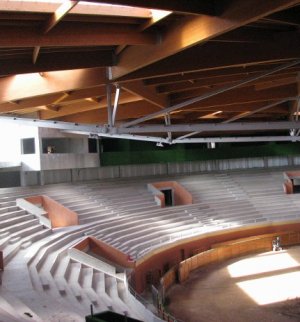 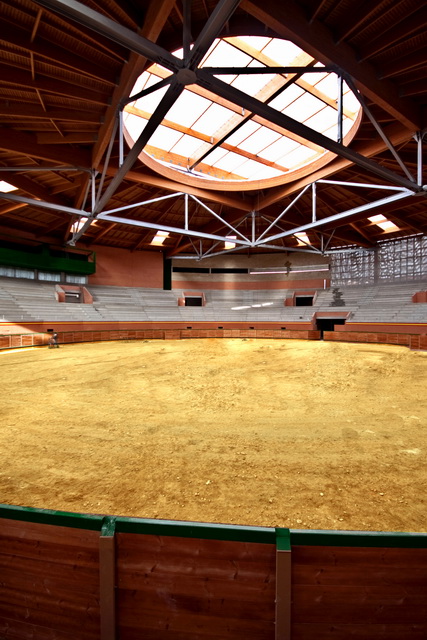 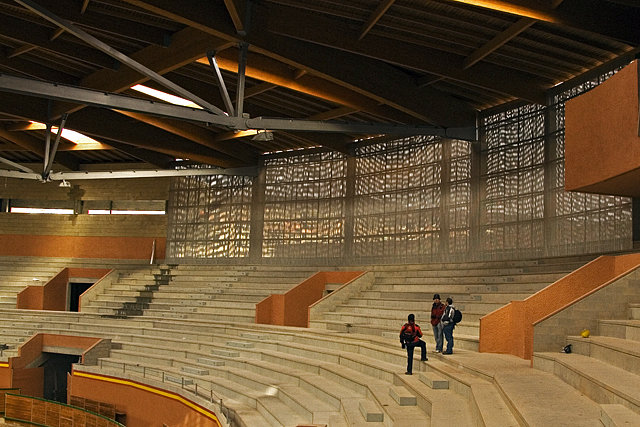 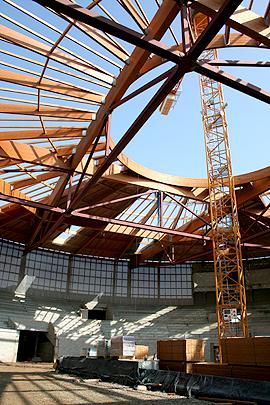