Located in a strategic point of the city, the gateway improving urban connections between neighborhoods north and south of the Spanish capital, while creating a new venue that allows you to rest and admire the city. For the city council, the Gateway Arganzuela has become an architectural event for the city and a city landmark powerful.

A portion of the runway of 278 meters long, crosses the river Manzaranes, the other is displayed on Arganzuela Park, below which runs the ring road of the city of Madrid, Spain . This construction is part of the new urban plan of the city, called “Madrid Río”

Due to the geographical position of the gateway, it acts as a viewpoint from which you can see the famous Bridge of Toledo, built between 1718 and 1732 by architect Pedro de Rivera. The new gateway is between the bridge and Prague Bridge, linking the district of Arganzuela with Carabanchel.

The first cone, south, extending from the Avenida de Manzanares, crosses over the river and then joins the top of the hill.
Offset from the first cone, the second in the north through the rest of the park until the Paseo de Yeserías.

These two cones found in the top of the land does not have a continuous axis, are offset from each other. The pedestrian can choose from when it reaches the end of each of the routes, cross platform meeting to continue to the other cone or use the new entrance to the park.

The helical self-supporting structure, cone-shaped, is formed by two internal metal intertwined spirals crossing diagonally and whose ribs are wrapped with metallic ribbons. Slats of wood apart form the ground, thereby allowing the sun to pass through and illuminate the remaining part of the park below.

The bridge consists of two sections, the first 150 meters long provides 922 m² and the second 128 meters, 762 m², with a width ranging from 5 to 12 meters, separated by a winding path that gives access to the rest of the park. The architect played with the topography, seized a large curve to create a new access point to the park and a bend in the path of the bridge.

The foundation of the bridge combines some stretches of deep piles or micropiles with others made directly on the screens of the M30 tunnels passing underneath.
Each of the cone rests on two pillars at each end, giving the impression that the walkway floats in the air.

The supporting structure is steel, wrapped with a silver ribbon made of metal mesh that protects pedestrians from the sun and weather. “Sewn” as a spiral, these tapes create a rhythmic dynamic online for the park.

This stainless steel wire mesh, a favorite material of the architect, transformed the catwalk by time of day, alternating filtering, reflection and opacity. This diurnal light shading game becomes overnight.
The floor of the two cones was made with wooden slats.

Inside the southern cone were placed 17 lampposts, north 15 below the platform 35 outbreaks in the Southern Cone and 31 in the north. 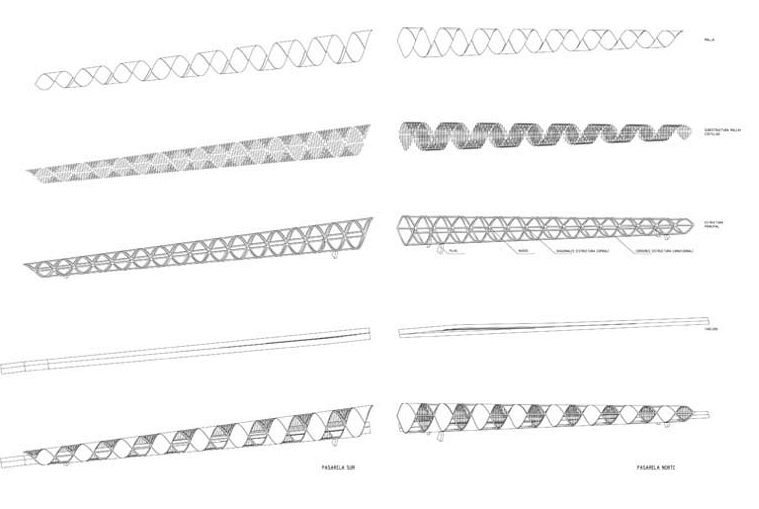 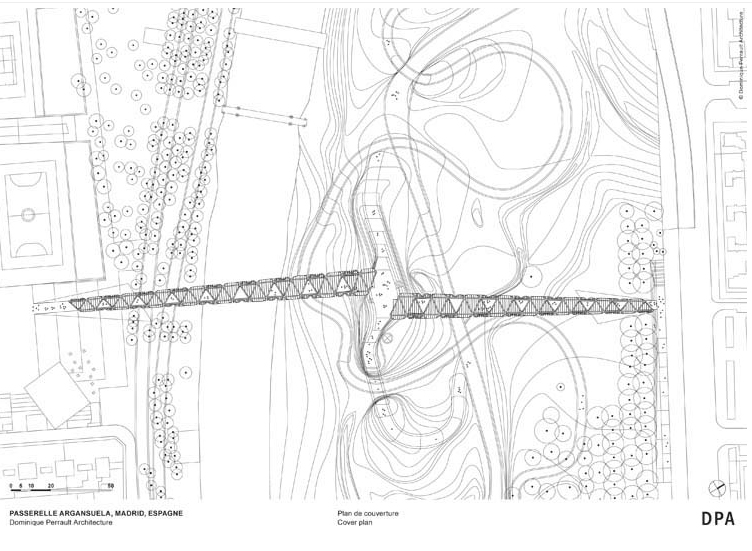 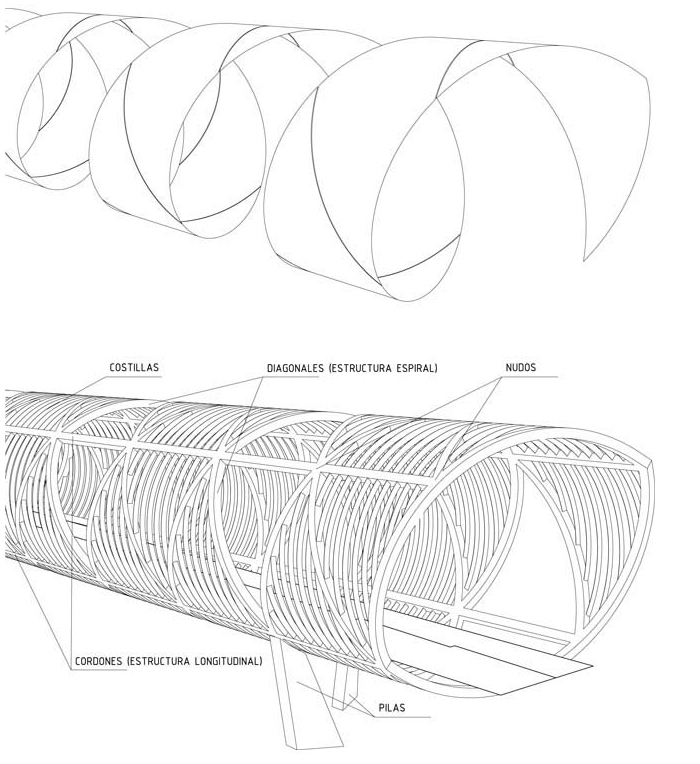 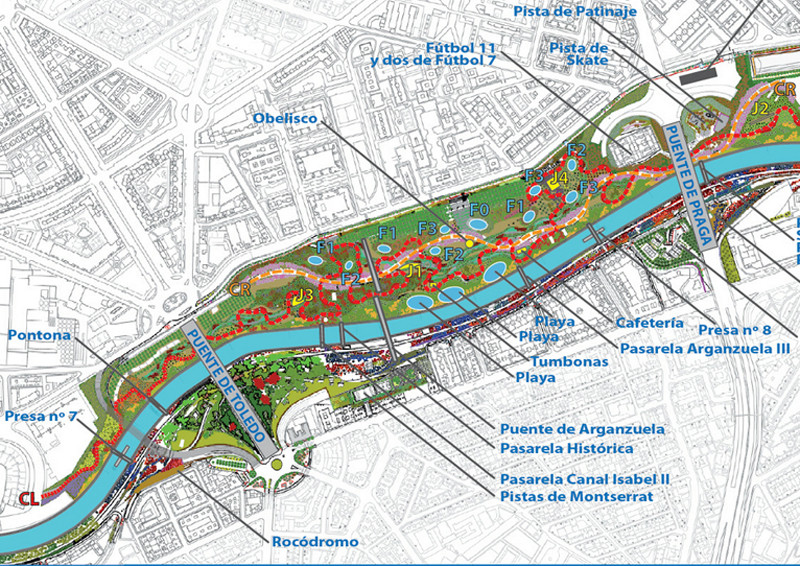 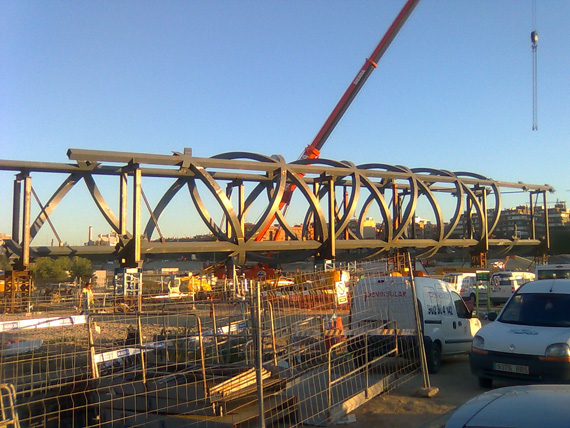 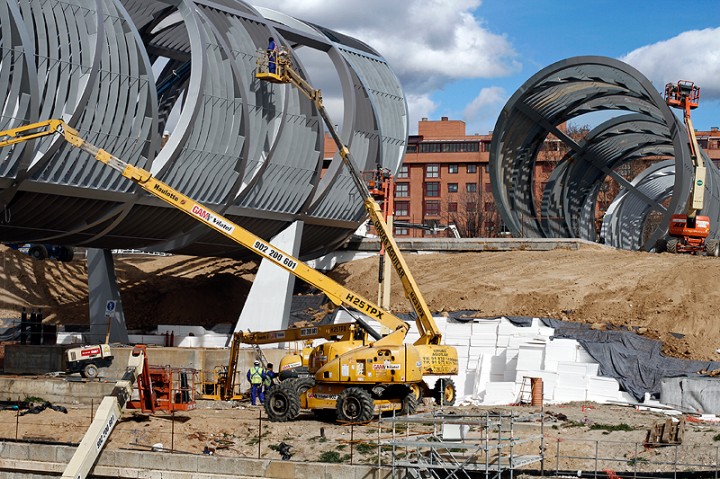 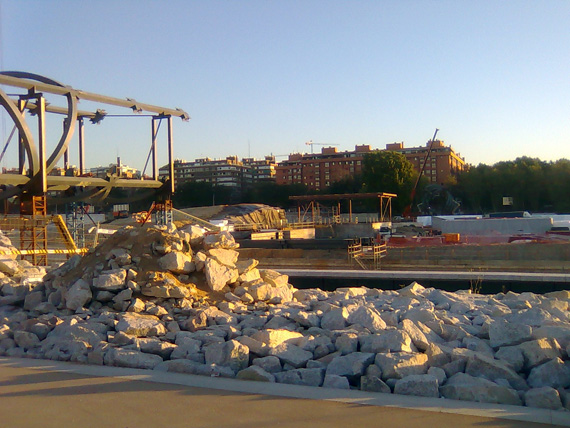 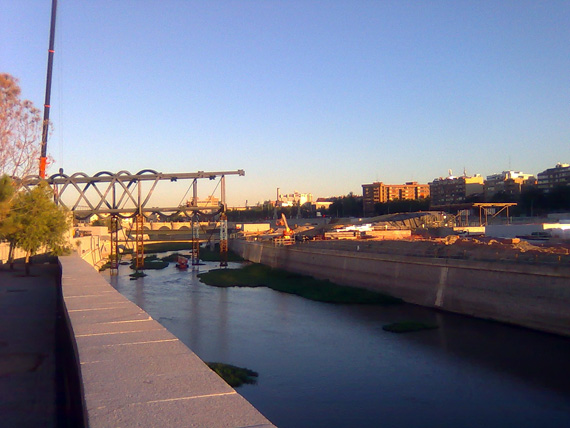 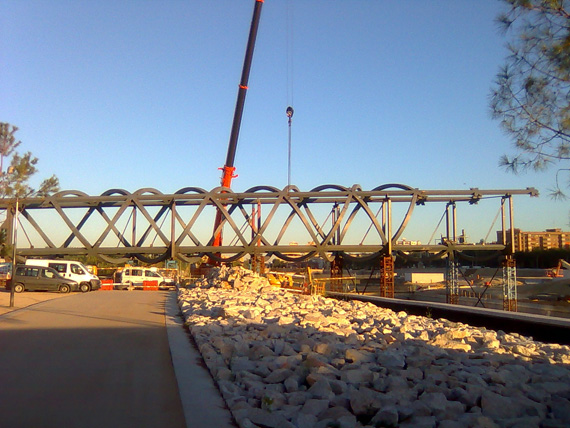 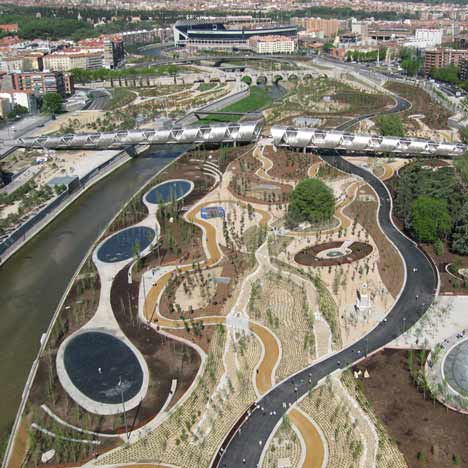 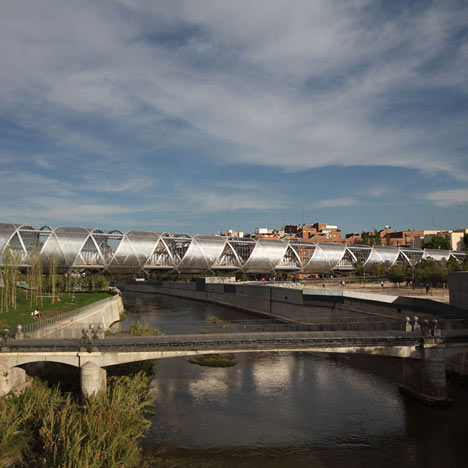 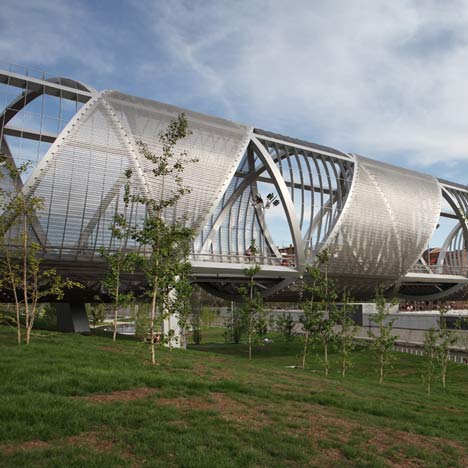 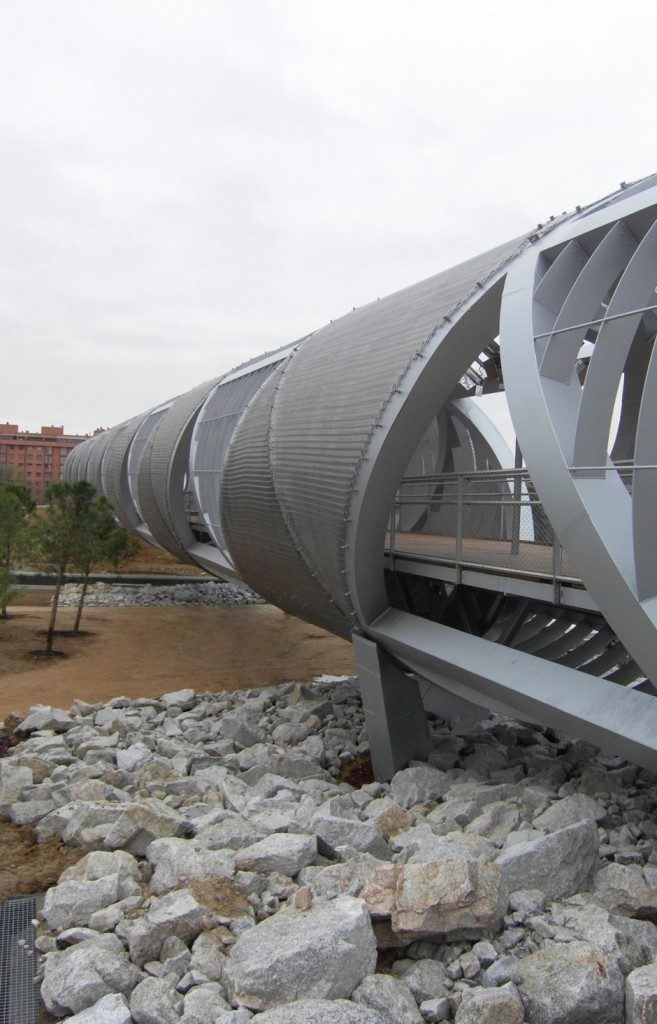 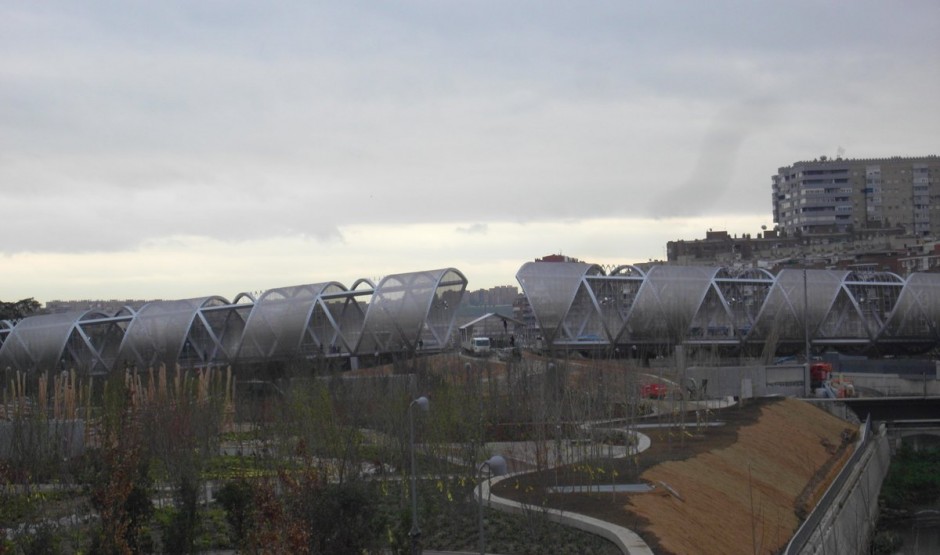 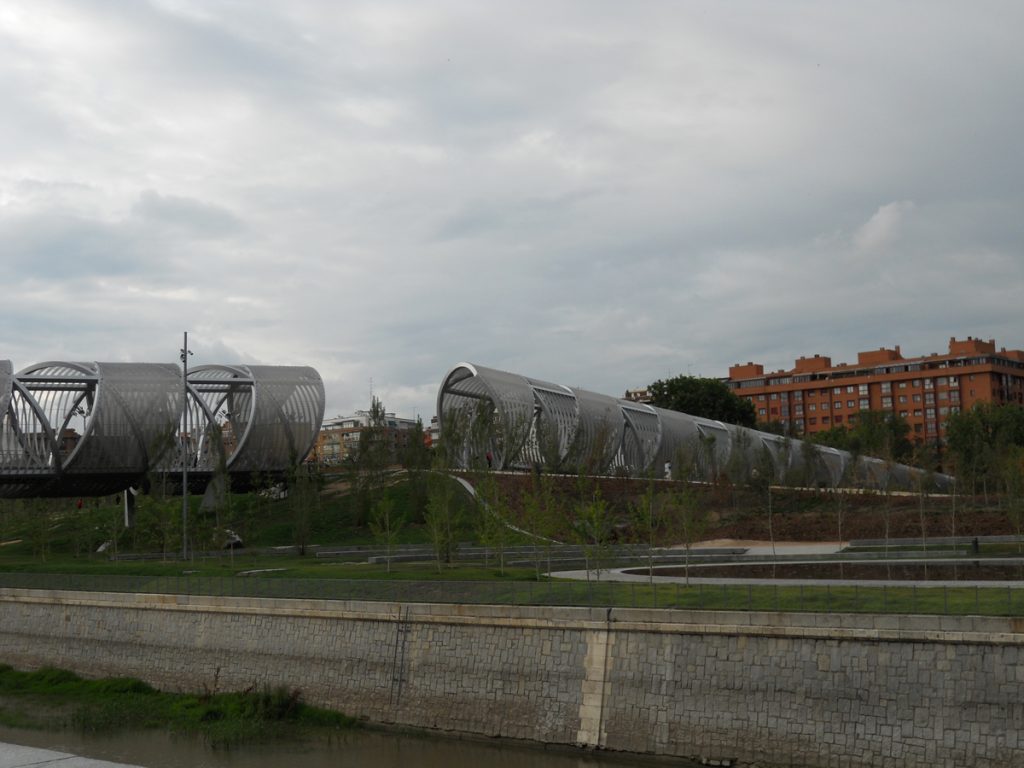 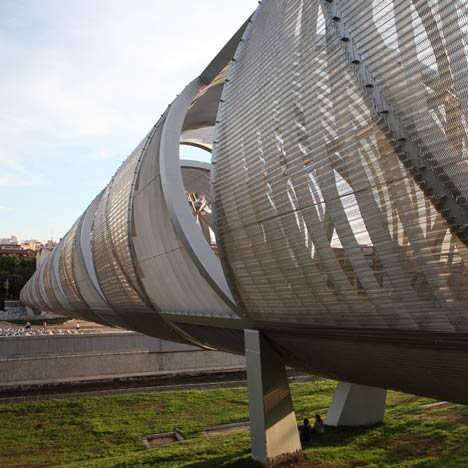 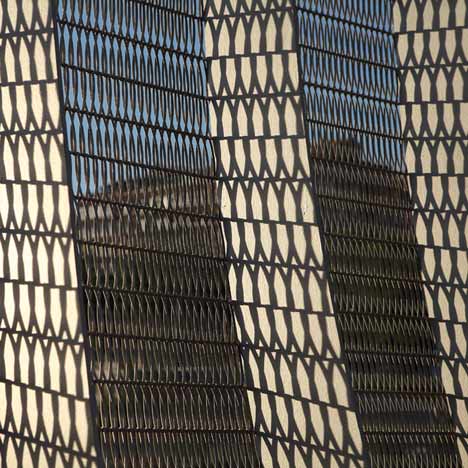 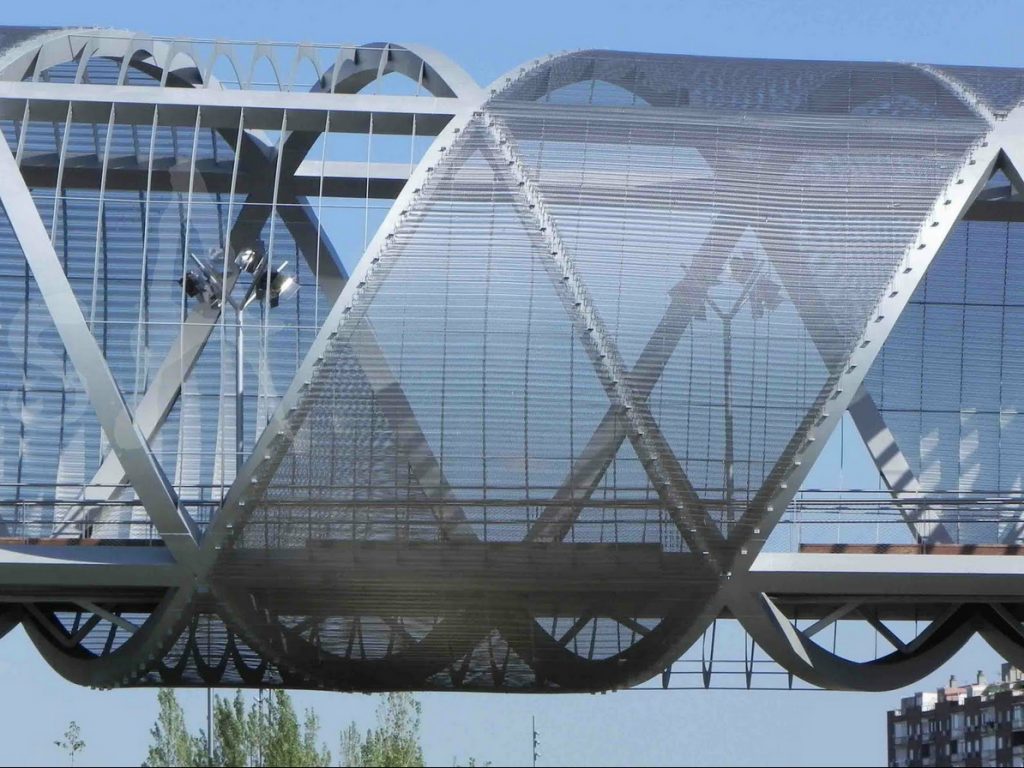 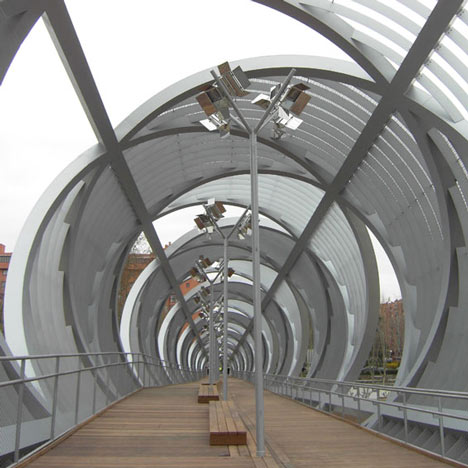 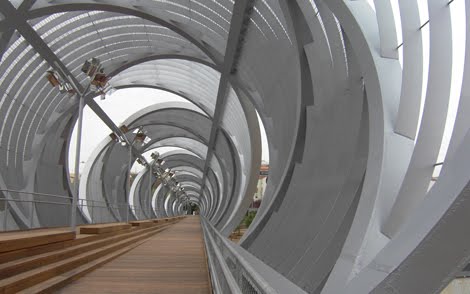 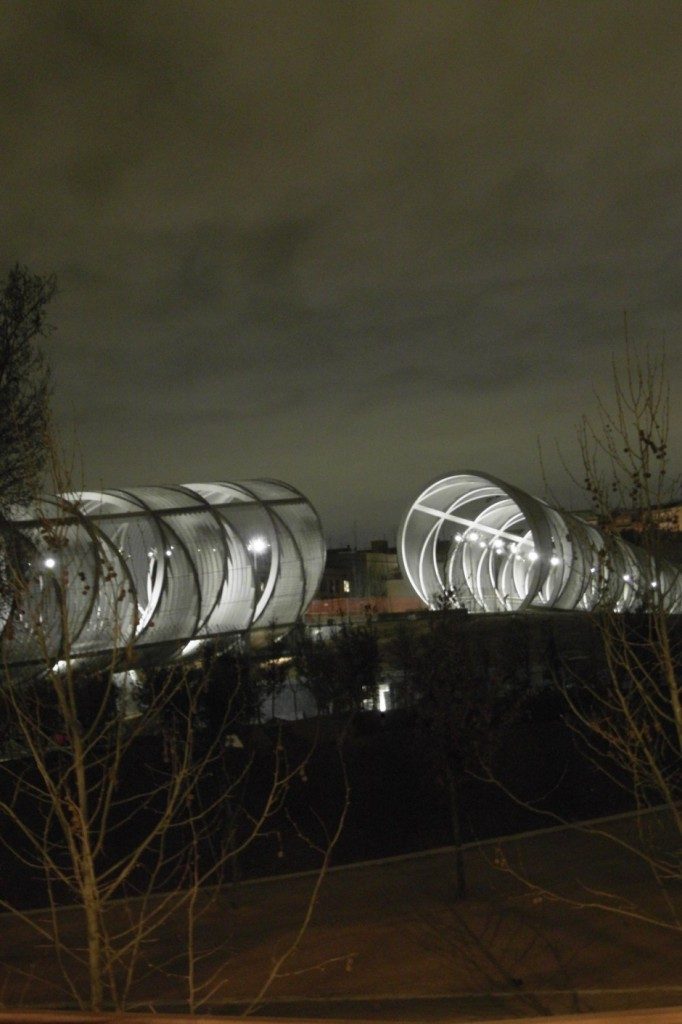 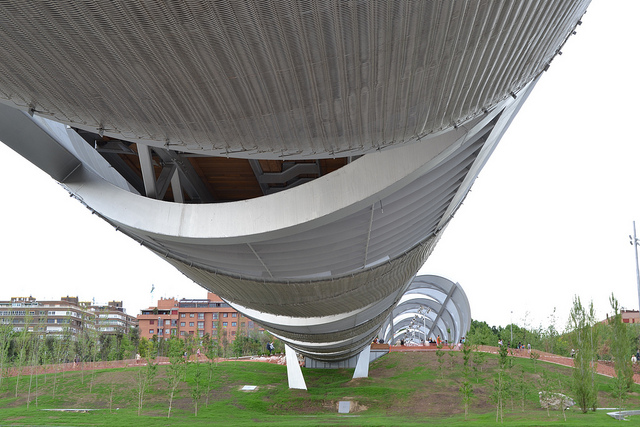 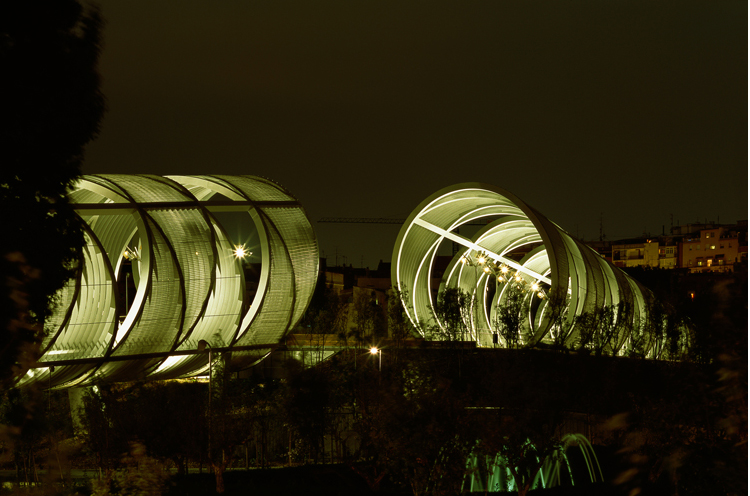 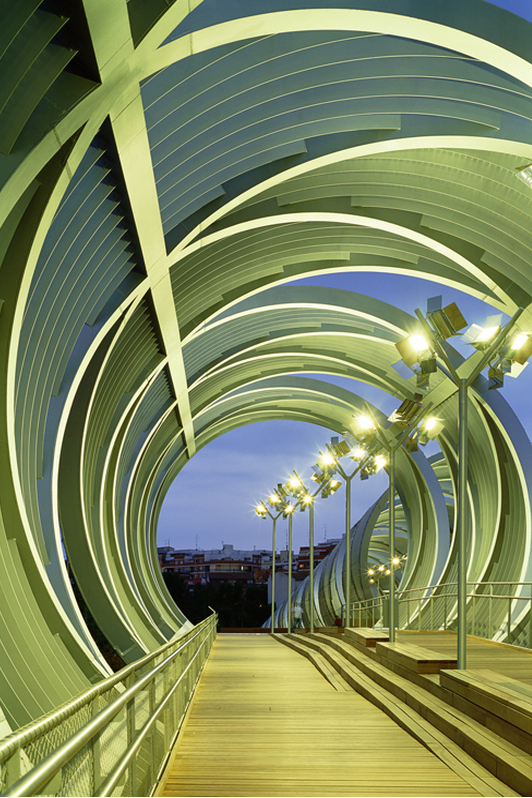