A customer illustrated, belonging to a family with an ancient pedigree wine has asked Archea Associati studio, that through architecture, get improved and the surrounding landscape, as an expression of cultural and social values ​​of the local production wine. The functional program is therefore fully integrated into a design process focused on geomorphological trials for a product with industrial manufacturing, as the truest expression of a symbiosis between human culture, the work of man, his environment and the environment naturally.

From the opposite hill, across the valley, only two horizontal bars are made ​​with glass and steel, the rest is on the inside, under the framework of the new vineyard which has been planted recently to cover it up. It is an impressive piece of architecture made ​​by Marco Casamonti, with 28.000m2 covered and 49,000 built.

The project area falls within vineyards in the rolling landscape of the hills of the Chianti region of Tuscany, on the road between Siena and Florence on the side of the Strada Nationale 2, San Casciano in Val di Pesa, Italy. Landscapes that hidden inside a winery in deep relationship with the land

The physically and conceptually winery focuses on his deep roots with the land, a relationship and suffered somewhat exasperated, even in terms of economic investment, to bring architectural image fusion and even protect her. The whole project revolves around the relationship between landscape and architecture, creating a fuzzy boundary immersed in the beauty of the region. The architectural Archea Associati shaped Bodegas one of the noble families of [ [ : Category: Florence | Florence ] ], winemakers whose origins date back to 26 generations, the Antinori family, creating a relationship between the work of man, its action environment, wine culture and landscape and achieving a reconciliation between him and architecture.

The 49.000m2 built the winery Antinori were conceived as an imaginary building, whose body purses with the folds of the hillside. The stepped roof is completely covered by farmland and a couple of openings, such as glass -filled slices are those that reveal the presence of the structure.

” The vessel had to express the essence of the” content ” : a product that was born and developed from the ground as the synthesis of a job, a tradition, a culture that is deeply connected to the agricultural landscape and the natural environment. The image and content of the new winery evoke this indissoluble radical intimate connection to the land, to the point of being hidden by, and merging with the earth. The conceptual construction has taken the form of a “volume” that is built completely underground, that by hiding all the elements that are often part of urban construction, trying to achieve a difficult but necessary reconciliation between the natural and the artificial. The result is a new area of ​​land covered by vineyards, marked by two horizontal cuts, following the curves of the hilly land, rise to allow light to enter, and to provide a view of the surrounding landscape.
The “front” of the building, which extends horizontally into the hillside, is defined by the row of roof designs and all cracks that it reveals, without ostentation. The “heart”, the rhythmic sequence of underground vaults that store, in the dark, the product during its preparation. Far from mimetic attitude of resignation, this work has the physical denotations and connotations of the idea historic winery, suggesting the conditions of an ideal interpretation of functional roles and expressive possibilities “. ( Archea Associati )

The project integrates the building into the landscape, along with the industrial complex is hidden by creating a cover that defines the invention of a new plane of cultivated land, a vineyard, and draws along the contour lines two horizontal, letting in light and framing the landscape through the definition of a diorama as shown and described. The facade then extends horizontally across the natural slope marked by rows of vines that constitute, together with the land, the system of “coating “.

The openings, with the consistency of slots, without relief, reveal the inner Underground : along the upper spaces are distributed offices and exhibition areas, structured as a lookout on the winery and winemaking areas.

At the bottom lies the bottling and warehouse, is protected heart of the winery, where the wine ages in barrels, captures the diffuse dark and rhythmic sequence terracotta vaults, the sacred dimension of a hidden space that creates optimal conditions thermohygrometric in the slow process of product realization. Reading the architectural section of the building as the joint evidence altimetry is the way to production, by gravity, of grapes, from arrival at the fermentation tanks to the cellar where the casks. This route is the reverse by visitors, which from the parking elevator up to the winery and vineyards, through the production and exhibition areas, ranging from the mill to the wine bar and restaurant, located in the same plant that houses the auditorium, a museum, a library, tasting rooms and the possibility of buying direct. 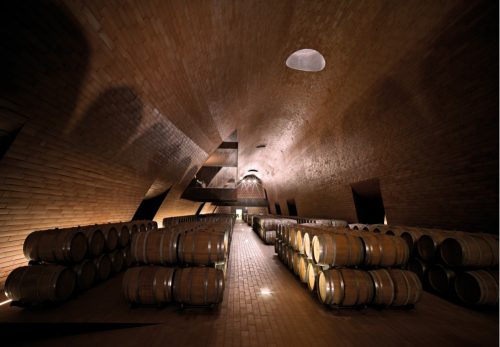 The inside of the warehouse is divided into two main floors with different levels. The lowest levels are dedicated to the storage and production of wine, while the upper level contains visitor facilities including a museum, a library, an auditorium with capacity for 200 people and areas of tasting and purchase.

The double height wineries are arranged in three rows and the walls are covered with mud everywhere. The architects describe these rooms as ” the isolated heart of the winery, whose dark and rhythmic sequence terracotta vaults, carrying the sacred dimension of a space that is hidden. ” 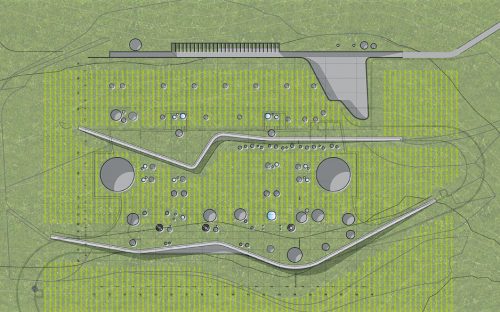 The administrative offices and part two levels are in the upper deck, are marked by a succession of courtyards that receive light through circular holes arranged in the vineyard covered serving. This system is also used to bring light to the guest house and caretaker’s house located on one of the sides.

The large panoramic terrace of almost 109m2, on the other side of the glass wall of the upper floor under a roof is curvilinear and is crossed by the large spiral staircase ascending from the underground parking to the balcony on the vines.

Were excavated almost 15ha of vines to construct the building and then covered him with earth removed and reseeded strains. As a result the pool is part of the landscape of the countryside, nature is adapted to the industry which in turn is reconciled with its environment.

” The physical and intellectual construction pivots the winery on deep -rooted ties to the land, creating a relationship that is so intense and sustained as to the architectural image is hidden and mixed in it,” says Archea Associati.
Circular apertures puncture the roof and floors to bring light into the depths of the building. A vacuum contains a spiral staircase that connects a terrace on the upper level with the vaults below.

The materials and technologies used simplicity evoke local tradition, expressing the theme of simplicity naturally sought in the use of clay, and in the opportunity to use the natural energy produced by the earth to cool and insulate the basement, creating climatic conditions required for the production and fermentation of wine.

Used mostly in circular forms, such as the impressive spiral staircase from the entrance, a masterpiece of technology. Also takes center stage in the forward curves partially covering the terrace or in the shields of internal stairs.

The conference room is made with oak walls and large glass reception are creating a sense of “openness and grandeur “.

Terracotta bricks used inside the basement, ” cotto ” Impruneta ” come from this district of the province of Florence of which are named, and help keep the temperature at a constant level, perfect for producing and añejar wine.