We would like to make “the most beautiful building” for the Museum of the Memory of Andalusia in Granada. The MA. A museum that wants to transmit the entire history of Andalusia. Already in Roman times, Strabo described the inhabitants of Andalusia as “the most cultured of the Iberians, with laws in verse.”

The architect Campo Baeza MA Project headquarters building in continuity with the Caja Granada Headquarters that they ended in 2001. Proposed a 60×120 m podium building with three floors, so that the upper level coincides with the podium in the main building of Caja Granada. And also align their facades. Everything is organized around a central courtyard elliptical trace which develop spiral ramps connecting the three voltage levels and creating a space of interest. The dimensions of the elliptical courtyard is taken from the courtyard of the Palacio de Carlos V at the Alhambra.

To top it off, like a city gate they were there emerges a strong vertical piece of the same height and width of the main building of Caja Granada. It thus appears opposite the Granada ring road as a large front screen capable of transmitting messages via large plasma screens that cover entirely. As Picadilly Circus in London or Times Square in New York.

And to finish the operation, a large horizontal platform to the river, the CAMPA MOU will serve as reference public space in that new area of the city of Granada.

The new building, silent form, is striking in its entirety for the transmission of messages of a new millennium in which we are immersed. 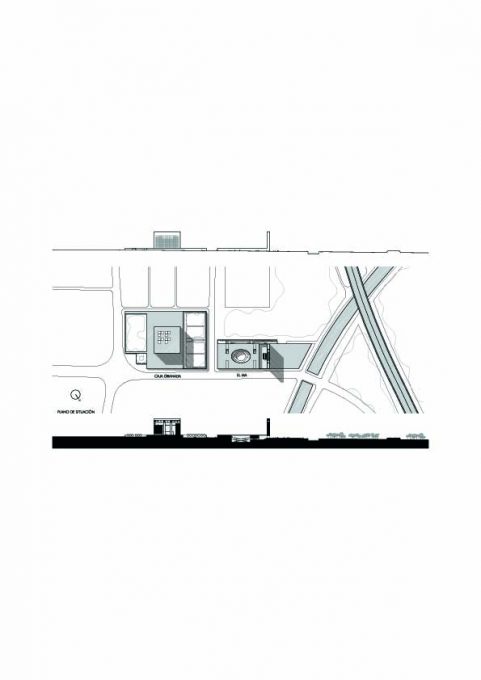 The Museum is located on Avenue of Science s / n, near the headquarters of Caja Granada, Granada, Spain.

The site, with dimensions of 132×63 meters and covering a rectangular area of 8315.90 m2 is located in the confluence of the Genil and the ring road to Granada. The plot down 3.60 meters from the northeast corner to the Southwest corner.

As a starting point raises a silent building, without competing with the case and talking with him, character and entity has its own and be able to express their content, be able to convey the cultural message of the Center front to the city. 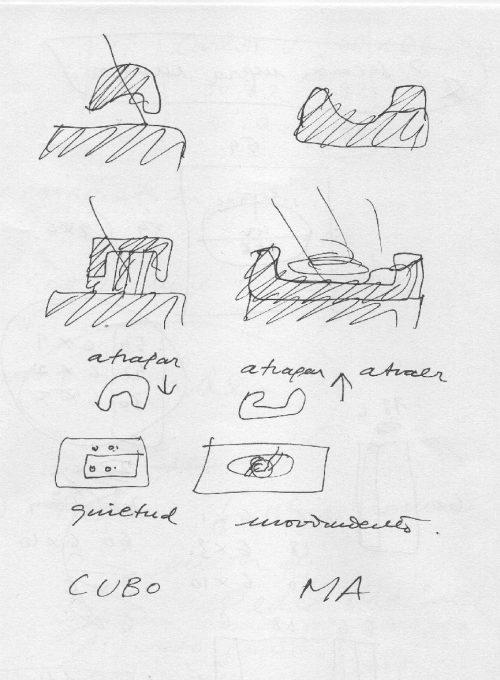 It builds a large horizontal concrete box that takes up the entire solar plant and podium height matches the base of the Central Building of Caja Granada whose main street facade is aligned with the front of the podium. The building is built “inside” in 3 levels that meet the steep slope.

It is proposed to erect a large screen, facing the Granada ring road appear as the “visible face” of the new building and continually set the cultural messages that the Fund wants. The large screen on which concrete may be placed high definition displays in its western side will be like the great door of the building. The door to the new part of the city from the highway. For the large gap will enter the intermediate level of the building as is given to us in a natural way by the topography. 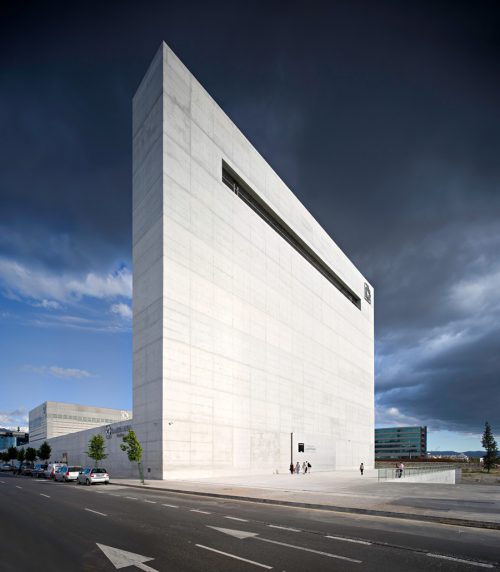 Height: Ten plants, 50 yards from its base, 40 meters from ground level. Coincides with the height of the Caja Granada Headquarters.

In the last plant is a lookout with magnificent views of the Alhambra, Sierra Nevada and Sierra Elvira.

The character of the building will be very compact. It does so by an envelope of concrete walls, consistent with the building of Caja Granada. Display only or giving open courtyards sized holes in line with the large scale of the project. The central interior patio enclosure will be white. The dialogue with the Caja Granada building is accentuated by the cover treatment of master volume, with a floor similar to the podium of the Fund, in reinforced concrete slab with floating floor solution. The two staircases giving access to the deck, emerging without shaping a volume, so as to accentuate the serene and sober character of that great horizontal plane. Inside the building, mainly white finish both their vertical walls (painted plaster) and in floor tiles, marble cutting Macael with modulation according to the project. The ceilings will be resolved with plaster ceiling painted white. 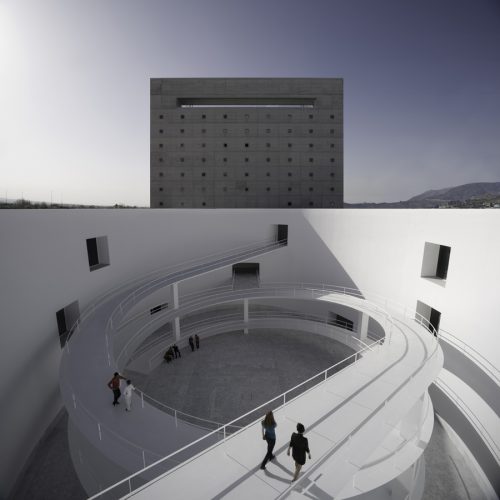 It is a white space that distributes the internal circulation of the building space is stealing the limelight. Its dimensions match the inner and outer diameter of the Palacio de Carlos V.

Through the western facade on the building screen. There is a previous platform, the FIELD MA, that will reach the river Genil, forming a large public square.

The spatial and functional organization of the building responds to the synthesis of a building yard and a longitudinal axis that runs from northwest to southeast. The spatial sequence is as follows: from a broad platform in the northwest corner is accessed through a monumental door open at City Screen, descending a staircase we are in the entrance courtyard, from which you enter the museum finally, in the southeast lies the theater piece. Podium Building has three floors (access, first floor and garden).
The functional scheme is completed with a side yard service, giving the southwestern edge that takes the entire length of the building. Well resolved, first, general access to lower level stores along with the maintenance of facilities. Communication between the lower level of this court is resolved with two separate cores external staircase and download platforms.

Modulation of the project plan responds to a general frame of 6 x 6 m. The structure of the main area of museum and exhibition has 9 m spans of crosswise. The two tablets of service to the main building with toilet facilities and communications centers as well as the building screen, are resolved in a corridor of 6 m in width.

The entire volume has a size of approximately 114 m long x 54 m wide. The total height of the Podium building from the lower level will be 15.30 m. Measure it from the exterior grade will be about 6.25 m at its worst. As mentioned above, it checks the heights of the podium building Caja Granada and the main volume of the new museum. And similarly, between the crown main body of Caja Granada and Display Building. 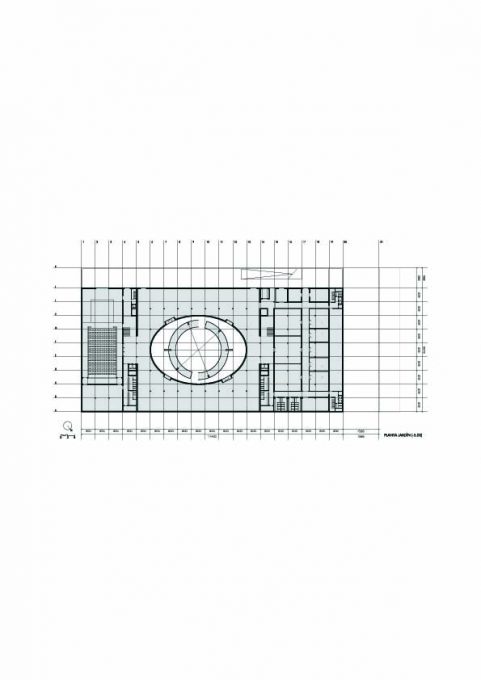 Inside this building, while silent in its forms and striking in its transmission element, including the roles that we ask:

Ground Floor (at level 0.00) poses the main entrance to the building. The entrance is through a large hole in the screen proportions practiced. From northwest to southeast, the intended uses are: cafeteria and reception in the building screen, patio access, admission to the museum, with two bays for administration and services; space museum’s main courtyard service module, and theater, which occupies the three bays of the southwest corner. 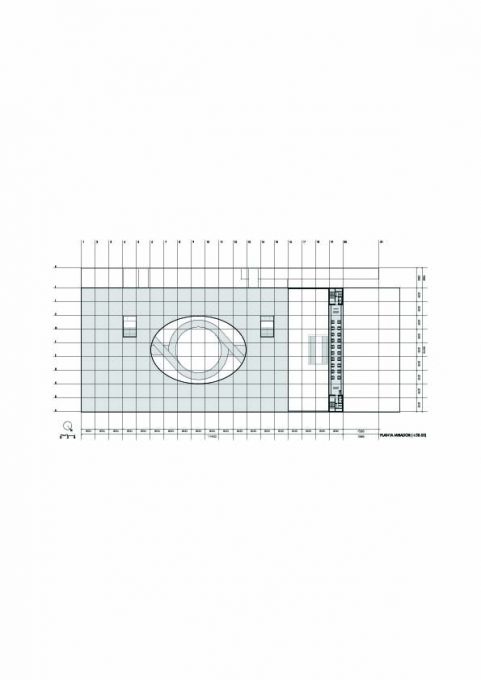 On the first floor (at level 5.00) provides for the temporary exhibition area of the museum, and independent access to the theater. This occurs near the southeast corner of the building across the street and José Luis Pérez Pujadas.

Campo Baeza proposes a courtyard where the circulations between the three plants were developed through a ramp becomes the protagonist of the building space. The trace helical ramp contained in an enclosed yard elliptical trace produces tensions of great beauty.

This central courtyard is clearly indicative of both their type as their dimensions, the circular courtyard of the Palacio de Carlos V at the Alhambra, Machuca, who speaks of the effectiveness of a patio open in Granada. 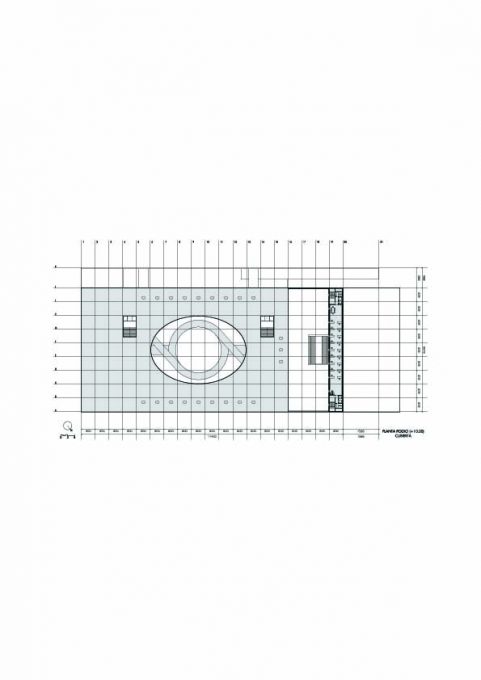 -Podium Building has three floors, two of them underground. From a structural point of view consists of a reinforced concrete perimeter and an interior grid of pillars supplemented by concrete bearing walls required to provide adequate response to the horizontal loading of seismic origin.

Building, Podium, unlike in the building screen is projected with waffle slabs of reinforced concrete columns, perimeter walls and interior walls. The interior walls form the core of elevators and stairs are also part of the structural separation between bodies.

The pillars are embedded in a rectangular grid predominant module 6.00. In the exhibition area extending to 9.00 m the dimension of the grid in one of two directions.
The block waffle slabs are missing and are projected with a rib width of 16 cm and 86 cm interaxis. The song is 30 5 cm in areas with lights 25 9.00 m 5 cm in the rest.

1 – The area of the theater, which develops in triple height and a single span, covered with lacquer on steel trusses supporting honeycomb of 18 m span. These trusses supported on a continuous concrete wall and in alignment with interior pillars. At the level of the lower cords of the trusses metal profiles are arranged perpendicular to them about what is going to support a substructure that allows light enabling this space as a technical area of the theater.

2 – The double helical walkway that takes place in the elliptical courtyard. This footbridge, metal in its entirety, consists of a central nerve helical path composed of a metal profile HEB 600 with two sheet metal side and concentric cross sections, arranged in continuation of the midrib. The spine is supported by six concrete piers HA-50. And she stands on a steel plate 10 mm thick. All painted in white.

Building-screen consists of 10 floors, two below ground, but functionally are 7 plants since the plants second, third and fourth place in double height mezzanine having only occupied by vertical communication cores.

At its height, plan dimensions, 54.30 x6, 30 m, and concrete walls is meant as a screen shot of the building. Is projected with unique and open floor creaked. 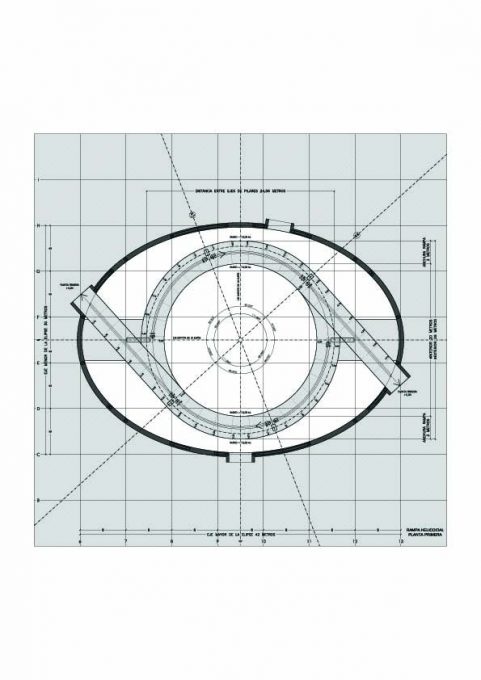 The overall plan dimensions of the layout advise expansion joints which divide the building into twelve bodies structurally independent. Eleven of these bodies under the building foundation and the building height constitutes a single structural block.

Building, Display resolve with concrete perimeter wall and floor materialized in concrete solid slabs. The solution proposed for the floors is intended to confer greater rigidity perpendicular to the building so that it can withstand horizontal forces, especially the seismic source, with deformations admissible and proper distribution of stresses in structural elements.

Rolled steel structure: 1 profile HEB 600 warped, with sheet metal sides and cross beams, each 1 meter in the direction of the radii of the propeller. On these supports a board 10 mm thick, also of steel. It rests on concrete piers 6. All painted in white.

On the structural support is made a ventilated roof, inverted, with slopes, and protection of floating floor precast concrete slab on concrete plots also.

The building’s exterior walls is solved with concrete, in continuity with the Caja Granada Headquarters. The phenolic plywood formwork is 3×1 meters with horizontal cutting to coincide with the modulation of the structure.

The elliptical wall has been solved with two sheets of half a foot of perforated brick, stuck together with plaster finish and painted white and trimmed to the outside and plaster, painted white also inland.