The America’s Cup Building, also called the Foredeck Building, is known locally as “Veles e Vents”, which is also the name of a poem that Ausiàs March invoked in the fifteenth century regarding the strength of the winds. This building faces the sea and has won LEAF Awards, European architectural prizes.

The headquarters and the park are the social center of the main competition of the racing world, established in Europe for the first time in 150 years after the Swiss team Alinghi beat Team New Zealand in 2003 and was selected as host Valencia.

The Veles e Vents building is centerpiece in the reorganization of the industrial port of Valencia, was established as the basis for all the teams in the Copa America and their husbands, as well as a place for the public to see the Cup competitions.

A build four plants that seem to underpin the air. Four floors of the size of half a football field, in reinforced concrete postesado, with large overhangs, are the key to building Foredeck.
An overlay of open platforms as a deep terraces, of different sizes and connected by a system of external staircases very attractive
Each plant has its size, flight and different ways, which hampered the work of cimbrado especially since in some areas of the building came into cimbra the ground floor and came to the deck, saving more than 25 meters in height. Other times, each of the plants are not supported directly on the bottom.

This building, which was built in a record time of eleven months, along with 800 parking spaces and Ac Park project are invited to the center of the Americ’s Cup in Valencia, Spain. 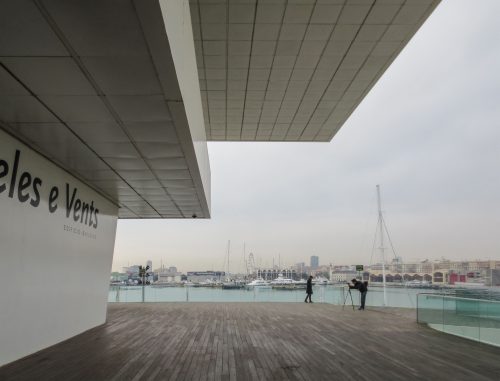 Has been built next to the popular beach of the Malva-ros at one end of the new dock at the port of Valencia, Spain.

They are accessed from a road fixed for both cars and pedestrians as the basin interior communicates with the open sea through a channel.

Since Foredeck can follow the races of the Formula 1 of sailing and watch the boats pass by the new channel of the port. Its upper two floors are used exclusively for participants in the event and its sponsors.

The ground floor is open and will have installed terraces, restaurants and cafes, creating a new entertainment area.

The building Foredeck presented as a unique combination of structural lattice necessarily complex, having to save vain lights around the cantilever of up to 30m and 14m high to bear burdens inherent to the public.

The building has four floors, designed as large flat “floating” which rely on four cores communications vertical, two of whom also are doubly inclined outwards from the bottom, both in the direction of one’s own flat on the cross. 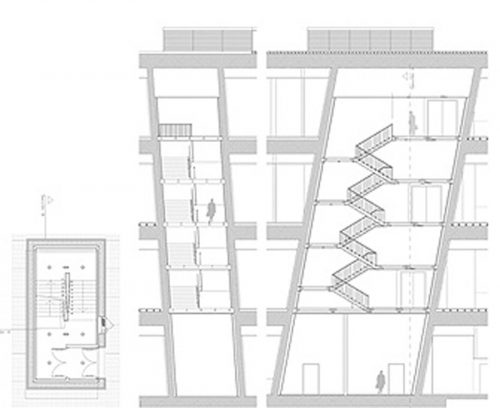 The floors are made of slabs aligeradas inwardly through blocks of extruded polyethylene, defining a few sheets of a higher compression and lower 10cm thick, and a network of nerves of 1,00 m x 2,30 m, in turn, with a width of 20cm. Moreover, within the slab are formalized some solid understandable as flat beams, which rise to the rectangle surround each pair of adjacent cores, and extends outward, reaching the limits of the plate. 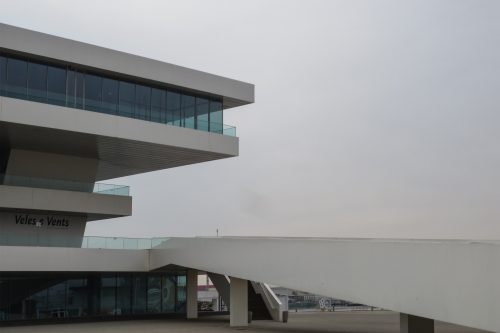 In the past three plants has been used a structure postesada, grouped mostly by large tendons of steel, whereas in the first by virtually devoid of overhangs and smaller dimensions have been able to resolve with reinforced concrete.

The basic geometry is made from 4 Decal forged in height, and having a size ranging from 52mx32m, in the case of the second floor and third floor of the 68mx43m. Each of these is based on 4 cores of concrete that house the communications vertical. 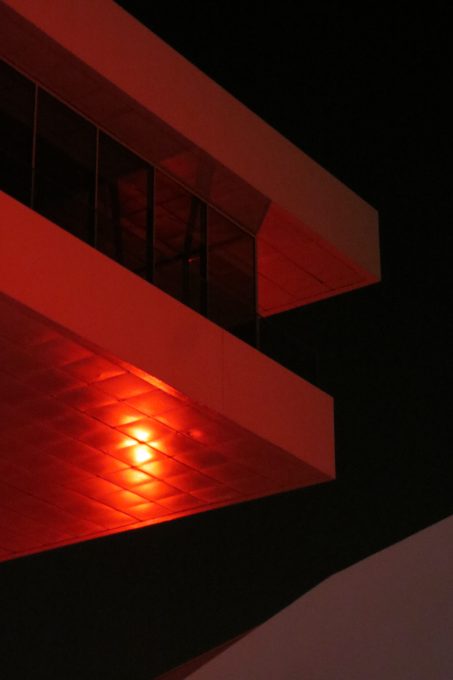 The simple formal design of the building resulting in the emergence of some overhangs perimeter of varying size depending on the placement of the plant in respect of the nuclei. They reach a maximum flight of 12.80m in the first floor, leaving significantly reduced in the second floor. In parallel, the central area between supports saving lamps from 23 to 28mts.

The platforms, to be released on pillars, are suspended, apparently in a vacuum, but in fact are supported on four structural supports. The facades, for their part, are dematerialized flat glass in large-platform, thanks to the sun protection they give large overhangs

During the implementation process is carried out a survey of levels of the plants.

The dimensioned raised by the architectural project greatly affect the structural type to use.

It has placed special emphasis on the proper modeling of facing since the openings in their condition significantly its level of stresses. Is the intense reinforcement in the corners of them, especially those of vertices coincident with overhang.

As an exceptional case, and located on the board of structural separation with the building’s parking lot, a line of pillars that support that area of the perimeter of the first floor and go up the foundation to level parking.

Given the characteristics of the ground, as well as the magnitude of the loads transmitted to it, the only feasible type is the deep foundation. 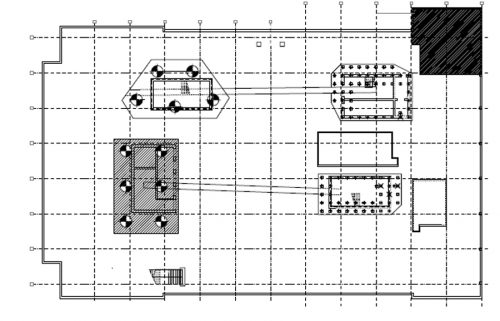 The ground is in his first 10m of rubble, making it difficult work of implementation. At first it was chosen by a steering hincado, with piles of prefabricated 40x40cm type “TERRA”, which requires removing the entire layer of previously rubble that must pass through these elements.
From the checks carried out on site has become obvious that this solution is only possible in the case of two of the four encepados to build. For the remaining two, the foundation has been solved by piling excavated sludge with bentonite, large diameter (2m).

The proximity to the sea conditions the non-execution of basements, as well as the choice of the type of concrete used in encepados, since it will be partially submerged in sea water. 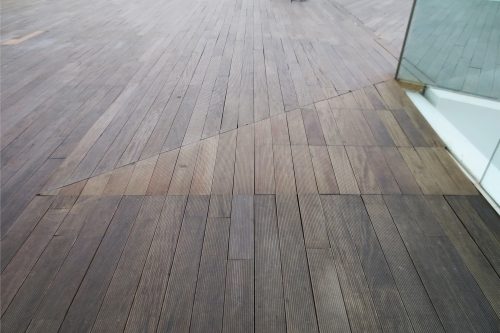 The materials used are not very numerous, given the minimalist design of the same

We used three types of pavement: a prefabricated terrazzo, used in the indoor and outdoor parking. A continuous pavement resin and polyurethane in all the interior of the building, including kernels and wet wood garapia floating terraces 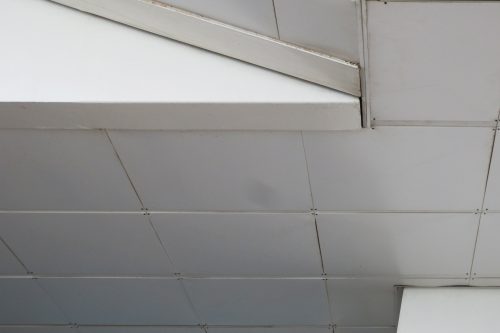 It has opted for structural materials that do not break with the design. The exterior is micro perforated aluminum and steel interior.

Curtain walls of steel and glass. White incessantly the forged steel fences and glass reflecting the sea. The steel cladding has needed a primer for special protection to protect it from exposure to the marine environment and that in turn gives it its white color.