The Amager Treatment Plant (ARC), also called Copen Hill or Amager Bakke, is a building designed by the BIG Architects. It was completed in 2017, although some of its functions were not completed until 2019. The study won the competition that ARC launched in 2010 to create a 90000m2 center in which not only a waste-to-energy conversion plant is created but also a publicly accessible plant. This plant could have been the typical garden terrace, however, BIG took the factory-public relationship to another level, a place where the public wanted to return.

The ARC replaces a waste treatment plant that had occupied the site for 50 years. The new plant is conceived as a public infrastructure with social intentions, and integrates the latest technologies in waste treatment and energy production.

To avoid pollution in cities as a result of waste disposal, in some cases comparable to that of the same waste, the new ARC plant only works with eco-compatible waste and its chimney emits water vapor instead of harmful fumes for health. The recycling plant fully responds to the “green philosophy” recently promoted by the Danish capital.

The ARC is located in the Amager district, Copenhagen, capital of Denmark. The place where the project was built is a space of abandoned factories that has recently benefited from the conversion of many of these in sports facilities, such as Copenhagen Cable Park, a water park where water skiing is practiced, a go track -kart, a wall to climb and, with the creation of the ARC, a new ski slope that can be used all year.

All these activities, which attract a large number of audiences, were an issue to be taken into account by architects when designing a waste treatment and energy generation plant, as it should not interfere with the activities that take place there. , both physically and aesthetically.

The concept that the study wants to generate with this building is that of being able to redefine the relationship between community and industrial space. This power plant is based on a logic of receiving and giving. Receive waste and give energy and activities.

This purpose can be observed, on the one hand, in the operation of furnaces, steam and turbines, which convert 440,000 tons of waste annually into sufficient clean energy to supply electricity and urban heating to 150,000 homes. And, on the other, the building benefits from the use and location of these machines inside that allow generating a green roof of about 10,000 m2 with a varied mountain-style topography. Regenerating the biodiversity of the landscape, absorbing heat, removing air particles and minimizing stormwater.

With almost 100 meters high and 41,000m2 built the power plant is one of the highest landmarks in the city and an example of landscape construction. Within it, three large spaces can be observed. The factory, the administration and the activities abroad.

The factory and the administration are established inside the building. Its location in the interior is determined, in part, by the organization in order of height of the machinery and by the occupation of ten floors for the administration, the educational center and the conference rooms of ARC. In this way, an efficient inclination of the roofs is created for activities in outer space.

The exterior of the building is a space for citizens. During the winter, ski slopes are generated for all levels and in the summer hiking and climbing paths are generated on an 85m high wall. In the lower part there are the elevators or “carpet lifts” used by visitors and an apres-ski bar of 600 m2 that welcomes them when they reach the “top”.

In the construction of the structure you can see 3 sections, depending on the materials used for its construction: the base made of concrete, the upper steel structure and the aluminum facade.

The base is supported on 2,400 reinforced concrete piles introduced into the ground. On it, 5,000 tons of steel are supported corresponding to the upper structure and both are covered by 35,000 m3 of concrete. On the other hand, the facade has two layers, a 10m x 2.5m base and another outer layer of aluminum bricks that serve as a visual element. The interior of the panels is shatterproof and includes front sheets of fiber reinforced polymer (FRP), which can be customized to withstand some impact. These can be between 1.2m and 1.5m wide and any length up to 3.25m.

As for the construction of the building itself, prefabricated elements were used. At first, the option of welding ‘in situ’ was considered but, due to weather conditions, it was not possible. Eight mast climbers were used, working sequentially. First, in a strip of 12m from the ground level to fix the supports. Then, the 10m sections were joined by the following in-line climber. And finally, the bricks joined from inside the structure, starting from the top of the building, from the four corners, and from both heights at the same time. The panels are designed to free themselves from the mounting system, therefore, the mast sections allowed their disassembly.

The primary materials in this project are concrete, steel and aluminum. But, glass and artificial plants are also exposed.

Concrete and steel are presented, more than anything, in the foundation and structure. While, aluminum wraps the outside in a grid of stacked pots with glazing between them. In this way, a green masonry wall of large size and porosity is created that gives the interiors natural light and gives the elevations a patterned appearance.

For pots, plants that resist the heat released by the building and snow in winter were thought of. While, for the upper cover, artificial grass was used with a similar hue to that of the turf that is appropriate for skiers in summer, allowing them to slide while waiting for the snow season. 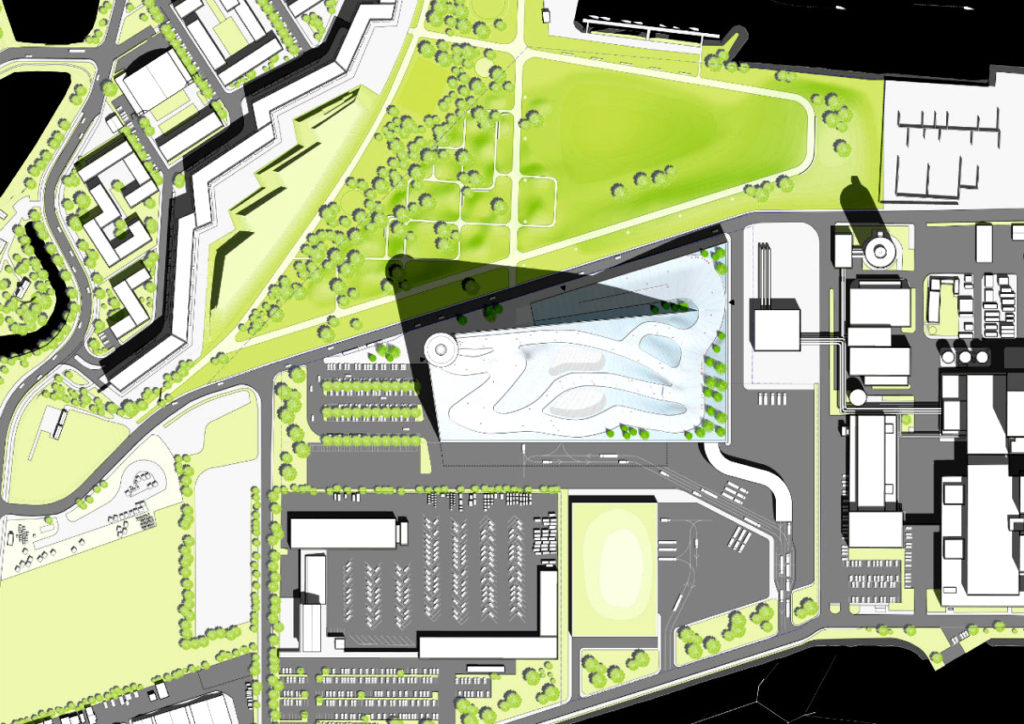 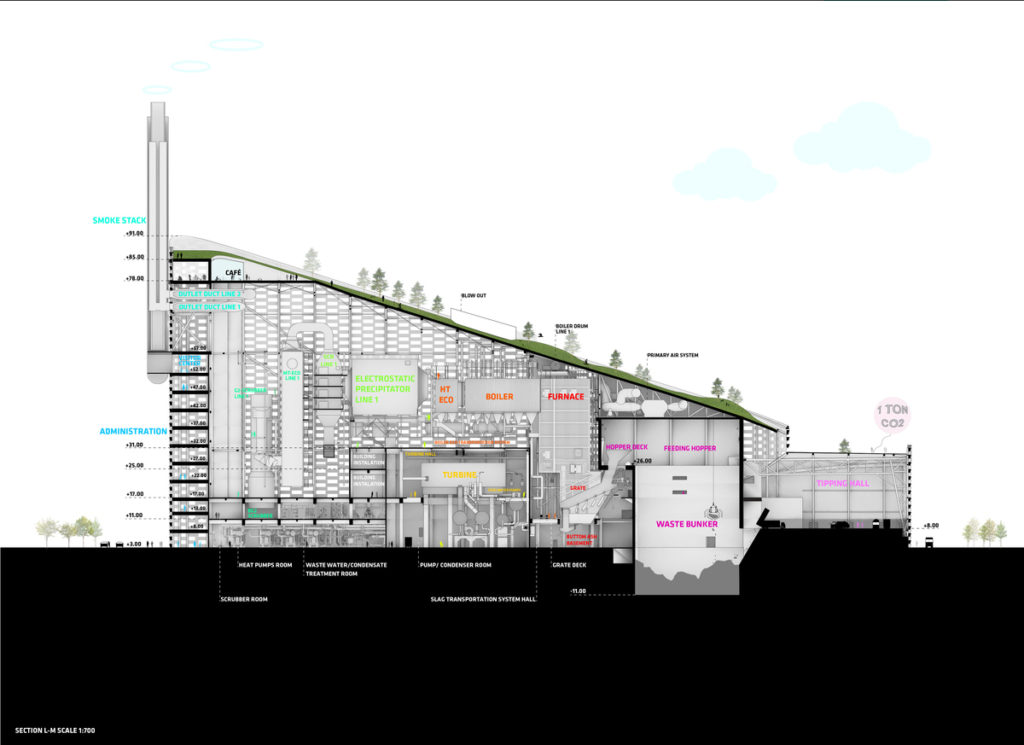 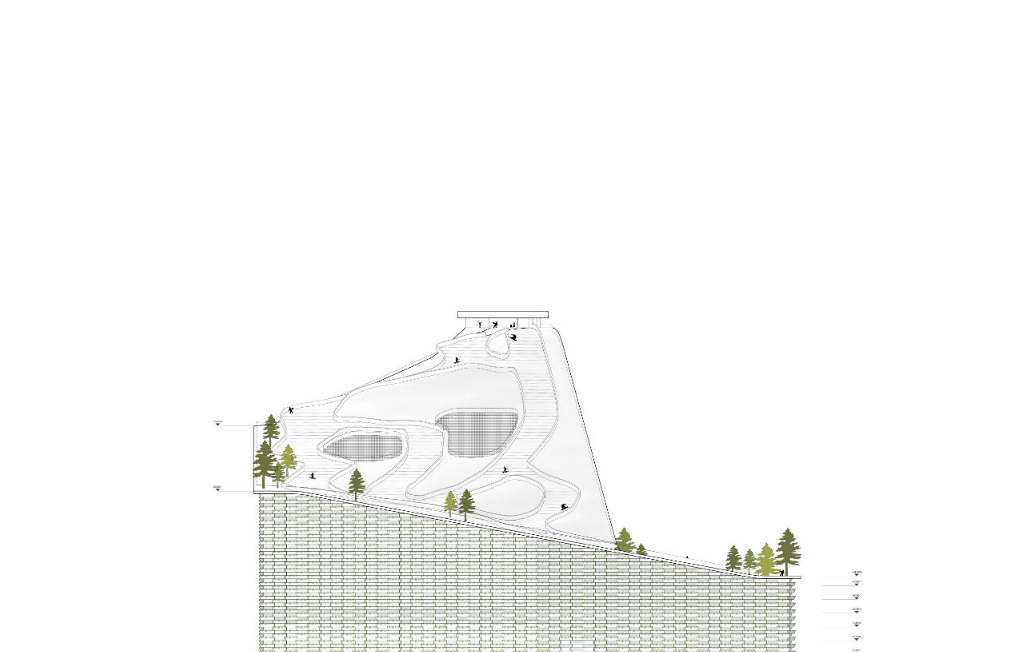 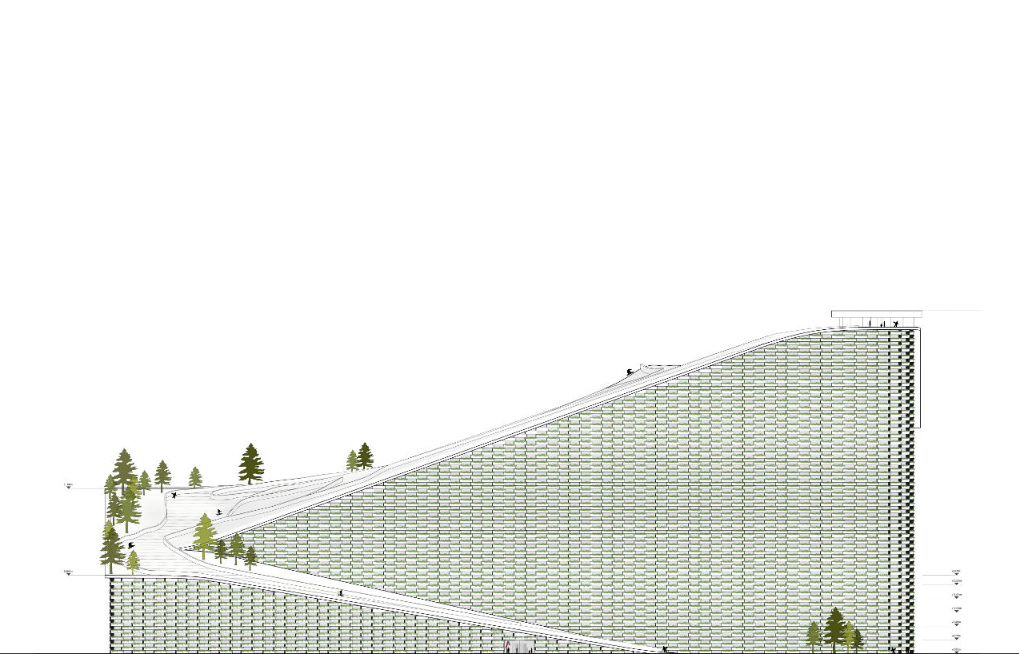 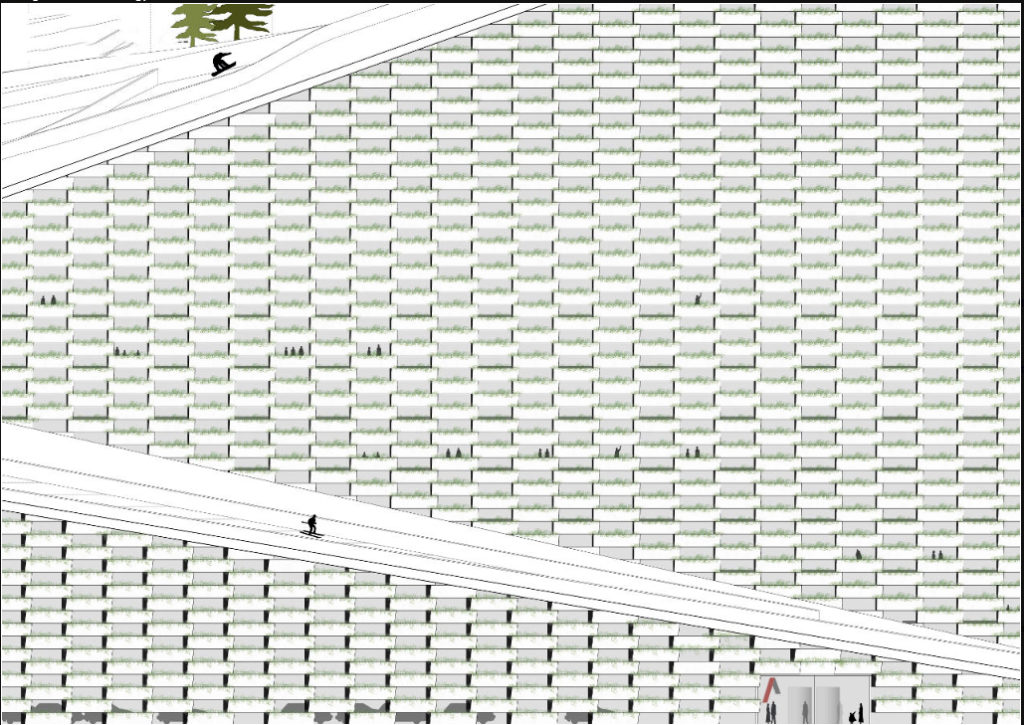 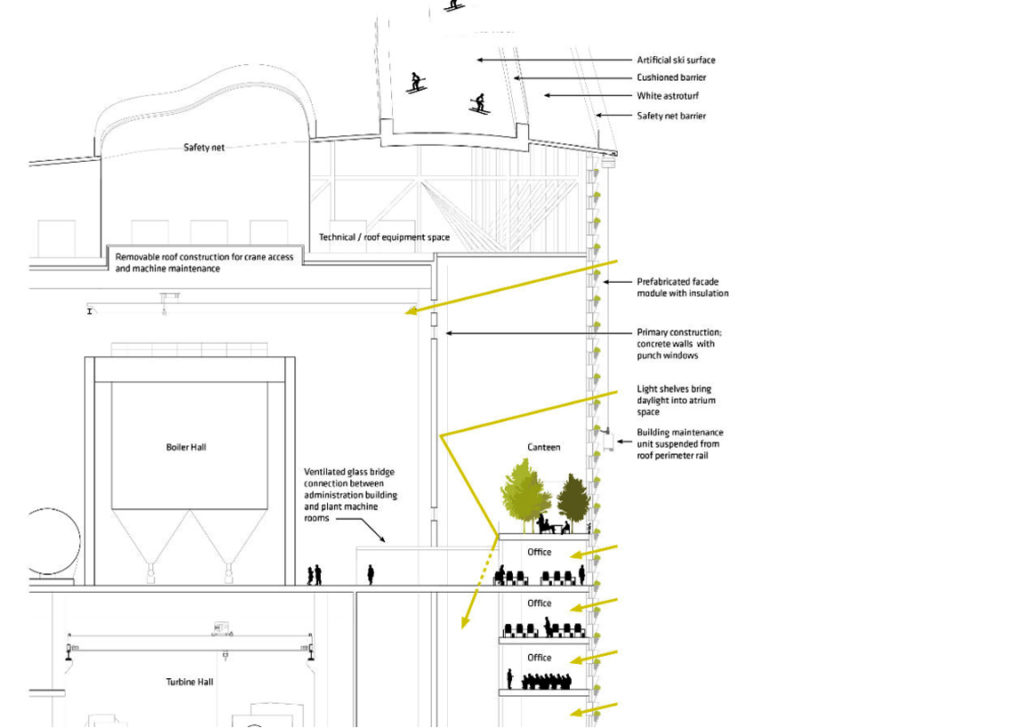 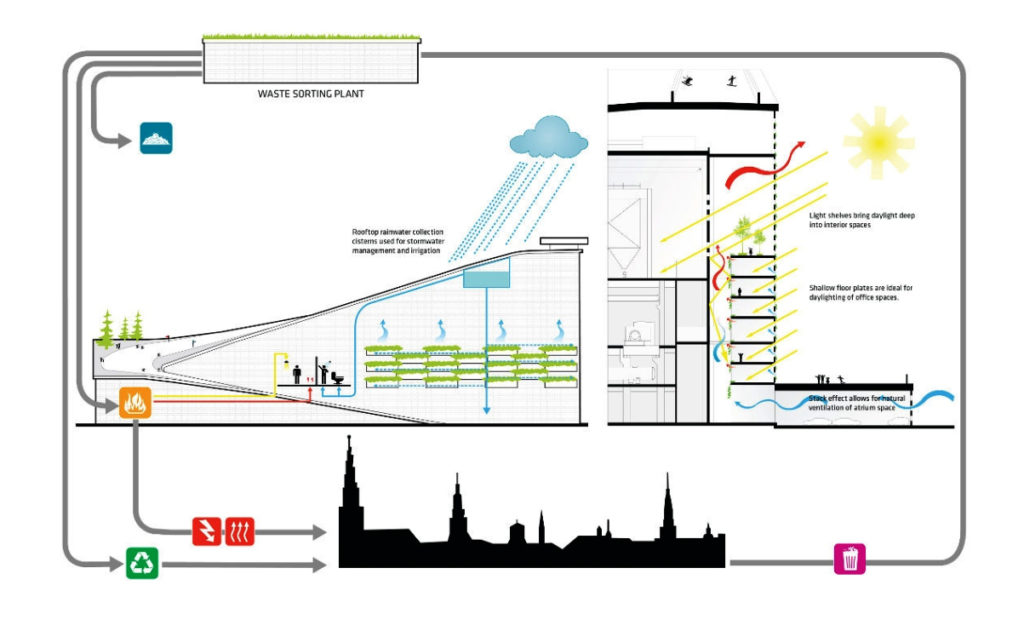 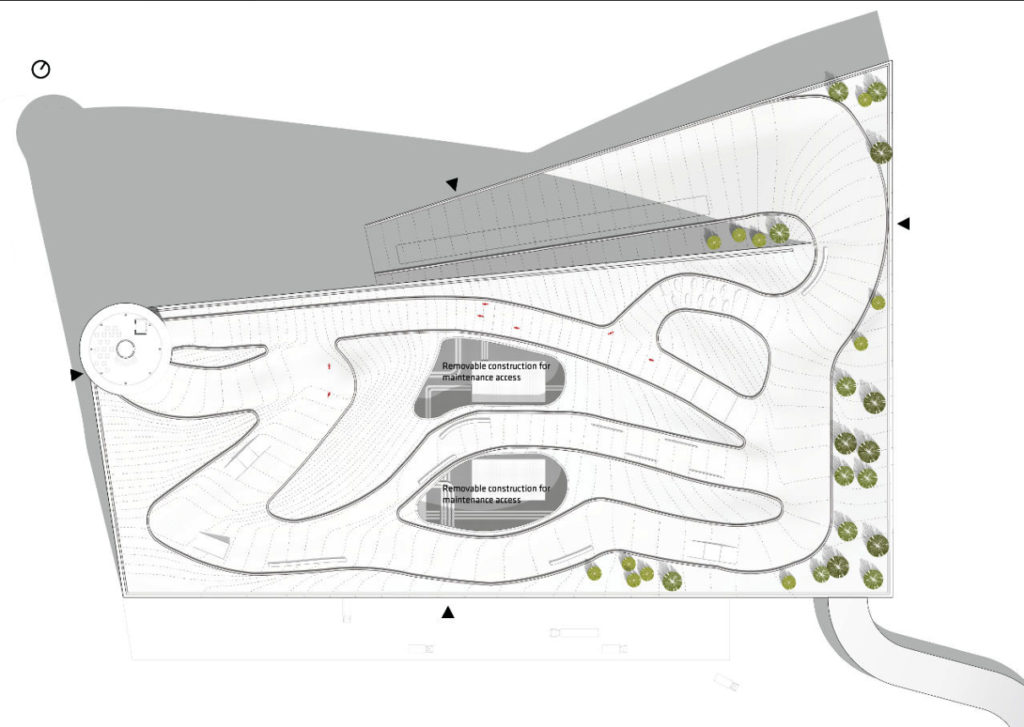 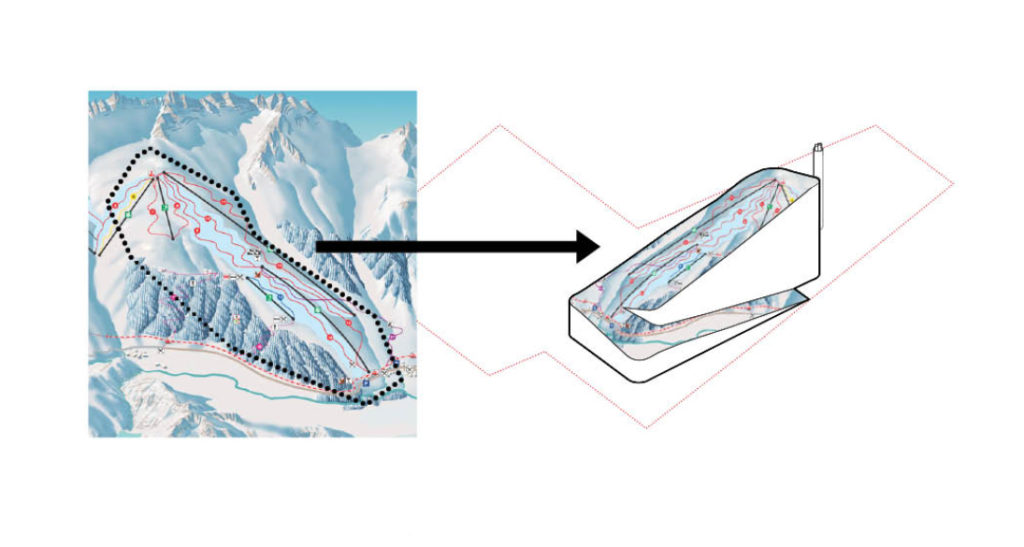 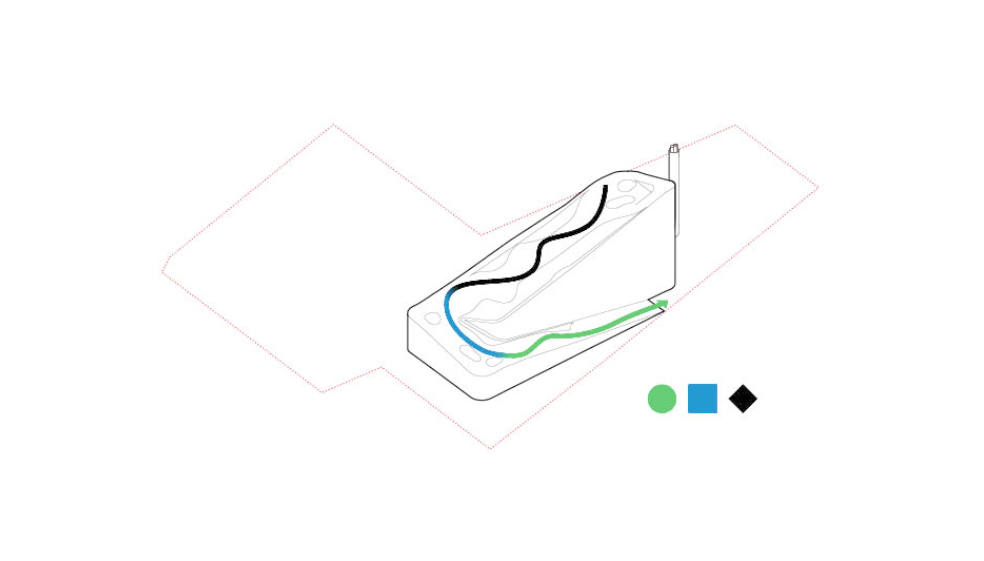 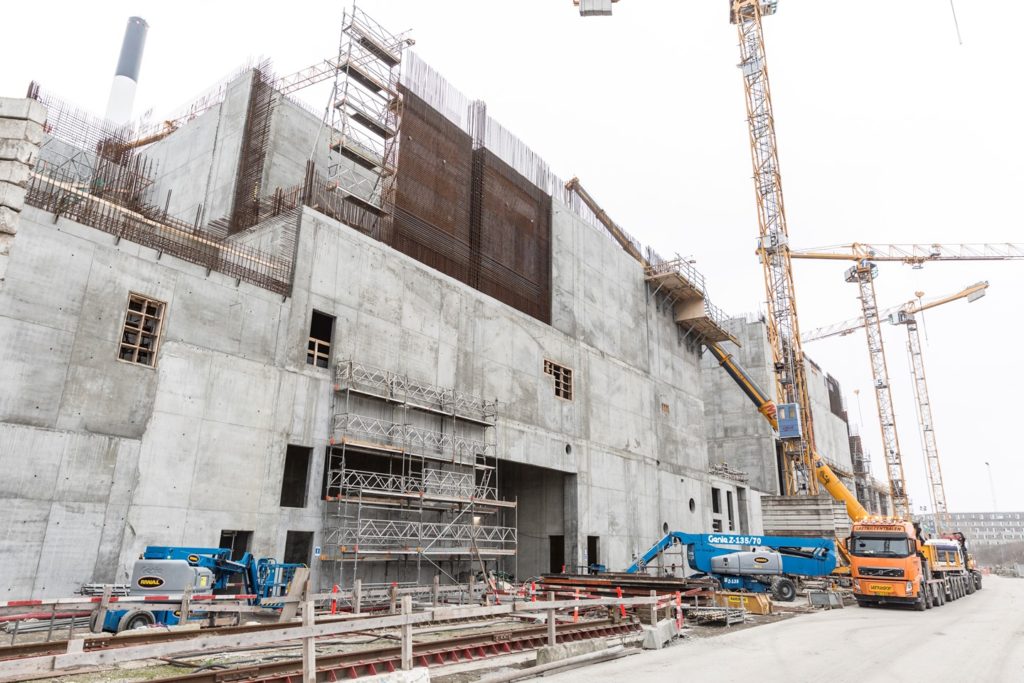 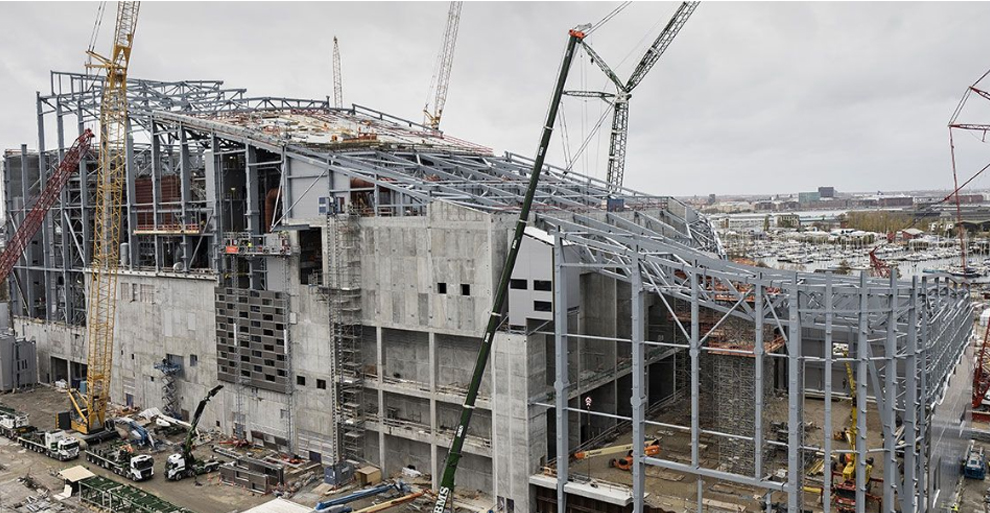 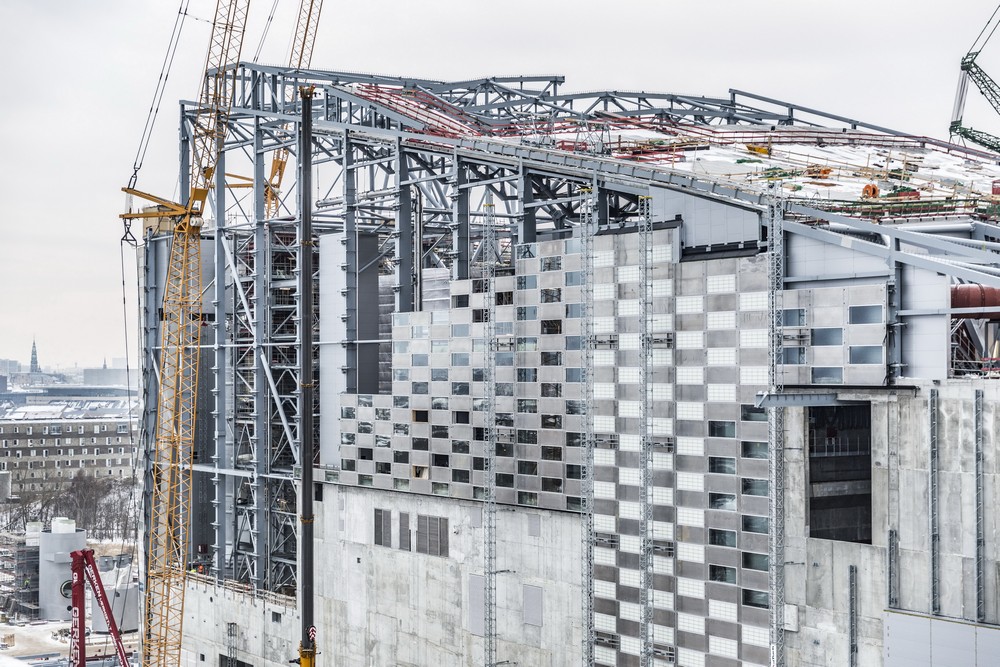 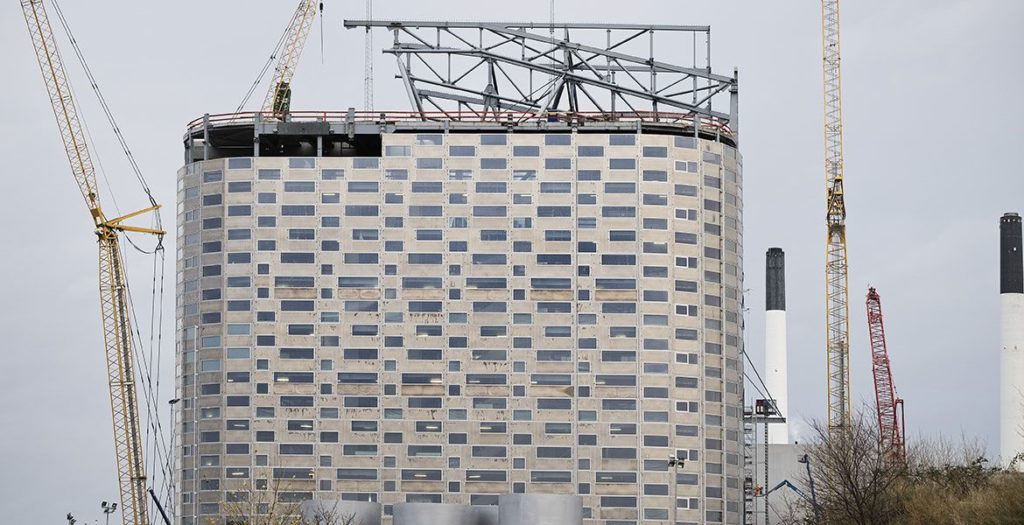 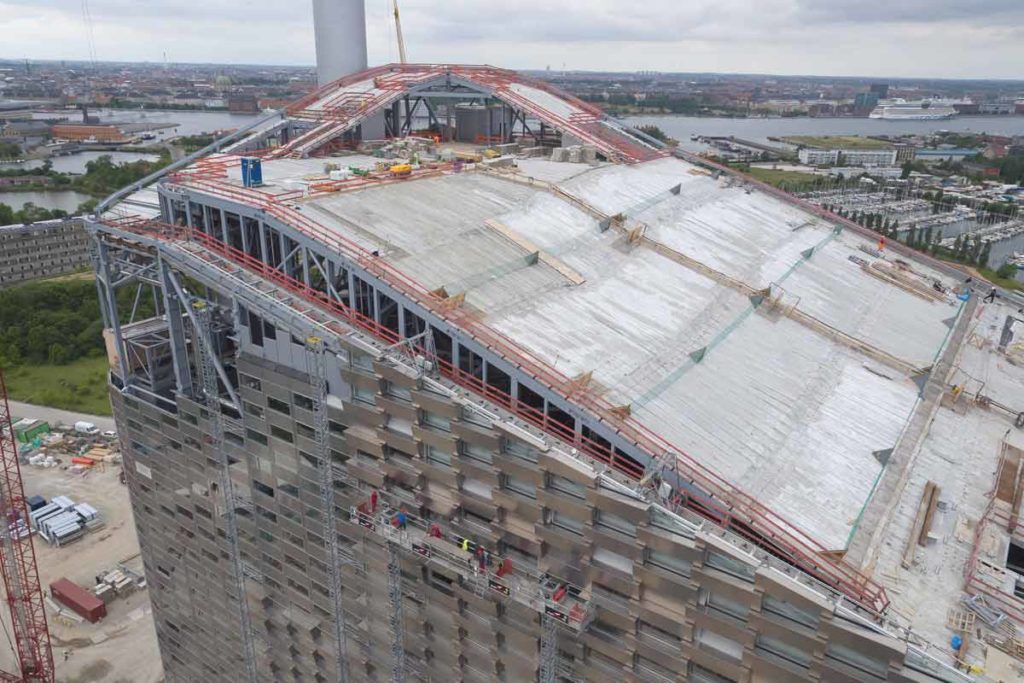 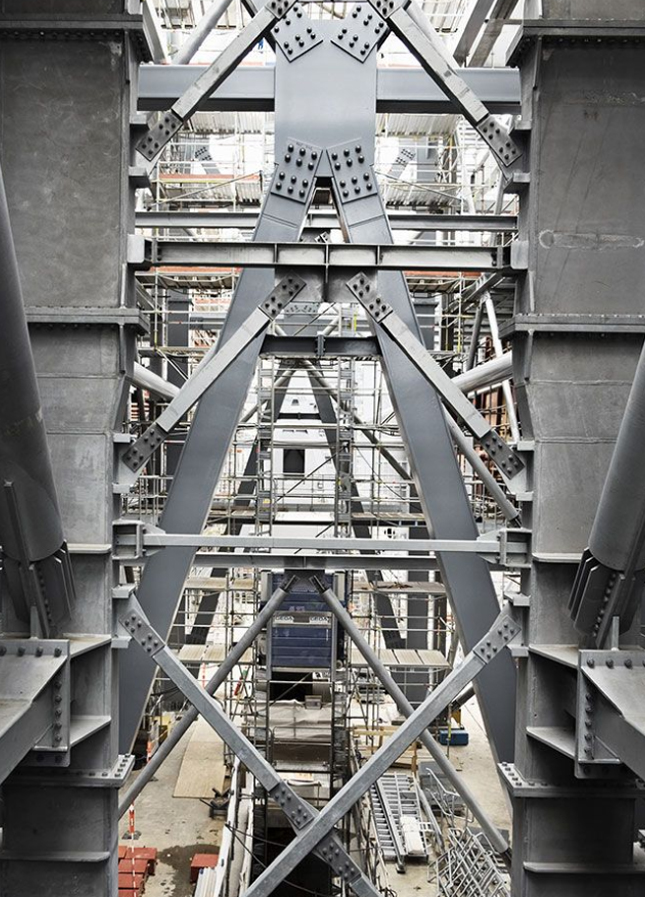 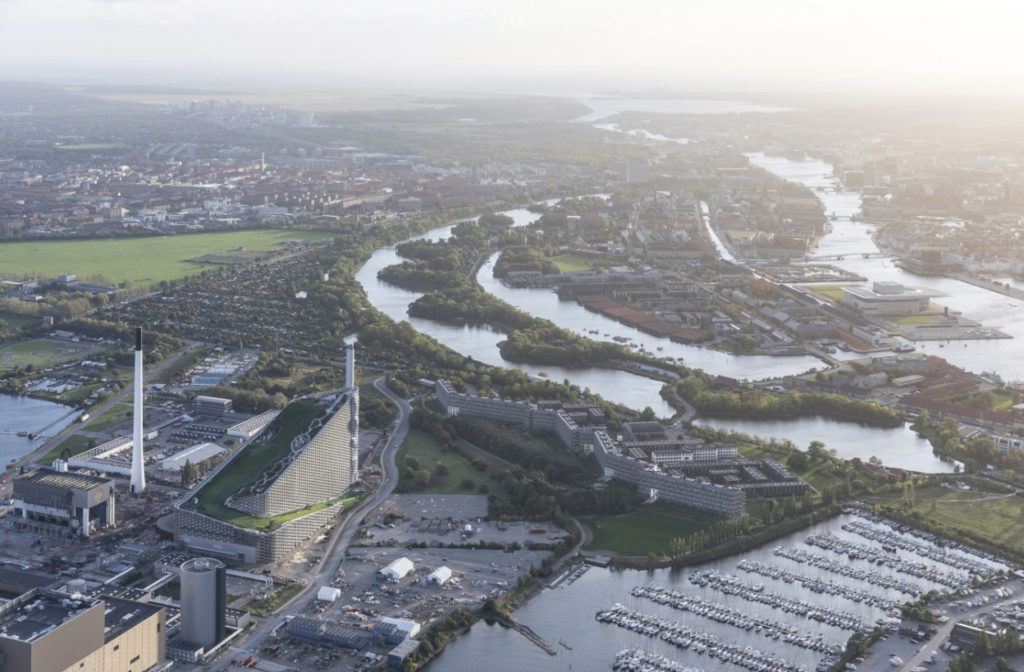 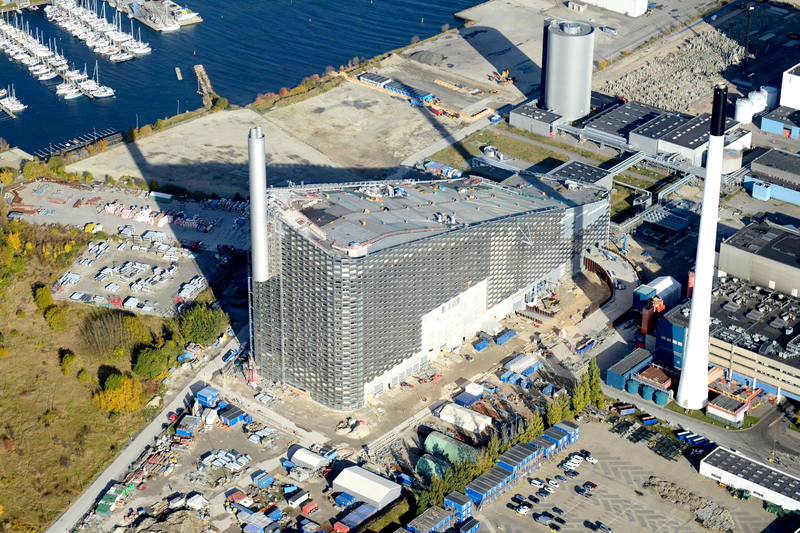 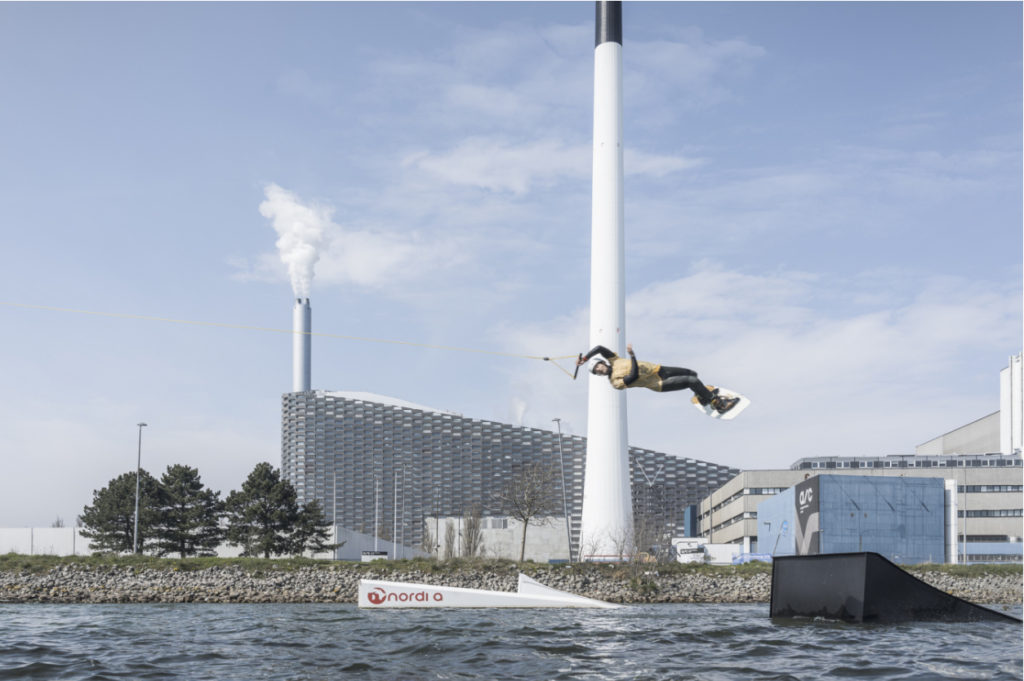 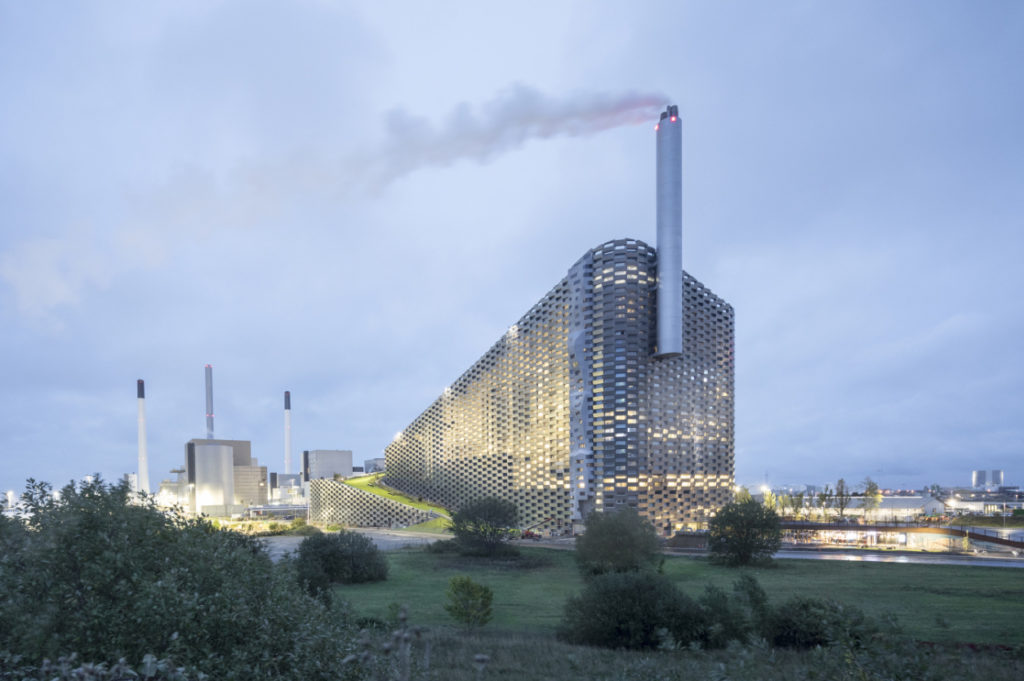 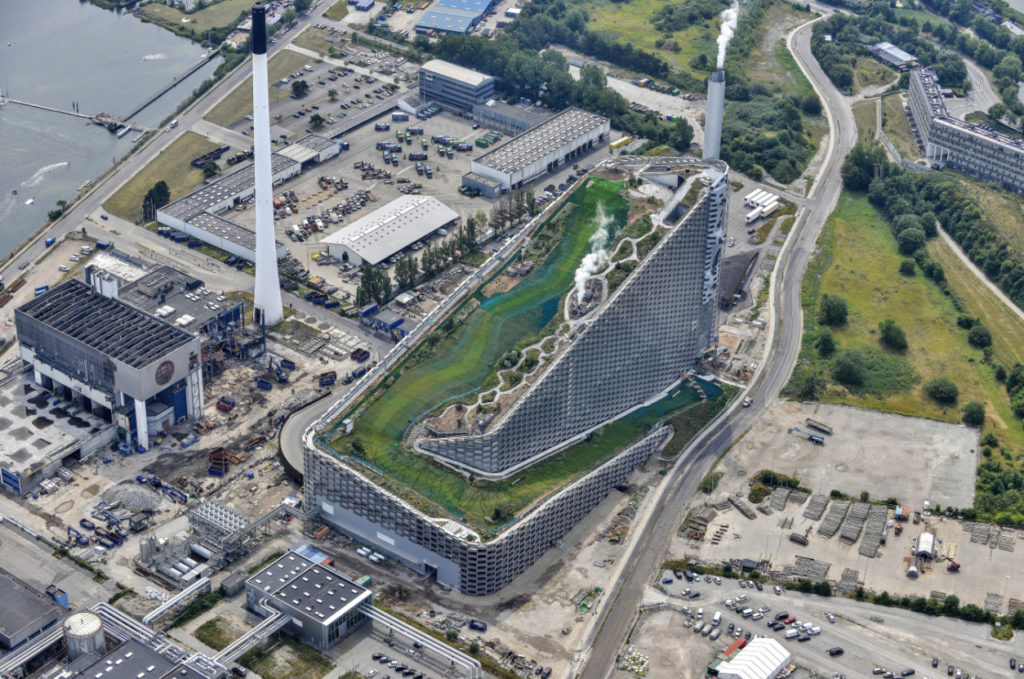 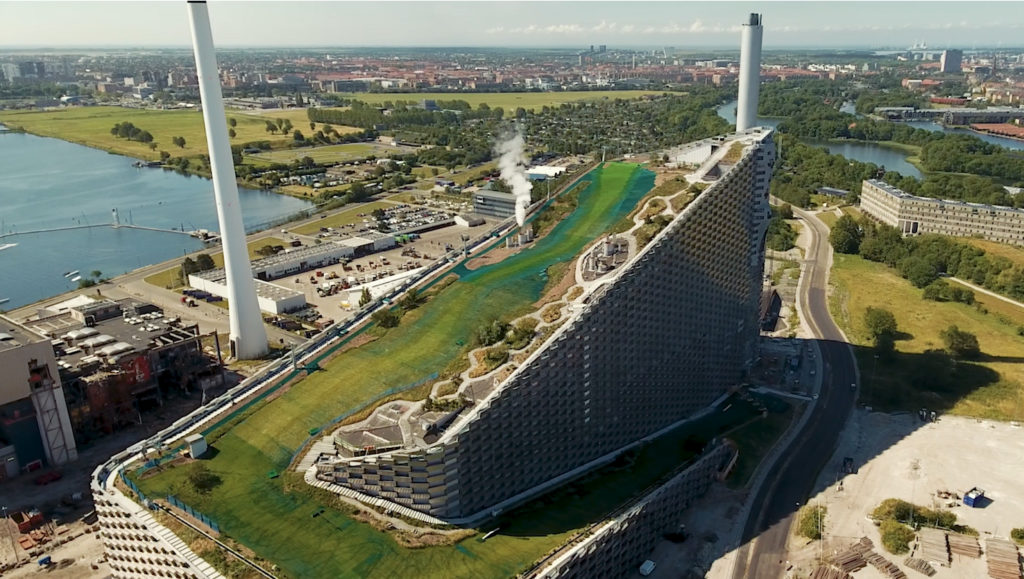 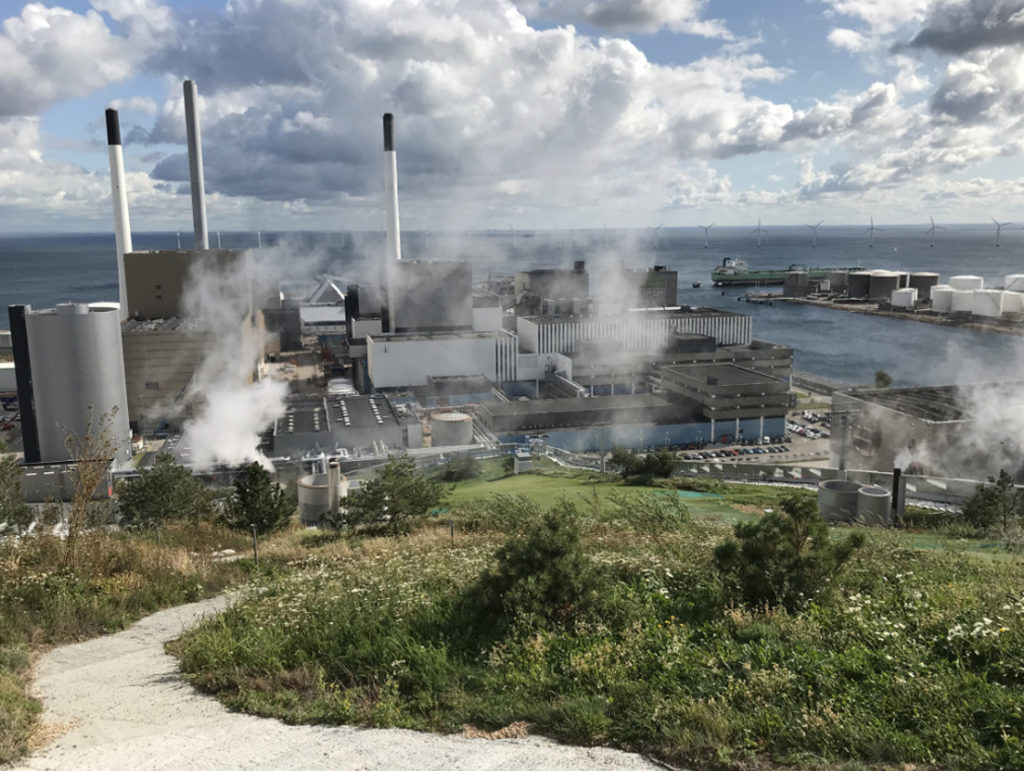 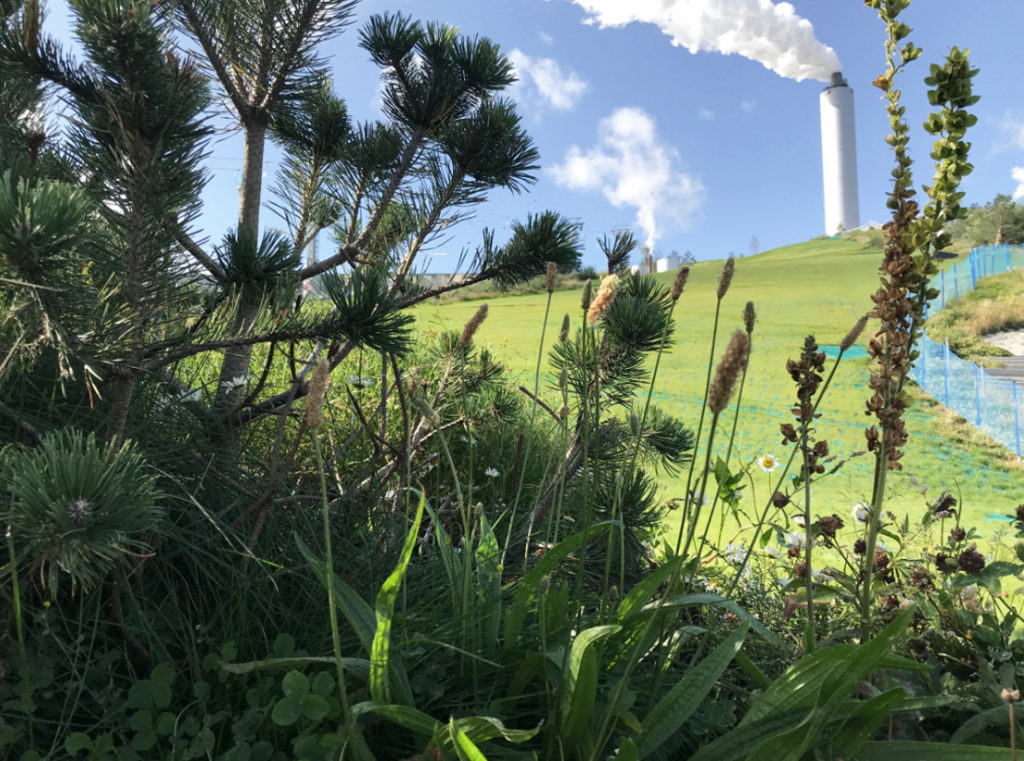 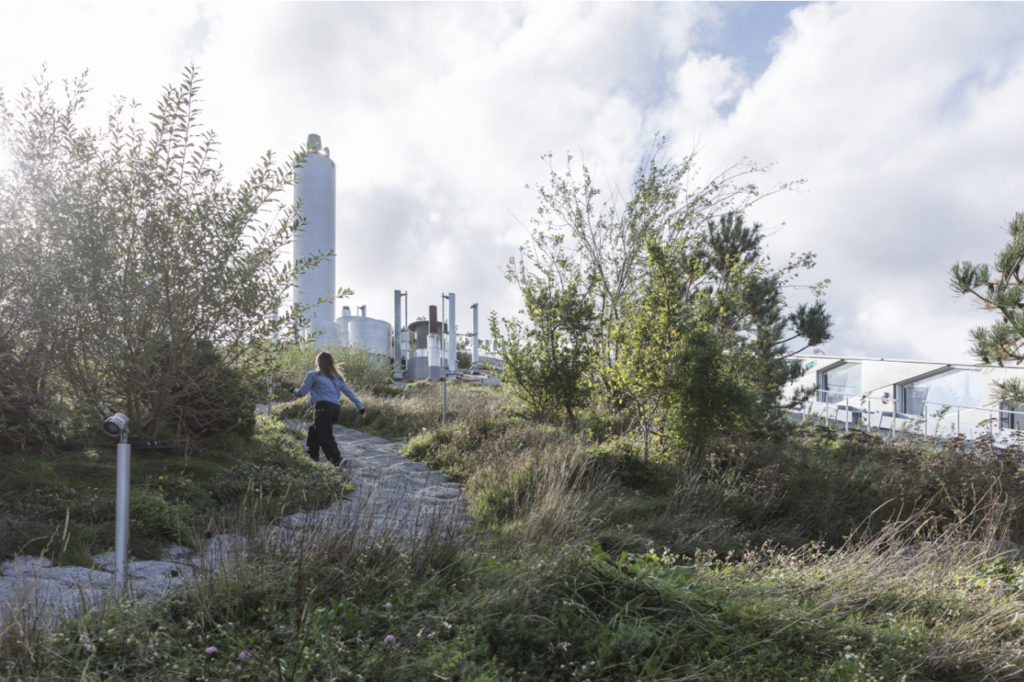 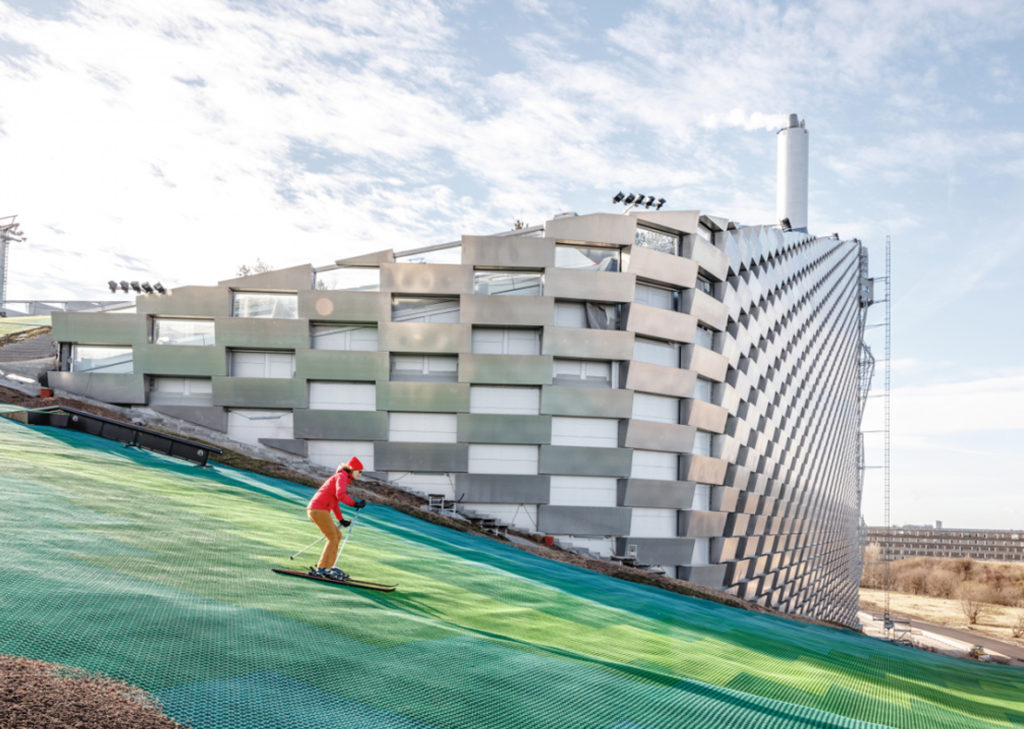 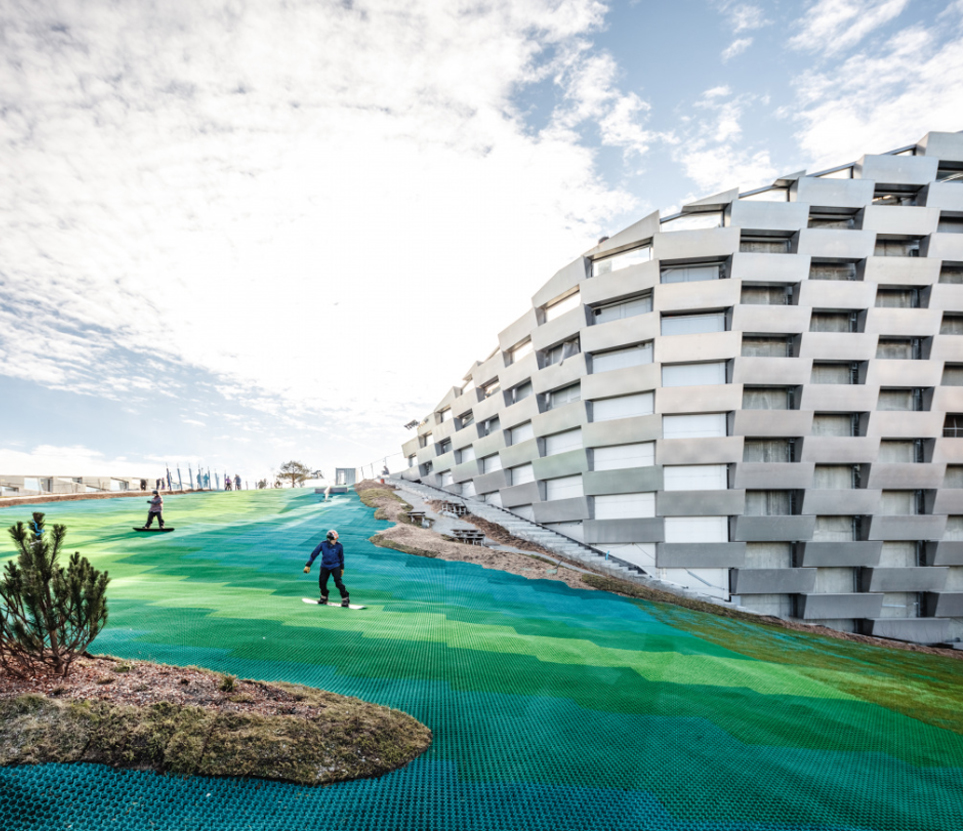 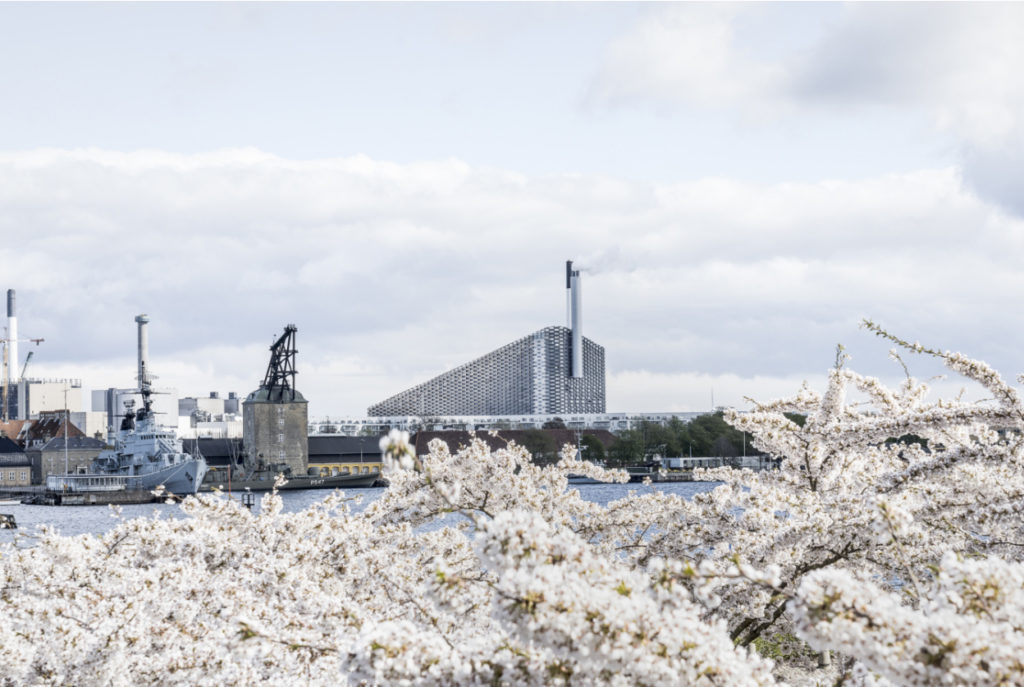 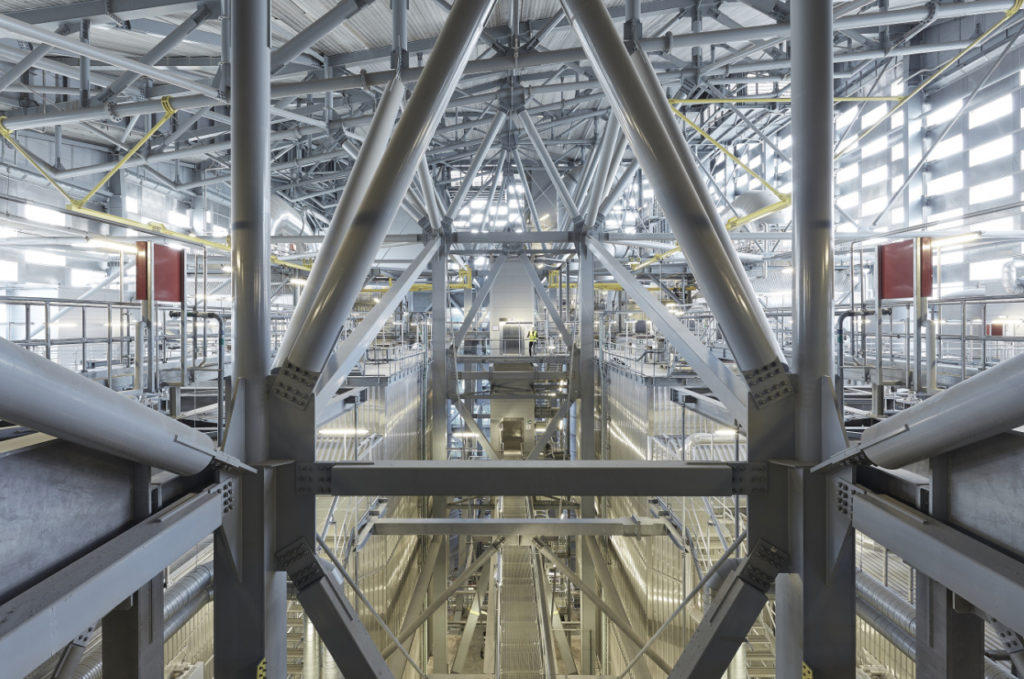 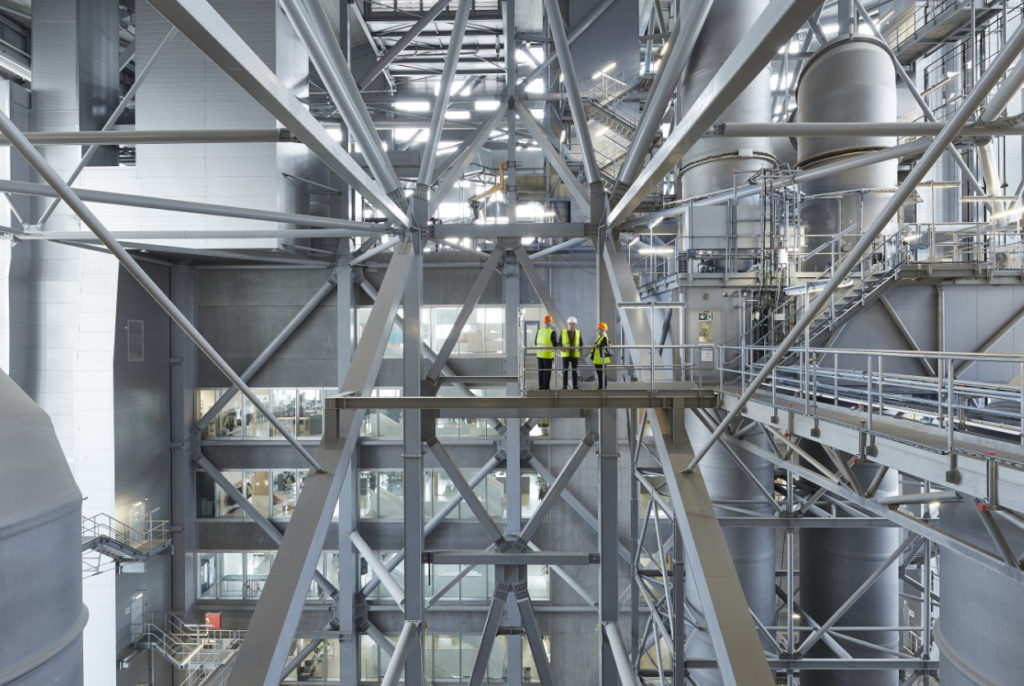