In November 2001, the Dutch Minister of Economy opened the Aluminium Centrum, headquarters building for the aluminum industry in the country. One of its main functions is to show the world the different products and qualities of national aluminum.
The design of Micha de Haas Architects, winner of the contest in which 64 architects, the building located about 368 aluminum columns to emphasize the lightness and strength of the material. For this project, the architect was awarded the Dedalo-Minosse International Prize 2003-2004. The design also won the European Prize for Architecture and Technology.

The “Aluminium Forest” was built in Voorveste 2 Houten, Utrecht, Netherlands. It relies partly on a slope and partly on an artificial lake, and from some angles it seems that is about to paddle to enter the water. 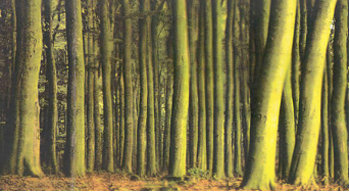 The inspiration for the design, Micha de Haas includes the lowlands of Dutch landscapes, particularly the characteristic groves of poplars planted in a square arrangement with its cups that are fused into a single mass of foliage above trunks.

The architect named the project “aluminum forest”, whose light cups rise six meters above the ground to form the office building, like a piece of aluminum smelter in which the windows are placed irregularly, as deep incisions.
The building is clad with aluminum color, symbolizing both the strength of the material as a high-tech industrial product environmentally conscious.

The first project consisted of a matchbox supported on legs.

This is an urban design of commercial building with extraordinary architecture and innovative technology that give the building a unique character.

The volume is based on a “forest of columns” with internal leakages, inside the main volume, making that often appear larger of which is actually built surface. In this regard, one of the main requirements is met: visual prominence. The effect is doubled by the reflection of building in water, creating a bright reflection on the bottom where the silhouette of the building and anodized aluminum column with an almost magical blend mode.

Inside, in silence, the glass elevator rises six meters in the air, from ground level to the aluminum case raised, while the large yards receiving sunlit air, light and heat. Out whispers of wind and games of smooth columns with water.

The concrete and steel building has an aluminum frame which rests on 368 narrow columns, aluminum also the rise 6.10 meters above the ground, being suspended over an artificial lake.

The variation in the spacing between columns and angle of placement of each set makes an amphibious creature remember large, at water’s edge. The close proximity of the columns allows the challenge building expectations and versatility aluminum hardness, showing innovative features, due in part to results in the use of space technology. 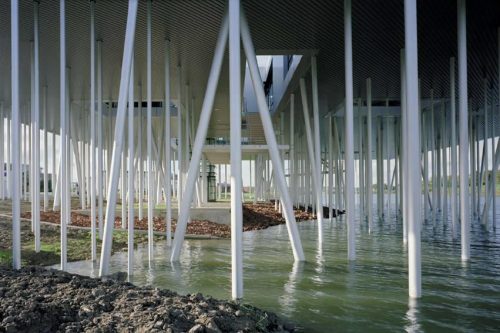 Aluminum columns with diameters ranging from 60 mm to 210 mm and a length of 6 m there are tree trunks in the architectural design and construction of a 31.2 × 36 m with a height of 5 m is considered that is at the top thereof.
The architectural concept of the building is quite unusual stability had to be provided by the columns as such, without additional bracing, which were not allowed by the architect.

A study was conducted to investigate the resistance, stability and deformation, using various models of the structure, to decide the load bearing system for the final design. It was analyzed the first structure designed by architect and later the appropriate changes were made in the structural system, which ultimately resulted achieving a stable structural system.

This is mainly achieved by:

-a Rigid connection of columns with larger diameter, 210mm in both the top and the bottom.

I Slight slope (1:10) of these thicker columns, bracing simulated system without destroying the concept of the “aluminum forest”

-concentration Of the larger columns into three groups, so that the horizontal and rotational stability is adequate.

The floor is constructed of main floor at a distance of 2400mm including beams. To include support columns that are not in this frame beams, secondary beams frame major below was added. Where the amplitude is too large, two aluminum beams placed one above the other, connected by screws, which results in an assembled beam.

Finally was considered the concept of fire safety, as agreed with the authorities.

The building was designed under the principles of industrial, flexible and demountable construction, taking into account sustainability and energy saving. Several technical innovations have been specially designed for this project, for example, a method of laminated construction and aluminum facade columns containing multiple integrated functions. 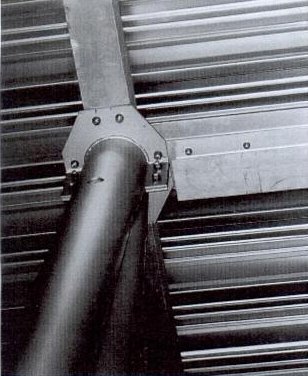 Aluminium is a material that is characterized by combining lightness of weight, strength, color, is moldable and durable.
In the original architectural design of the office building was thought aluminum panels 600mm wide with a willingness to flat surface, straightness and stiffness. Subsequently these measures were optimized to 1150mm wide, being this way the panels lower number required, reducing production costs, while improving the appearance of the building to give a more rugged look.

Alcan Nederland worked with the architect from the beginning of the project. Its engineers proposed the use in the facade panels ALUCOBOND suspended bolted aluminum profiles U, also aluminum. Following his experience in detailed engineering profiles for aluminum substructure were created.

Section aluminum beams is similar to steel beams HE160.

To cover the window sills special touches were applied. The drains run through the aluminum profiles that support. For the jambs of the windows with 225mm depth 25mm wide panels were applied.