On October 21, 2001 a municipal referendum was held in Bavaria, where 65.8% of voters (37.5% of the Munich-voting which gave suffrage) chose to build a new stadium (at the cost of the refurbishment of the Olympic Stadium in Munich).

The design of the work was done by the firm of Herzog & deMeuron, which was selected in February 2002. The German insurance firm Allianz is the main shareholder of the company that built the project. The total cost of construction is € 280,000,000, paid by the TSV 1860 Munich and FC Bayern Munich.

It’s construction began on October 21, 2002, with the laying of the stone foundation on the part of Franz Beckenbauer, and was completed in April 2005. It was inaugurated on May 30, 2005.

Its teams are the holders FC Bayern Munich and TSV 1860 Munich, teams that previously played for locals at the Olympic Stadium in Munich.

Allianz helped finance the new stadium in exchange for putting using name during its first 30 years of life. Its name, Allianz Arena, also represents the long bond between the company and Munich. The company has been headquartered in this city for 50 years.

The name of Allianz Arena also has another meaning: symbolizing the alliance between the two football teams: FC Bayern Munich and TSV 1860 Munich, who have joined forces to create this “temple of football.”

It was one of the subsites of the World Cup 2006, held in Germany. For this event, the stadium temporarily took the name of the FIFA World Cup Stadium in Munich, for reasons stipulated in the regulations of FIFA. For similar reasons, it also bears the name of Munich Arena in the championships organized by UEFA, as the Champions League. Despite these changes, the official name is Allianz Arena.

The Allianz Arena is popularly known with the nickname Schlauchboot(English: inflatable boat).

Of the 280 million euros invested in its construction, 90 billion were invested by the insurance firm Allianz, which will keep the rights to the name of the stadium until the year 2021. The rest was shared by the two Munich clubs, while the city and the state of Bavaria were responsible for the infrastructure (roads, accesses).

The Allianz Arena is located in the neighborhood of Fröttmaning, north of Munich, in the state of Bavaria, Germany.

Swiss architects built the concept of this work, making the stadium an icon for all their projects, which was a major challenge since more than one team used it as a local field.

It is well known that supporters of soccer teams make their home stadium an icon that reflects the character and personality of the team and its fans.

How can two teams will feel identified with a single stadium?
The solution the Swiss architects Herzog & deMeuron arrived at was as effective as it was ingenious:
Light up the stadium with the colors of each team during respective games, which changes the appearance of the stadium altogether.

It has 66,901 seats in three levels, 3400 of them executives seats, 106 VIP boxes and 1,400 places next to the field. The upper tier has an inclination of 34 degrees, allowing perfect visibility from all points.

Once inside, facilities for fand and businessmen covering all areas, include a wide choice of catering, entertainment and leisure, Halls of Fame, childcare services and kindergarten, big shops for fans, offices and conference rooms to name a few. Not least of which, 6,500 square meters are intended for restaurants and bars.

The external architecture of Allianz Arena is made up of 2,874 diamond metal panels of ETFE (ethylene-tetrafluoroethylene copolymer) at a pressure of 35 hPa. Each panel can be illuminated in white, red or blue. The intention is to illuminate the panels to match with the colors of the respective local team, or white when the local German team plays. 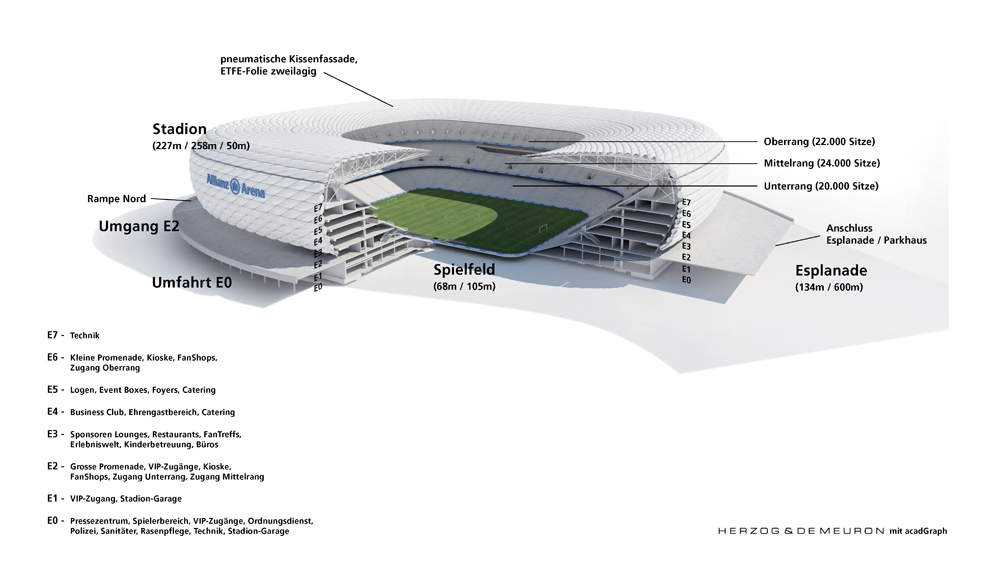 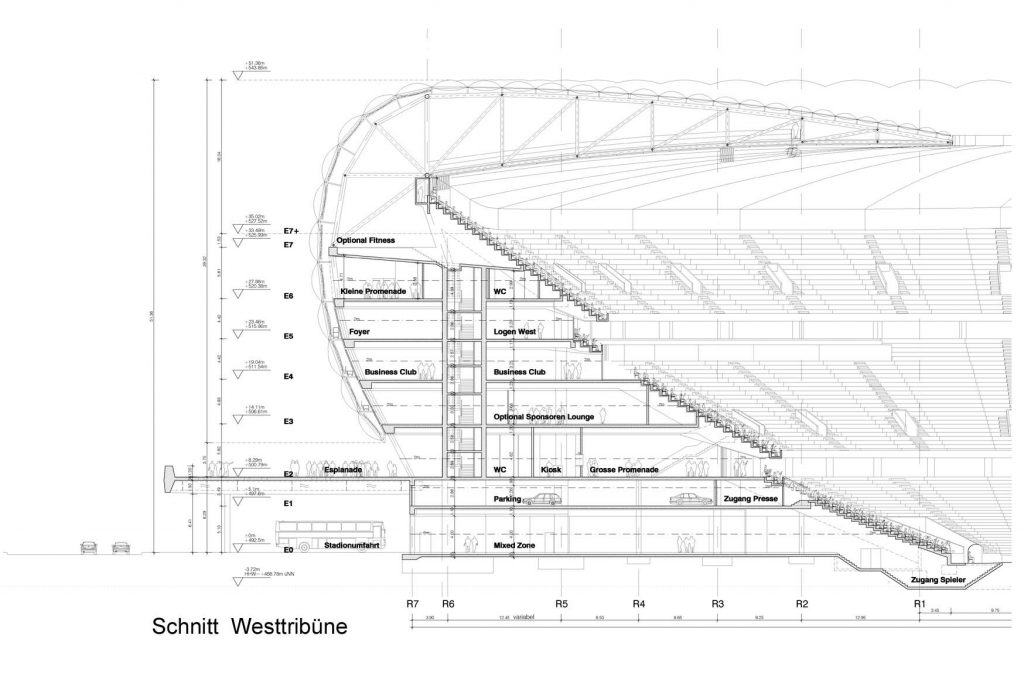 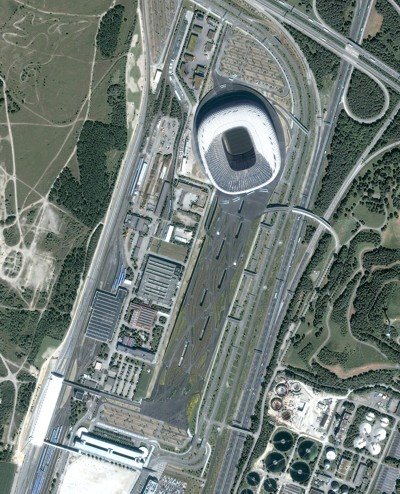 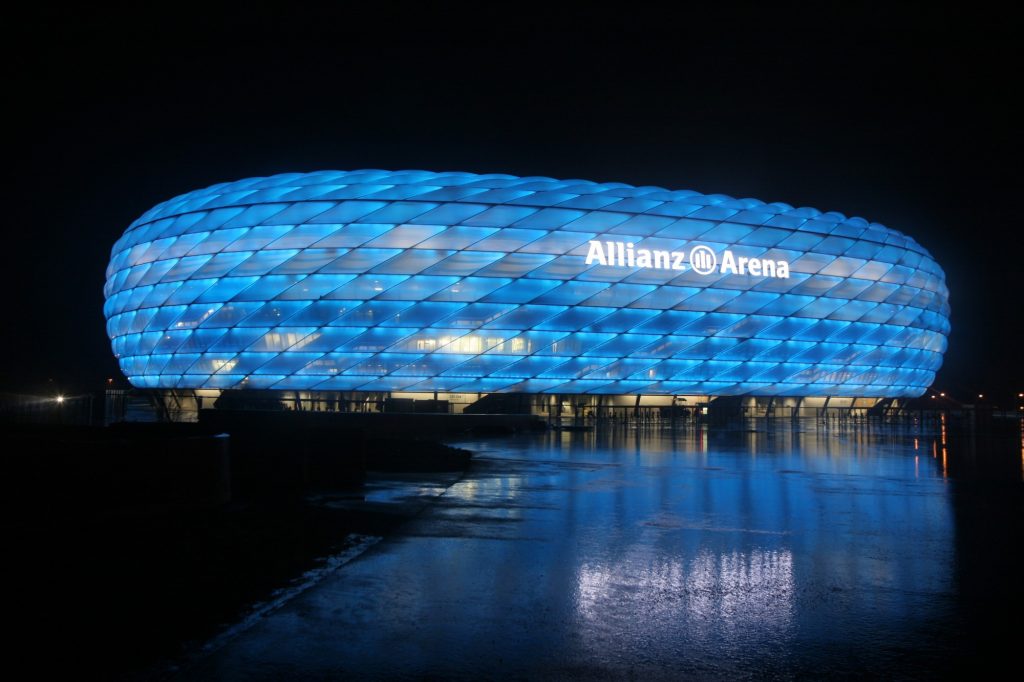 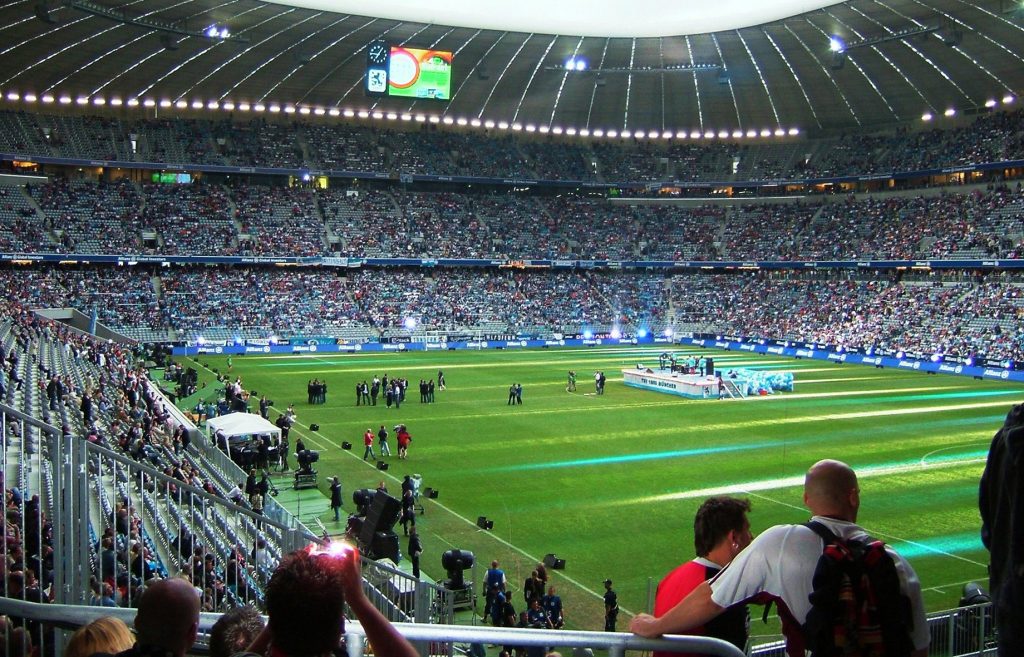 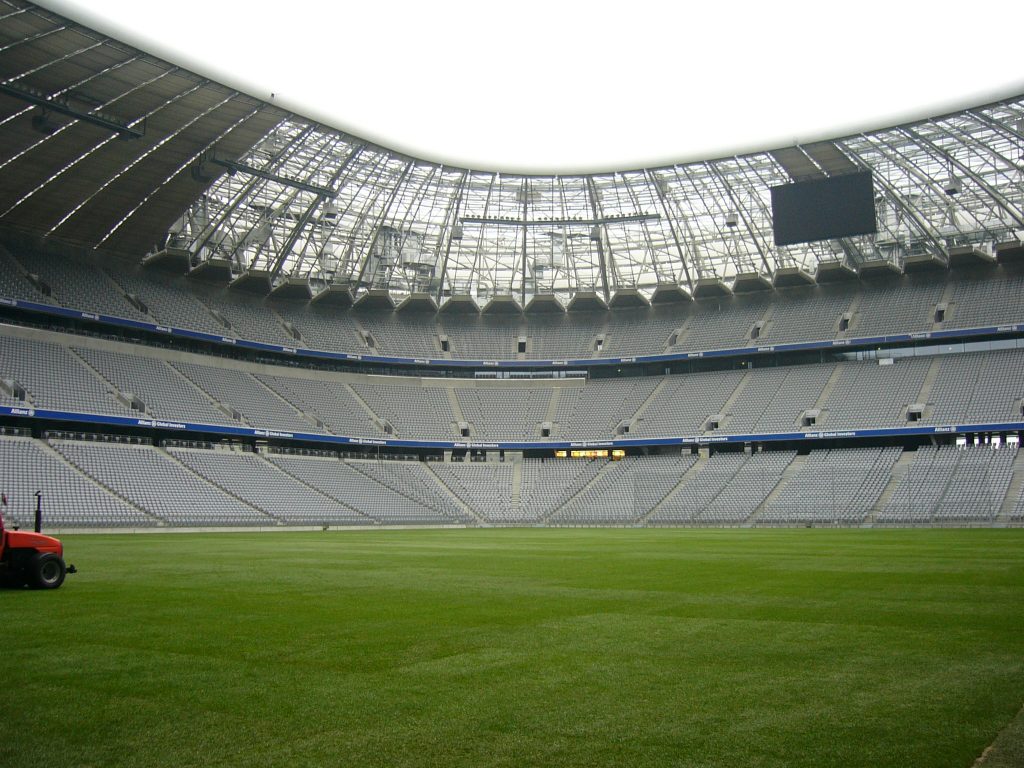 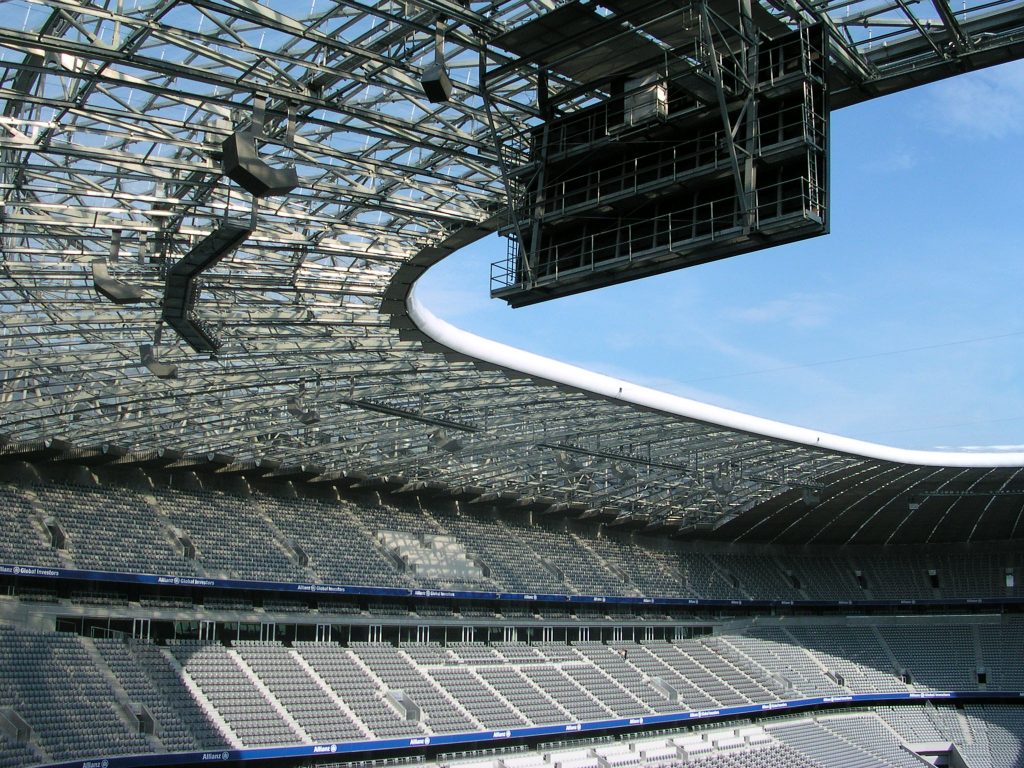 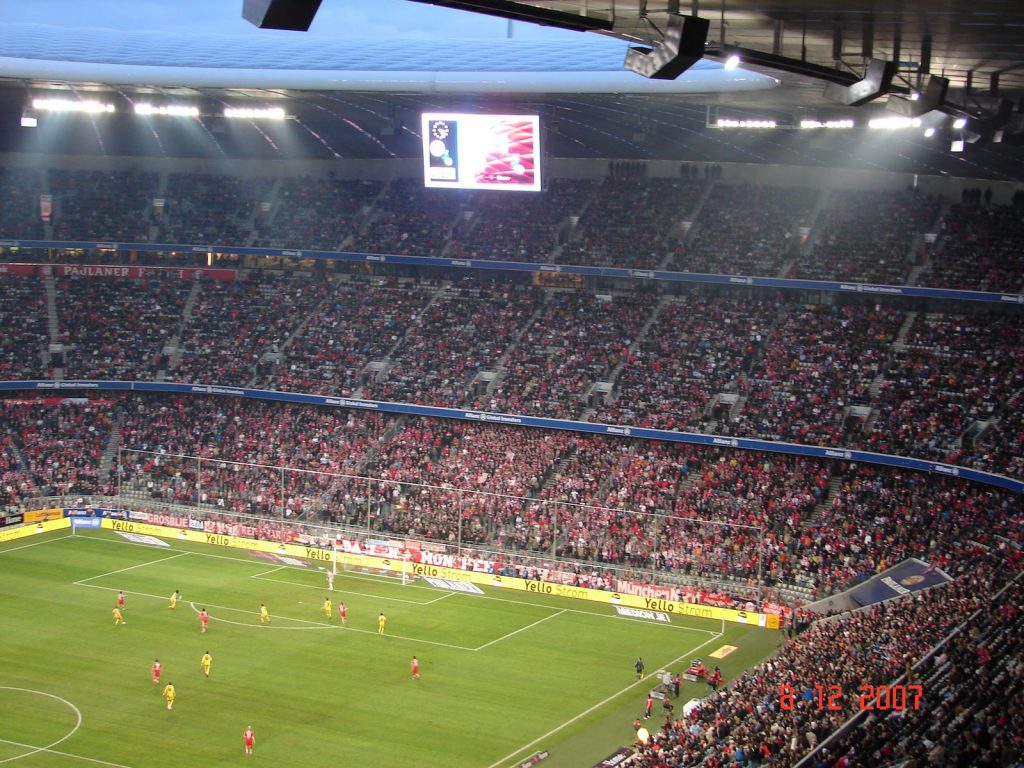 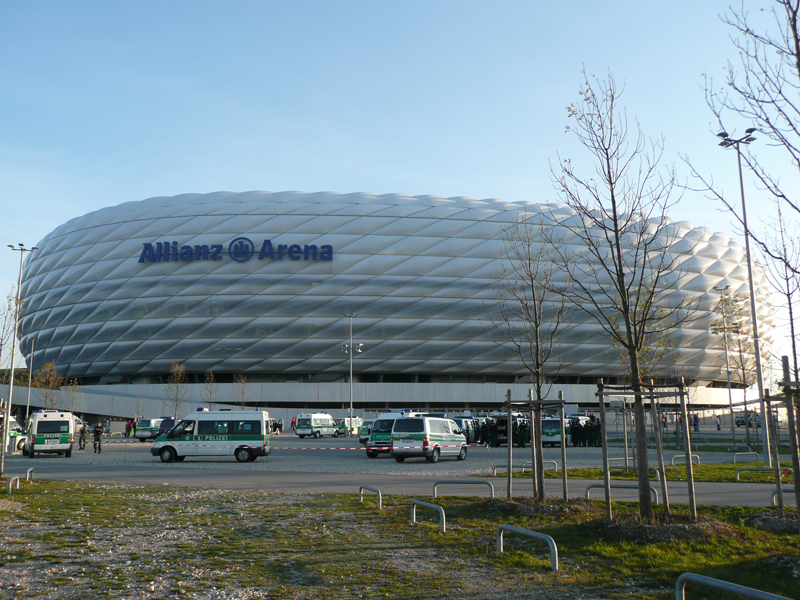 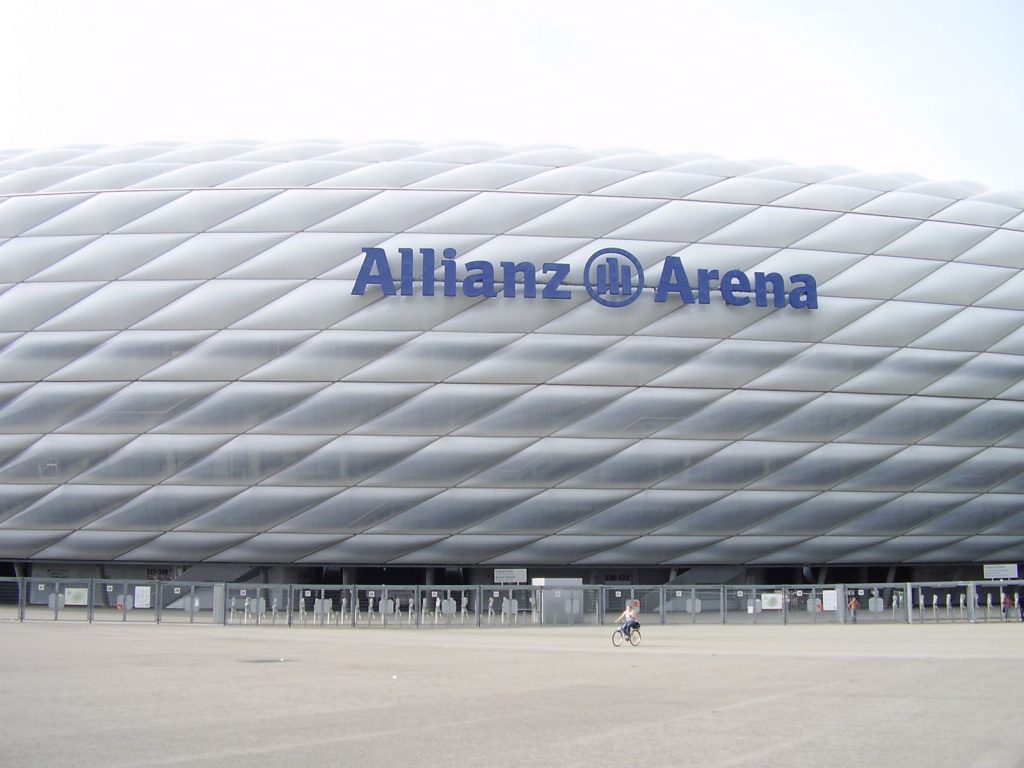 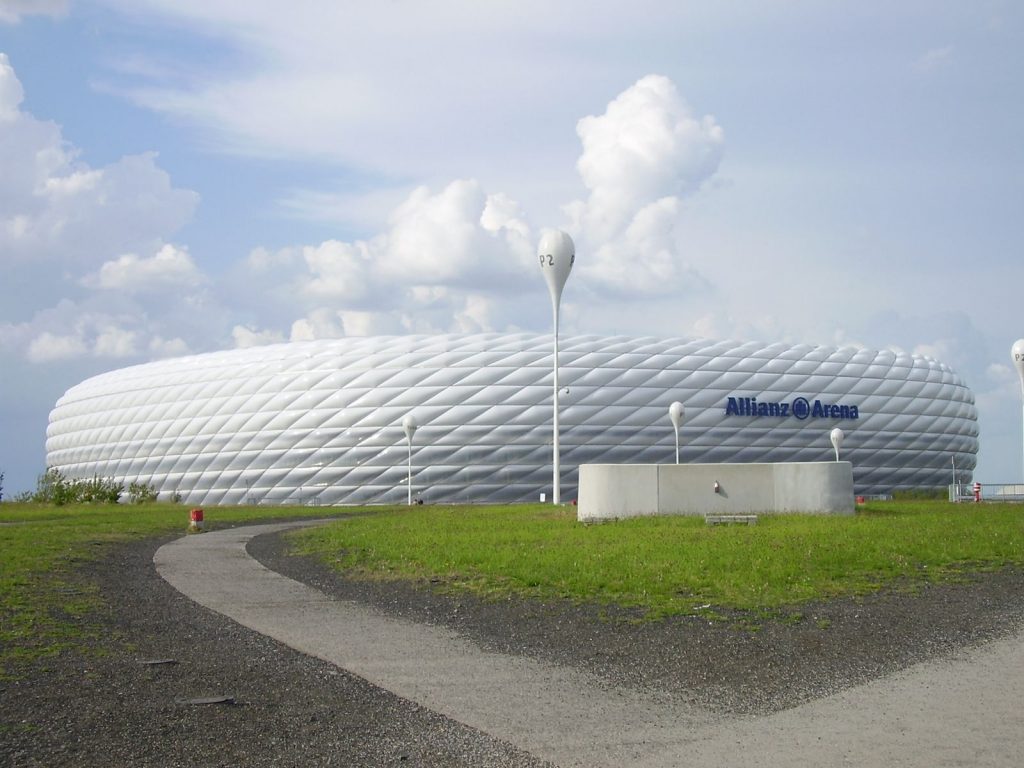 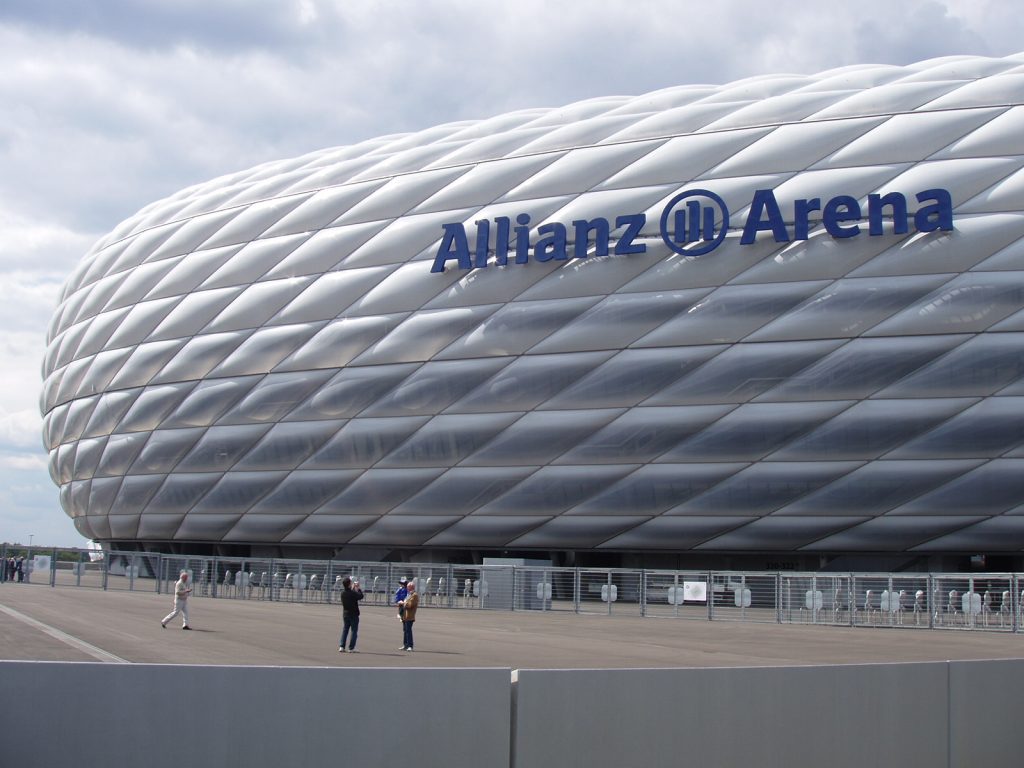 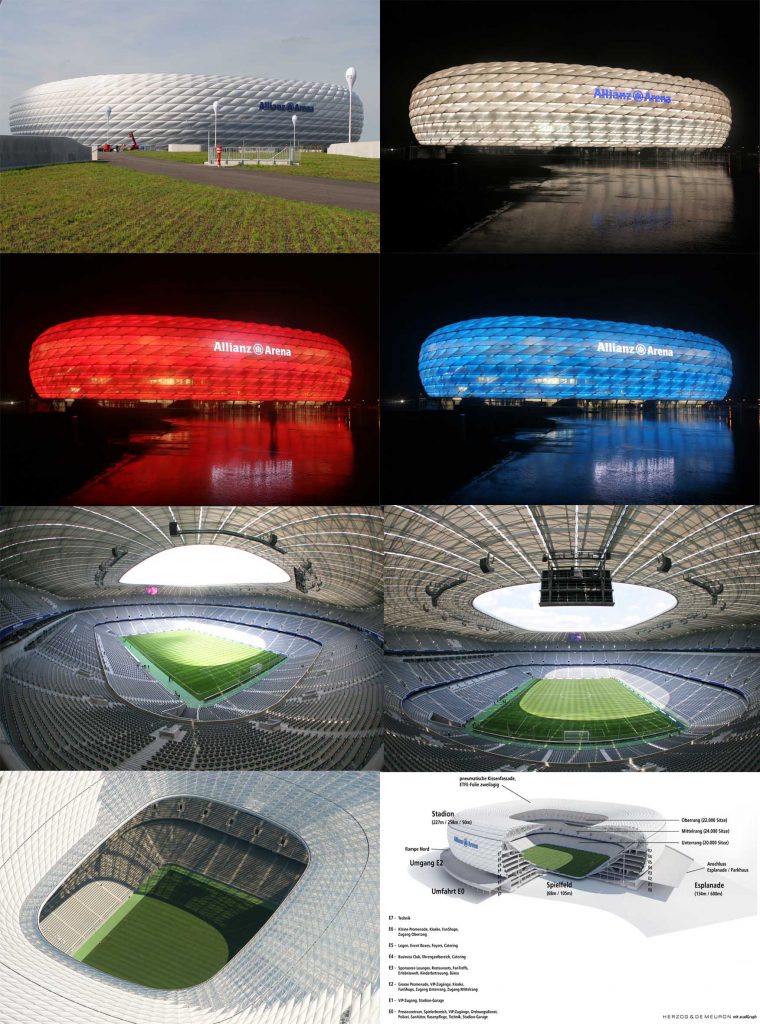 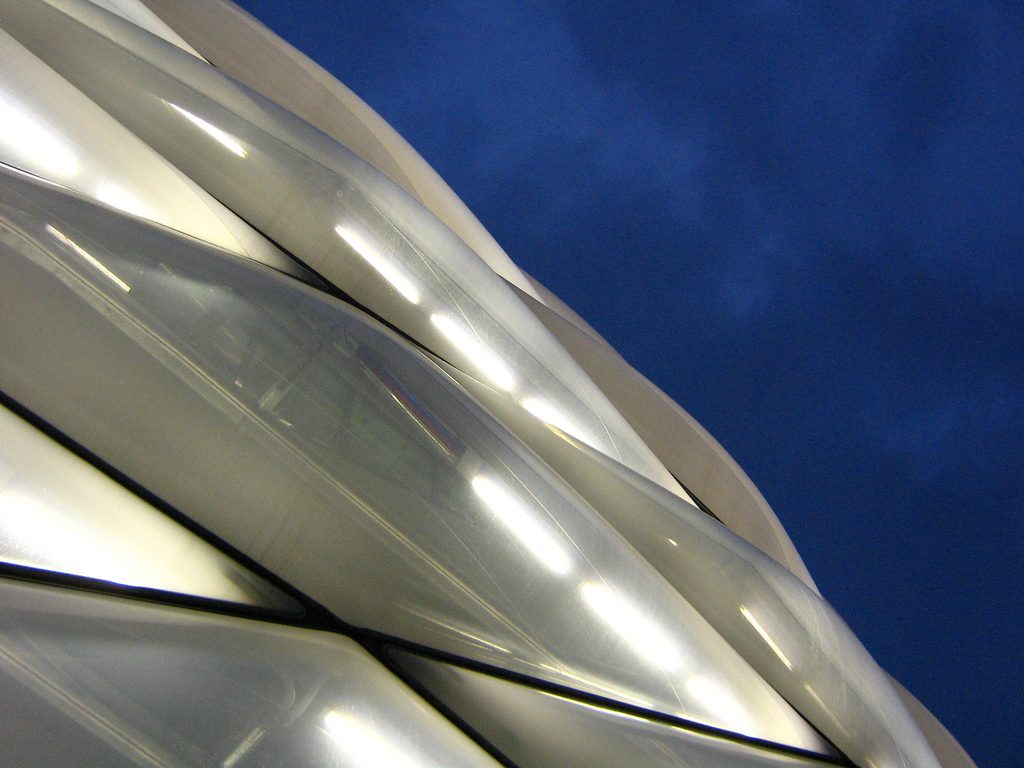 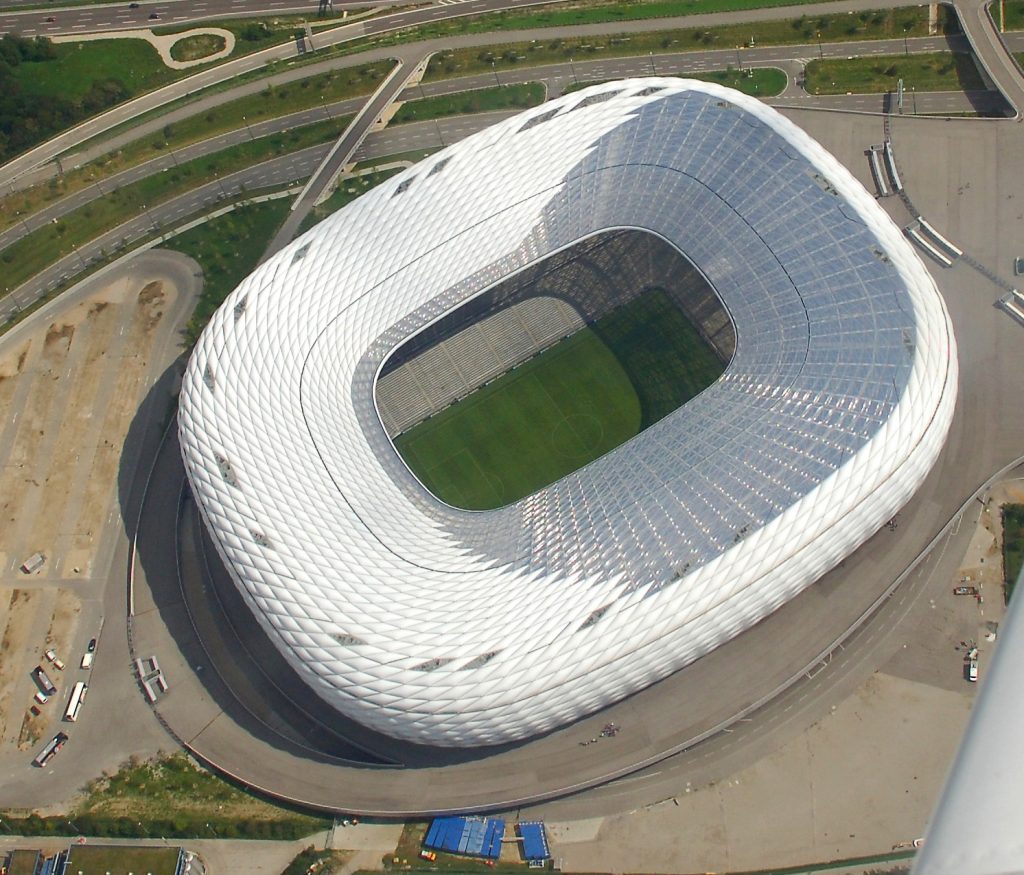 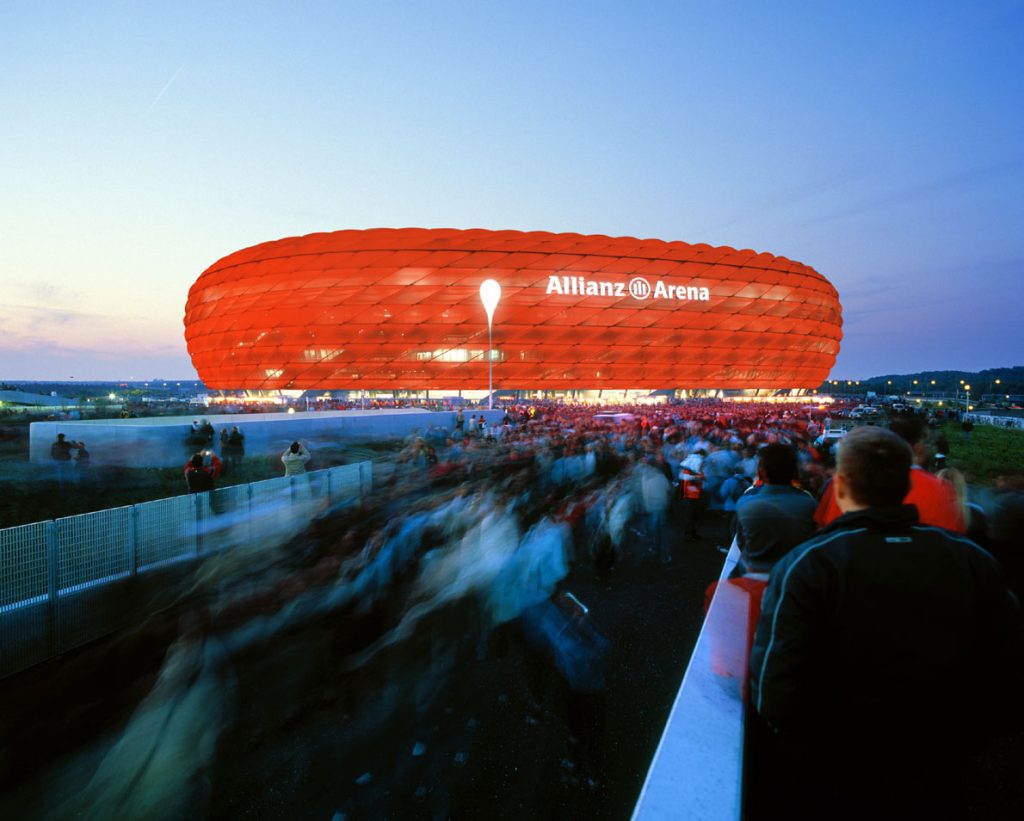 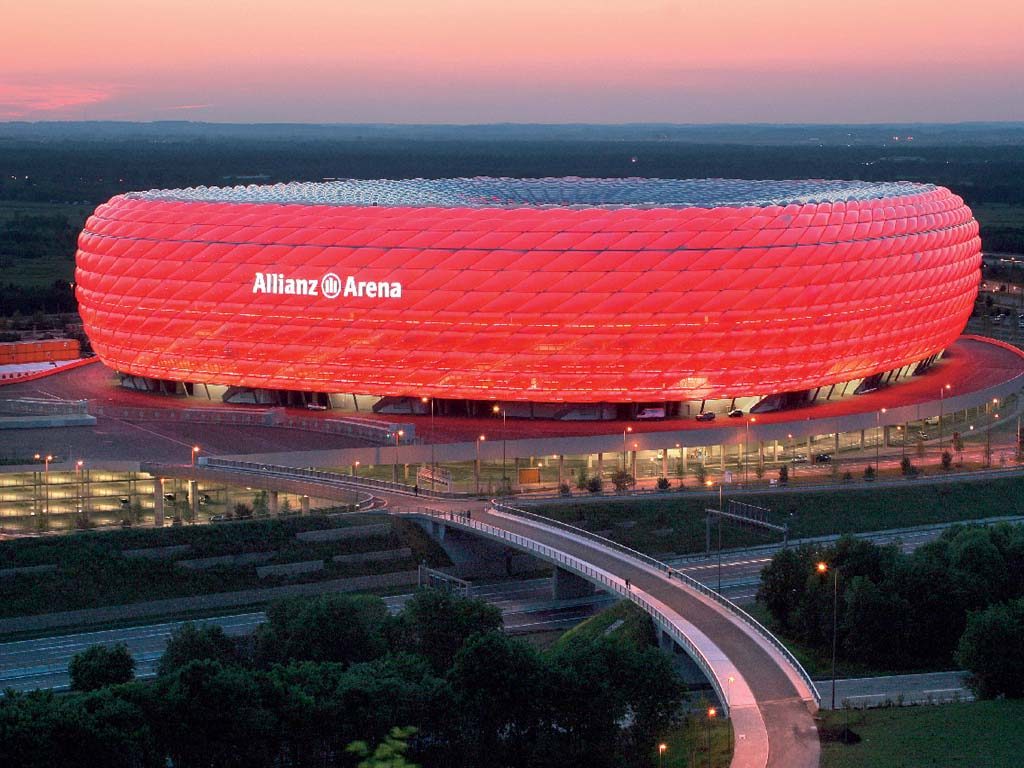