Broadly speaking one could say that the synchrotron light is a type of ray as thin as a hair, very intense and with a brilliance that exceeds a million times to x-rays. Exploited in an appropriate facility becomes a mighty giant microscope to see atoms, molecules and structures of materials. The light intensity synchrotron X-rays ranging from visible light by the human eye.

For this scientific advance can be developed and used at full capacity, it was necessary to develop scientific and technological infrastructure was provided by the architects Eduardo Talon Curtis and Alfons Perdrix Riau, together with a large team of collaborators, and carried forward by the architecture and engineering firm Master, the work being funded equally by the Generalitat de Catalunya and the Government.

Surrounded by an agricultural landscape, which was part of the parcel polygon on which the building occupies developed 61185.63 m2. Access is by its southern front, km 3, BP-1413 road, which connects Sant Cugat and Cerdanyola. The complex of the ALBA Synchrotron Light Laboratory, is located within the Partial Plan Directional Centre of Cerdanyola del Vallés, in the Parque Tecnológico del Vallés, municipality of Cerdanyola del Vallés, Barcelona province, Catalonia, Spain.

Topography with a clear North-South gradient, coinciding with the south face is one that is oriented Collserola and the best views were decisive in deciding the implementation of the whole.

In an aerial image of the Main Building Synchrotron looks like a spaceship round and silver, but in the words of Eduardo Talon and the project team, which relate to “a shell embedded in the ground, as if it were a great shell stuck in the sand, looking like a solid offering natural protection while it fuses with the dynamism of the helix.

The futuristic look of this building is intimately related to its mission of science and technology, forming a circular spectacular building which is 140 meters in diameter.

The cover consists of 8 segments or sectors has a variable geometry distributed in three different heights and with a separation between them of 1.80 meters, allowing natural light to enter.

In this part of the building the roof is opened by a lattice of metalwork, creating a translucent medium.

On the outside of the Critical Area in the main building is the slab which constitutes the support of the experimental area. It is intended to locate the individual lines of experimentation, the walls of the tunnel and bunker Linak Alba, attached to the inside perimeter of the slab and with a layout almost concentric. This slab has an outer radius of 60 meters and the inner boundary is defined by the inner wall of the experimental line over a minimum length in excess of 30 inches. Its width varies between 22 and 29 meters in the LINAC (linear accelerator)

The main building is designed to accommodate Alba Tunnel, which runs its circular and has attached the Experimental Areas as a thorn that connect to the central body and the Areas of Service.

Alba tunnel is located on the slab of the Critical Area, including the Experimental Area and Service Area of the Main Building. Its geometry is determined by the equipment it contains and the layout of the different experimental lines. Interior clear height is constant, 3 meters, the exterior is variable, from 4 to 4.5 meters. It has five access points to the interior, through mazes, from the service area. Its length is about 268 meters with an average radius of 42 meters.

The building that houses various service areas minimizes the environmental impact to be buried under a cover that preserves the original topographic profile.

Two sectors extend the Main Building on the Technical Building, covering part of its green cover, but this extension is only visual and the outer edge of the housing has a support structure itself.

Architecturally include perimeter walls with variable height and reach and non-constant section. These define the roads and buildings, facilitating their integration into the environment

This unique architectural complex located at the top of the plot the two volumes that made up the building, the main building and the technical building.

Distributed by 23,000 m2, includes plants are located in underground workshops and energy production facilities, a plant at ground level and two upper levels.

The eight segments that make up its coil cover are publicly known picture of the complex. Its plan is circular and is located at a height half of the plot, hosting all office activities, social and scientific activities.

Inside the main building is located the so-called critical area. This is the outer ring where lie the complex of accelerators and beam lines associated, ie, the tunnel housing the machine Alba and Experimental Area. This area must meet, inter alia, strict requirements in terms of mechanical stability against deformations and vibrations in the short and long term.

These are located on the south, an extension of the main building and further south, opposite the main entrance is located outside the parking lot.

All offices are interrelated through a central atrium which sunlight penetrates, and where they have installed two panoramic elevators.

In the Technical Building, located at the top of the plot, you have placed the areas of facilities, electrical, thermal production, warehouses and workshops.

The building is divided into three zones, two modules on one level and a central module that connects the basement rooms gallery technical service responsible for distributing supplies throughout the Main Building.

Gallery and Disposal Service in the basement

This gallery connects the Main Building and Technical basement level, allowing transport energy concentrate with a path that runs along the longitudinal axis of implantation.

It also has an escape route protected by a double gallery that begins under the service area and continues to the south facade of the building, leaving a secure outdoor space under the Area Offices.

The delegation of Civil Works Caluna I was responsible for carrying out development works of the whole plot, building a perimeter road traffic that runs between the Main Building and the Building Technical and providing access and service to all built-up areas From the main entrance located in the central area of the plot.

Networks have also been made for sanitation, irrigation tanks and some outbuildings, a building that integrates access control station or earth berms.

To avoid affecting the foundation or structural elements of the Main Building or Critical Area Slab, the approach adopted was to build two entirely separate structural systems, avoiding direct contact between them to prevent the transmission of stress or vibration.

Both structural and foundation areas were:

On this slab will support the tunnel Alba and experimental sections at which the structure was built entirely independent of the other structures of the Main Building, to prevent the transmission of any vibration in the short and long term.

The slab had to be monolithic, its performance is divided into 20 sections or pads, which were performed in an interleaved, leaving the iron passes between sections and using retardants set to ensure that project status

In turn, the foundation of the Main Building was divided into two zones

1 – Deep foundation through piles CPI-8, 307 of them carried out from 45 inches to support the perimeter columns to the critical slab, which can transmit the loads and vibration below the slab to avoid possible effects

2 – Shallow Foundations, by pads on the rest of the building.

This was done in parallel with the execution of the foundation and is basically formed by concentric rings and radial branches. All columns and elements of the building are connected to that network.

To ensure the flatness of the slab formwork had to design specific, it was imperative that the forms or suffered displacement and arrow. The specific type of formwork for this project allowed to pass through 3 layers of armor and, in turn, ensure absolute stability. New monolithic connections were designed with curved panels, conventional flat panel formwork and shuttering joists. Formwork was screened by mixing 3 different types of catalog Peri having to develop binding elements specific to this work in order to join two different types.

Enclosures that were arranged between different levels of the segments of the housing and allowing entry of light are cellular polycarbonate.

In the area housing office is open by a regular lattice of structural metalwork basic geometry triangulated by a curve of large radius and is complete with a feature-rich laminated glass.

20 were distributed evenly outlet for smoke extraction in case of fire in the nave, also on the nuclei of stairs, around the skylight that covers the atrium and the office area.

For experiences in other synchrotrons are known to have a high probability of being struck by lightning during a storm, so all the main building of Synchrotron Alba has become a Faraday cage.

The slab rests on a gravel bed 1.7 meters thick, suitably packed and protected with two layers of concrete 15 inches thick each. 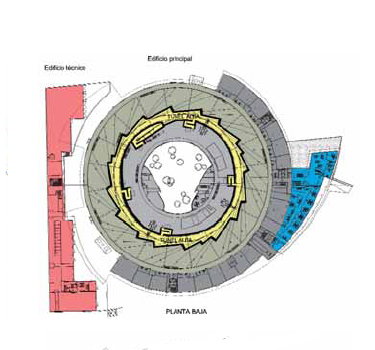 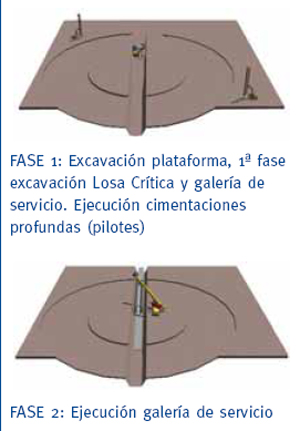 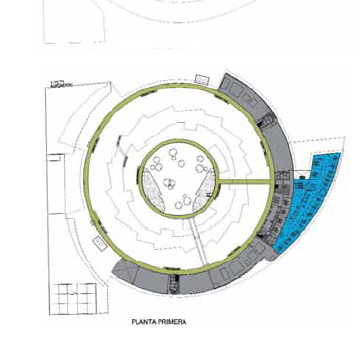 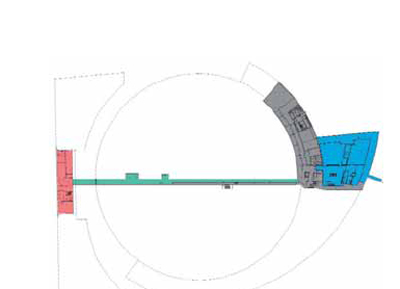 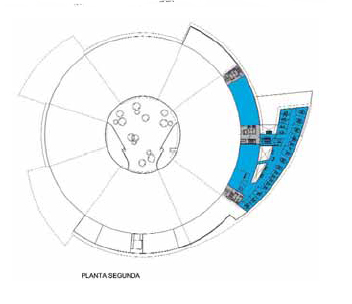 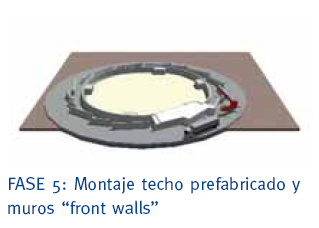 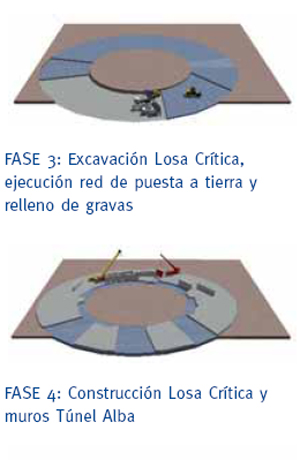 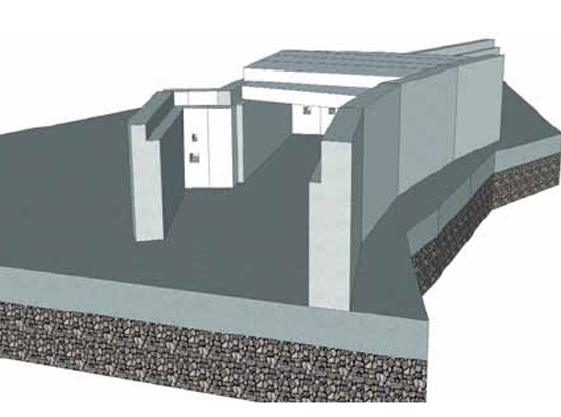 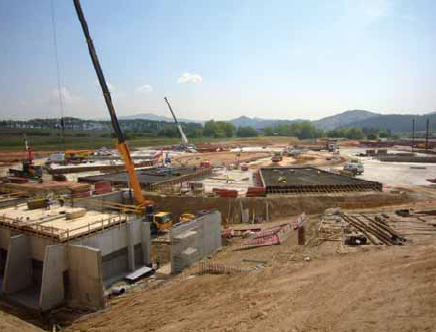 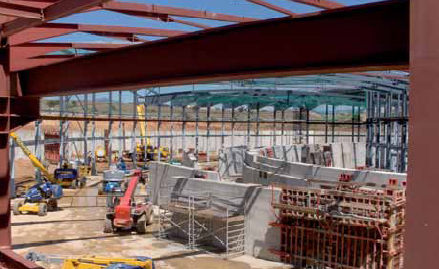 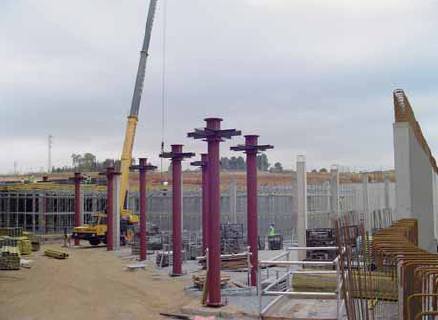 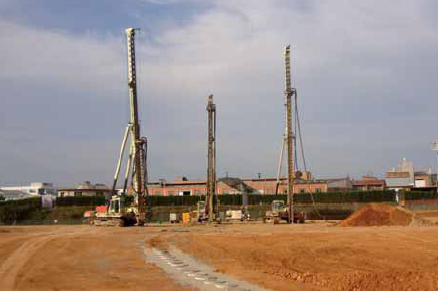 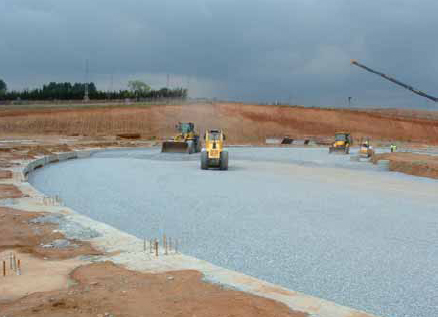 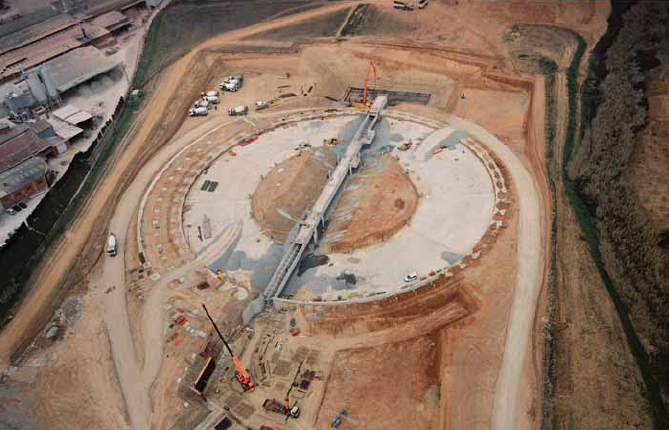 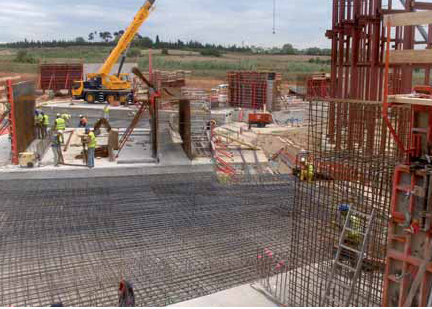 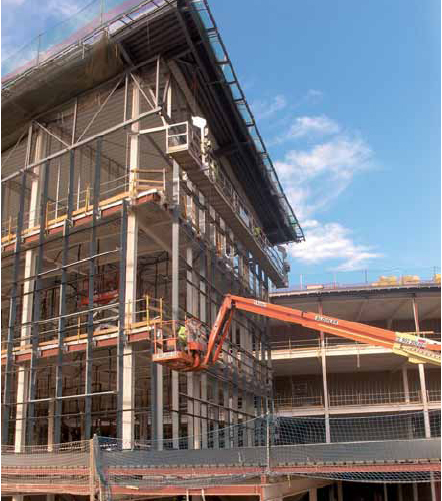 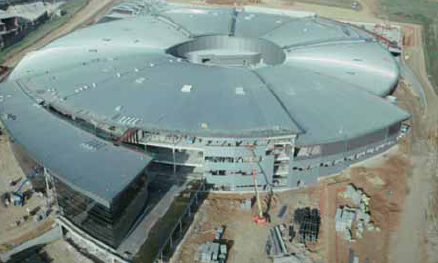 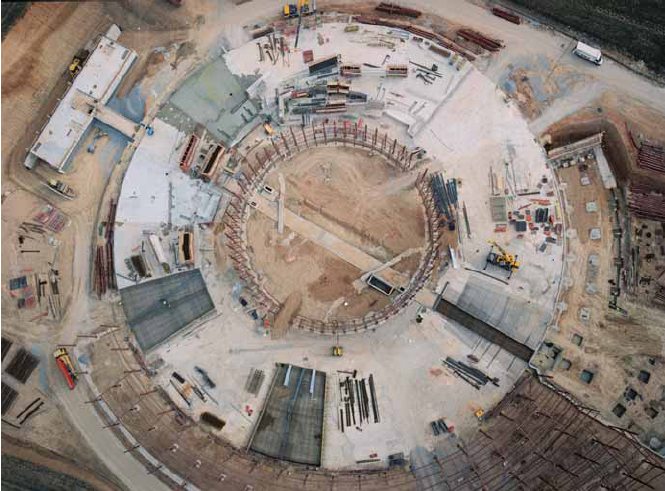 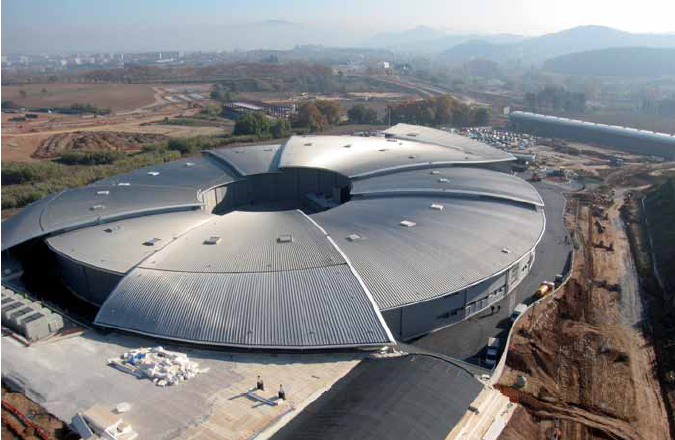 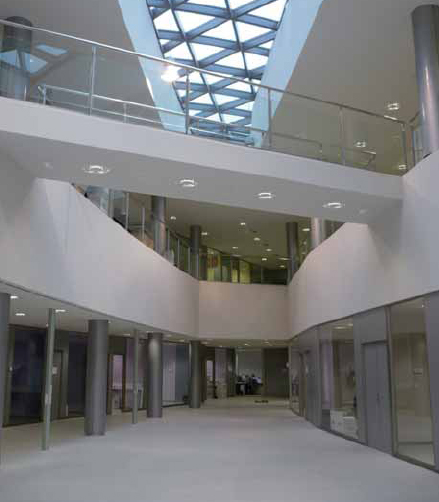 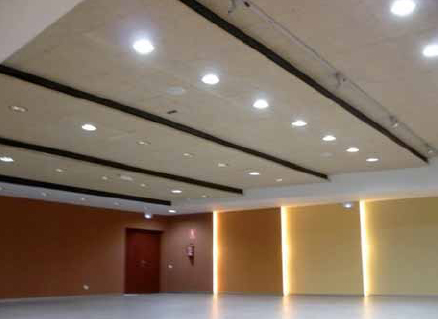 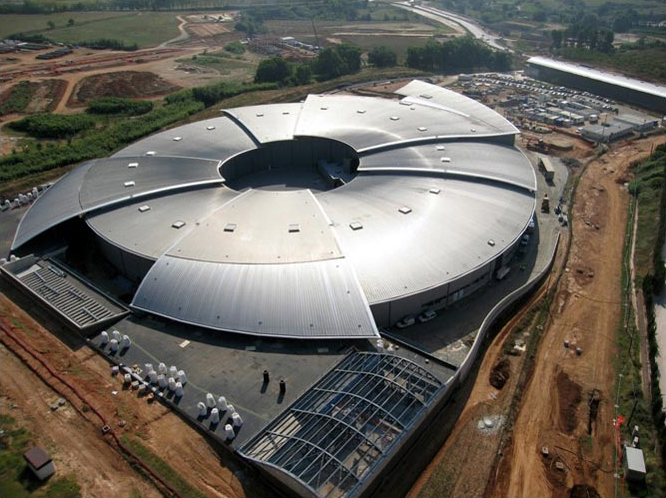 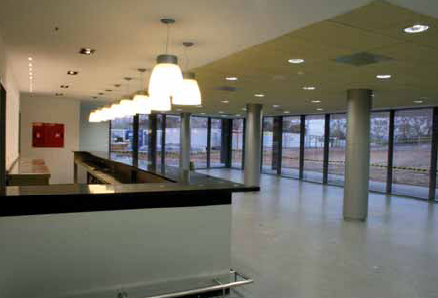 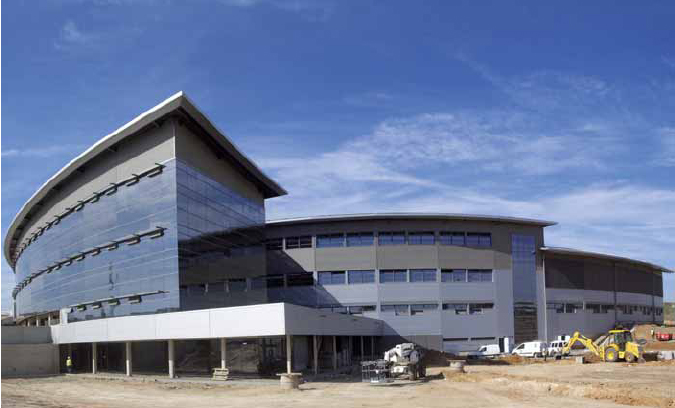 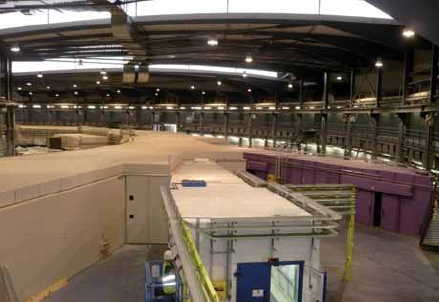 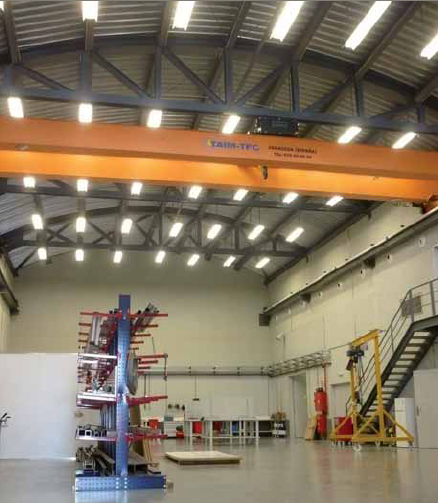 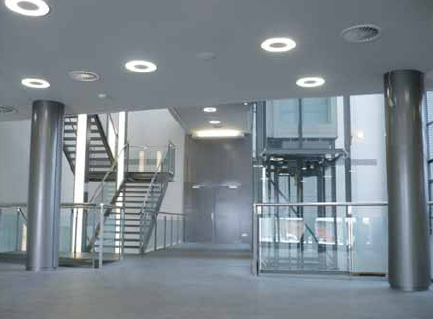