Located in the city of Kuwait, the Al Hamra Tower, with its 412 meters in height is, at the time of its completion, the tallest in the world with one side stone tallest building in the city. Among the many awards he has received, some were granted him before his inauguration as Miami Architectural Biennale 2007, the Chicago Athenaeum or the MIPIM / Architectural Review, both in 2008.

A tower of this height was not the original plan for the site located in the center of a promontory jutting into the Arabian Gulf. The owner of the land consortium, Al Hamra Real Estate, initially expected to lift a 50-story building for offices, a 4 storey building adjacent to the mall, both designed by a local firm. But in 2005, shortly after the start of construction of the mall and start digging the tower, the Kuwaiti authorities changed zoning regulations to allow a much higher structure. The customer decided to go ahead with the business side of the project. For architecture and engineering of the new tower was called to SOM Architects.

Al Hamra Firdous Tower is located in the Al-Magwa’a Al-Shargi, downtown Kuwait City district, and since its opening has become a sculptural icon that offers spectacular views of the Arabian Gulf.

Kuwait City (Arabic: مدينة الكويت) is the capital of Kuwait, small country in the Middle East bordered on the north by Iraq and on the south by Saudi Arabia.

The geometry of the tower is based on a set of criteria that took into account the strategy of future financial customers, as well as environmental factors, sun exposure and wind loading.

The appearance of the building resembles a subtle, elegant and modern sculpture or a figure wrapped in a delicate veil of crystal in which the profile of the peninsula is reflected. The resulting shape provides transparency into the Gulf and opacity to the severe desert. The purity of form, expressed by a simple operation of elimination, is a timeless and elegant marker in the heart of Kuwait. 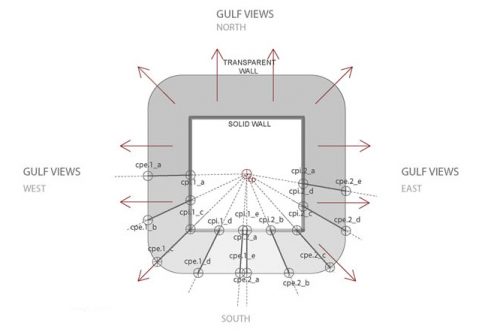 Most of the Al Hamra flows in a straight line, but the building has three glass facades that allow occupants to enjoy the view of the Gulf to the north, east and west. However, a pair of reinforced concrete walls on the south side of the tower give the appearance of wearing a wavy coat.

The facades of the tower facing Gulf contrast the impression of transparency, granted by the glass, with the opacity of the facade looking south toward the desert, finished in stone. The south facade, rotated 130 degrees and two fins that run up and down in opposite directions, is designed to protect the building from severe desert sun, minimizing heat absorption. The deep windows, carved angle on the south wall thick views across the city and peninsula to the side of the desert.

In order to maximize the views and minimize solar heat gain in the office floors, a quarter of each floor plate is not chiseled south side, causing the displacement of entire tower from west to east. The result of this action reveals a rich monolithic stone on the south wall, framed by elegant flare ribbons winding walls defining the iconic shape of the tower.

To meet customer requirements in terms of office space and features, SOM had to cut each floor slabs 25%, the maximum allowed. The desire to maximize water views suggests a plane without office space, facing south. However, solar analyzes in order to reduce the gain of brutal desert heat, supports the abolition of the quadrant in the southwest corner of each floor.
Meanwhile, computed studies of the dynamics of fluids and subsequent testing on physical models, wind tunnel showed that a tower with a slightly irregular profile would be most effective to mitigate the shedding vortex, a phenomenon that creates whirlwinds and induces unwanted lateral movement in historic building now. “If the shape of the tower changes as you ride, organized vortex formation is broken,” says Mark Sarkisian, director of seismic and structural engineering SOM.

In anticipation of a potential living space on the top of the tower, SOM started cooling towers above the podium Al Hamra rather than on the roof of it. 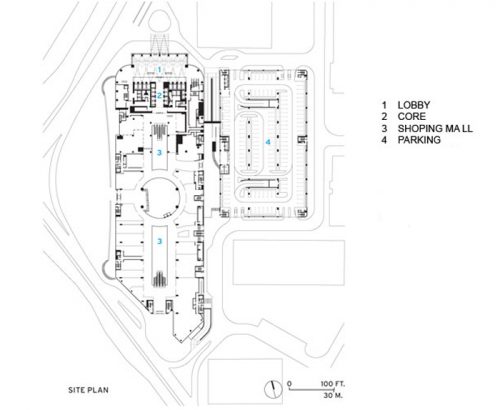 La Torre, with 195,000 m2 of retail space and offices, an area of ​​23,000m2 intended for a high-end mall with five floors. It also has a, a cinema complex and theater, spa restaurant on the terrace and parking with 11 floors. Over 70 floors are intended for office space

The entrance hall is 20 meters high. The geometry of this area is generated by the application of the principles of the laminar structure supporting the tower above and below articulates space. This towering foyer with floor and wall core coated with the same limestone sculptural south facade.

Among the needs of clients included a measure offices and configuration desired spaces with an area of ​​approximately 2,300 m2 for customers interested in renting an entire floor. It also called the nucleus for the outside narrow curtain wall, no more than 14 meters, and the offices were oriented to the Gulf, both on the north, east and west.

The building is divided horizontally into three zones stacked office. Visitors reach the top two, taking the express elevator lobbies offering meeting space and other services, to approach the intermediate floors used “local elevators”. Using VIP elevators comes directly from the main lobby to the crown of the building where the restaurant. 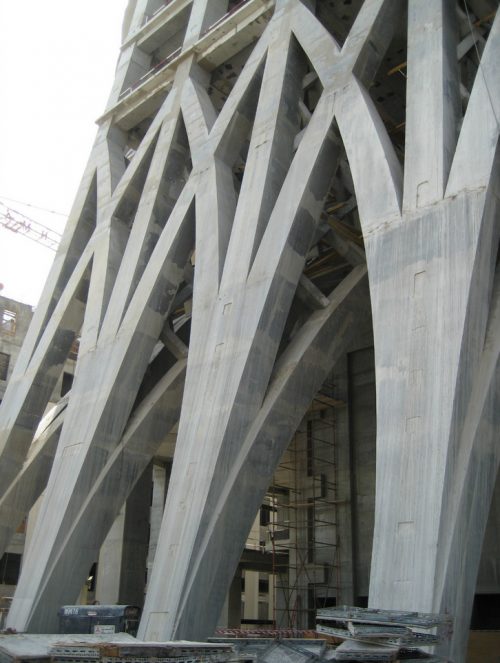 The solid south wall, and flared geometry, is generated in order to decrease the absorption of solar radiation. The openings are based on the ratio of the envelope and its position relative to the sun. This wall not only protects the building from critical environmental conditions also assumes the role of structural backbone.

The point at the top of the tower not only solves the complex geometry of the carved flared walls, but also involves the continuation of the sculptural shape up. On each floor of the tower bridge connects the two wings. As the tower concept took shape, it became clear that the spiraling concentrate gravity loads on the west side of the building footprint, below the southwest wall, while in the north and east they would be minimal. In response to this charge differential, engineers devised a reinforced concrete raft nearly four feet thick supported on 289 piles, each between 20 to 27 meters long, deeply embedded around the areas of greatest stress.

Perimeter columns tilted outwards, reinforce and shape on the north side of the building, while that increase the depth of the hall and create a dramatic entrance. The columns form part of a continuous band system reinforced concrete vaults called lamellae.

The laminar structure provides continuity lobby, moving gravity loads from the building towards the ground and acts as a strengthening component, being fully integrated with the rest of the structure. The system, developed through nonlinear buckling analysis, it works by reducing the unbraced length of the columns of the lobby and by decreasing the structural demand for each of them by sharing the load with parallel elements. The main webs are concentrated in half a square meter located on the lobby floor. Without the use of this technique bracing, would have required a nearly three times larger perimeter columns. 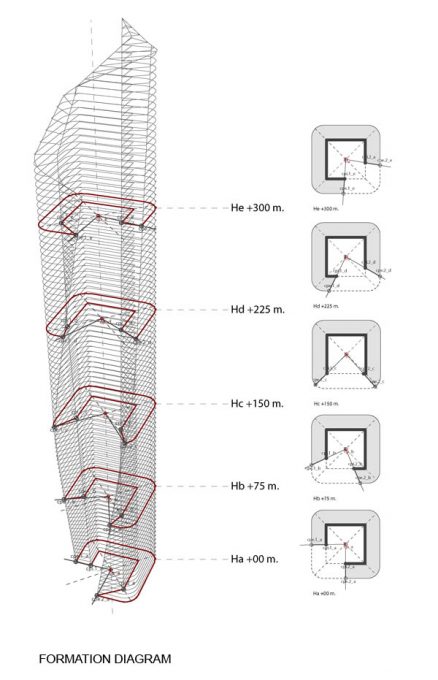 Like many tall buildings, Al Hamra has a central core shear built in reinforced concrete and a sturdy perimeter frame. However, approximately one quarter of the square ground plate has been removed. The deleted portion gradually changes at each level, moving slowly from the southwest corner, near the bases of the building where it meets the podium, to the southeast corner at the apex of the tower. Resulting from the cutting edges are defined by a pair of walls hyperbolic paraboloid.

A pair of “flame walls” hyperbolic paraboloid concrete define the edges of the gap gradually changing. In the resulting hollow with a wall is located 1.50 m thick reinforced concrete with punched openings angled to control the penetration of the sun. In each office floor, behind this facade there is a strong circulation corridor that connects the two wings.

Construction Chunky south facing wall and the veil walls, which play an integral role in the severity and side loading system of the building was difficult. As part of a so-called “correction program building” designed by SOM, contractors adjusted the “self-climbing” formwork with each heat to compensate for the displacement caused by the “counter” geometry.
The process represented the elastic movement of concrete under its own weight during construction and expected to take place the long term due to shrinkage and deformation, which can last for up to 10 years.

The main materials used in its construction were reinforced concrete, steel, limestone and glass. 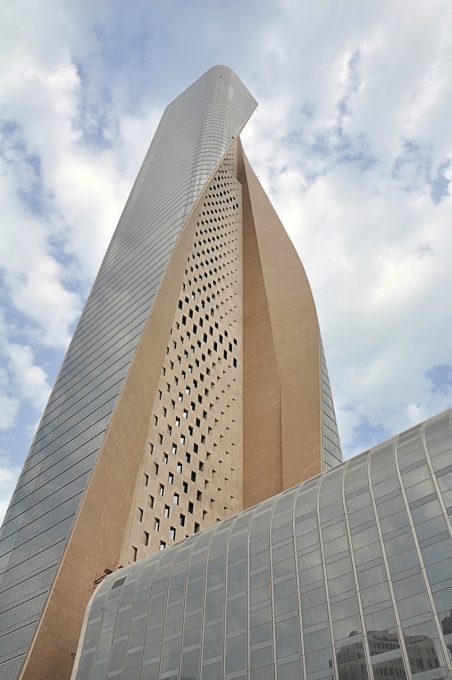 In the structural framework 6,000 tons of steel and 38,000 tons of reinforcing steel in the rest of the building were used.

Concrete is the material used in the construction of the Al Hamra Tower as a malleable material is needed to get the sculptural molded shapes of the walls. 500,000 tons of reinforced concrete, 195,000 m³ were used.

In plants dedicated to the mall is particularly reinforced concrete used and the 60,000m2 used for the parking precast concrete.

Watermarks concrete formed in the lobby in the laminar structure are painted white.

The 258.000m2 limestone lining the structure makes this tower in the largest structure in the world coated with this material. Engineers Architects exposed concern that flared walls not abide the weight of the stone. The solution was to use limestone tiles on the lower floors and the upper floors “trencadis”, a mesh coated with crushed limestone, significantly reducing weight while maintaining the same look.

Except for the southern facade facing the desert, the rest of the building is completely coated with insulating glass, IGUS, in silvery tones. These windows are characterized by low emissivity coating and compatibility with the heating and bending process required to manufacture glass that surrounds the corners. These curves units represent 30% of the crystals of the building.

The sheets in the structure of the base, were built with fiberglass molds, made from 3D drawings generated by those responsible for SOM models. The construction of the flakes was a slow process, requiring almost 100 days to complete.