Hanging Akashi-Kaikyo Bridge (AKB), in Japan, also known as Pearl Bridge, with a total length of 3.910m is formed by three spans, the central 1990 meters. Opened on April 5, 1998, became the longest bridge of its kind in the world, surpassing the Humber Bridge in the UK that has a central span of 1,410 meters. The bridge was designed by engineer Satoshi Kashima and built by Matsuo Bridge Co., responsible for building some of the most famous bridges to date, including the Akashi-Kaikyo Bridge. The Kobe earthquake on January 17, 1995 had its epicenter just between the two towers of the Akashi Strait Bridge. The initial length was 1.990 meters planned for the main span, but the quake moved the towers 1 meter separating, when they had notstarted construction of the deck yet. The change in length was absorbed into the final design which slightly altered in some meters. The bridge towers have mass dampers in order to reduce vibrations in the structure during earthquakes and typhoons.

The original plan for AKB, that also contained railway lines, was about to be canceled by the government, but in 1985 the decision to limit its use only as road was taken. In April the following year, took place the opening ceremony and after several investigations and procedures, construction began in May 1988 and lasted ten years. 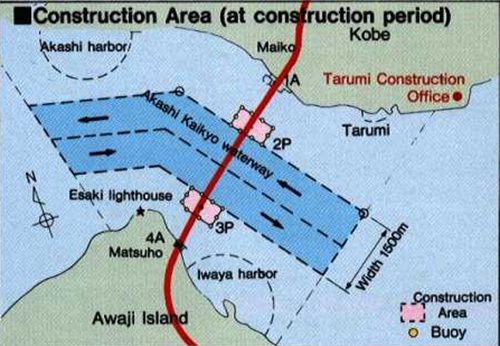 The bridge connects Kobe, on the island of Honshu, with Iwaya on Awaji Island, Japan, crossing the busy Akashi Strait, which records an intense traffic maritime, over 1,400 ships per day, with an important port of supply and release of goods. At the time of design engineers had to think a bridge would not block sea traffic. They also took into account the weather. Japan experienced some of the worst weather on the planet. Winds cross the Strait, the rains are intense and hurricanes, tsunamis or earthquakes strike the island almost annually.

The Akashi Strait, connecting the bay Osaka and Harimanada, is about 4 miles wide. The segment crossed by the bridge has a maximum depth of 110 meters and a maximum current speed of 4.5 meters per second. The Strait has been a productive fishing area since ancient times, and is an important waterway, used by more than 1,400 boats a day. To ensure the safety of maritime traffic, has been established by law, an international waterway 1,500 meters wide for safety of maritime traffic.

Geologically the floor of the strait is composed of diluvial sediments and granite. Akashi side strata consist of 40% of gravel of between 10-20 cm in diameter and Kobe side is a layer made ​​of hard unconsolidated muddy and sandy silt or sandstone.

The Akashi-Kaikyo suspension bridge has a length of 3,911 m and three bays. The central section, between the main towers is 1,991 m and the other two 960 m each. The height of the main towers is 282.8m above the water, 297,30m until the end of the anchors, the structure is submerged 60m below the water level. Originally the central span was designed to measure 1.990m, but the Great Hanshin Earthquake, the January 17, 1995, moved the 1m towers, so far the only thing that was up. The new distance is incorporated into the design.

At its core the bridge offers a height of 97m from the water level to the bottom of the board and a light of 65.75m for the passage of vessels.

In the design of AKB, there was special consideration on the effect that the structure would have on the environment. The appearance of the towers was designed to meet the aesthetic issues, ‘reliability’, ‘future’, and ‘nice balance between light and shadow’, in view of the structural characteristics of the tower and the aesthetic characteristics of the surrounding. The anchorages are designed to make the huge concrete structures seem small and balanced. Design features include special shapes and exterior wall cladding.

The gray-green paint used for AKB is different from the color used on other bridges Honshu-Shikoku sistma linking the islands. This color was chosen because it is a modern color that blends well with a cityscape and is active, but gentle, beautifying the colors of sea and sky Strait. To reduce maintenance requirements, a final coat of paint highly resistant fluoropolymer was used to maintain the shine and prevent corrosion.

The bridge was built under severe conditions, such as extremely strong currents Strait and tidal depth, using the latest technologies developed for the construction of bridges. Japan experiment one of the worst conditions on the planet. Floods, earthquakes, high tides and tsunamis.
The Japanese engineer familiar with the terrible weather conditions, placed the bridge deck on a support frame formed by a complex network of triangular support below the road. The open network of triangles gives rigidity to the bridge and also allow the wind to pass through the structure.

Two main springs as an extension for laying the foundations of the towers were built with round and flat, the largest with a diameter of 80m and the other 78m. Drawer descending method was used for large profundad position and ocean currents in its construction. Each anchor requires, an average of 350,000 tons of concrete. 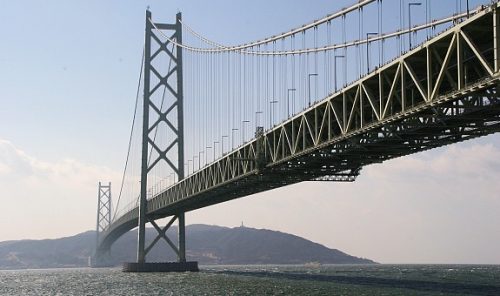 Also, large deep foundation anchors were built on reclaimed land with many new technologies. All foundations were well designed to cope with the strong earthquakes with a seismic design method of new research, together with a new kind of concrete result of a mixture of different water resistant cements and erosion. Test your ability is to have withstood the earthquake of January 17, 1995 with almost no incidents, just the displacement of 1m of the towers, that given the strength of the movement can be considered minimal.

In the two main towers 20 mass dampers, TMDs, were placed, pivoting in the direction opposite to the wind when it blows on one side of the bridge, dampers sway in the opposite direction, effectively balancing the bridge and placed negating the influence of wind. In the bridge design system strengthening beams with two hinges allow the structure to withstand winds of 290 km / hour, earthquakes with a magnitude of up to 8.5 on the Richter scale and strong currents was also applied. The bridge also contains pendulums which are designed to operate at the resonant frequency of the bridge to dampen forces

The two main supporting towers rise 282.8 meters above sea level, 297.30m to the end of the anchor cable, the bridge can be expanded by the heat of up to 2 m in the course of a day. Steel cables with a diameter of 112cm contain 36,830 lines of wire. The bridge is supported by two cables basically the central section, considered the toughest in the world constructed. 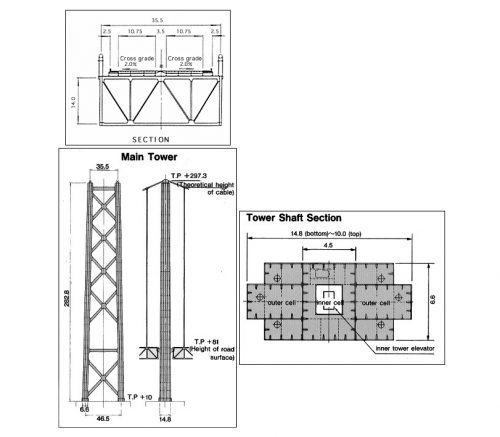 The primary tower is made of steel, and the shaft has a cruciform cross section which is insensitive to wind-induced oscillation. However, tuned mass damper is installed within the shafts to suppress oscillation is anticipated that during erection of the tower, and even at the stage of completing the bridge. A shaft of the tower is divided into 30 levels and almost all levels are composed of 3 blocks. Each block was made in factories and transported to the site and then hoisted by crane climbing tower that had a lifting capacity of 160 tons. Articulating high tension bolts were used to connect field. 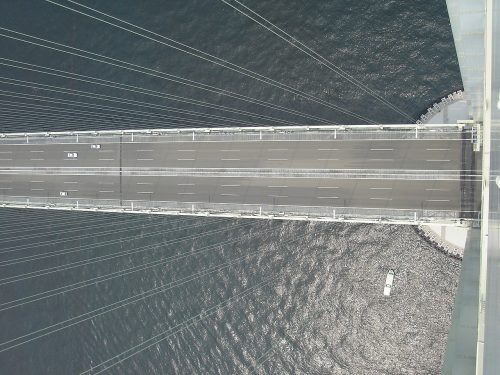 A foundation of the main tower weight of 120,000 tn weighing bridge from the main towers footbed transmitted. The footbed, 60 meters under water, was excavated by a dredger bucket. To overcome the difficult conditions of the strait, including deepwater strong currents and waves that caused vibration in the dredger during excavation, high-tech devices are used, such as Remotely Operated Vehicle System.
The drawers are installed using the “method of adjustment”, which involved the manufacture of the drawers in a factory, then towed to the site, submerging, and eventually, filling underwater concrete. The circular-shaped drawer has no directional property, and thus makes them more stable and easier to handle in strong currents of the Strait.
The construction of the stiffening beam, by the method of flat blocks, begins in the towers and main anchors, where a floating crane was used to install six cell blocks in the towers, and 8 anchors.

The 4km of the pathway for vehicles that crosses the Akashi Strait is divided into 6 lanes. Is suspended and supported by the cables cover is held by its own weight, resulting in thousands of steel beams positioned to form a triangular grid. It took 15 months to put the 280 beam sections.
As added reinforcement, below deck, a vertical stabilizer with a form like the fin of a plane that runs through the center of the bridge and balances the pressure, both below and above deck. A steel mesh was placed in the center and side rails to allow passage of the wind.

The main material used in the bridge superstructure is steel. Has also been used reinforced concrete. For the foundation, underwater towers developed a new type of mixing a “concrete submarine that is not broken” (a “nondisintegration concrete).

The Akashi Kaikyo Bridge-has a total of 1,737 light fixtures: 1084 for the main cables, 116 for the main towers, beams and 405 to 132 for the anchors. In the main cables are placed three high capacity lighting tubes, red, green and blue. The RGB model and computer technology contribute in making a wide variety of combinations. A minimum of 28 patterns are used for special occasions such as regional public holidays or commemorations.

The length of the cables used in the bridge amounts to 300,000 kilometers, enough to circle the earth 7.5 times. Steel cables with a diameter of 112cm contain 36,830 lines of wire. 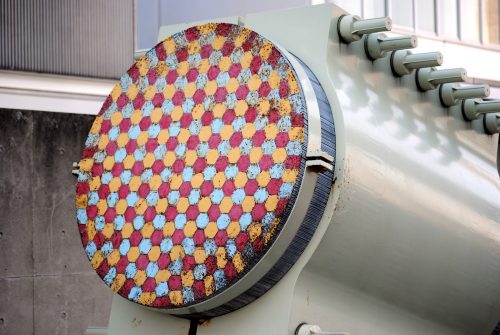 In beams were used 90.000tn reinforcement steel. Due to the large size of the bridge, the wind load which must face is higher than that of any other existing bridge when construction was completed. Using steel with high tensile strength for the beams made ​​very strong yet lightweight, and thus cheaper.
The reinforcing elements were prefabricated shaped panel were transported to the construction site where they were erected into the interior of the anchorages and towers with floating cranes.

In order to make a proper, new technologies have been investigated for the proper maintenance and long life of the bridge. Among them the “air injection system dry”. This system protects the main cable corrosion
The system consists of injecting dry air into the main cables to maintain a constant humidity inside thereof. This is a revolutionary idea because the cost of periodic maintenance is avoided.

The towers and suspended structure coated with newly developed fluorine resin paint, which has high durability. This coating system, zinc-rich paint, put directly on the steel surface makes an important prevention work before the advancing corrosion.