The AEG Turbine Factory, one of the first companies to implement the transformations since 1870 placed the German industry on an international level, is one of the most significant buildings protorracionalismo, and the beginning, at that time, the Using architecture industrialized elements.

In 1907 Behrens, precursor of the ideas of Le Corbusier, Adolf Meyer, Jean Kramer, Walter Gropius and Mies van der Rohe, holds the post of artistic consultant AEG (Allgermaine Elektricitäts-Gesellschaft), and is responsible for shaping all products of this company, from the lamps to the radiators, industrial products, stationery, advertisements, posters and even workforce housing. He designed the corporate image of the company, a concept created by Behrens and later spread by his disciples, mainly Walter Gropius, concept for which is considered the first “industrial designer” of history. In 1909 he dedicated to his best work, industrial building, designing and carrying out the construction of the turbine factory, whose ground rectangular modular and subsequently drew for the construction of other industrial designs. The German protorracionalismo style securities that were charged an advance of almost every cultural and political approaches of rationalism.

Designed between 1908-1910 for Elektricitäts Allgemeine Gesesells (AEG), electric company founded in 1883 by Emil Rathenau, the Turbine Factory was strategically located at the southern end of the existing complex, along the streets and Berlichingenstrasse Huttenstraße as demonstration the world tycoon prosperity. Accompanying these expectations Behrens built a steel and glass building in tune with traditional Greek and Egyptian temples, with the intention of glorifying the power industry.

Later the plant became the company Siemens AG, which operates as a gas turbine plant, continuing the manufacture of the product for which the building was originally built.

The built Turbine Factory by Peter Behrens is located northwest of the center of Berlin, Germany, in Ironworks Road 12-16 Berlin-Moabit district to about 3 km from Reichstag. You can reach the underground line U9, getting off at the station Turmstrasse and walking down the avenue of the same name 1 kilometer to the west. 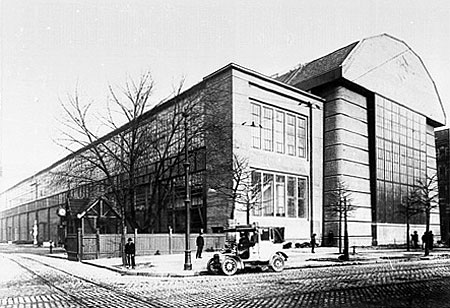 As opposed to the “materialism”, Behrens focused his design on the belief strength of the artist and art to transform the brutality of daily life in a dignified existence.

Similar to the transformation of a lump of coal under extreme circumstances a diamond praised, daily life, and in this case the industry, factory and machinery could be transformed by the “Kunstwollen” (intention) of the artist in an entity high culture.
As an ideological position, applied to industry, these thoughts appear in a number of aesthetic and symbolic themes clearly reflected in the Turbine Factory. Far from the main concerns characteristics of this type of construction such as materials, techniques or functional purposes, the factory was the result, the specific realization of selected industrial features filtered through the mind of an artist.

The result was a large glass wall symbolizing the victory of art over the banality of life in an emerging industrial society. While the fact of industrial progress could not be ignored, at least kept a record of the artist does not necessarily succumb helplessly about. It is largely due to the thought that the first industrial building Behrens was unprecedented in architecture or industrial design.

What makes the meaning and importance of the AEG Turbine Factory has transpired, apart from the actual achievements, is the message that cultural norms established so far must be transformed into a process of assimilation of modern industry.

In an article on the AEG Turbine Factory written by Behrens in 1910, makes clear his intentions in the design of it:

“The key architectural idea in the design of the main nave group consisted of steel components, not desperdigarlos, as is characteristic of regular triangular building. Thus the interior volume is contained on all sides within a closed flat and smooth, in order to achieve clarity of architectural proportions ” 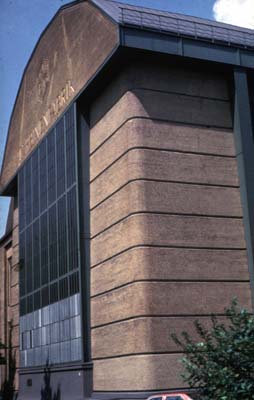 In aesthetic terms the main conflict Behrens he faced in the design of the factory was the tectonic nature of the wide glass and metal wall proposed by your engineer Karl Bernhard, as a solution needed to master the great structure and comply with the concept of Stereotomie that since the construction of the pavilions of the Exhibition of Art in northwest German Oldenburg defended Behrens.

The challenge was, therefore, to find a solution that was flexible enough to adapt to the dictates of a particular technology, including the use of certain products for the construction, while preserving the architecture as a symbol to set the values culture of a modern capitalist state. The culmination of this process of synthesis is expressed on the facade triumphant, “temple like” factory with central crystal window staggering proportions that only advanced technology could have given.

The timing between the steel and glass, the details of the rivets of the uprights, and expressive articulations supporting cast which supports image linking energy with cold rationality imposing.
With his limited knowledge of any type of building technology, Behrens had to have the support of an engineer for a building as large and technically complex. The shift in priorities between ideology and technology in the design of the building necessarily translate into a number of ambiguities and concessions from Behrens in his forced collaboration with Bernhard.

The vessel was originally formed by a rectangular of 207 meters long, 39 wide and 25 feet high, flanked by two orders a body formed by a skeleton with 22 main frames placed every 9 meters, being considered in conjunction with the architect’s work, the first comprehensive industrial design history. The 22 main frames not only support the roof and building envelope but also lane two 50-ton cranes. The ship was divided into a basement, ground floor and first floor.

The calculations and planning plant were made by the civil engineer Charles Bernhard. Located on a corner and has a slight rotation relative to Turmstrasse Avenue as it follows the line of the street Berlichingenstrasse, accentuating her figure rotation and increases its scale.

In 1939 was extended north 247 meters, renovation made by the architects Jacob Schallenberg and Paul Schmidt. 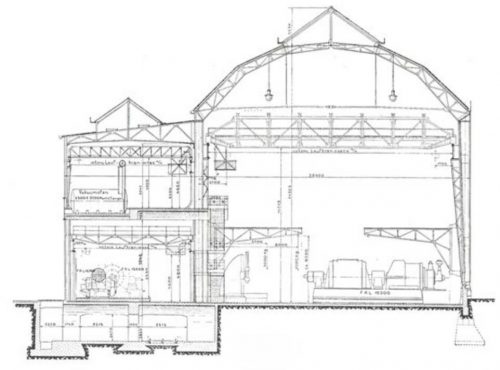 Triarticulada metal structure, porches, consists basically of a three-hinged arch reinforced with a cross beam, is a regular rhythm, and is visible from the outside, especially in relation to the studs, which are arranged between large aventanamientos. Longest half arc rises vertically to the second hinge and then breaks into three facets before reaching the third hinge at the apex of the arc. Structural properly speaking, there was no reason to break the second arm segments, was an aesthetic and artistic Behrens.

Using technology to ambitious, Behrens hides the fact that the factory structural system consists of a series of hinged arches, leveling the building with a ledge which cuts voluminous on top as vertical element. Thus, the visual impression created Behrens of a lintel in which the vertical elements of the arcs represent the columns of a classical temple. In the elevations of the long sides is achieved a contrast between the strength of the structural supports and the quality fragile glass panels of the enclosure. The entire deck is glass and rests on a metal trusses arcs mode discharging directly on the outer walls

When you reach the corner, a shot glass wall interrupted and materializes the wall which strengthens the contrast curve edge between the wall structure and glazed skin. The cover follows the contour of the upper broken porches.

On the facade, Behrens makes a pediment with broken profile. Under it a large window, and in the corners solid cloths, downgraded, creating an overhang. It gives the character of the work only constructive and functional values, but follows the idea that “the artistic value of the work is determined by the representation of the ideal of functionality.”

The building is distinguished fundamentally by the scale and the careful use of materials, the relationship between structure and closing is absolutely maintained. With its contradictions and its classicism, marks the evolution in contemporary architecture of this sector typological and represents the paradigm of any rationalist industrial building period that begins with the Faguswerk ​​of Walter Gropius.

In its construction were mainly used glass and steel, with three prong masonry metal arches.

Although within a powerful symbolism, Behrens technology gives the opportunity to express not only allegorically through large-scale industrial materials, but also in the strong evocation of the dominant role of the machine society, in detail memorable building, such as giant hinges inserting bases arcs with concrete pedestals.