The complex ADGB School Association, conducted by the Hannes Meyer and Hans Wittwer between 1928-1930 is the largest construction project after the Bauhaus in Dessau and one of its most prominent buildings. Hannes Meyer was commissioned for the project shortly after his appointment as the new director of the Bauhaus in late April 1928.

During the government of East Germany, the building was off limits allowed the public and surrounded by a security fence. Survival of it was unknown in the West until the fall of the Berlin Wall in 1989, when the architectural historians discovered that most of the building remained intact.

The building of the Trade Union School was threatened to be demolished and rebuilt again, but in 2001 the Province of Brandenburg, who owns the place and Handwerkskammer Berlin, chamber of crafts, came together to reopen as the School of Crafts.
It was restored to its original state by architects Winfried Brenne and Franz Jaschke, work for which they were awarded the World Monuments Fund / Knoll Modernism Prize in 2008.

The school was built occupying part of a wooded area of 48,562 m2, on the Fritz-Heckert-Straße Bernau near Berlin, Germany.

The aim of the School of the German Trade Union Federation was to provide more education administrators and leaders of the labor movement on topics such as economics, management, labor law and industrial hygiene.

Its design is still considered as a paradigmatic example of the functional architecture. The architectural style of the school built for union officials, corresponds to an industrial plant in which it dispenses entirely superfluous details.

The expert on issues related to the Bauhaus, Winfried Nerdinger, described the project as “a masterpiece of poetic functionalism”. In addition to its apparent and unique qualities, the isolated school in the nearby forests Berlin has not been released to the public until after his recovery. 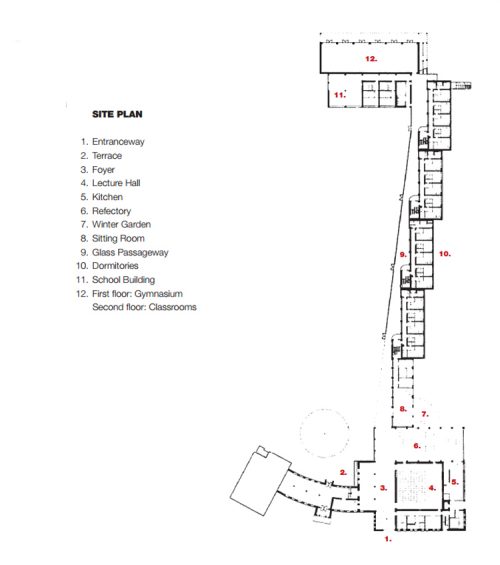 It was necessary to develop space to accommodate, feed and provide sports facilities for about 120 people.
Like the Bauhaus in Dessau, in Walter Gropius, only from the air you can see the entire complex consists of several related but structurally separate buildings that form a “Z”.

The two sides of the complex are connected by five volumes withdrawn from each other, which house dormitories. A long corridor with a glass facade flanking the bedroom area and connects classrooms, library and gym, a dining room whose ceiling is also made of glass and an auditorium.

Near the Meyer and Wittwer structure erected a row with four residences for teachers. 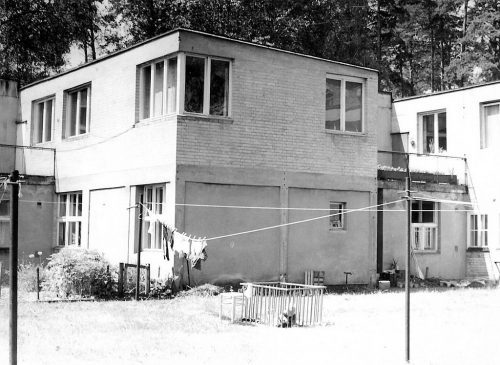 In the words of Meyer himself, won the tender for the project, not only because he designed a remarkable set of buildings, but also because it introduced a new form of socio-educational organization for the center. One hundred and twenty male and female students were accommodated in rooms equipped to accommodate ten members each, distributed in four blocks with three floors each, thus establishing a space diagram for social relations.
The purpose of this rigid assembly was to give the worker during his relatively short stay, the opportunity to identify with the community life of the school as quickly as possible creating a certain camaraderie with his roommate and life of cells.

The modulations of this system correspond to the sociofuncional differentiation, being different building block in single rooms or apartments for teachers. The gym and other public spaces are distinguished and develop outside the basic system construction.

The homes of teachers constitute a separate wing. Were simple two-storey houses.

The movement within the building is contained and represented by glazed corridors that allow natural light and leave observe the outside. These passages seem grafted, almost as a retrofit on the number of units built.
Construction procedures and sequences are revealed everywhere, in contrast, for example, with the building of School Bauhaus in Dessau, whose constructive disjunctions were performed by cosmetic decree. In general, the organization of the building is just a plastic translation of the socio-pedagogical functions, a direct transcription of a functional diagram. 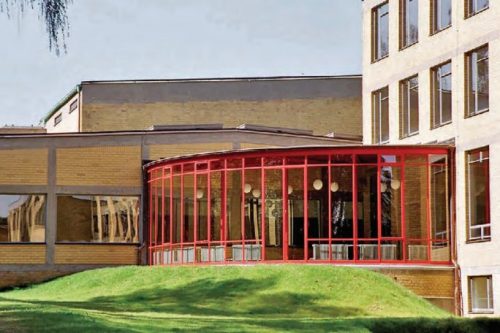 The winter garden made of steel and glass and curved lines whose delicate countered with the more rigid and angular of the bedrooms was replaced after the war by a masonry structure. During the restoration by Brenne Gesellschaft von Architekten, the original state is restored.

The project reflects a functionalist vision of architecture, though extremely sensitive use of color and materials, including steel, concrete, glass blocks, articulated steel trapezoidal windows frames, sophisticated mechanical systems and perimeter walls made yellow bricks. The metal frames were painted red in some areas.

When after the Second World War the Union of East Germany took over the building to educate its members, made significant changes, and made important changes and additions: a parapet wood replaced the glass in the outer hall, a roof concealed suspended glass blocks dining and trapezoidal windows of the stairs were walled with concrete. These changes, together with others made to the original design did unrecognizable.

To accommodate the codes of modern building, the entrance hall to school had to be reinterpreted during restoration by architect Winfried Brenne and Franz Jaschke. The choice made by architects reflects the materials and color palette of the original design.