Academy of Sciences in California

The Academy of Sciences in California is the most current museum by Renzo Piano, which delivers an enlightened and sustainable solution to a building designed in the year 1934 with an avant-garde design.

Nearly 10 years of work and $500 million were invested in this building, a masterpiece of sustainable architecture, which blends perfectly with the natural sights of the park and technical innovation more in line with biodiversity and respect of nature, values close to the dissemination of science.

Sustainability is the highlight of this project, so much so that it is one of ten green pilots of the Department of the Environment in San Francisco. Designed and built as the greenest building in the world, Piano was posited to win the Academy Award LEED (Leadership in Energy and Environmental Design) for the best design.

This commitment to sustainability extends from the facilities to bike lanes, vehicle recharging stations and solar energy panels on the ceiling.

The Academy is located in one of the green places of San Francisco, Goden Park, California, USA.

Evolution is a central concept of modern science, and as such, promoted by the Academy of Sciences, which recognizes the evolution as the foundation of understanding of biodiversity and as a founding principle of a scientific criticism. On this basis and its dissemination to the general public, the design by architect Renzo Piano was awarded the contract of this innovative and totally organic project, largely because he shared the belief concept.

The museum consists of very unique areas such as an aquarium, a planetarium and a reserve green on the inside, in addition to the various exhibition galleries, which, unlike traditional galleries, were designed for receiving large amount of natural light.

One of the most important features of the building highlighted some huge water tanks, which will house the museum’s sharks and other creatures of the deep. An elevator will allow the public to walk through and below these huge tanks.

The Academy is home to species of northern California and Philippine coral reefs.

The exhibition halls will have access to a portion of the roof, thus creating spaces for outdoor exhibition.

It includes exhibits on the evolution of species in Madagascar and the Galapagos Islands, and the effects of climate change on California. There is also a section devoted to Africa.

Without a doubt, one of the things most striking is the huge green roof of about 100,000 square meters, from where large domes rise, randomly also lined with green. These domes are large spaces, such as the planetarium or the reserve which houses a green tropical forest and comes from inside the building.

The entire roof of the building, which is a hilly area of 10,000 square meters in tribute to the hills of San Francisco, is covered with 1.7 million native plants, will crown a public space of 112,000 square meters. This “living roof” serves to keep cool the interior of the building and at once to collect some 13 million liters of water a year to be re-used, largely by the museum. It also has 60,000 photovoltaic cells to generate energy and solar panels to produce hot water. The properties of thermal insulation will reduce the use of air conditioning.

The museum has safe spaces for bicycles and parking facilities for recharging electric vehicles.

The building, with an exceptionally contoured roof, is unique in the world. Much of the technology used for its construction has not even been tested or examined, including coral tanks deeper than ever constructed.

To achieve the sinuous forms of the roof, a structure of bent steel beams was used to support the “pits” that contain all the organic material necessary for the living vegetation planted on the deck.

One of the most important considerations lies in the fact that the building and its tanks are located in a seismic zone and therefore had to be designed as earthquake-proof.

Much of the input energy comes from solar panels on the eaves above, and a remarkable wisdom of Piano was to use native vegetation for the green roof, so to minimize the consumption of water in irrigation.

For the rest, this building consumes between 30 to 35% less energy than required by law. 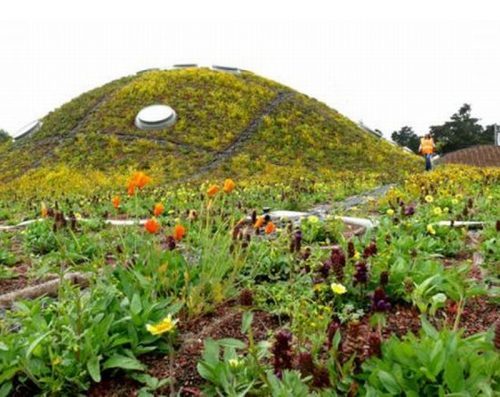 Native vegetation for the green roof

Native species do not require water for irrigation.

About 1.7 million species live on the green roof.

This installation of native plant species is known to many animals like birds, butterflies and insects along with some fruits and flowers.

Heat by radiant slab reduces the need for energy by 5-10%.

The green roof creates thermal insulation, which makes it unnecessary to resort to air conditioning systems.

High-efficiency glass was used throughout the building.

To keep the museum pieces in the moisture content required, it uses a system of moisture by reverse osmosis.

90% of the spaces have natural light and outdoor views.

The undulating line of sky allows ventilation to the central square, which disperses the cool air into the exhibition spaces.

The skylights are placed strategically so as to illuminate the forest reserve and the aquarium.

Automated windows are opened and closed to allow the entry of cold air as the temperature inside fluctuates.

Light sensors are activated according to the amount of sunlight optimize artificial light.

The eave perimeter contains 60,000 photovoltaic cells capable of producing 213,000 kilowatts per year (at least 5% of the total requirement). This prevents a large quantity of carbon dioxide emissions annually.

The multi-crystalline cells are the most efficient on the market.

Sensors in health facilities allow the filling of ponds as agreed to each use.

To operate the sanitary equipment, reclaimed water from the city of San Francisco is used.

The saltwater for the aquarium will be carried from the Pacific Ocean.

At least 50% of the timber was planted in a sustainable manner and certified by the Forest Stewardship Council.

The recycled steel was used 100% by the building structure.

The insulation of the walls of the building was based on recycled denim jeans.

The concrete has a composition from industrial waste.

At least 20% of local materials were worked within a few miles of the building, strengthening local industry and reducing emissions by means for transport of materials.