The Academy of Art in Berlin (Akademie der Künste) founded in 1696 took his place on Pariser Platz between the years 1907-1937. In 1937 the Nationalists came to power and evacuated the building to locate the offices of the Chief Inspector of the Reich buildings in the capital of Germany. In 1950 restored the Academy of Arts but was unable to do so at their old location because the property was badly damaged during the war and later demolished by the East German government, except for its rear building.
After the construction of the Berlin Wall, near the Brandenburg Gate, the border troops of the GDR moved to part of his regiment to the spaces of the Academy, including locating a prison for those trying to cross the wall and were detected. Finally, in 2005, after a major renovation in the building left standing and that a new structure was built, the Akademie der Künste could return to its original location.

The motivation behind the new design was very different from what is hidden behind the design of neighboring buildings. While most people do not have access to banks and embassies around the square, if you have the Academy, which is intended to be part of public life. The historic ruins of the rooms in 1906, were renovated and integrated into the new building and are visible from the lobby. Behnisch has created a glass bell multilayer seem to float on space. Arranged around five historic rooms multilevel bridges, a “platform for office,” small patios, a platform for exhibition of sculptures and the plenary assembly room facing the Pariser Platz.

After a period of approximately 70 years, the Akademie der Künste Berlin, Germany, regains its historic location on Pariser Platz 4, next to the Brandenburg Gate. It is located in a small, narrow 36m wide by 80m long which is located at the southeast corner of the square, one of the closest elevations facing the Pariser Platz plot. Traverses the building site and out the other side to Behrenstrabe compared to Holocaust Monument of Peter Eisenman.

In the words of Günter Behnisch and Manfred Sabatke of Behnisch & Partner, the project is extremely interesting, although not present technical difficulties provides intellectual and artistic challenges. Due to regulations issued by the planning office of the city of Berlin, aesthetic and formal issues complicate the design solution. The manner in which the Academy wishes to be represented with its building in the city, and specifically in the Pariser Platz, in contrast to the formal rules of regulation in the planning of the city, this has been one of the most interesting challenges of this project.

In this controversial location where the philosophy of reconstruction remains its most rigid rules and regulations is where the new building has found its clearest expression, between the stone facades of other buildings in the square. The new Academy building is a clear exception, standing out as an exclamation which proclaims freedom of the arts.

The old building and the new one in the front are connected by flights of stairs, ladders and bridges that offer visitors a lot of different views and surprising perspectives. The new building fits the shape of the site. Here is where she reveals her “face”, closing the facade of the Academy facing the square with a special facade.

The bottom, steeper than the top, offers direct views of the interior bright and hosts the plenary hall at a higher level and a bright and open patio with elements of the old building, a hall, a café, counters busy information and exhibition space. From the perspective of passersby, the large space on the ground floor seems to stretch on the outside, but actually ends at the building line.
The Academy hosts a range of cultural events, exhibitions, concerts, readings, dance performances, film screenings, besides granting the annual award of Arts in Berlin.

To facilitate access to the building is deliberately avoided any threshold, leads directly to the large lobby which is in turn the big plant, the large space, the Art Academy. On the left side of the lobby, an elegant flight of shallow steps attracts visitors to make their way across a bridge into the depths full of light the building, where the winter garden is located. On the same side of the lifts to the upper floors, facing the library is located.
The large entrance hall rises to the roof of the building hanging glass, sloping levels and mirrored walls that challenge traditional views. Elegant roads and bridges appear seemingly random set at different angles of the enclosure. 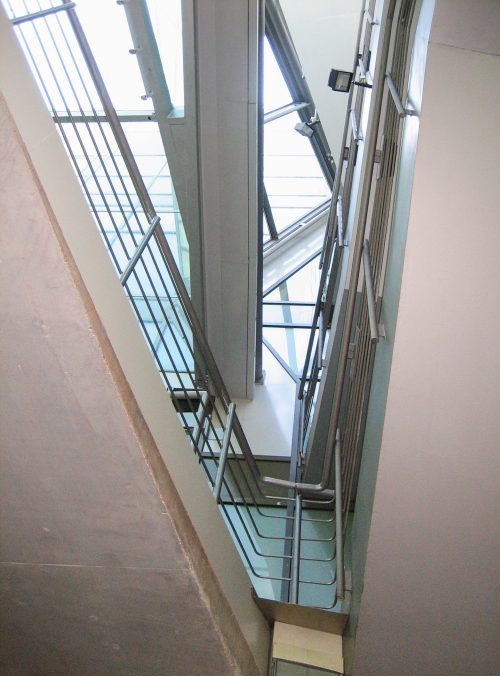 Once past one corner of the hall tower stairs, counterpart of the historic staircase preserved known as the Ihne tower is inserted, the visitor is guided through a corridor with a soft, flat concrete roof seen a spectacular space covered with a roof angled and bent glass. 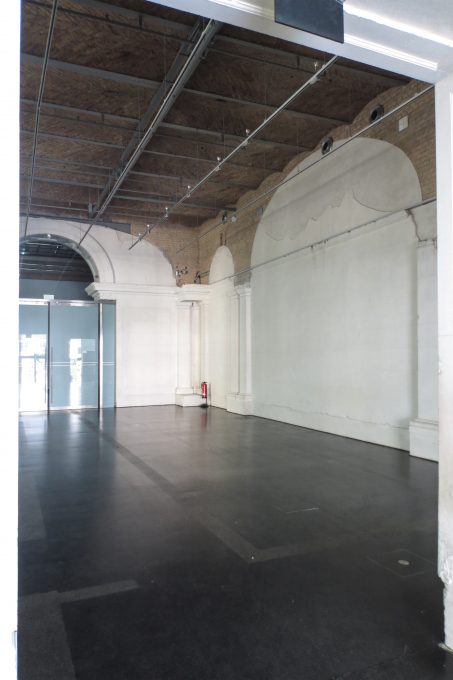 If you go straight you reach the five bedrooms with skylights restored. Arranged one after another, these exhibition spaces have white walls that give them a neutral character. “… The old building is in the heart of the design…,” says the architect and historian Werner Durth. It was he who persuaded Günter Behnisch of the need to preserve the traces of history.

The hall “Throne” dating from 1906, now renamed Max-Liebermann in honor of former president of the Academy during the Weimar Republic, with its semi-window Bow, forms the prelude to the four historic rooms skylights that follow. Traces of the past are in the form of the remains of stucco ceiling in sight whose old iron frames have been straightened and refurbished glasses skylights, pilasters and cornices and the lines on the floor indicating where were the facilities for the troops of the GDR.

On the roof of the throne room extends the terrace of the lower court, creating a peaceful place conducive to sculpture exhibition, or for creative outdoor stays watching “Le Cupole doppio del mondo” Leonardo Mossi.

A covered walk 100 meters through the building from the Pariser Platz through the entire length of the building to the Memorial to the Murdered Jews of Europe during the war, on the other hand, on Behrenstrasse. This public passage offers a marked contrast to the airtight buildings on Pariser Platz.
Moving through the gallery, you can admire beautiful works of art hanging on the outside walls of the historic rooms that have been carefully adapted for display purposes. Down the hall is the “Prometheus” sculpture by Reinhold Begas, walled up in the old Academy building after the Second World War and rediscovered during construction work.

In the basement where the heating machine, has created an additional room for submitting files and other documents that require protection from ultra violet light. Contemplating future expansion a large underground room known as “the black box” was also created.

The first floor of the front of the building on Pariser Platz, contains the public library, which can boast of being one of the most spectacular reading rooms Berlin. Visitors can sit at tables next to the glass to study the many books within the library files.
The gateways, which form the “seam” between the old and the new building provide access to a quiet inner courtyard and sculpture garden at the back, which opens to the south-shaped stepped platform and seems to float above the roof the conservatory.

The whole section of the building on Behrenstrasse was originally designed to house the archives and library. However, this part of the building was sold to the Fundus Group and now houses the exclusive China Club.

The centerpiece of the Academy, the Assembly Hall, located on the third floor. Meets all technical requirements of a conference room. Again, the positioning of the room overlooking the square was intentional. Virtually all glass front can be opened by sliding doors, becoming an auditorium at the Pariser Platz. 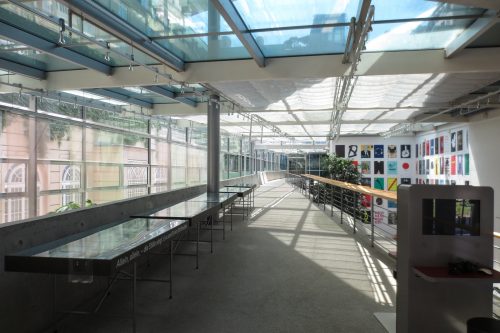 Above the Plenary Hall, the office of President of the Academy is located, with glass walls and wooden furniture in bright, deliberately designed to be transparent and accessible communication.

The terrace spans the entire width of the building, overlooking Pariser Platz, out of the club room and covered, as a porch with a roof of ocher and stamping.

The dividing wall on the west side, which separates the Academy of DZ Bank, has been used as back wall of the so-called “platform offices,” a broker with 60m long and 3m high lighted windows on the roof and distributed in compact rooms with walls of transparent or opaque glass.

The building is a work primarily with glass, steel, concrete and stone. The colors and shades chosen by Chistian Kandzia enhance the light and bright atmosphere of the building.

The light-filled atmosphere is misleading because it hides the enormous structural load placed on very heavy, 6cm inches thick glass panels needed to provide protection from heat and sun. 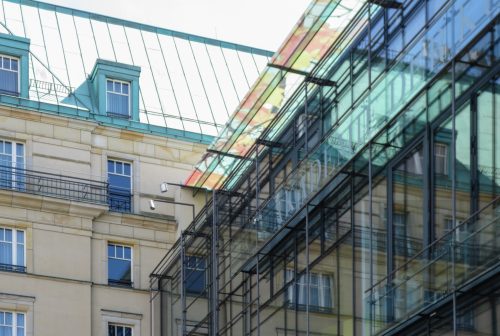 A challenging Günter Behnisch said “… I’ll never build a stone building anywhere, much less here, where every stone has a sad story to tell…” The. architect finally triumphed in the battle over its glass building on Pariser Platz, after a tough battle with political organs, including over construction work dropped the original plan to print on glass images of the original facade.

Behnisch was worried that a simple decoration glass panels in combination with the sculptural effect of the structures behind the facade create too artisan printing. Finally the facade was covered with large panels of stained glass in dark tones. The light management of the planned day and invigorating view of the interior at night are crucial to ensure that the building is able to transmit its appeal at all times.

The stairs, with its many angles, leading to different levels covered with woods and groups of colored seats where visitors can relax.
In the historic rooms all equipment and facilities required have been placed behind walls to avoid any interference with exhibitions of works of art.

The roof top of the building where the club is located, is made of laminated glass printed with colored pictures of maple leaves as a reminder of the trees that once had the property. It is designed to evoke associations with a porch that can be seen from the square.

Using the most advanced technology is virtually invisible in the building. The ventilation, heating, cooling, electrical and lighting are integrated into the floor slabs of 35cm thick.
A geothermal system is used for cooling, as a substitute for air conditioning. The fluid in the tubes hidden in the roof is cooled by ground water at a depth of 16m, which ensures convenient temperatures