The House Aatrial is an interesting project by KWK PROMES, the architect Robert Konieczny. The residence built near a forest of Lower Silesia has an area of ​​660 square meters and is known for its modern design and the large number of terraces available, necessary to absorb all the natural beauty that surrounds it. His apparent simple geometric shape, resulting from the various transformations of a cube make your outdoor seem modest, but the huge windows enclose a modern interior design and a refined decor.

This house was nominated for the Mies van der Rohe Award 2006, awarded as House of the Year on the same date, awarded the Grand Prix Leonardo 2007 and the International Architecture Award 2008. He also earned recognition WAF 2008.

This modern and elegant house is located in Poland near Opole, a city south of the country, Lower Silesia, on the banks of the Oder River. Most settlements in the environment with low density are formed by “houses – cube”, typical of the 1970s in the region constructions. 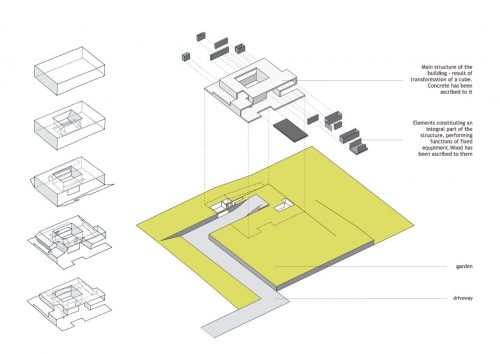 The land of one hectare and near the forest, on which was built the Aatrial House has a weak point, its southwestern access, a conflict between the driveway and garden. To fix was thought to lower the level of the driveway, sinking into the ground and away from the garden. A consequence of this proposal came another idea, a way to enter the ground floor, from the bottom, an idea that was possible thanks to the creation of an inner court until reaching the path of the car.

The result of the new idea materialized in a building that is open to all sides by terraces, unrestricted, and whose garden can only be accessed through the courtyard and house.

This development has also brought about a new, reverse the classic building with atrium space model. Aatrial house is closed inward and open to the environment. 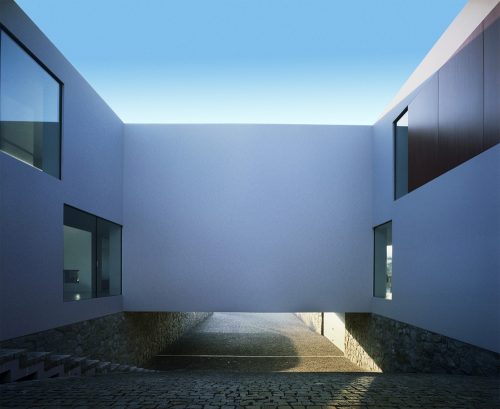 The entrance is at the highest point of the area sloping east side, access is supported by some stairs and to your left the two garage doors are located. The 10 meter wide steep driveway still inclined to the entrance. The ramp was lowered to reach the lower level of the house while the garden was partially raised in this area. As a result, the garden is separated from the driveway and the environment with a retaining wall 2.5 meters high.

In the center of the house is a courtyard where the cars are stored in the depot back to ground level surface. The design is fairly unique in this architectural feature. In this atrium born staircase leading to the main entrance.

The facade facing the garden combines large glass panels with other ebony, both framed by strips of concrete. This side of the house opens onto a concrete platform in the center comes a pool.

To blend with neighboring buildings, typical “home-cube” that emerged in the 70s, the structure of the house is the result of several transformations of a cube. As a result of stretching and the particular curvature of the surfaces of the cube, all walls, floors and ceilings were defined jointly and according to the interior courtyard and terraces.

The principle of the inner court in form, has not only created the structure of the house, but also defines the interior and exterior architecture, including the use of materials. The building is a concrete monolith, and concrete is both material finishes in the transformations of the cube, while all additional elements are made of dark ebony and glass. A metal ladder with rungs reinforced glass connects the two floors of the house.

The driveway and retaining walls were made with blocks of granite quarry, the characteristic material instead. In some areas of the fachas a stone base was performed.