During the month of September 2003, Kazakhstan, most of which were republics of the Soviet Union, hosted the first congress of leaders of world and traditional religions.
Following the success of the event the president, Nursultan Nazarbayev, decided to turn the event into a triennial event, and together with the decision taken to build a building that was headquarters of that competition sets comfortably to welcome it in its successive editions.

Even before finding the architect who carried out the project, this already has three conditions:

Finally it was the British architect Norman Foster who accepted the job despite the conditions. Probably to demonstrate the capability of their study to meet such strict deadlines in such harsh conditions and make a small step, why not, to a market in which seldom contain the name of a western architect.

The building is located on the east end of the axis responsible for acting as the backbone of the new development of the city.

Though currently separated from other buildings this situation will not remain for too long, since the area is in a fantastic period of expansion, with the foresight of the main axis continues to expand eastward and including the date of 2030 as target date for completion.

We have said that the pyramid-shaped building was imposed by the president. But Foster had to find a conceptual justification of the way of their future building, and there were two conclusions reached:

The pyramid was a symbolic form suitable for this project and that no religion (after the Egyptian) had adopted as its own symbol, and therefore a large number of religions would be willing to accept this form of the building and not offend anyone itself.

Moreover, the pyramid-shaped hierarchy diagram responded perfectly to the setting most of the religions of the world, where a single divine power and controls everything from above, below are those chosen few to bring his word to the underworld, and finally in the bottom of the pyramid, the people, the multitude of believers to the commands of their religion. So a pyramidal building could accommodate the functions required for this facility the same way and be fully justified.

From the outside the building appears as a square based pyramid 62x62m and 62m high.

In a first study of Foster project proposed lifting a building of equal size to the Great Pyramid of Keops, the largest of the Giza pyramids, 230 feet square by 146 feet. But these dimensions seemed excessive even to the ambitious president of Kazakhstan, so declined to reach the final dimensions.

From the beginning the pyramidal Foster liked to study, for them this shape is shown as an excellent organizational structure for the program that was raised, where the top was undoubtedly the most significant and thence to the base was losing meaning while earning surface so that the top floor was designed a space dedicated to meetings with leaders of a particular religion and a large floor space for more massive celebrations.

Once begun the design process the client instructed Foster to include a new use within the building, not something insignificant, but an operating room with capacity for 1500 people. The delivery date was still not the same.

What at first might seem a drawback on the march ended by giving strength and consistency to the project, resolving sensitive issues such as creating an entry point on a geometry as clear as that of the pyramid.

It was decided to bury the operating room under the street level, however the water table was critical and even after digging the room everything was above zero for five yards. It was decided to fill the field with artificial land to cover the room, creating in turn four lines of entry below the pyramidal volume. The artificial recharge also served as a pedestal for the pyramid, which was becoming even more so in an abstract object and pure, without any deformation by internal use.

Once inside the building foyer we have a main distribution from which we can climb to the base of the large atrium that echoes the outer pyramidal same proportions. This atrium is illuminated both by its foundations and the top, creating an interior space of very important dimensions naturally lit.

There are two vertical circulation cores that can go up through the different levels by both elevator and stairs. It is inclined cores.

Once the elevator deposited us at the last level we discover that we are still far from sores to the congress hall, and that we have yet to go before two helical ramps that ascend through a hanging garden dense, culminating a path of ascension can be compared to a thousand and one metaphor.

For if the metaphor of ascent was not clear enough to reach the upper meeting room we have a platform ephemeral subject to the main structure by only four points and bathed in natural light from all directions, since we only found as enclosures esceligrafiados large windows with peaceful purposes.

The engineers had to design the building to withstand expansion and contraction due to temperature variations of over 80 ° C, from -40 to above 40 ° C, leading to the expansion of the construction of up to 30cm.

Because of the speed with which the work was completed and also the extreme temperatures that can reach in Kazakhstan during the winter the pyramid structure was confirmed by steel instead of concrete as in the area of the basement.

At first it was thought that all the enclosures were made of glass, and these would be entrusted to the artist Brian Clarke, who had already worked with Foster on numerous occasions.
Finally, Clarke’s contribution was limited to the closings of the top of the pyramid and the other triangular spaces left to be filled structure is plugged with concrete panels on which was placed a gray granite tiling. 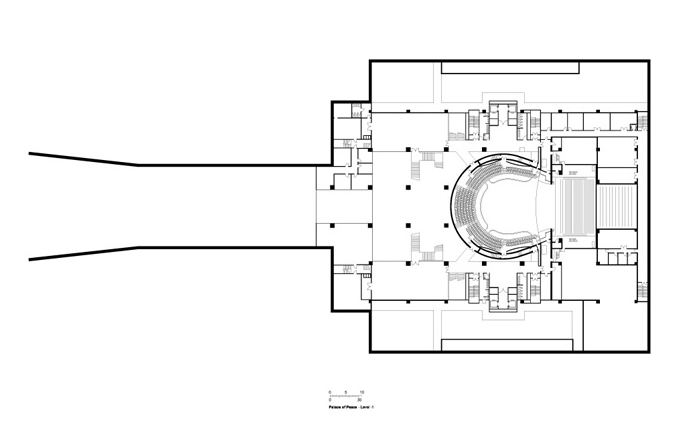 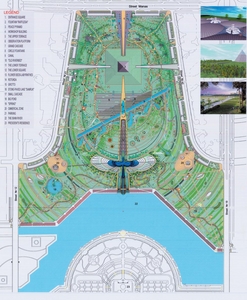 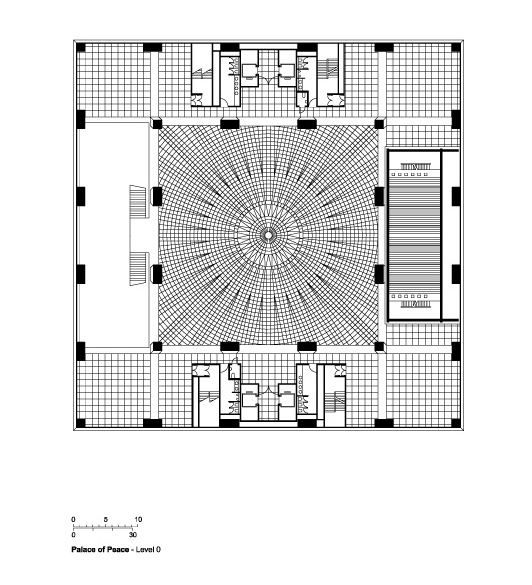 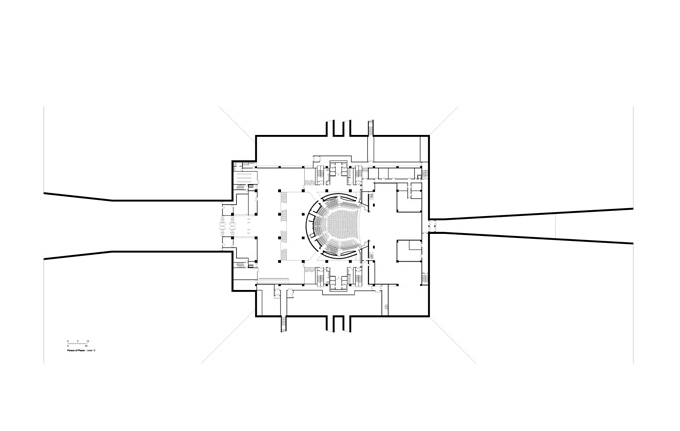 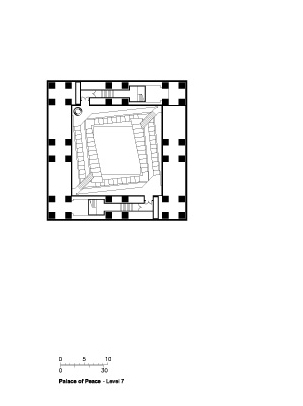 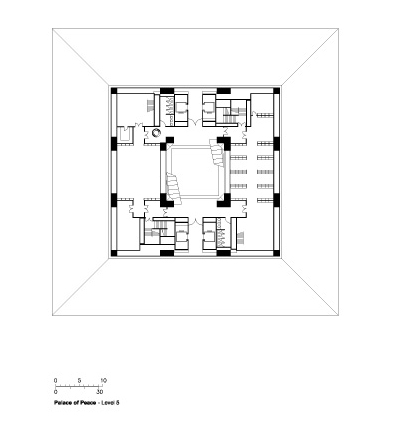 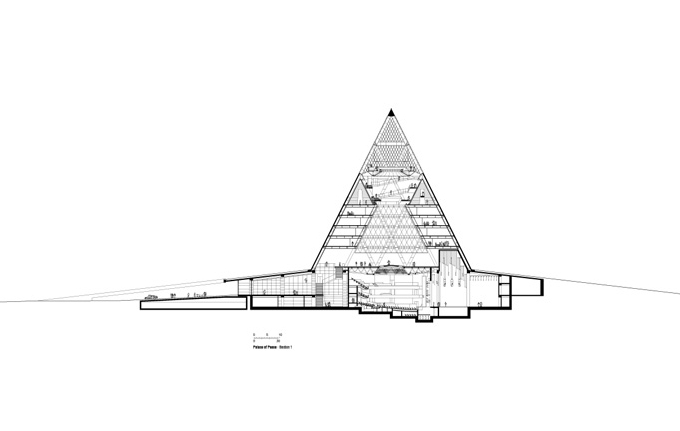 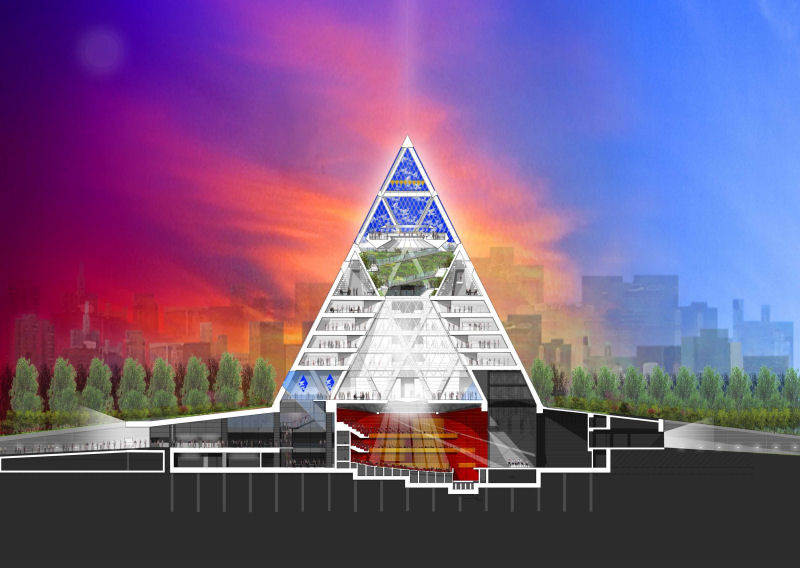 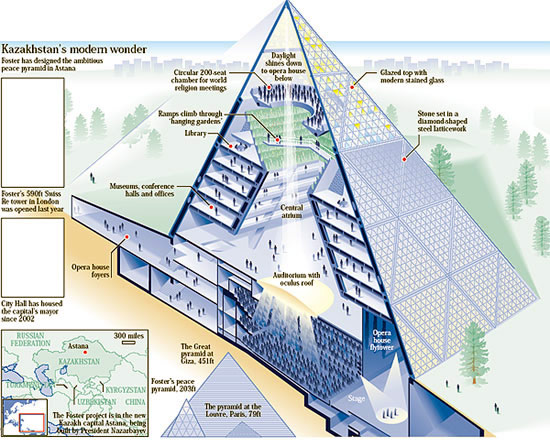 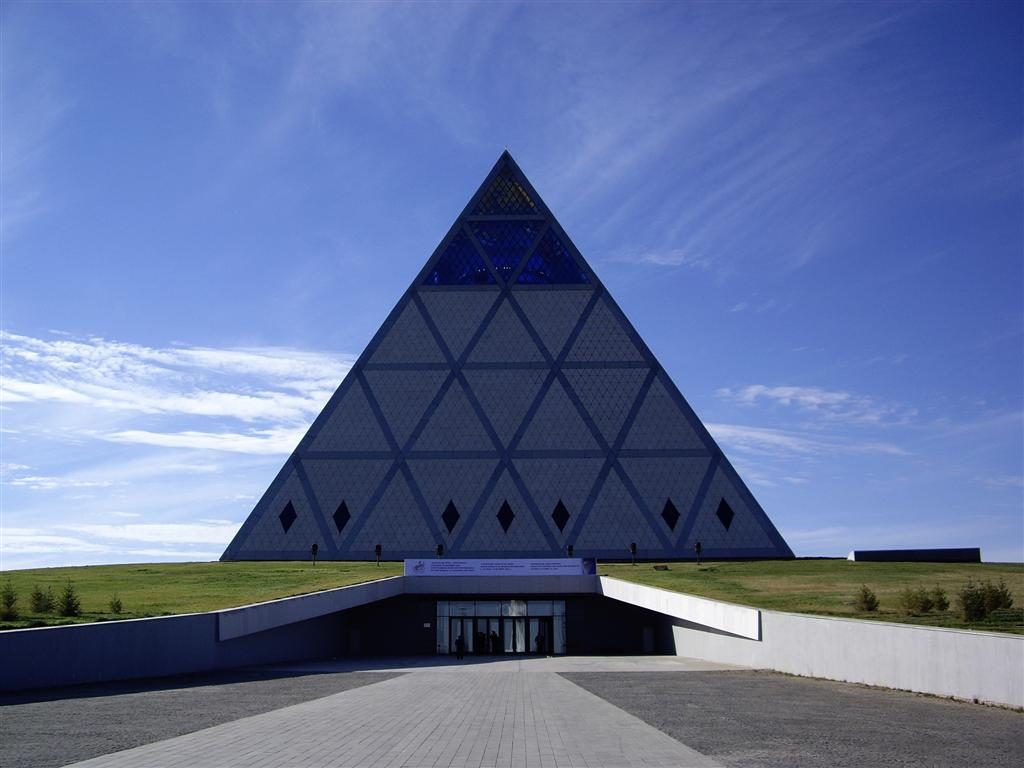 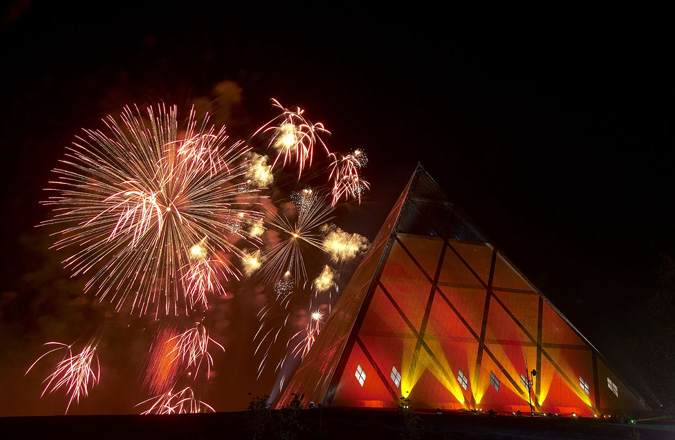 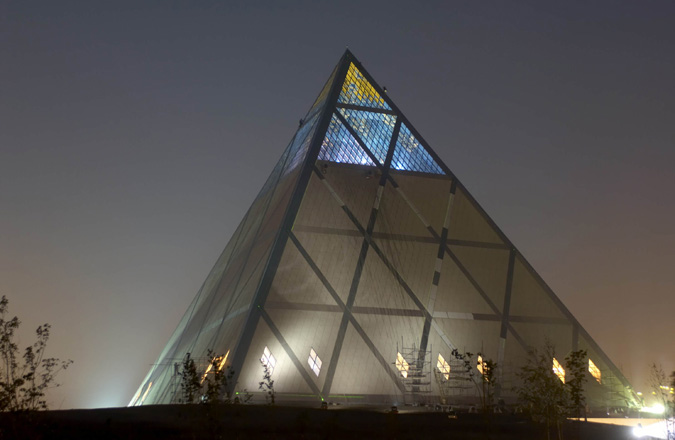 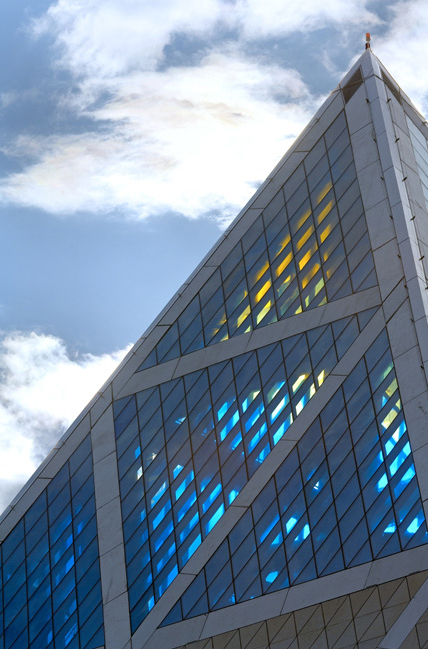 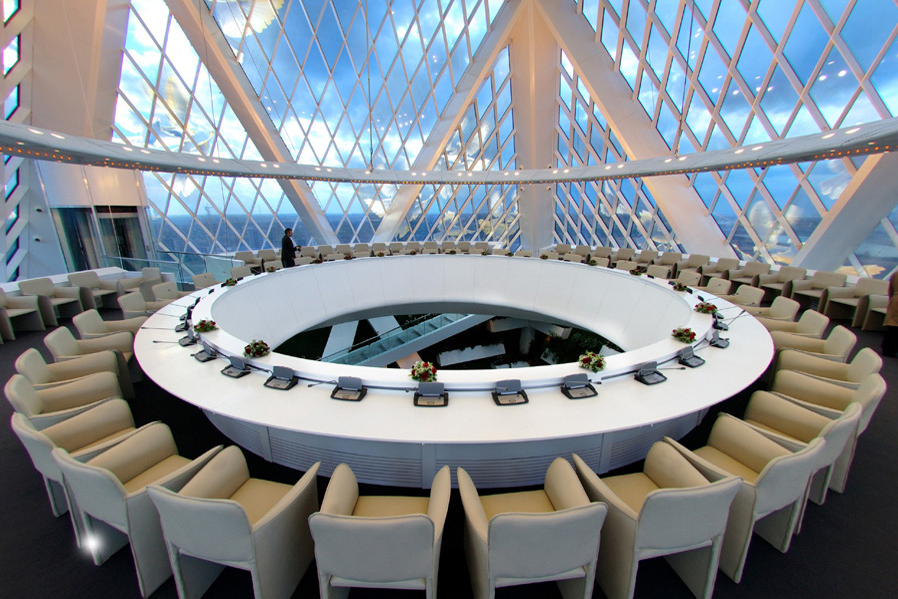 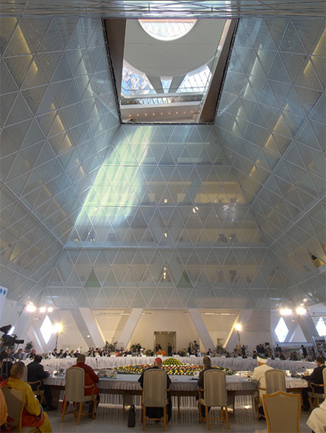 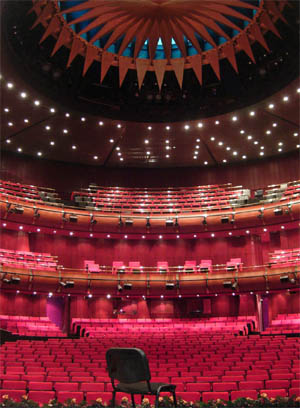 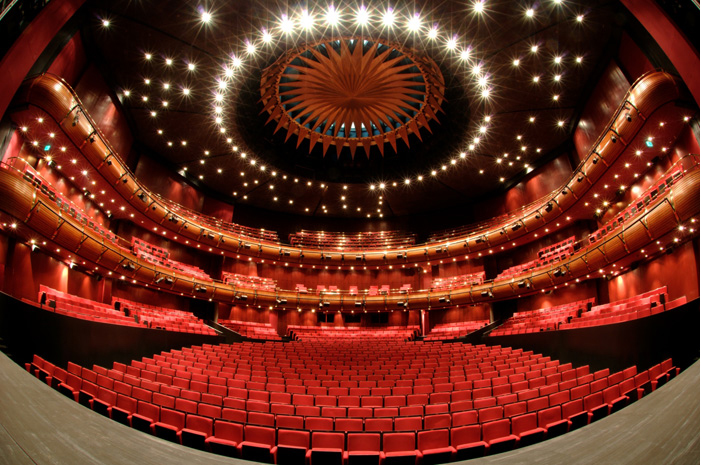 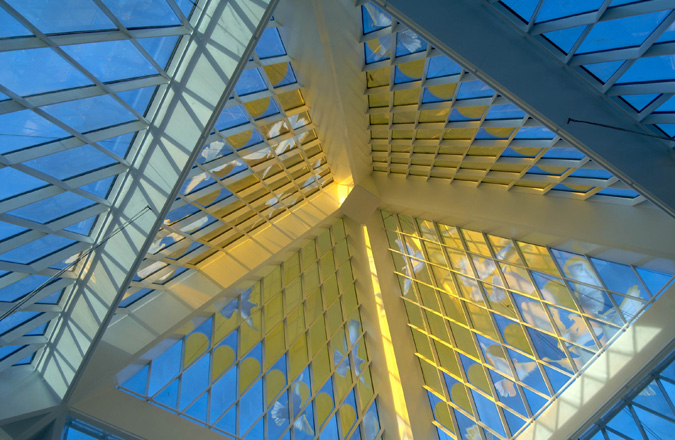 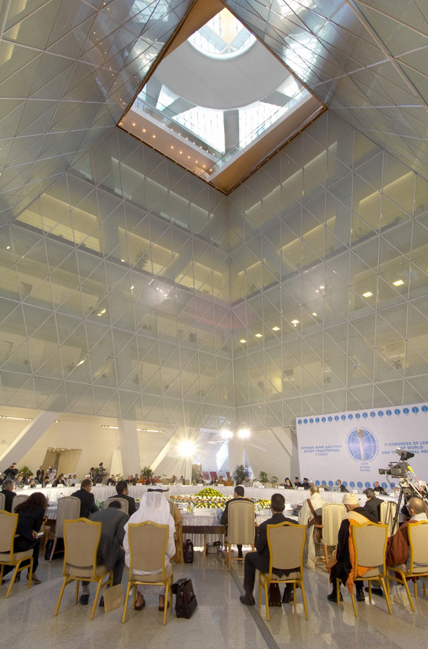 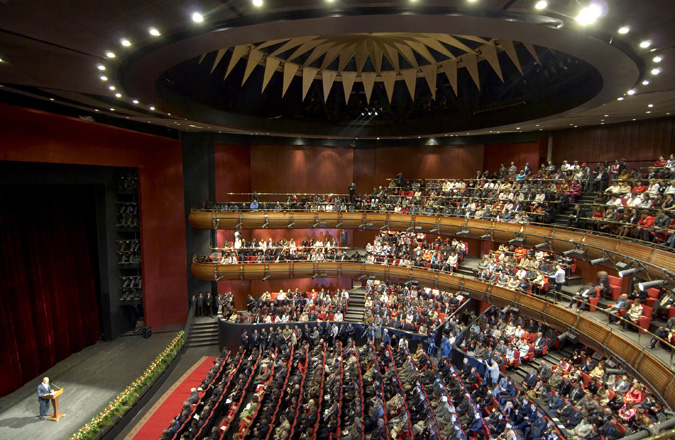 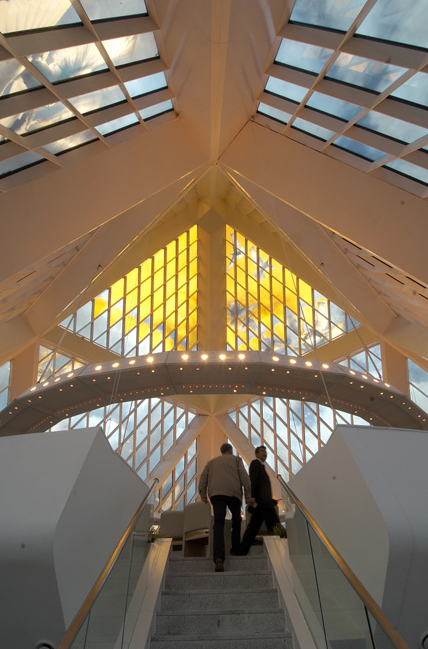 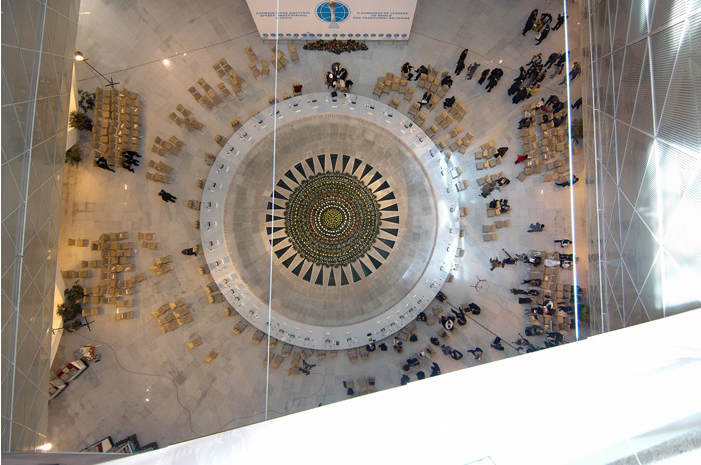 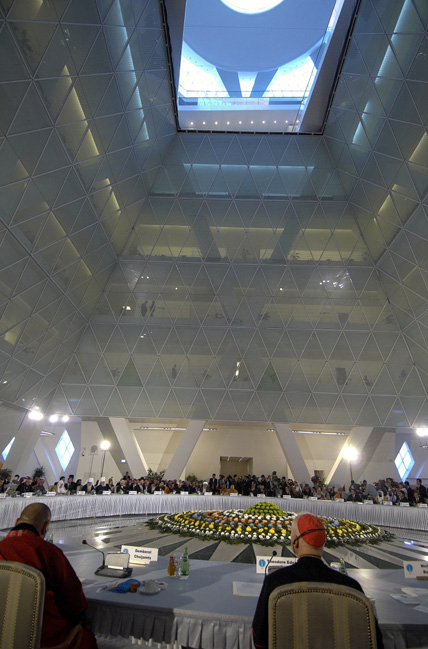 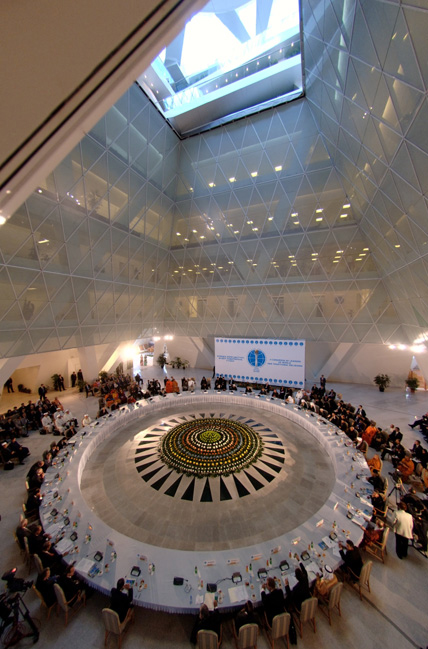 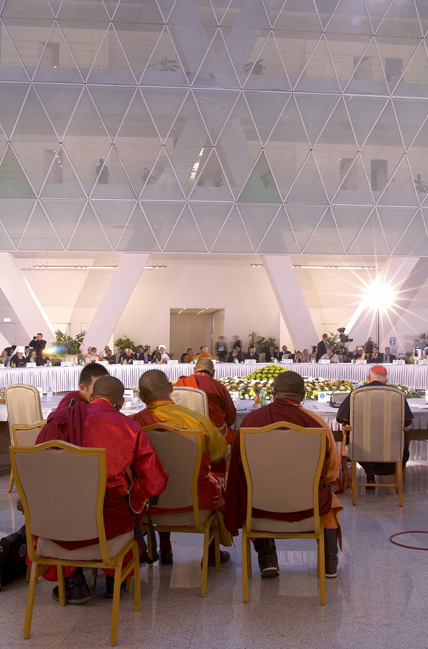 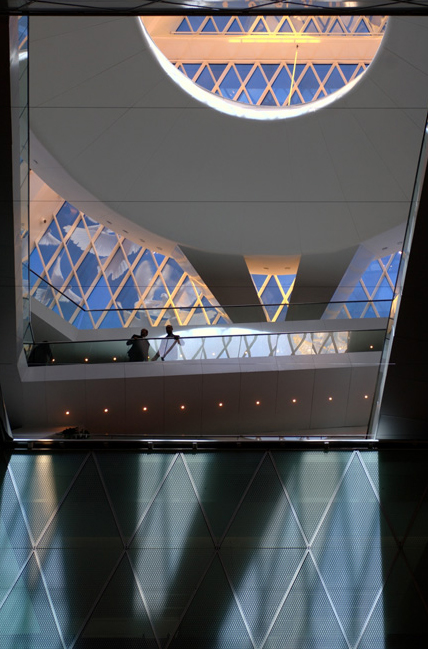 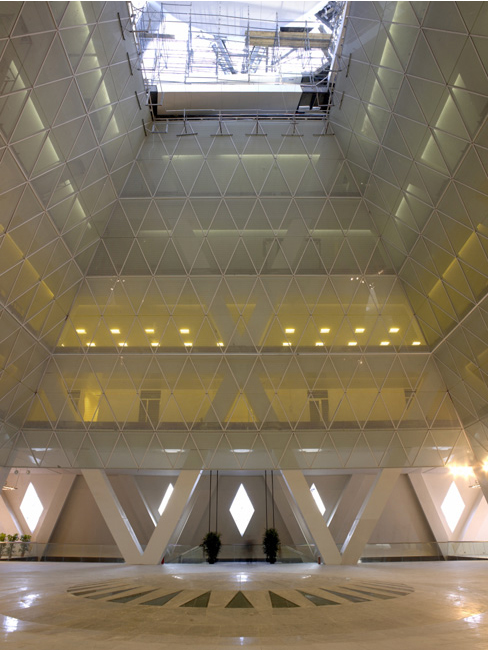 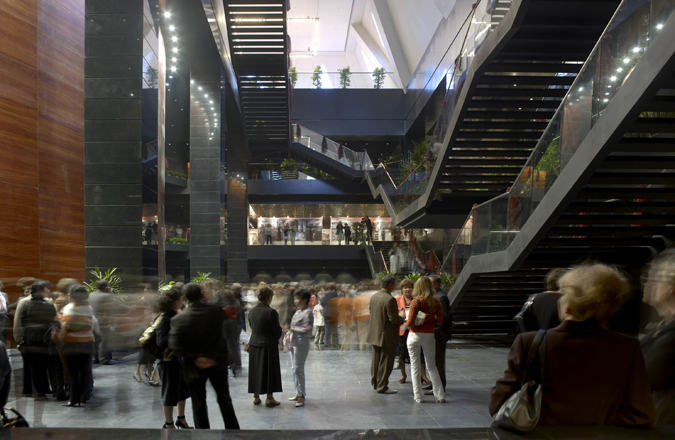