This residence apartment tower, with 23 floors, designed by Atelier Jean Nouvel and Beyer Blinder Belle was completed in 2010 and described by Nouvel as “a Vision Machine” a building offering a kaleidoscopic facade with a totally different structure of all one built around.

The project became an “instant landmark” as soon as they released the renderings and representations of the building.
Its design aims to offer the best of fine engineering and the latest technological advances in the design of a curtain wall ever constructed in the city of New York, a smooth curve, a bright mosaic close 1,700 colorless glass panels of different sizes, each set at a unique angle and mechanical torque, creating one of the most performance coatings meticulously tailored in a residential project in the entire country. The composition meets architectural standards De Stijl, reminiscent of Mondrian works, create a curtain wall of glass and metal curve of 76m height which is quite a show of force. According to Nouvel, “… The architecture expressed the pleasure of being exceptional in this strategic point in Manhattan… ” 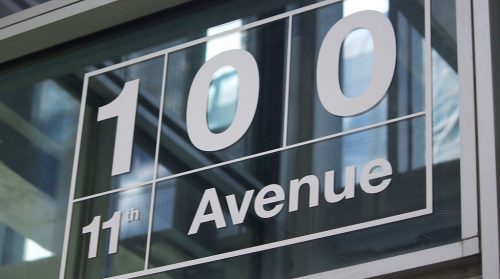 The building takes its name from the street numbering, which is located at 100 11th Avenue, corner 19th Street, in front IAC / Interactive Corporation, the first building designed by Frank Gehry in the city, north of Square One Jackson Square, in the far west of Chelsea, New York, USA.

Many apartments have views of the Hudson River. One of the points that the architect placed greater emphasis was to capture as much as possible these views. Chelsea is a neighborhood known for its variety of fine restaurants and art galleries, also for its vibrant nightlife, with many fun bars and nightclubs. Residents of Building 100 Eleventh Avenue are within walking a small distance of the Hudson River Park, Piers (Chelsea Piers) and the famous Chelsea Market, located a few blocks to the building. Chelsea Market was originally a biscuit factory which later became one of the most popular food markets in the city.

Some critics have argued that the design of the curtain wall that covers the building has been inspired by the renowned stained sections of XIII Gothic Cathedral in Sanit -Chapelle Paris, others in the cubic drawings of Mondrian.

Declaring that “… each new situation requires a new architecture… ” Jean Nouvel has ” ambushed ” the design of a conventional tower by creating a mass that covers the building along the whole curve tracing field. This gesture maximizes both the front facing the street and the view from inside the building, ensuring that all the residences at 100 11th Avenue have a full view to the south and west and all the light of day. From the smallest to the largest, each residence building enjoys a sweeping uninterrupted glass wall from floor to ceiling in the main facade.

The entrance to the building is on 19th Street and crossed the lobby once you enter. The dramatic lobby of 6.10m height, as the south facade draws the spaciousness.The building, with 72 apartments, offers private, indoor or outdoor terraces and a restaurant area outdoors in the lobby.

The 100 Eleventh Avenue residents have 24-hour doorman, concierge during the day, a restaurant in the lobby, a garden, an ATM, a private screening room, storage rooms, a pool of 70 meters and a gym. 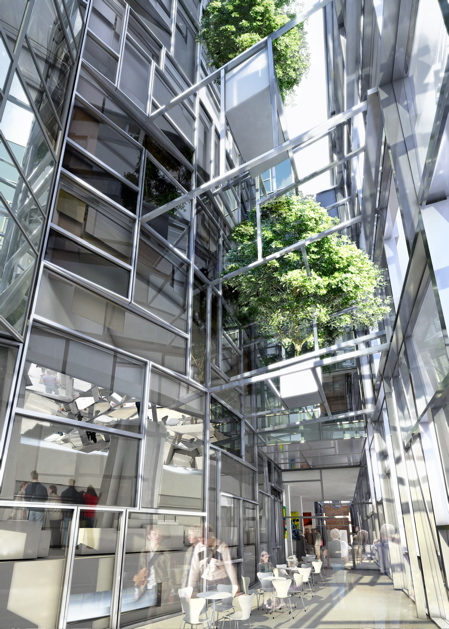 Until the seventh floor the building has a kind of double street facade formed by crystals perteluces where fleeting images of life beyond the building reflected this glass enclosing a semi- enclosed atrium unprecedented in the city New York, whose interior is decorated with suspended gardens and ornamental trees that seem to float in the air.

Nouvel has designed one of the most creative and revolutionary solutions to the challenges of the ground floors of the houses high, a proposal never before seen in the city of skyscrapers. At a distance of 4.57m from the south facade of the building is placed a separate “screen ” glass perteluces, a repetition of the nearby steel frame with its mosaic pattern exposed in the facade. The space created, which rises 7 floors, between the multifaceted outer glass curtain wall and the screen, forming a semi-enclosed atrium street has been called “The Loggia” and containing a steel grid structure complicated.

The grid contains a world in itself, a different space to any other in the city, to be shared only by residents of the Loggia Residences, located between the first and seventh floor. Here, each apartment has one floor, terraces, some closed and other open space. The lodge terraces are designed as a space to enjoy all year round, glazed floor to ceiling spaces at least three sides and radiant heat in the slab. 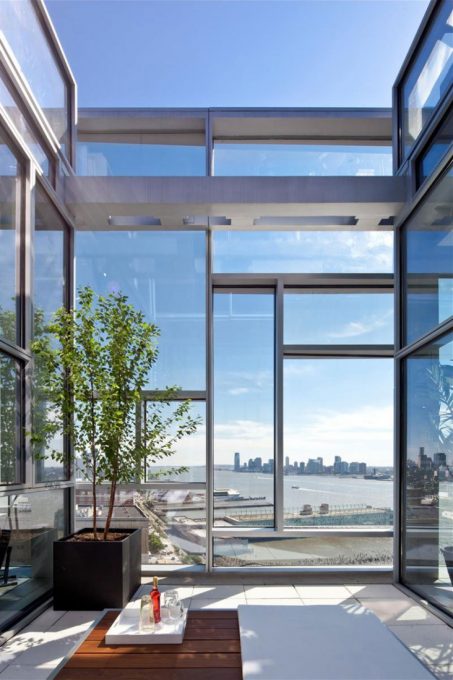 The luxurious 100 Eleventh Av apartments range in size from 82.68m2 to 434.32m2 those with 1,2 or 3 bedrooms and 5 unique penthouses. The top floor is occupied by a single large residence with a private covered deck which Nouvel called “outdoor rooms ”

The ceiling heights in the apartments vary between 3.15my 3.50m, while in the penthouses ranging between 3.66 and 4.88m. All apartments have views to the south and west by shadow mechanized systems.

Among the plants 8-16, the apartments have three bedrooms and a large slightly angled foyer leading to large living room overlooking the Hudson River.

The attic is a four bedroom unit with an entrance 5.50 m wide leading to a living room of 8.84 meters long and a living room with a length of 8.84m to 6.10m kitchen that opens long. The apartment also has a living room desk and a terrace overlooking the north of 7.70m in length.

The walls are designed from the inside out. A typical plant has seven megapanels on the facade, and each corresponds to a quarter MegaPanel. In the larger rooms have a view unobscured surface 11.28m wide. The curtain wall windows are fixed and operable trucks, in various sizes and shapes, in essence a random series of folding planes.

To give regularly to the wall, the team, which included Chinese manufacturers of curtain walls, created megapanels special, some with a height of 3.66mx 11.28m wide that contain within a maximum of 20 smaller, individual panels. MegaPanel joints are the only areas of the facade with a continuous vertical mullion. The curved section of the front has a concentration of smaller panels. 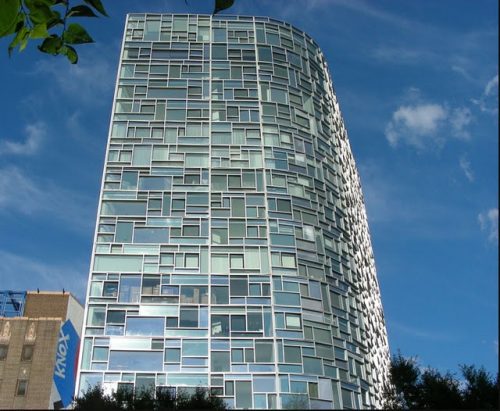 The charge of the assembly of the facade, Marc Simmons, said: “… there is a huge amount of dimensional variety, but not a mathematically generated facade. It is really a composition performed manually from a very architectural idea. It is a game of fragmentation…”
Because the lines of fragmentation, load path slab to slab is not continuous. Steel is the structure of the facade, as the nonlinear load paths and massive panels have conspired to make an aluminum structure too large to be attractive inside the apartments. All elements of steel, 3 inches wide, are based on the same plane, but vary in depth. The steel frame, which is visible from inside the apartment, consists of steel plates cut with laser welded together, then pass a process of sandblasting and painted silver.

The team describes this curtain wall facades as a hybrid that combines the features of a wall with a window where individual panels have no structural dependency with adjacent panels. These panels can achieve certain architectural intentions that could not be achieved with traditional unit of aluminum curtain walls that are designed for efficient production and easy transport. The mega panels of this project are so large and heavy that they can not overlap or have interlocking anchors are independent of each other.

The outer layer is silver anodized aluminum to match the silver painted steel interior. While it is not structural, aluminum panels remains low emissivity glass, insulated and laminated. Three different glass coatings have been selected to provide a variety of colors to the façade to be reflected light. The glass used meets STC strict accordance with noise ordinances of the buildings along the West Side Highway in Manhattan.

The construction is basically made of steel, glass and reinforced concrete.

The interiors of the apartments have ceilings polished concrete and terrazzo floors or hardwood.
The kitchens have islands terrazzo designed by architect with flexibility to facilitate integrated mobile units.
The bathrooms have tactile features designed by the architect Jado.

Most lies south facade and curtain wall consists of 1,647 panels, completely different from windows colorless crystals organized into ” mega panels ” massive steel-framed 3.35ma ranging from 4.88m in height, with a width of 11.28m.

The north and east facades are clad in black brick, referring to the ” industrial architecture of West Chelsea “, pierced with windows of different sizes. The north facade expresses “inside move”, elevator shafts with LED lighting and all sides with windows, too, cabins passengers can appreciate the views of the city.