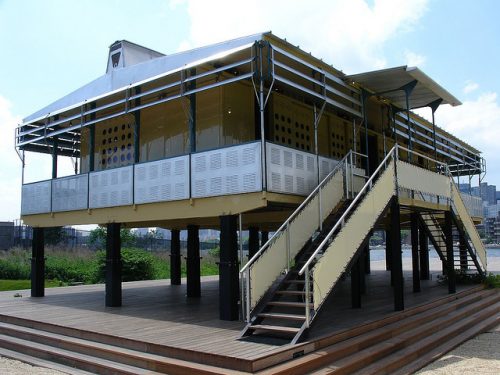 These homes, built between 1949-1951 were found in 2000 in ruins, full of bullet holes state. Dismantled were transferred to France to proceed with the restoration and subsequent exposure.

Between 1949-1951 Jean Prouvé designed and manufactured three prototype Maisons Tropicales in West Africa, with the intention that its construction would serve to address the shortage of housing and public buildings in the French colonies in Africa.

Although designed for mass production, the prototype was not cheaper than the buildings already constructed at the local level, so we had to add the displeasure of his industrial aesthetic to the French bureaucrats conservatives in exile. For these reasons, the house was a unique expression of a radical architectural vision whose production was forgotten.
In 2001 two structures were acquired by Eric Touchaleaume after dismantling who sent them to France where he was responsible for its restoration. The smallest, after a long period of restoration, structure was exhibited at Yale University in New Haven, at the Museum of Contemporary Art in Los Angeles and later at the Georges Pompidou Centre in Paris. The larger house also underwent restoration and exhibited at the Port des Champs-Elysees in Paris in 2006. Thereafter, 2007, he took on sale Christie House and was bought by the hotel and patron of contemporary architecture André Balazs.

The first prototype was assembled in Niamey, capital of Niger. This former French colony is one of the world’s poorest economies. Bordered on the south by Nigeria and Benin to the west with Burkina Faso and Mali to the north by Algeria and Libya and Chad to the east, gained independence in 1960.

The other two prototypes were built in Brazzaville, Republic of Congo, also known as Congo Brazzaville and Congo. Located in central Africa, is also a former French cololonia bordered to the north by Cameroon and the Central African Republic to the south and east by the Democratic Republic of Congo (former Zaire), Gabon and west to southwest with an Angolan enclave (Cabinda). Gained independence in the mid twentieth century. 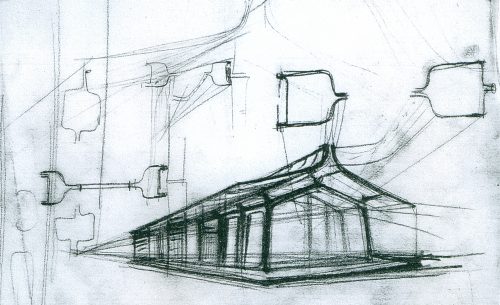 Tropical Homes Jean Prouvé represent the culmination of their studies on “maisons to porticos” houses easy assembly and disassembly that could be manufactured en masse and cheaply, responding to all families after World War II were without roof.

The differences in the foundation on which the African structures were erected, probably due to several factors:

The slope of Brazzaville had not allowed the house to look from the street if it had been built on a concrete slab as in Niamey. Having to play the dual role of promotion office and residence Français Alumninium an executive, the resulting visual impact for promotional purposes was much more impressive on the pillars.

Prouvé continued the solution used by Native builders Congo. Elevated houses facilitate ventilation.
Although a few inches of elevation are sufficient for good ventilation, in the case of Brazzaville, both the cost and time required to build on stilts as its end result, also helped to convey the importance of construction. In Niamey, with more variable climate, less humid and drier was not necessary to raise the platform. 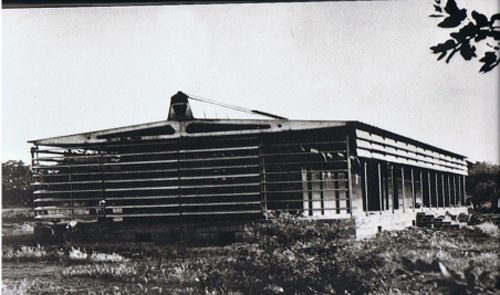 The first prototype was built in Niger’s capital, Niamey, in 1949 and subsequently exhibited at the Port des Champs Élysées. This is the first Tropical House built by Prouvé, 1949, in collaboration with his brother Henri for a school principal and his family.

Its area of ​​108m2 under roof 26×10 was divided by a courtyard into two rooms that were used as housing and living to teach.

The space comprising: living room, kitchen and bedroom for the young man and a toilet. The private area, separated by a courtyard had two bedrooms with separate bathrooms.

Weather conditions ruled the specifics of each of the designs, particularly the plans for air circulation and passive cooling. The prototype of Niamey, is in a semi arid climate zone in the Sahel where temperatures rarely drop below 33-35º so the house was built on a concrete slab covered with glazed tiles that help cool the environment. The slab feet high underlies a structure 10 meters wide by 14 long. The whole is surrounded by a 2m wide terrace equipped with adjustable brise-soleil. 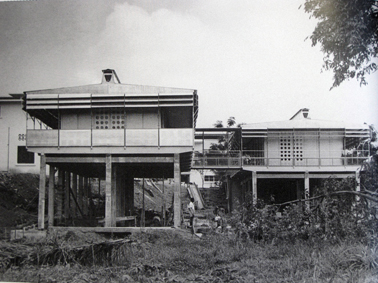 This is one high ground on stilts. One of the structures of 10×20 meters and the other 10x18m mounted on one floor with beams and joists folded sheet resting on concrete pillars.

The smallest structures consisted of a waiting room, a main office, an office secretary and a sink. The largest structure exerted housing and separated from the former by a corridor, had a living room, two bathrooms, kitchen and three bedrooms.

Considering the climatic requirements of the place Prouvé surrounded the house with a porch equipped with an adjustable aluminum screen reflecting the sun and creates an outer skin that counteracts the extreme heat. The exterior facade acts as a second skin of the house
Double roof structure is also designed for natural ventilation.
In this area, subject to a long rainy season, the buildings erected by Prouvé were based on a structure of support beams mounted on springs, with use of vertical and horizontal elements, blinds, vents and screens, responding to conditions site. 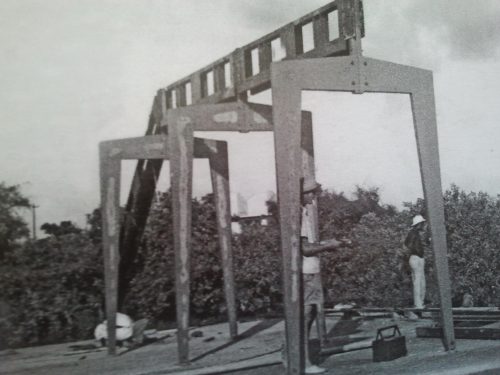 The construction technique is based on the principle of axial gantry, steel and aluminum coating. Adapting to the tropics Prouvé adapted the support frame of these houses.

The core of the building, its interior space, 6 meters wide by 12 long, was surrounded by a gallery of two meters wide at the side facades and one on the front that provided shade inside all day, as if it were a first protective skin.

The second inner casing provided additional cooling cell wing an opening through a chimney on the roof interior, thus ensuring air circulation.
The inner support was provided by pieces of steel, an articulated in the case of the Maison de Niamey, with inverted U-shaped frame placed in the center of the space and on supporting the roof. The remaining weight was supported by the side walls that could be opened by sliding or double leaf doors. At the time that the walls are closed, light and ventilation holes penetrate the sliding doors.

The houses of Niamey and Brazzaville are made from folded sheet steel and aluminum. To facilitate transportation, all components were flat, lightweight and could be neatly packed in a cargo plane.

The interior walls were made from fixed and mobile metal panels on which ox closed eyes opened with blue glasses to protect against UV rays. The galleries had brise-soleil rotating blade for protection and oak floor. The inside was achieved by ventilation airflow.