The Gate Tower Buiding, (ゲ ー ト タ ワ ー ビ ル) with its 16 floors dedicated to offices, an attic for machinery and two underground basements, does not attract attention by design or height, but because a highway through the building. In Osaka, where it was built has been nicknamed the “Beehive”, referring to its appearance of “lively and bustling place.”

Since the early Meiji period, companies logging and coal had property rights on the ground, but the gradual change in society towards other energy sources caused the deterioration of the buildings sector. In 1983 it was decided to remodel the entire area, but the permits were denied because he was planning the route of the motorway. When the development of it was almost finished the problem arose: the small but crucial piece of land intended to support the center of the exit ramp Umeda, was owned since 1870, a dying company wood and coal whose owners were not interested in selling the valuable property rights. As there was no room to change the ramp, the two sides sat down and began negotiating

The owners of property rights negotiated with the company Hanshin Expressway for approximately five years up to the current solution. Although the vials companies generally buy the land on which they build, not always reach an agreement for sale, as here, in Japan we can expropriate the land.
Usually, even in the Japanese country, roads are built above or below ground, passing through a building is an extremely rare occurrence.

The Gate Tower Building was built in Fukushima-ku, Osaka, Japan. Although the area is mainly residential, has some office buildings and a shopping area, as well as factories and wholesale business. Since the late 90s, skyscrapers have been built for both home and office, mainly due to its proximity to Umeda and business centers Dojima

The Gate Tower Building is a clear example of urban engineering skills in Japan, ready to solve with determination potentially thorny problems and, above all, to reach a consensus regardless of time and effort required to do so.

The building designed by Azusa Yamamoto-Sekkei and Nishihara Kenchiku jimusho Sekkei has 16 floors above ground, two basement and attic floor dedicated to machinery. With an overall height of 71.9 meters at its rooftop helipad was built.

They located over an area of ​​760 m2, to build their 7,956 m2 structural steel frames and concrete were used.

Suezawa Sangyo Co. Ltd., which owns the building, was not the only part in this construction had to make some concessions to accommodate the exit ramp Umeda. The Hanshin Expressway Corportion, was required to isolate the building from noise and vibration, this demand was made in several ways.

On one hand, the ramp is freestanding and is designed as a weighing bridge rests on pillars. Interestingly, as the closest building pillars are complemented nicely with the faceted facade of the tower, repeating his appearance.
Second, where the “dogleg” ramp curves have wrapped the sides of the building, about 12 meters on each side, with a “silencer” which thus dampens the sounds of vehicles.

The building has a dual core construction with a circular cross section. The Umeda out, towards Ikeda in the system Hanshin Expressway, passing between the fifth and seventh floors of this building and. The road is the tenant of those plants. The elevators, which for practical reasons are located on the outside of the building, passing through these floors without stopping, stopping amounting 4 floors from the ground floor and then not up to the 8th floor surface not occupied by the motorway between the fifth and seventh floors, is used for machinery and stairs.

In 1995, during the Great Hanshin Earthquake, some sections of the highway were severely damaged, but the Gate Tower Building and the sector of the road that crosses were unaffected. 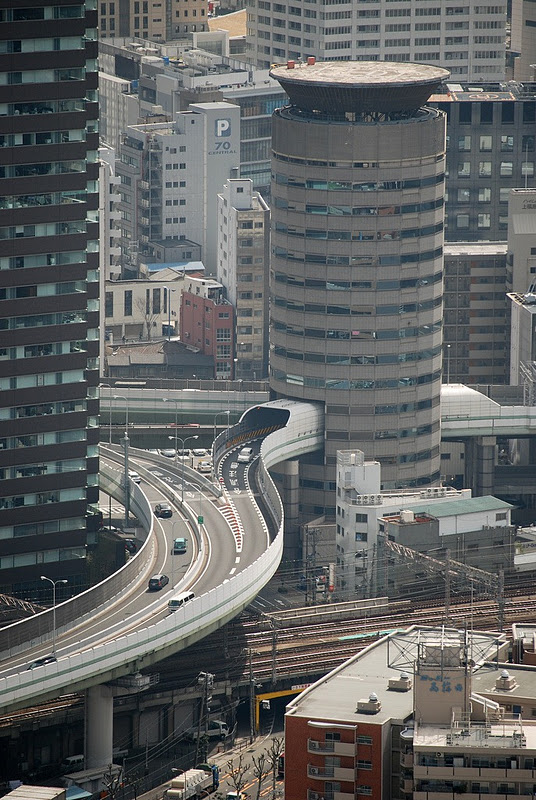 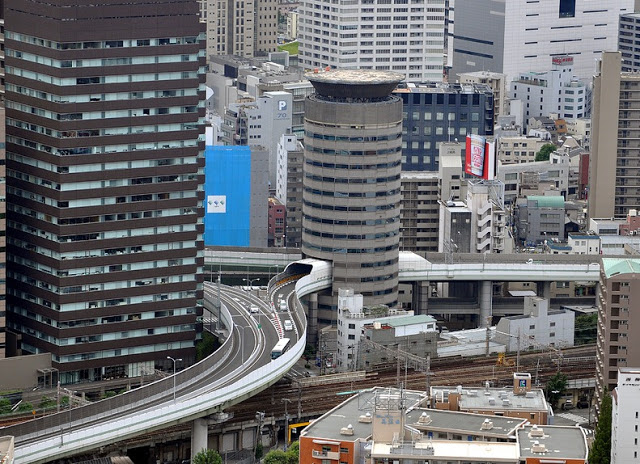 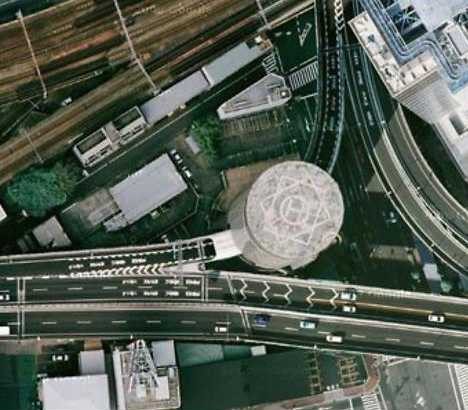 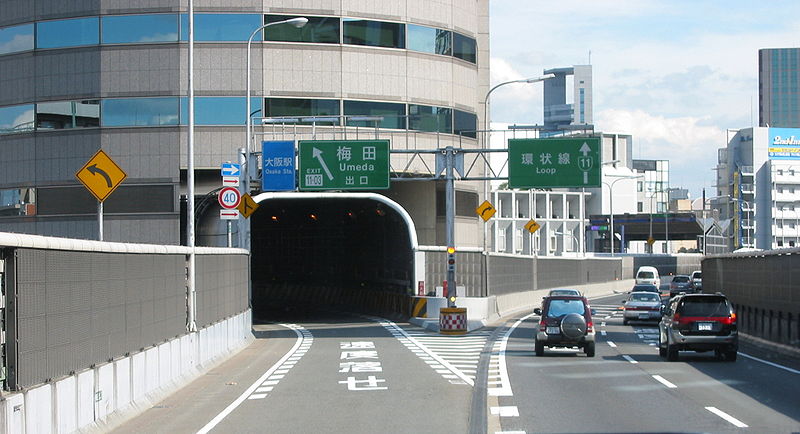 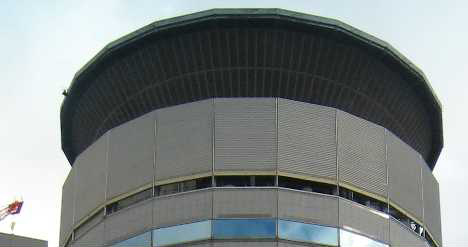 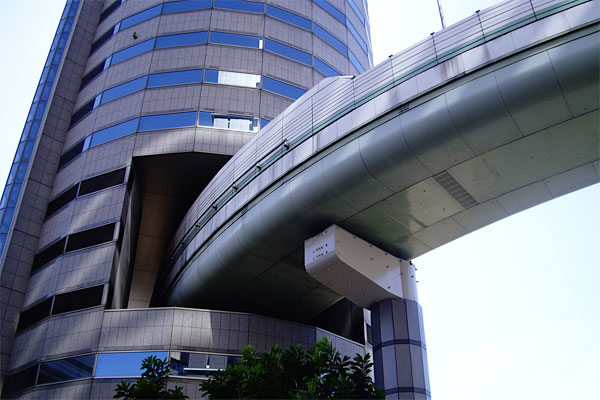 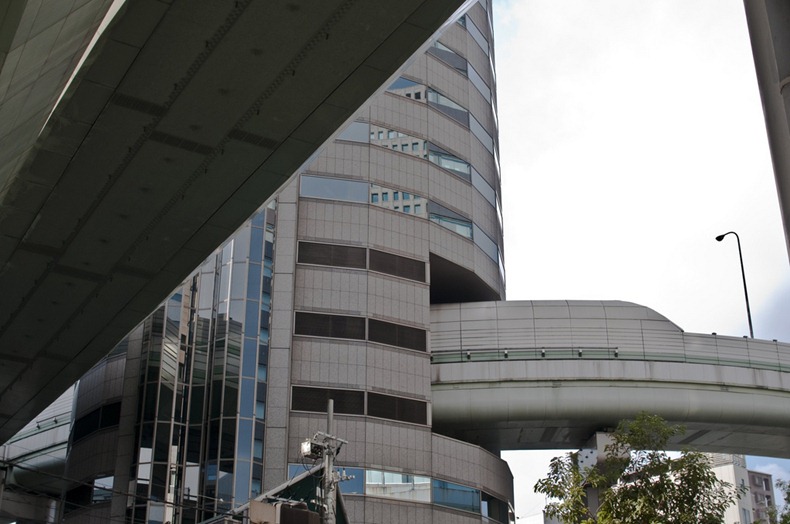 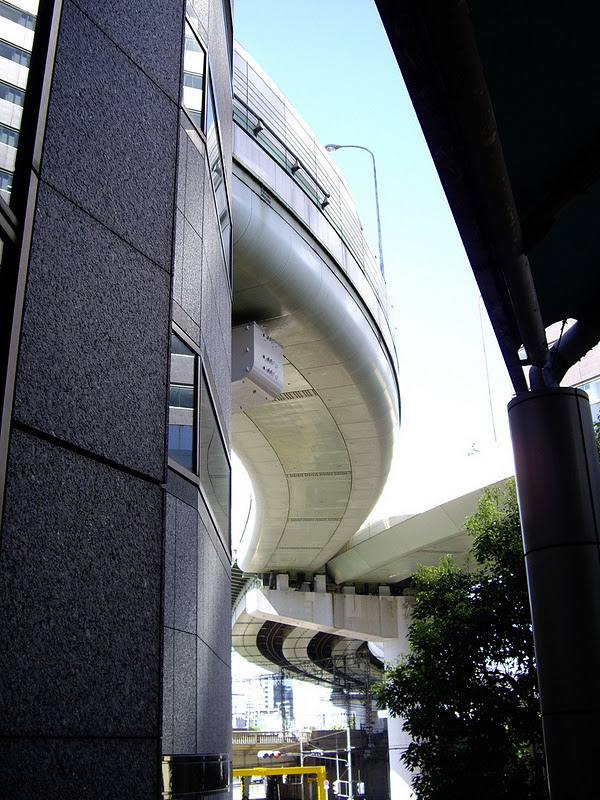 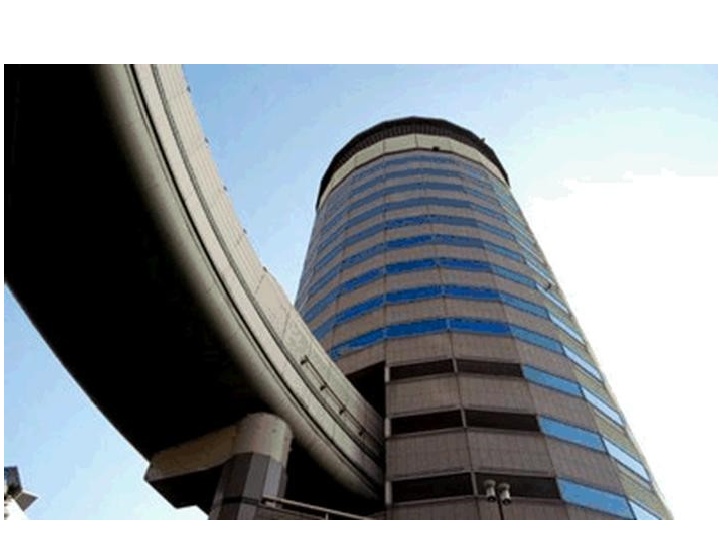 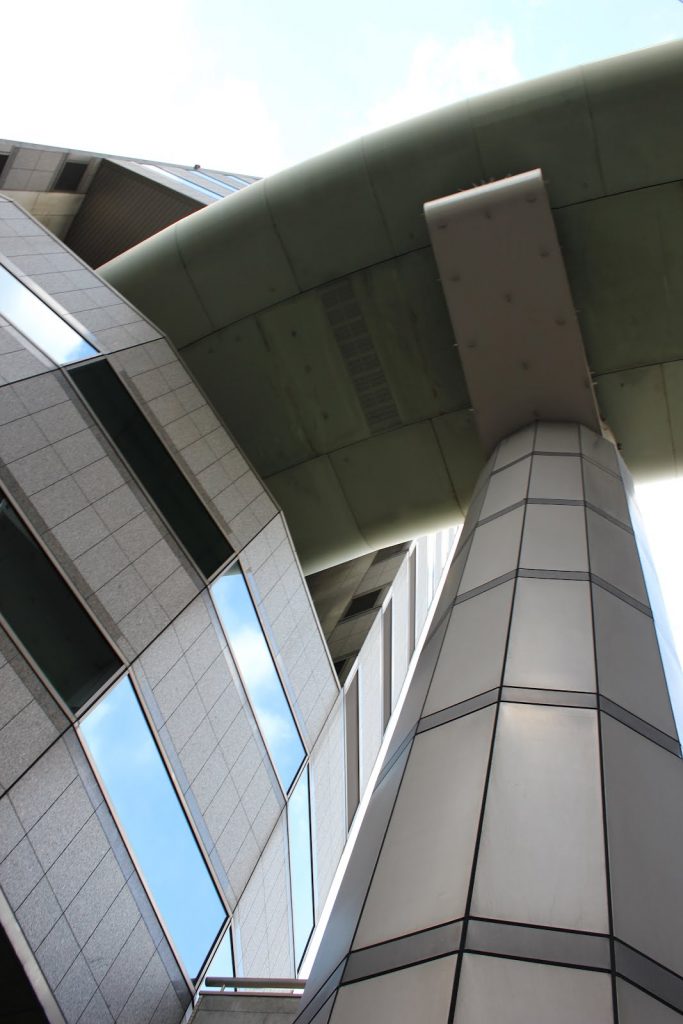 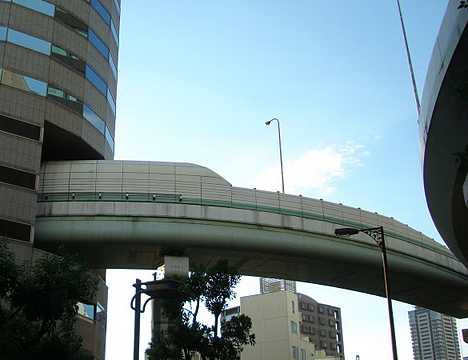 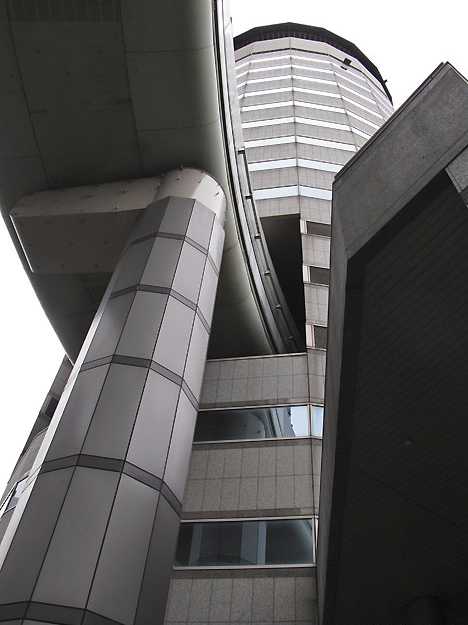 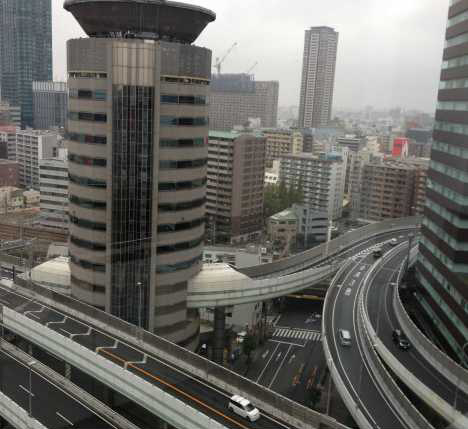 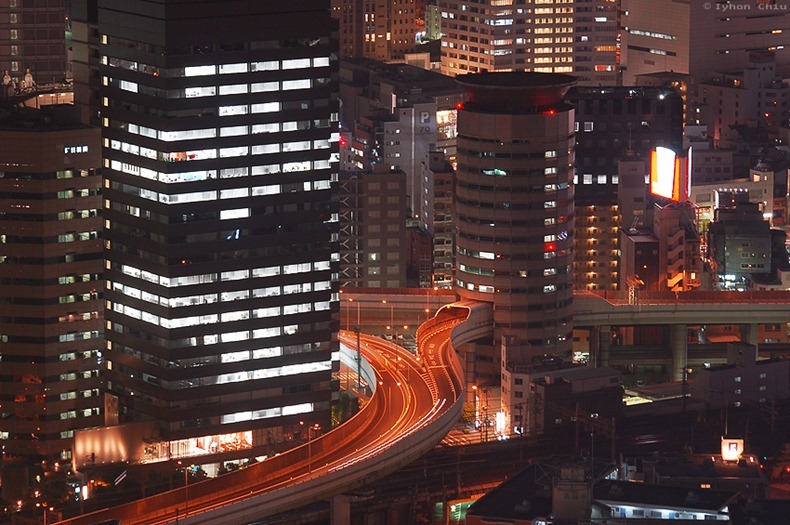 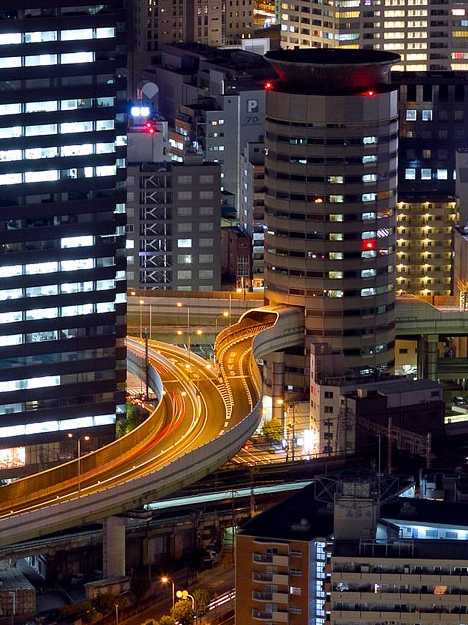 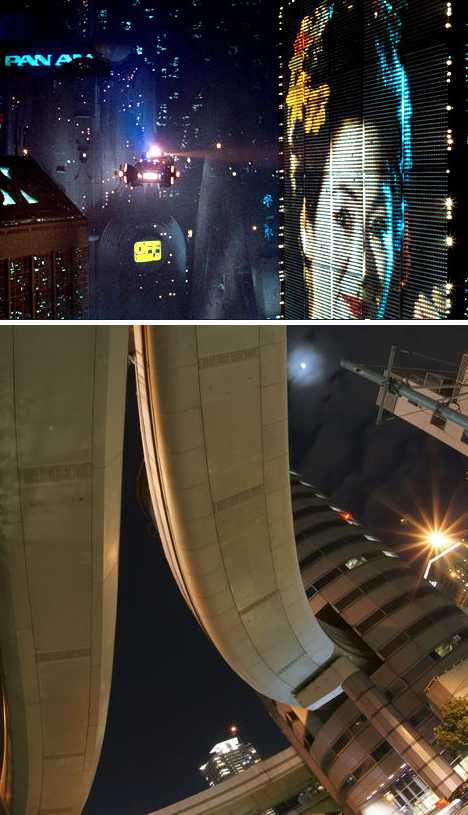 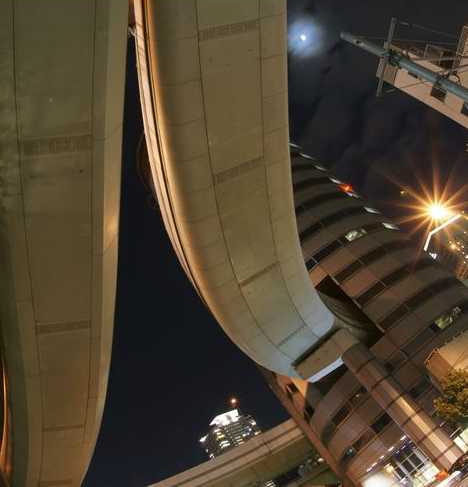