The Lyon-Saint-Exupery, initially called Satolas station is the terminus of the TGV trains connecting the airport with the city of Lyon, 24 kilometers south, the first airport that connects directly to the European System of Trains High Speed.

In the contest clients, French Railways (SNCF), Region Rhone Alpes and Lyon Chamber of Commerce and Industry (CCIL) made it clear that besides being easy to use should become a symbolic and attractive building that represents the gateway to the region and would be part of a campaign to promote trade through improved transport. Designed in 1989, the station was completed in 1994.

Like other structures airports, as TWA Terminal at JFK airport from Eero Saarinen, or Zurich, based on figures of birds, the design of Calatrava to the Gare de Lyon-Saint-Exupéry has the aerodynamics of a bird preparing to take flight.

Originally called Lyon Satolas Airport in 2000 was renamed in conjunction with the railway station, in honor of the writer and aviation pioneer Antoine de Saint Exupéry Lyonnais.

The Lyon-Saint-Exupéry TGV, initially called Satolas station, is one of three railway stations third most populous city in France, Lyon. Is the only one located outside the city center, Gare TGV to Lyon Saint-Exupery BP 176 69125 Colombier-Saugnieu, approximately 24 kilometers on the route of the high speed line Rhone-Alpes and directly connected to the airport Lyon Saint-Exupéry.

From the terminal high-speed Airport station TGV trains depart to a large number of destinations in France (Paris Gare de Lyon, Marseille and Montpellier) and connections to other European countries.

The structure of almost forty meters high steel and concrete is the metaphor of a huge bird that stretches out its wings, covering or protecting the railway. As in other structures of the architect, the movement is present in the profile and arrangement of the elements of it, its shape also refers to many of the sculptures of Calatrava as “Bird” and “Bird II”.
The central building is given endowed with a symbolic image of flight, which facilitates its association with the character of the region, bringing together the idea of ​​alpine landscape with pulse progress. The projected cover is like a giant bird that rises above the train tracks.

This structure of concrete and steel, can also be interpreted as a cap or helmet mythical heroes appearing in numerous drawings of Santiago Calatrava, or other recurring basis the architect as human eyes with large eyelids, eyelashes and eyebrows that highlight the way.

Access to the main lobby is performed on the street, and down towards the platforms there are stairs and elevators on both sides. The terminal has a total length up to 450 meters Airport.

Unlike what usually happens at the terminals of air and land transport where directions are indicated to the user through conventional signs contained in crates, Calatrava opt for a fully differentiated functionally specialized disposal receptacles indicate the identity and position of spaces through the configuration of the enclosure. Concrete bridges, stairs, escalators and glass elevators provide access to the platforms.

The station is basically composed of:

From the Main Hall, triangular, where all services the airport and TGV station is located, leave two domes of glass and steel like wings that connect to the train platforms. The hall has a length of 120 meters, with a width of 100m and a maximum height of 39m, an indoor weighs 1.300tn. From this hall you will pass a large corridor on the platforms and tracks, with a length of 500 meters which runs north-south, parallel to these and covered with a structure that can be interpreted in different ways: read both two-dimensional sectional cross, as a succession of arches or as a series of cantilevered members that touch at their tips. Another reading is from a three-dimensional view, which is organized as a continuous spatial grid that displays a certain tree structure, highlighting the perception of the ribs. Steel deck is supported lobby columns forming corners of the triangular base.

Originally in the side of the central four-way crosswalk were constructed, two on each side, covered by a lattice of concrete were added but then other two outside the lobby. The structure was drilled at ground level, including niches for light fixtures.

In the main hall, on the opposite side of the entrance, a gallery of 180 meters long on high to allow the passage of vehicles under, connected with the terminal station of Lyon-Saint Exupéry airport. From this gallery you can also will access the underground area services, elevators and parking. To enter perpendicularly to the station, the gallery suffers a jog at the point of intersection with the walkway that leads to the parking area.

The facade is framed between the gallery and the international terminal, preserving, where possible, the symmetry of the composition.

The service building adjacent to the central hall, and on its east side, has in the basement locker room for station personnel, equipment rooms and area distributions. Downstairs, a hallway where ticket counters and other rail services, shops and offices are located. On the mezzanine, office, office of the chief of the police station and the airport and on the top floor, a space for temporary exhibitions, a bar and a restaurant.

From the outside, the main Hall access is via a “portico” formed by a concrete pillar V shaped termination linking four steel arches.

The central pair of arches continue the centerline of the roof to form a backbone of leaving the outer curves spanning the two symmetrical side wings crystal beams. The adjacent pair of beams jumps 120 feet above the highest and glass lobby of the station and service core located east. These ribs are raised on the north and south facades, whose perteluces withstand the cantilevered section.

The main hall is triangular and its backbone is formed by three arches braced together by diagonal beams that rest on a concrete mass raised on the east side and two supports integrated with lift towers on the west side. The upper arch of the column is a triangular box section steel, while the two lower arches are composed of steel pipes. Transverse bracing members vary in size and assembled four by four along the core tubes. The most striking building profile is based on the two converging core steel arches 120 meters long and 40 meters high. Two large cantilevered balconies enter the space.

Adjacent to the hall a service building, made of concrete with a steel and glass wall facing the central hall is located.

Steel, concrete and glass are the main elements of this structure.

Of concrete, cast in situ, the roof deck support and compliment visually the same modules in the main area of ​​the terminal. Concrete is a natural color due to the use of a white sand area.

The steel parts that are part of the cover are provided with a dark hue, unusual detail in the works of Calatrava.

The glass walls that form the lobby, are formed by panels with a width of eight feet. The roof is glazed in some sections and other stuffed with prefabricated concrete sections, such as the cover over the platforms.

The gallery connects the terminal station to the airport by pedestrian tapes. 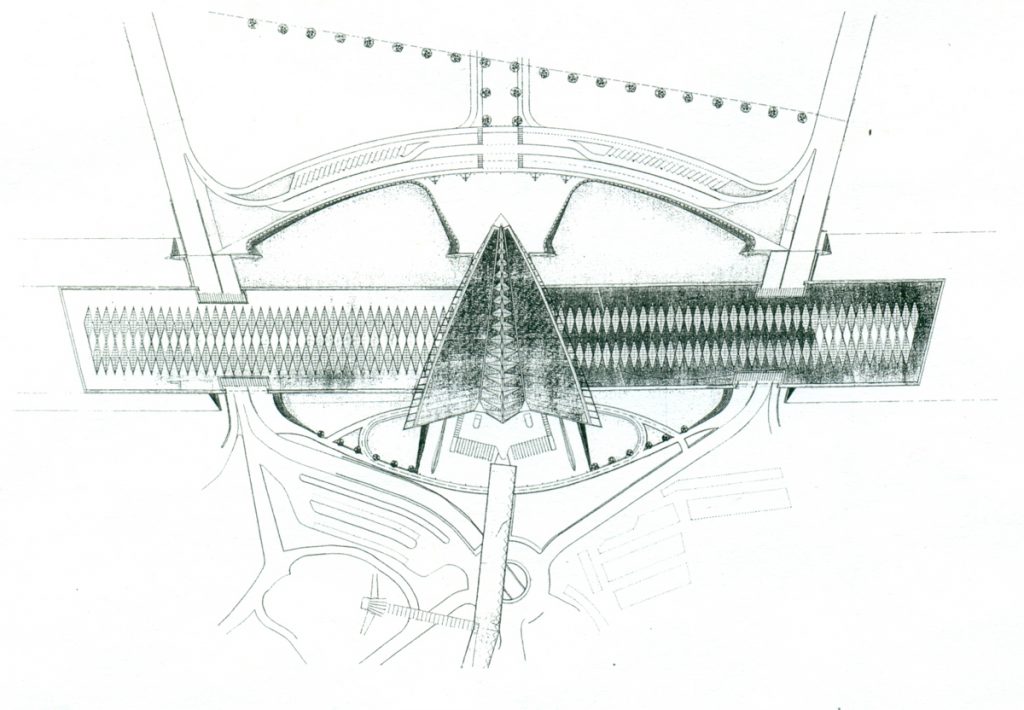 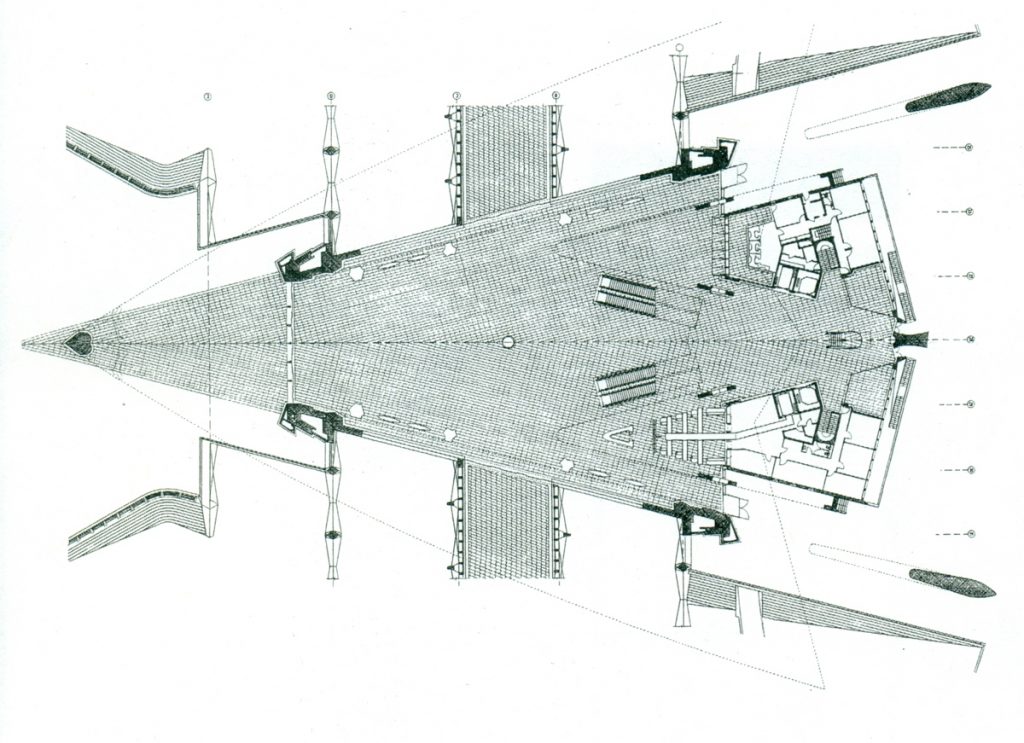 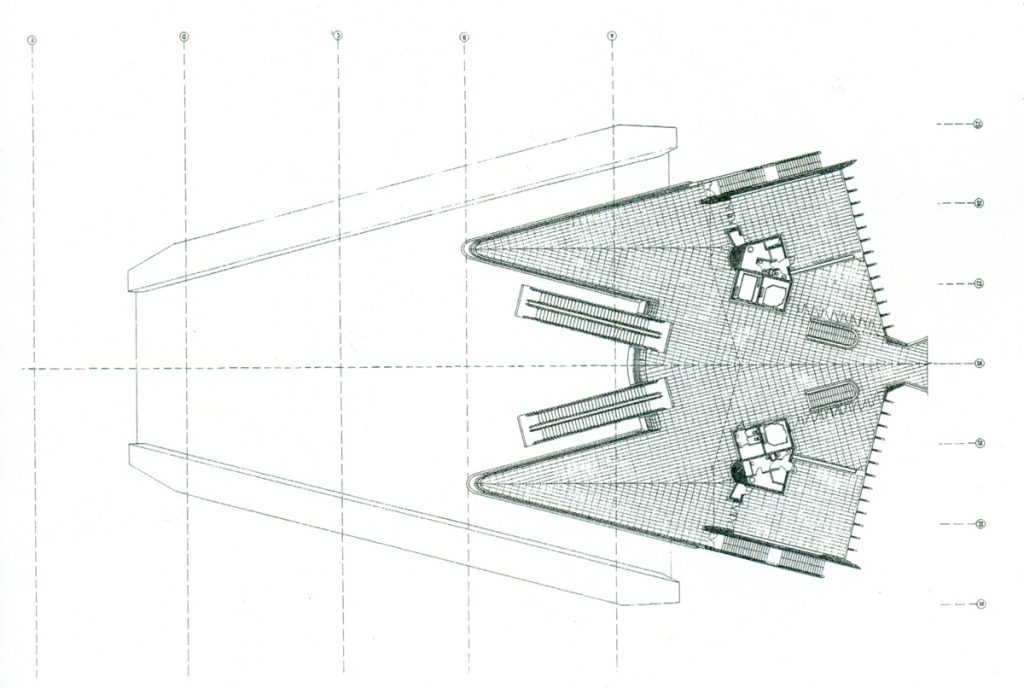 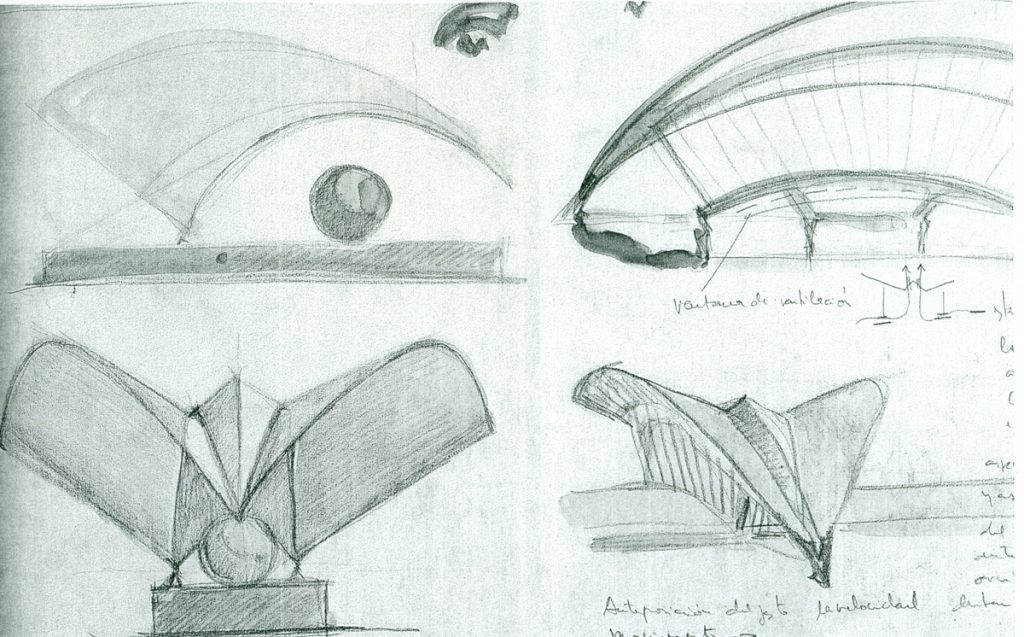 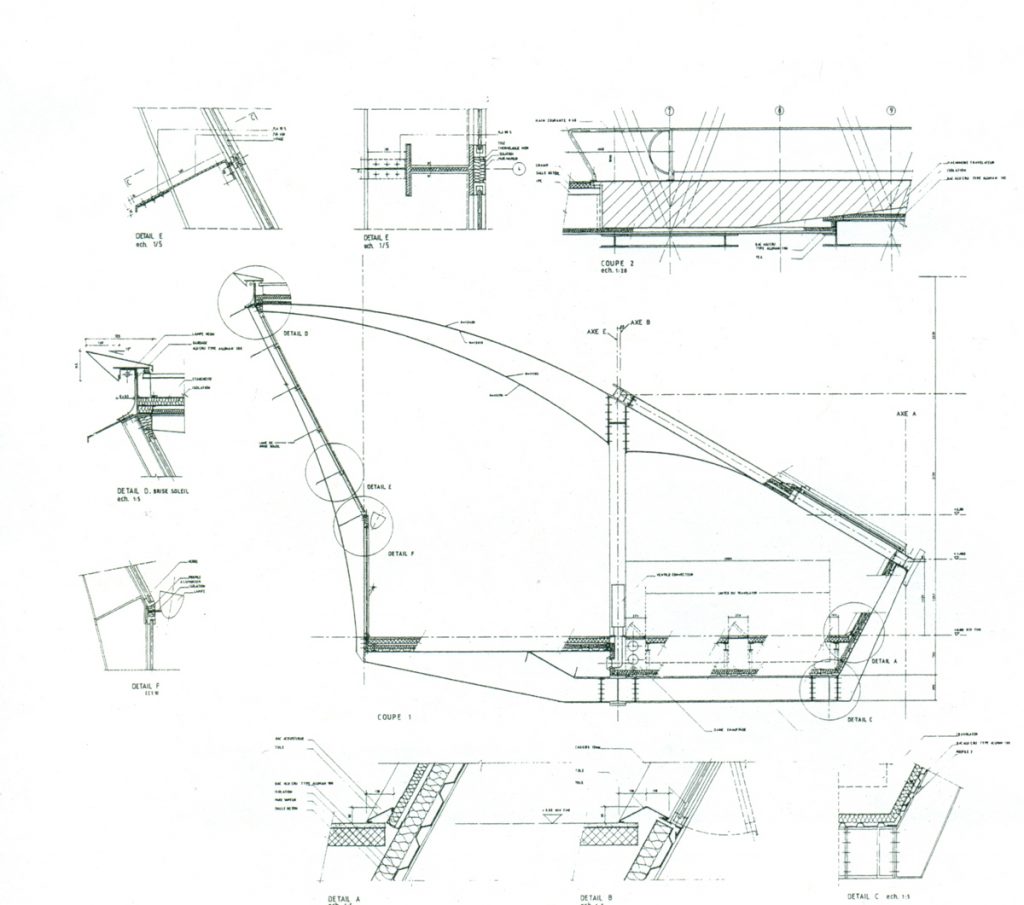 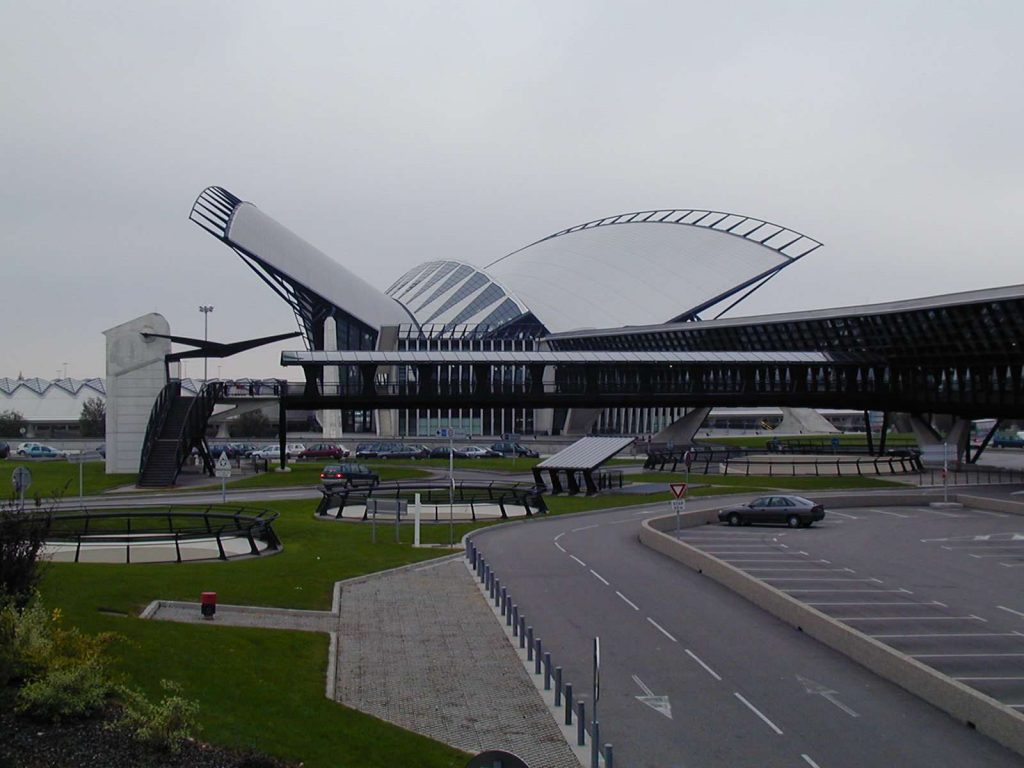 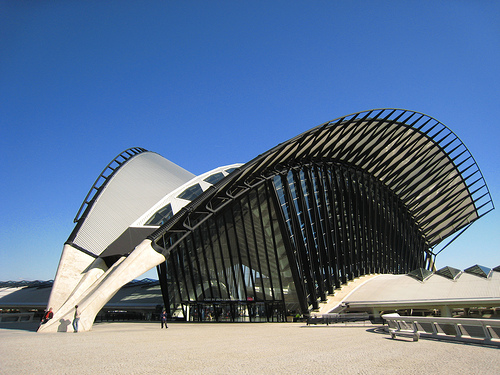 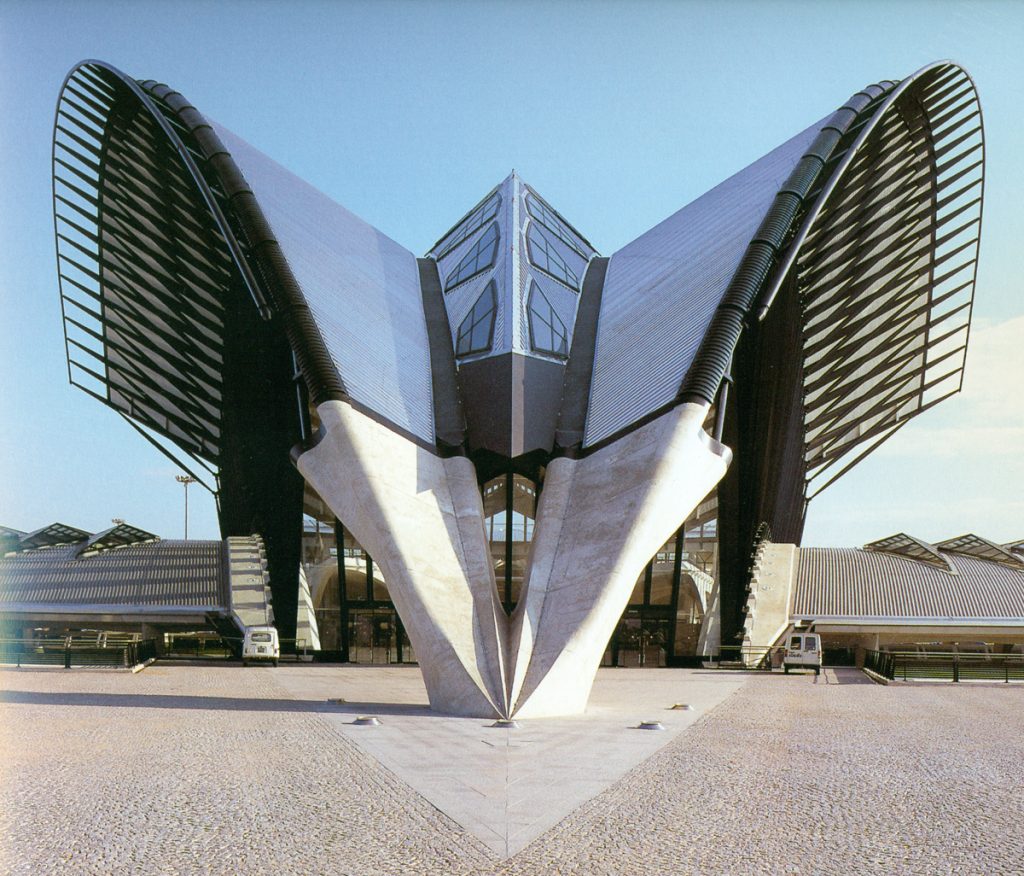 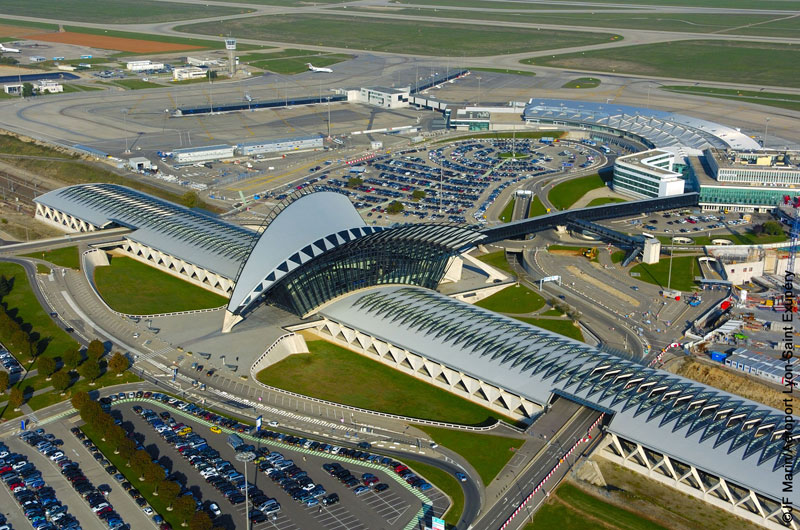 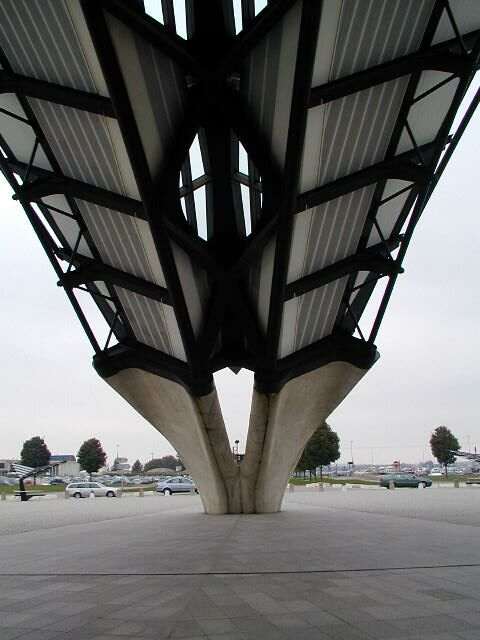 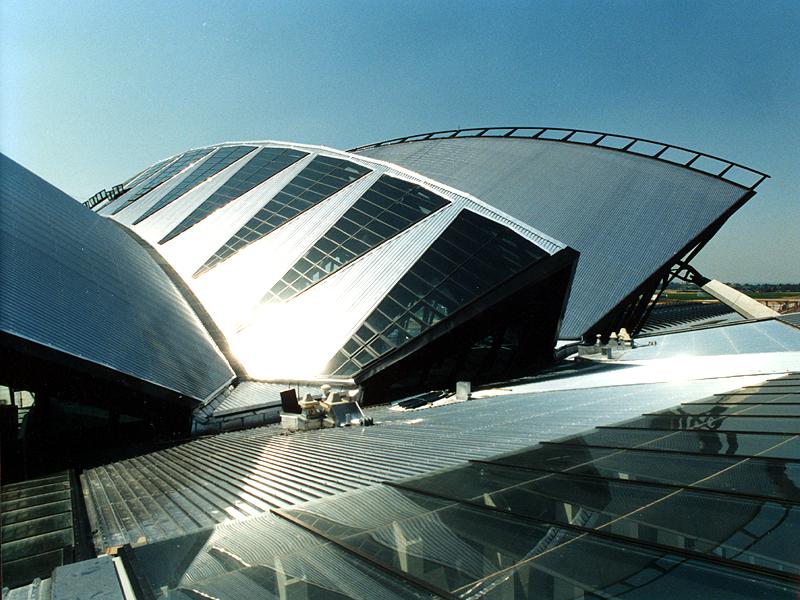 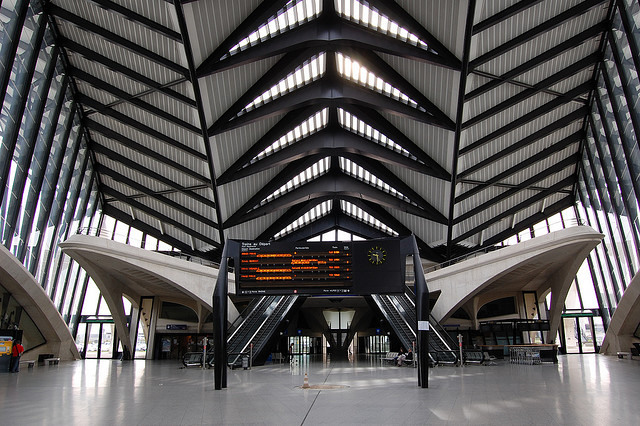 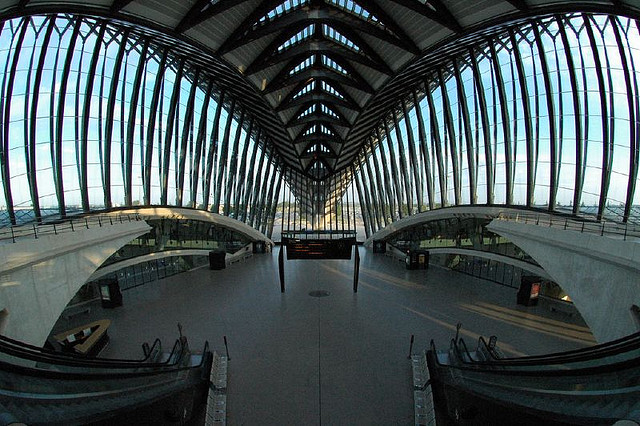 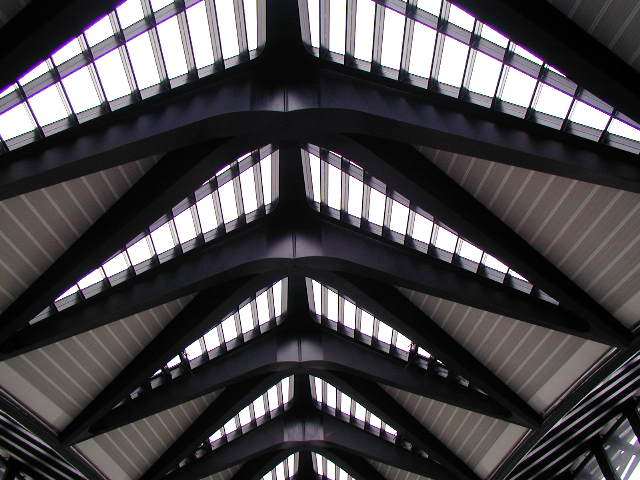 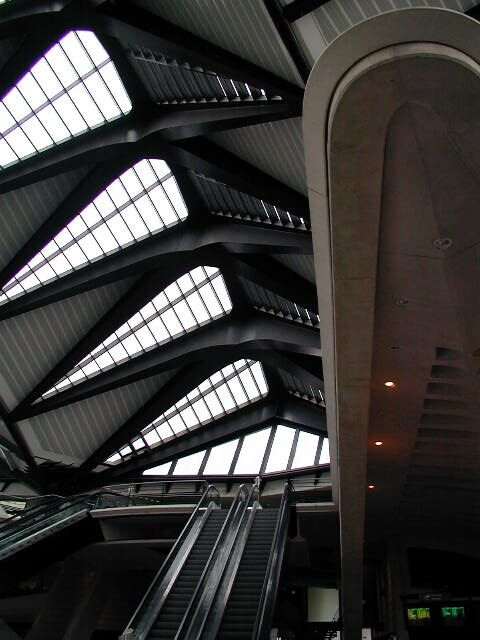 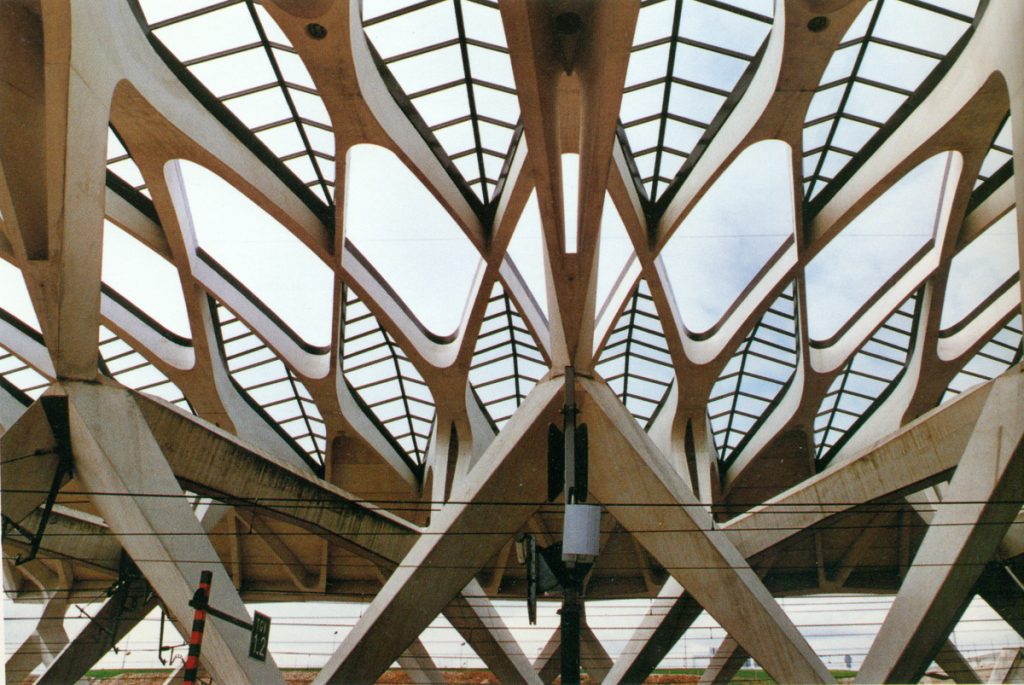 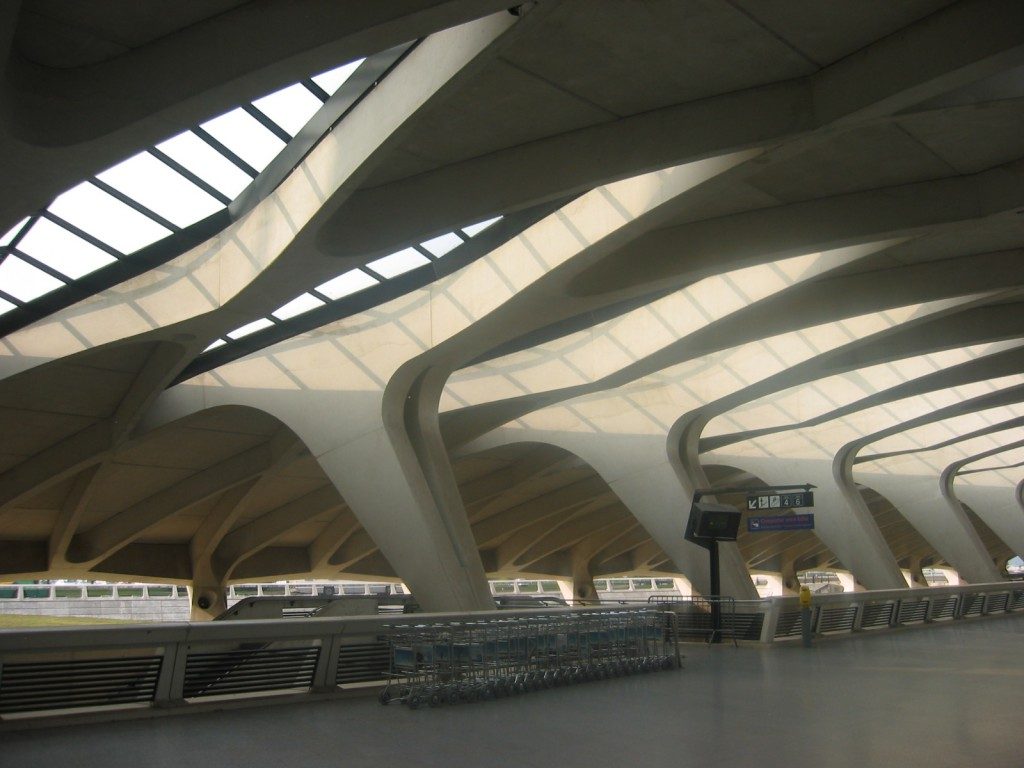 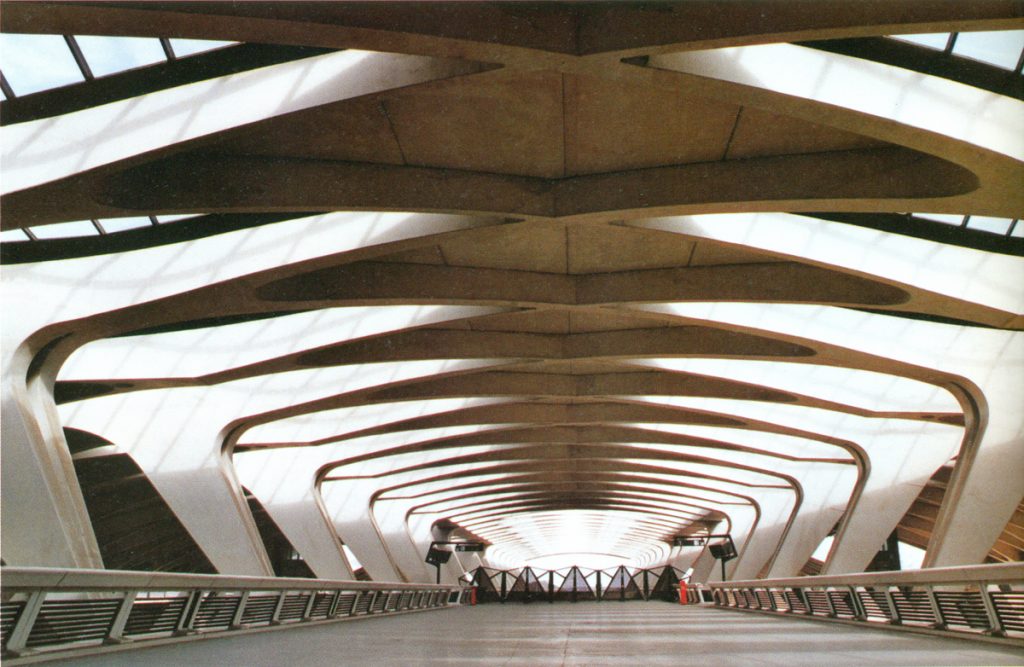 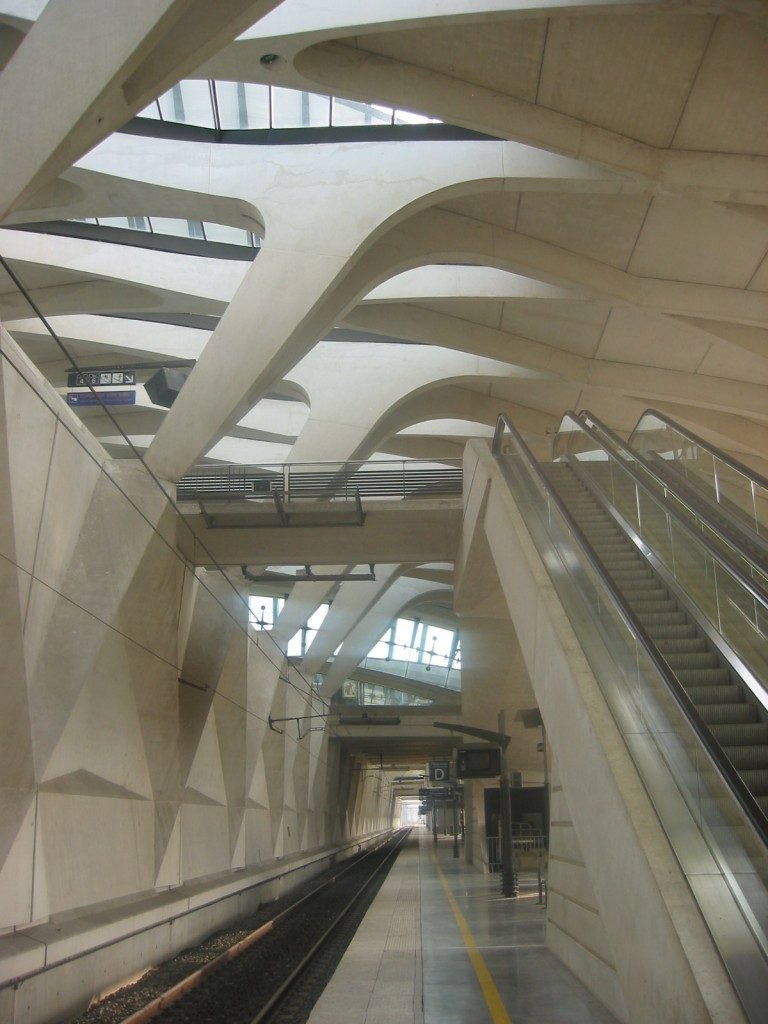 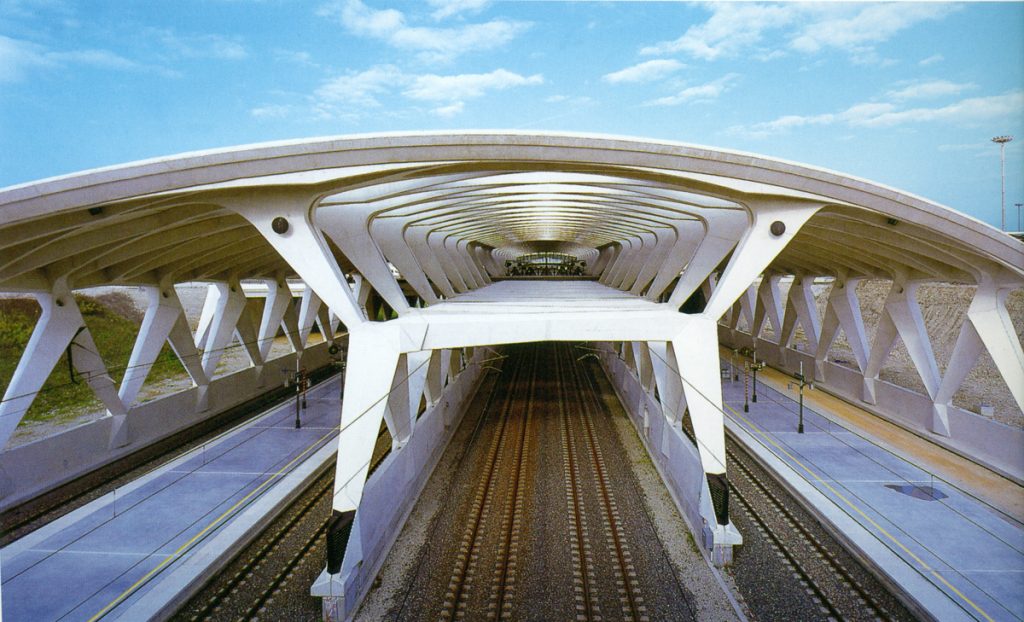 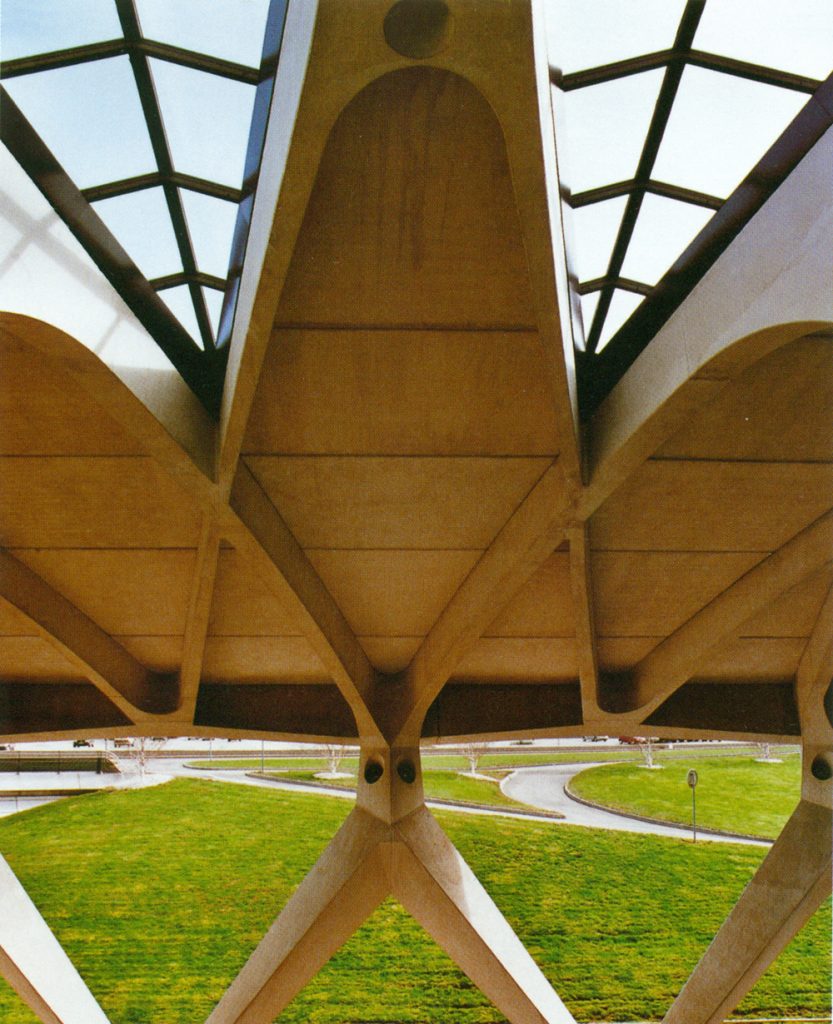 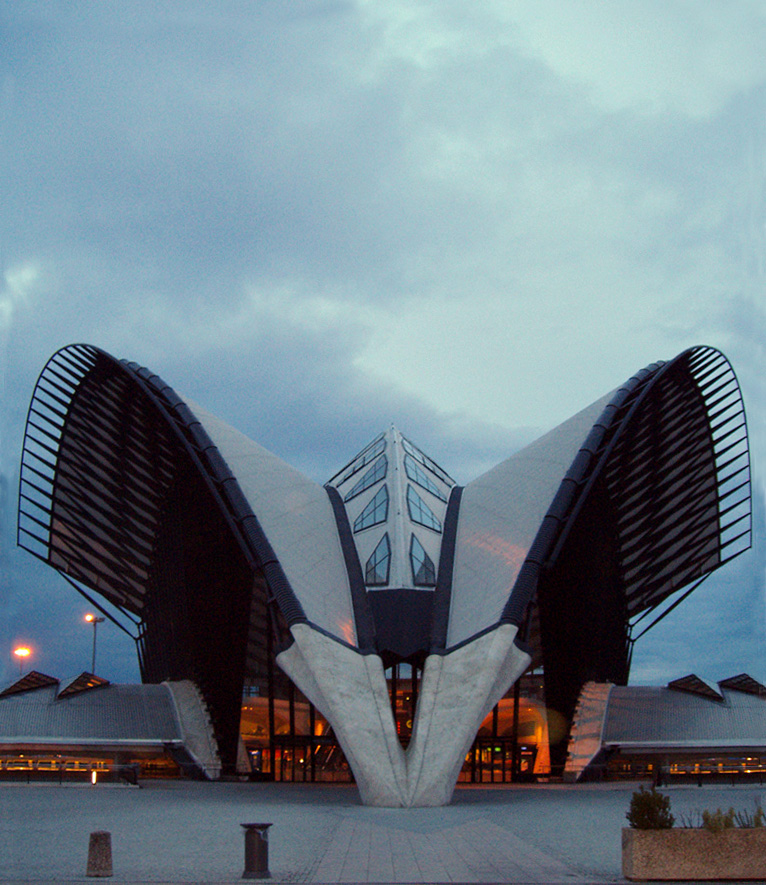 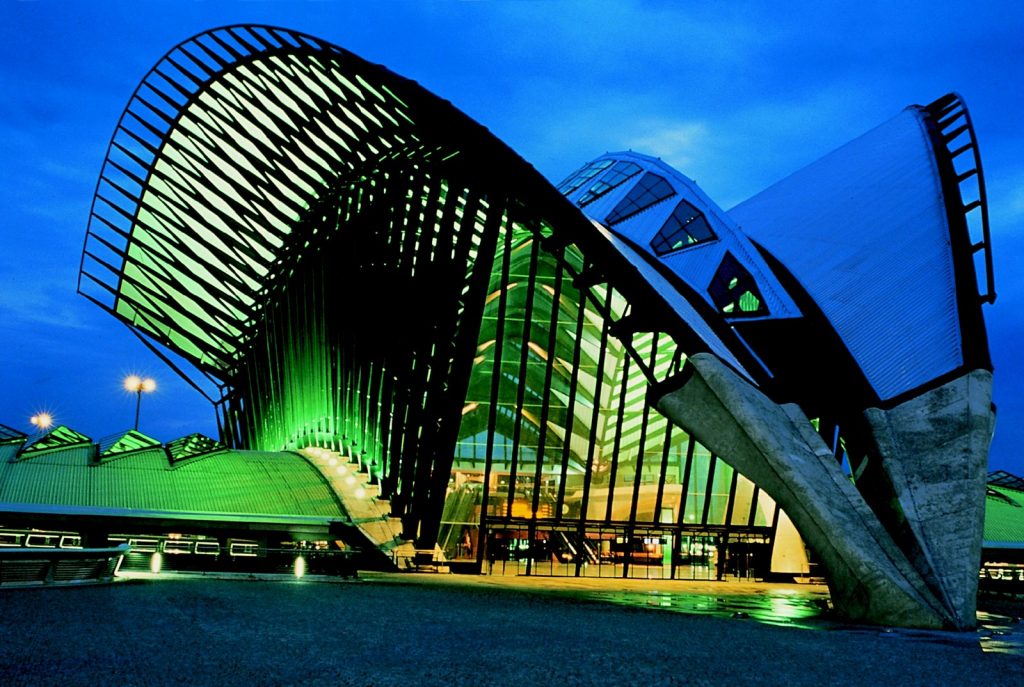 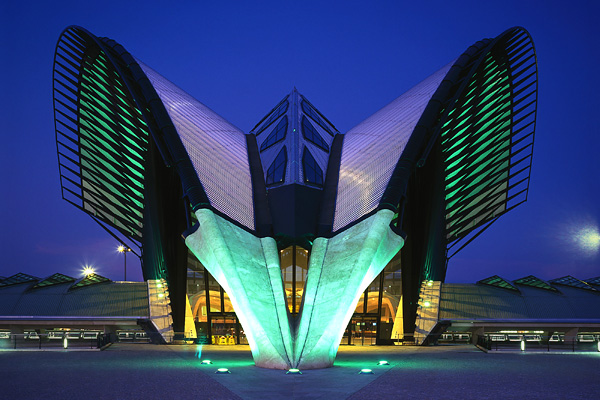