The population density in the area is low, with most homes of family and small business. The area is surrounded by leafy trees and shrubs. Due to the proximity to the beach, the terrain is irregular and with many sand dunes. Soil is a mixture of soil with sand, and you can see a considerable amount of rocks in the vicinity.

The Land and Climate

This feature is typical of Australian soil, where a huge part of the country is desert or semi arid. With less fertile soils, Australia is the driest inhabited country in the world flat. The highest point for a little over the 2800 meters, and only in two regions of the country the climate is temperate.

Those are a great challenge for architects. Climate, Aridity, and the consistency and irregularities of the terrain, pose a far less complicated for the resolutions of the habitat.

“Simple, almost to the disappointment,” is how Sean Godsell to define its architecture. His unconventional style is what it has done to highlight. Without the idioms, the Australian architect seeks his own style with timeless designs and minimalist austere face.

Godsell respects the basic concepts of architecture, taking away everything that feels as a “surplus” and extras. Their projects tend to have simple and well-defined morphologies, since its search is based primarily on the interior space and the relationship with nature.

And the first sign of this is the way it takes the field. Taking advantage of the gap, the project is embedded within the earth, and generates a higher level on the top and another lower level that opens on the bottom.

At the Peninsula House, the architect sought to create a house where people were the actors who give life to it. Following the idea of a little Le Corbusier defined when the housing and the machine for living, the design reflects the intention that the house was adapted and tailored to the user.

Godsell tried it in your project, people who are “active construction” and may become a “professional domain.” It is they who decide whether spaces or prefer to maintain their fluency sectorize; resolved if it is they who want to establish relationship between internal-external, are the ones who determine their way of life and living.

Therefore, the flexibility of housing options and should be essential, as well as to respond to inclement weather and provide shelter.

With all this taken into account, Godsell called for resources almost obvious but no less effective. His answer is blunt and concise. As if it were a metaphor for nature, recreates the essential concepts of the human body or animal.

The first item considered, are the “bones”, the mainstay of any living thing: in this case would be the structure that serves as support. Secondly, the skin, represented as the shell that covers the bones (used in some skin twice: first as a protective mesh and the second below it). And third, joints and organs, characterized as the circulation and environments with different functions.

But perhaps most interesting about this house is that Godsell not projected as an autonomous body that denies its environment, and closes itself. In contrast, the architect gives the user the possibility to establish any kind of connection to the outside. Therefore, parts of the facade can be opened or closed to connect the protected spaces inside the rough exterior.

On one side, three gates were built to connect the living room with a wooden deck with grill, table, a home and outdoors. In the front of the house, a glass cloth can be lifted, so that will be spread abroad, with the ground at the same level. In the same way that the bathroom has a glass door to the high common bathroom with a Zen garden.

However, Godsell decided that all these parties liftgate and no openings were apparent from the outside, so the shell stays the same in all their faces hidden inside and when it is completely closed.

At the Peninsula House, Godsell organized interior space from three places: the living room, bedroom, and the desktop. These three functions are as articulate and organize the house. They are located in aligned side by side, and have secondary functions that are attached to them: bathroom, kitchen, and a deposit.

This will access the interior of the housing by the upper floor, where it is the master bedroom with bathroom and patio zen. From here you can go down a ladder between the outer skin and the inside to the living-dining room with double-height kitchen.

This idea that the house was a space within another comes from the Japanese architecture, influence important Godsell, who appreciates the cultural mix and the search for the best of both.

The prism has lengthened eighteen steel gantries 8 meters wide and 7 meters high. Taken together, form the external structure of the house. This steel has been specially treated to develop a surface oxidation that enables you to protect against the harmful effects of corrosion.

On the structure supporting the wooden slats that form the outer skin. And from this structural modulation consists internal division, using the portals to support and sustain.

The outer skin that gives character to the house is made from slats of wood that were recovered from demolition of mills and farms in Australia. This detail, although imperceptible to visitors, is of paramount importance to the architect and the house, as one of the premises was that housing would be “eco-friendly.”

These thin strips are placed horizontally in order to break a little with longitudinality the house. Its use has two good point: first, to prevent inclement weather from affecting the home life in the second screening the entry of natural light. But what is really valued their use is generated by a bellows between the exterior and interior, creating gaps and transition. In addition, Godsell trying to play with light and its impact on everyday life and stress in the same way the play of shadows and reflections at different times of day.

The glazed interior volume is elongated like the shell. This volume contains all the functions, which predominates in light-colored wood floors, walls and warm colors. 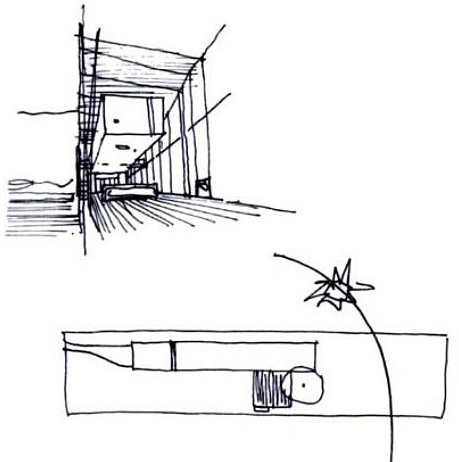 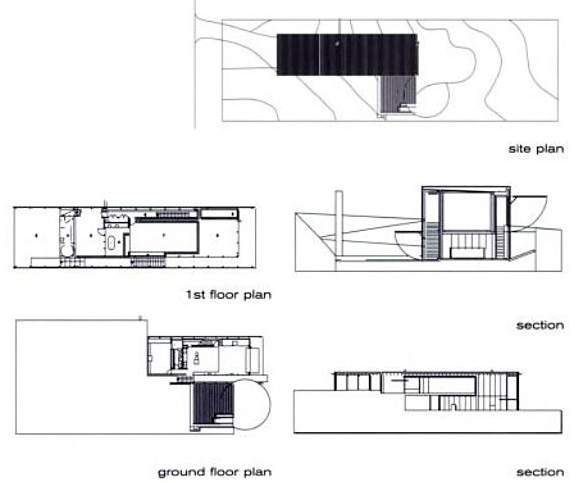 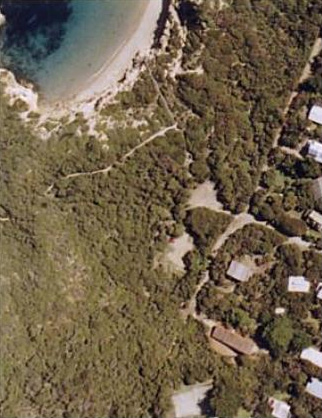 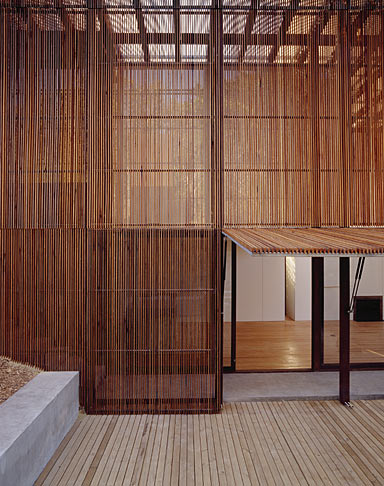 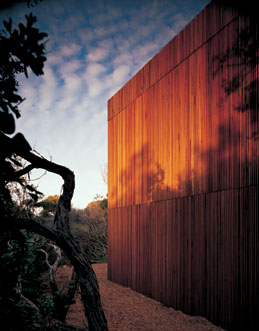 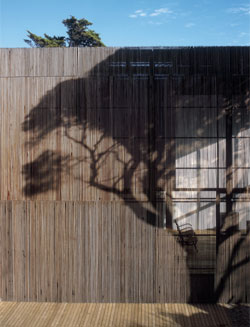 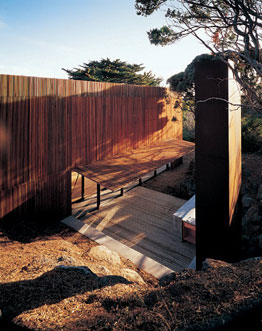 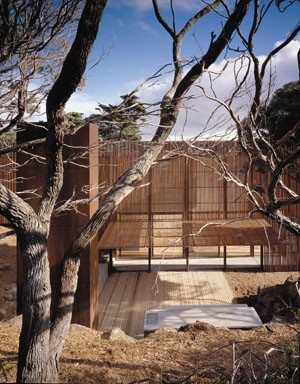 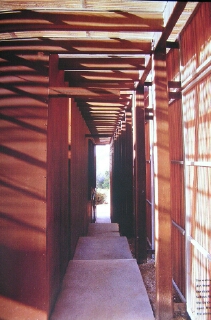 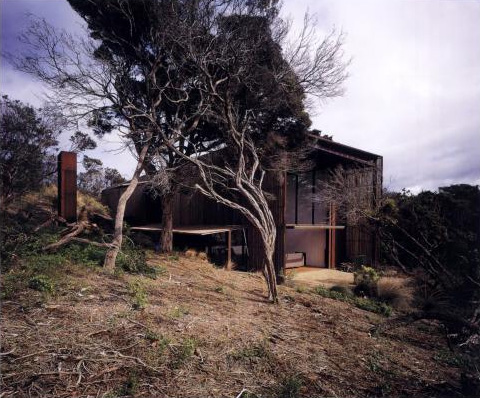 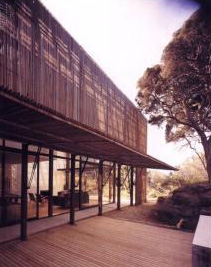 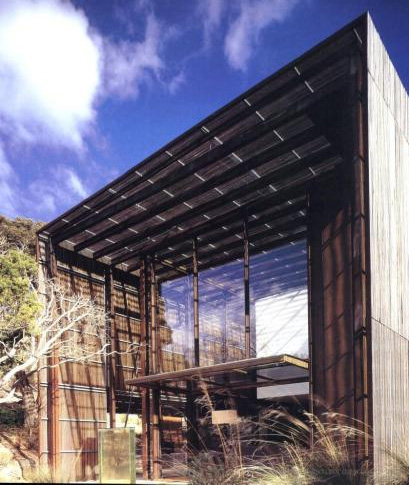 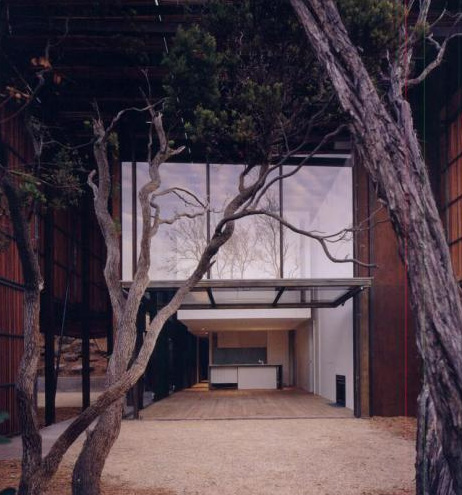