Ordo Museum, designed by architect Ma Yansong MAD Chinese study was carried out in the center of a new city of that name, driven by a booming economy of the city government. Construction began in 2008 and after 15 months of intensive work the frame of the lattice and the placement of the metal slats that recubrne the building was completed. The work was completed in 2011

The project was held in Ordos, in the Kangbashi district, a city-ups in heart steppe in the southwestern Inner Mongolia Autonomous Region, China. The museum was located next to the city library also recently built.

Ordos is located about 30 kilometers south of the city of Dongsheng, and distriro Kangbashi in Mongolian means “palaces”, is an area with thousands of residential apartments and duplexes built to house workers from nearby coal mines located on the outskirts of the city. In the urban project office towers, administrative centers, government buildings, museums, theaters, playgrounds, schools and exhibitions are also included. However, approximately one million people expected inhabit or visit the place have not appeared and the district, buildings, is in decline and abandonment.

The space occupied by the city of Ordos, built many miles away from any urban center was, until recently, one of the many steppes of the Gobi Desert. The government planmaster called “Eternal Sunshine Sunrise on the Prairies Land” (“Ever Rising Sun on the Grass Land ‘) drew and presented with a symbolic image the city, represented by a series of rigid and precise urban scenarios emerging from the central square, like a ray of sunshine, but turn a cold, empty city that was not too into consideration the people who would inhabit.

The Museum was conceived as a reaction to this urban approach, taking the form of a natural, irregular nucleus in contrast to the strict geometry of urban planning. The structure is wrapped with shiny metal panels that reflect and dissolve the environment. This shell encloses a new interior, completely separated from the urban reality.
The domed intended to contain the cultural history of the region face a rational and geometric urban fabric, settling on an inclined surface and winking to the nearby Gobi Desert.

When the architect was given the location where it should be located the project, a metal bubble that had landed in the desert imagined. Based on this idea and inspired two films took him out: “……..me inspired by the animated film The Simpsons Movie, one of whose scenes all city residents are isolated by a dome and the Second, science fiction, conducted as proposed by Buckminster Fuller and developed in Manhattan, where humans only survive under a glass dome. Out viruses are everywhere and adverse conditions…….. ”

The building, an irregular nucleus consists of 5 levels above ground featuring a built 41,227 square meters, and one underground level with 8,175 square meters, reaching a maximum height of 40 meters

Inside the museum is divided into several exhibition halls, defined by continuous curvilinear walls, all open to the shared public space that runs throughout the museum. This large central plaza receives sunlight from a height of 30 meters and is crossed by bridges that cross the great void and lead the visitor from one level to another ensuring a constant flow of pedestrian traffic. The intention of the architect was that people would give this space the treatment of “urban space”

The louvered glass roof lets in light in the room to be channeled through the building through the luminescent walls, while metal slats skin filter sunlight and provide natural ventilation. Designed as a light rock covered with a bronze steel skin color, is a building that stands out and blends with its arid context.
Yansong Ma said in an interview: “…… I wrapped this new world with a reflective metal facade, to serve symbolically protection for users. Bastane dark color this metal gives the building a semblance of calm…. ”

At the entry level, which is accessed up some wide stairs from the outside, is the large lobby, ticket office, various exhibition spaces, an auditorium, event spaces, and offices. On this floor born bridges that direct the visitor through the rest of the levels and their exhibition spaces.

People working in construction in China are familiar with traditional methods and materials, it was difficult to make them understand that what was intended was a thin metal shell instead of a substantial steel structure. In the architect’s mind a thin stainless steel shell was raised, not a heavy tank. A structural engineer familiar with the research aspect in construction and worked to achieve a structural design the way it looked was hired.

The final shape does not exactly match the original design proposed by architects because some parts were displaced 2 or 3 meters of the curve presented in drawings. In the study a complete and rational analysis of the skin of the building was done by numbering the different panels and grouping them according to plans, but once they are in the work, does not automatically workers install them in the correct position 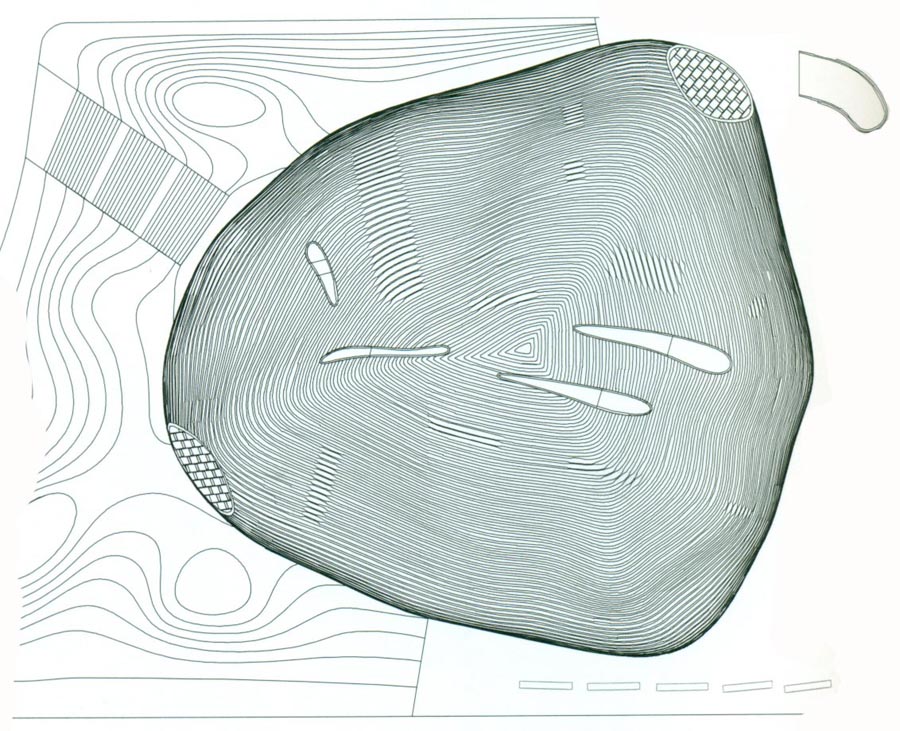 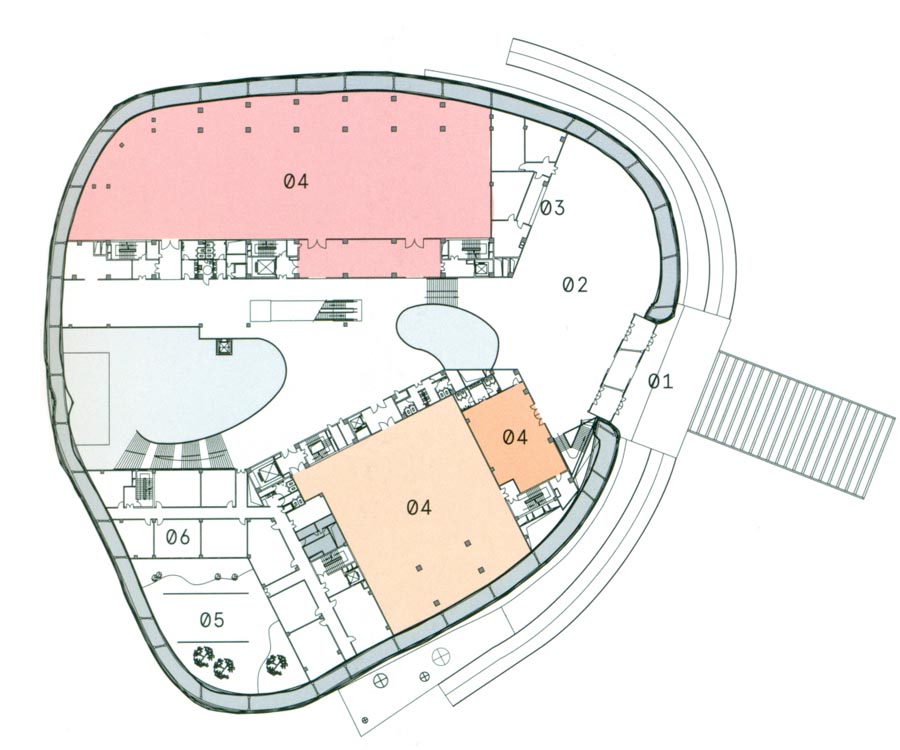 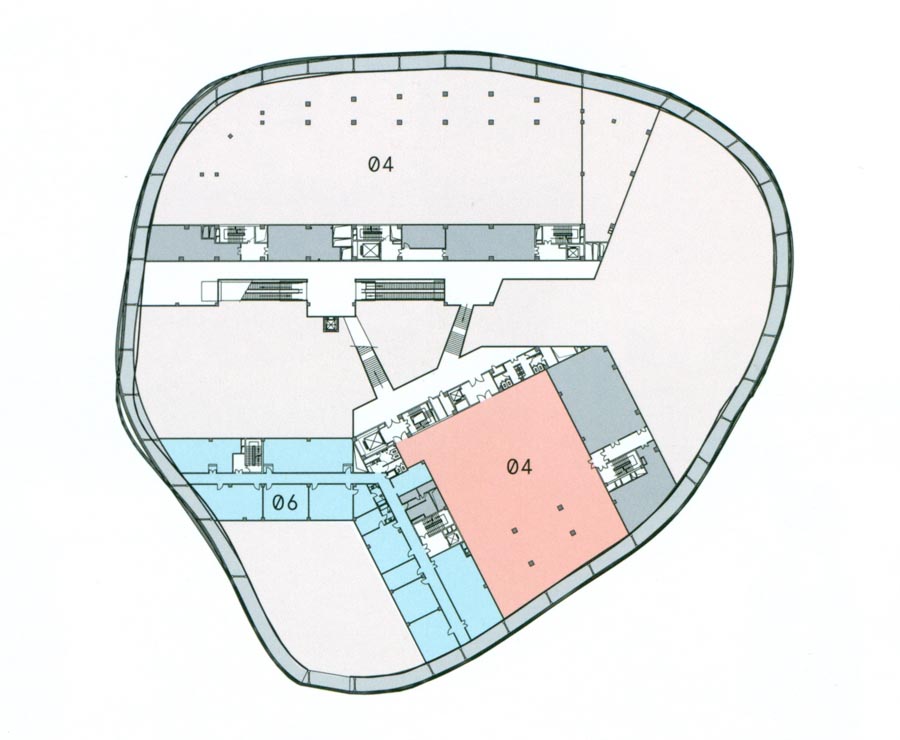 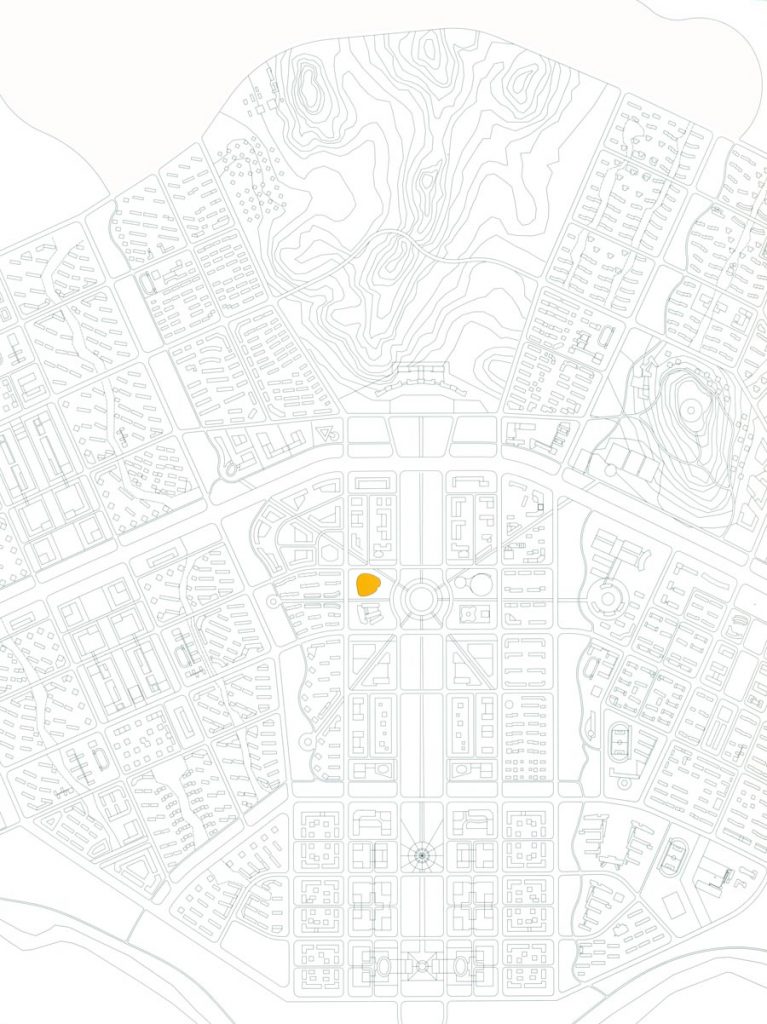 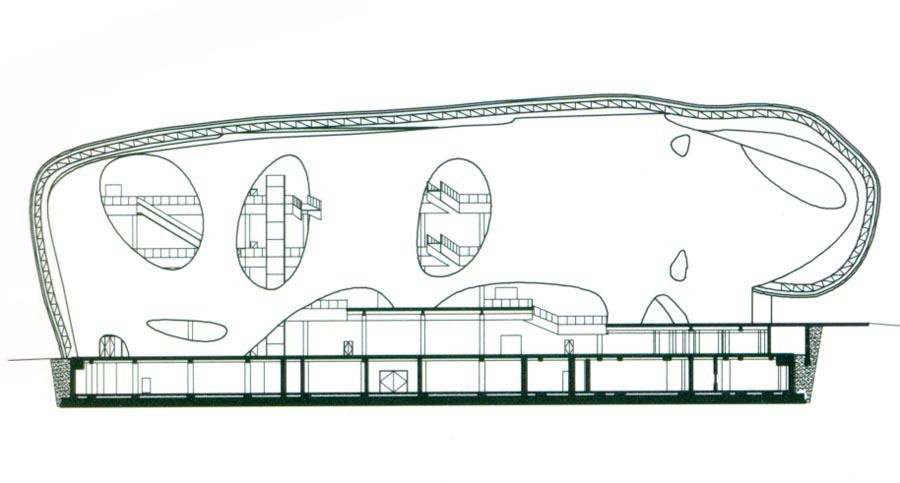 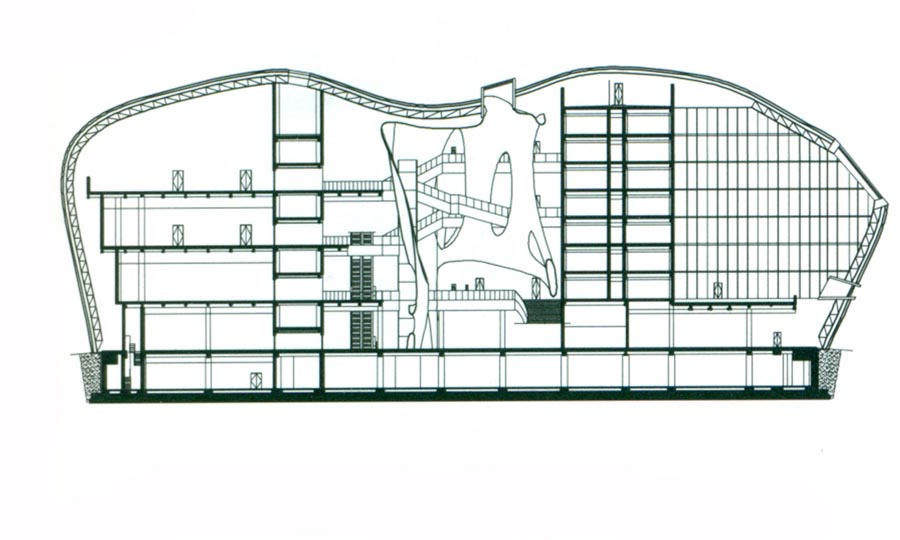 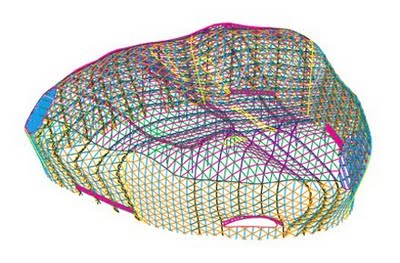 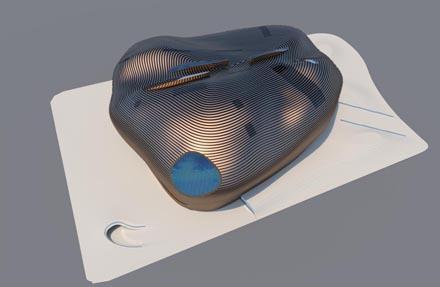 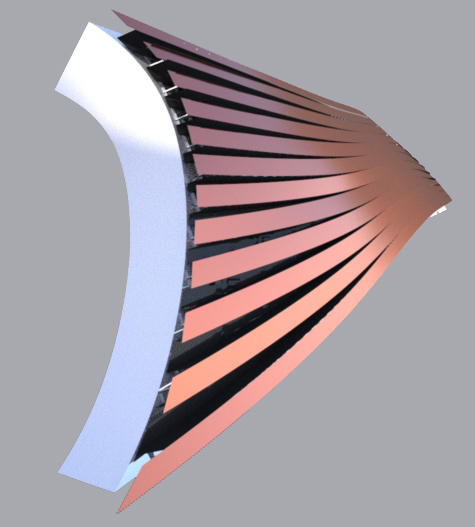 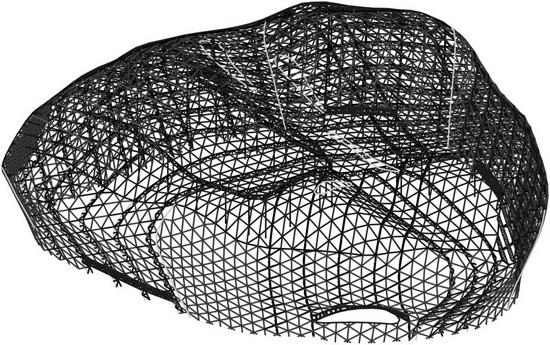 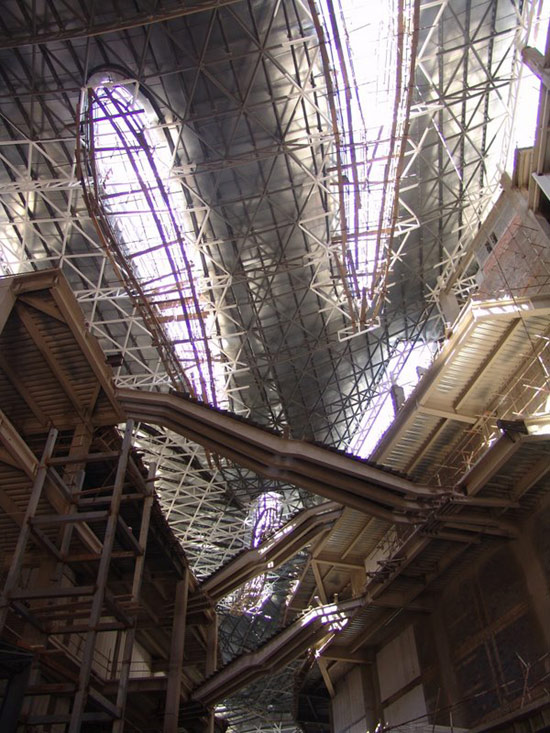 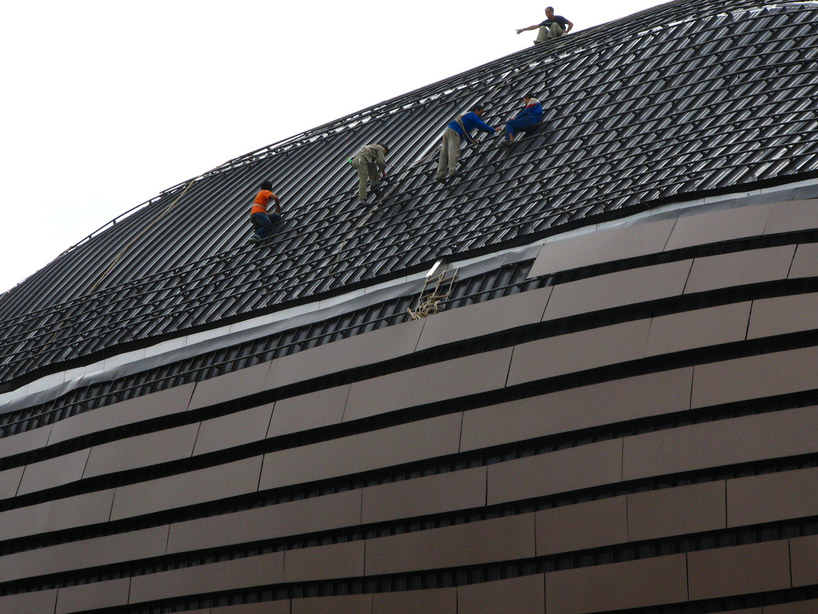 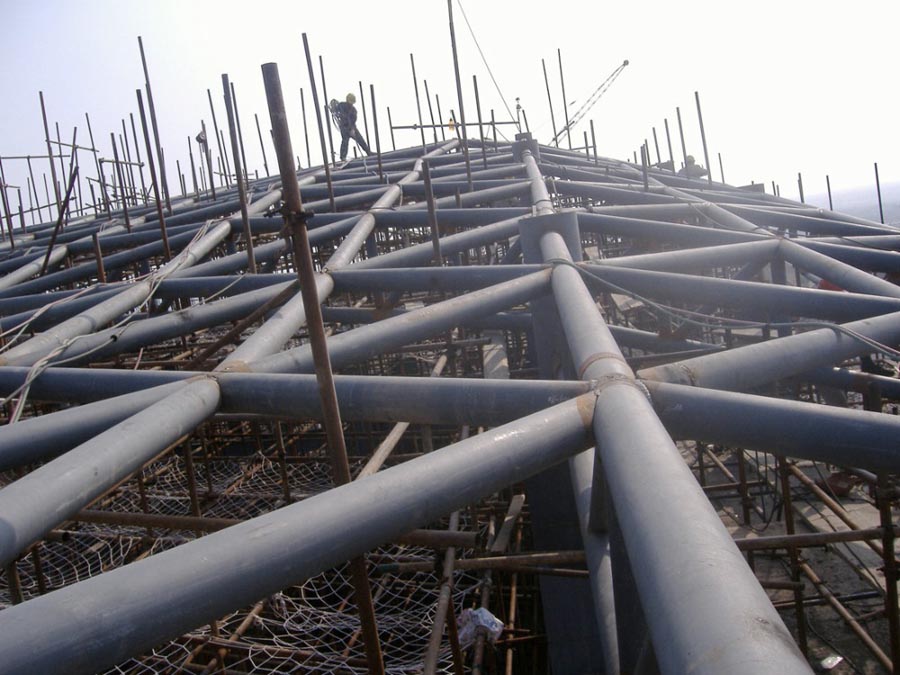 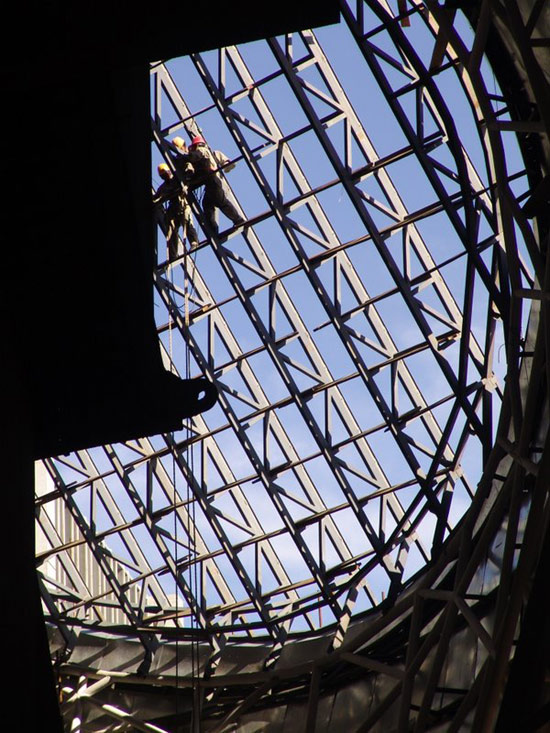 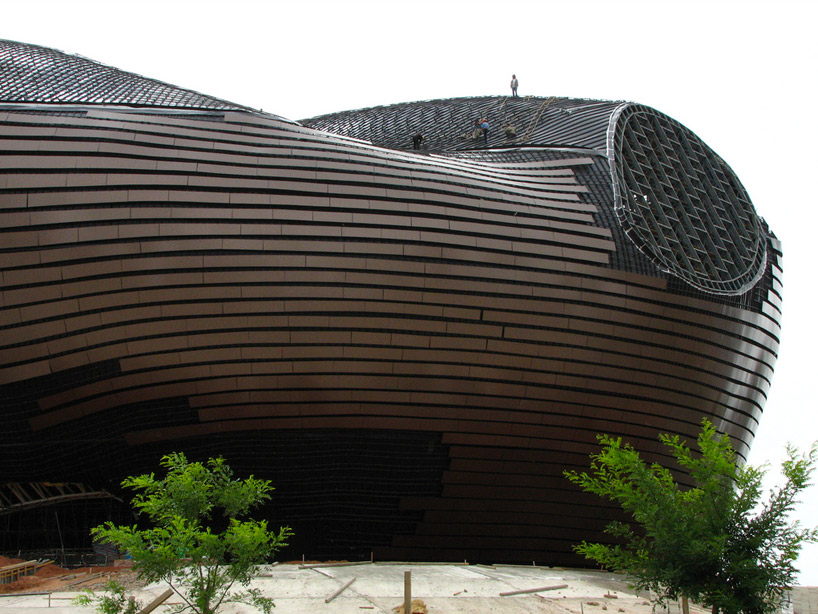 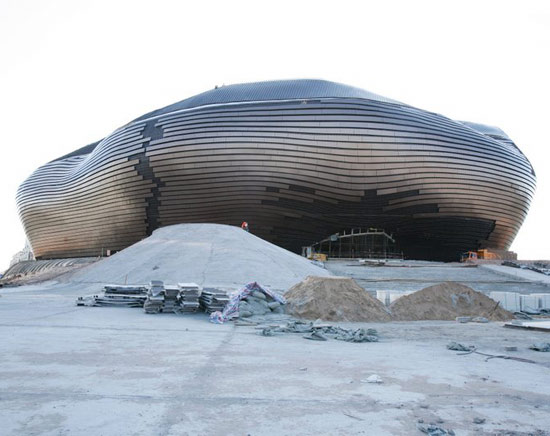 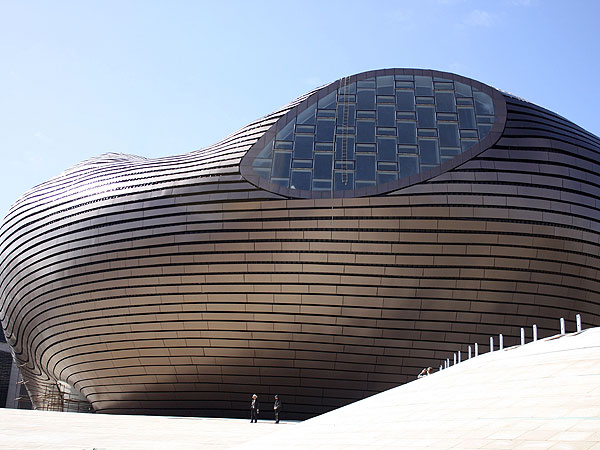 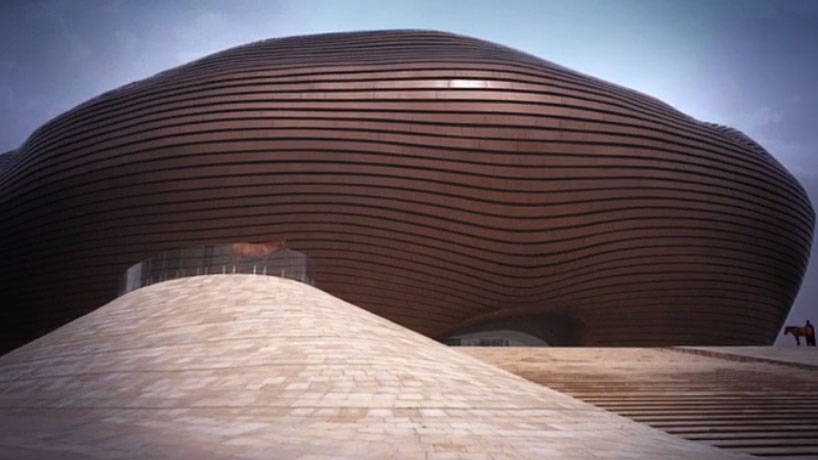 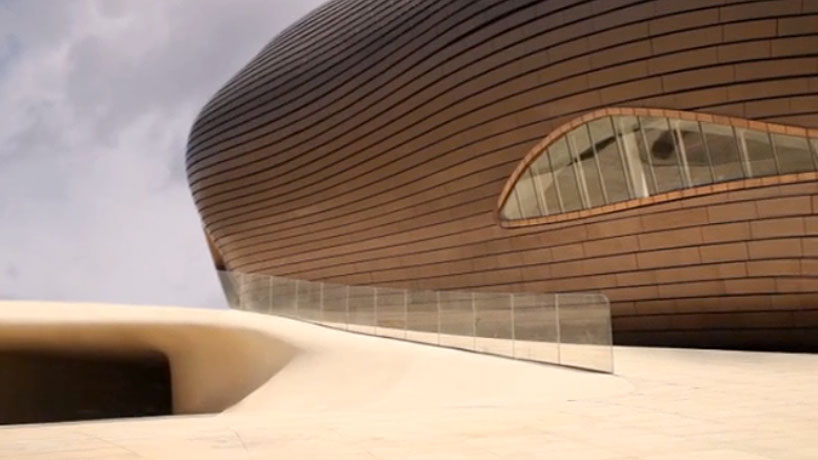 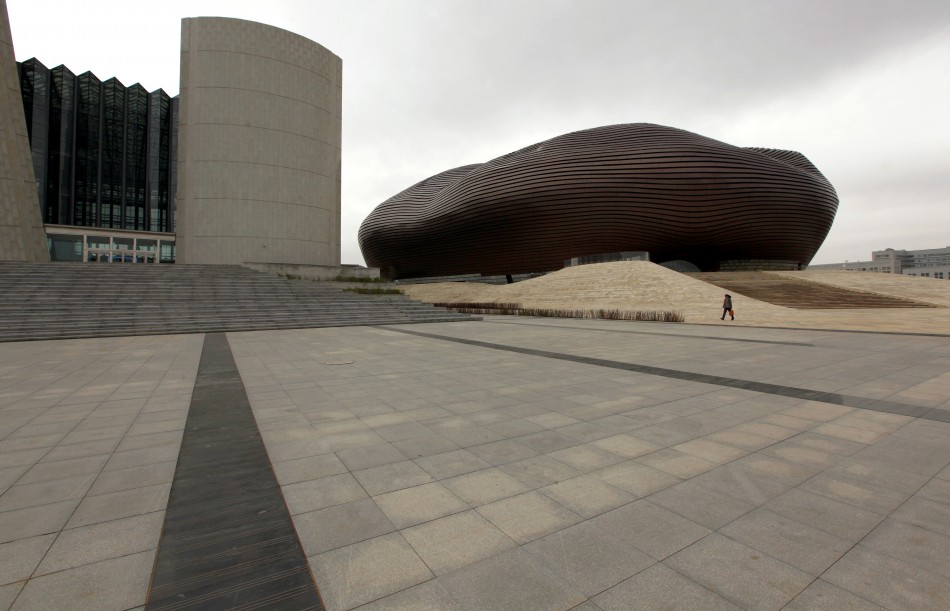 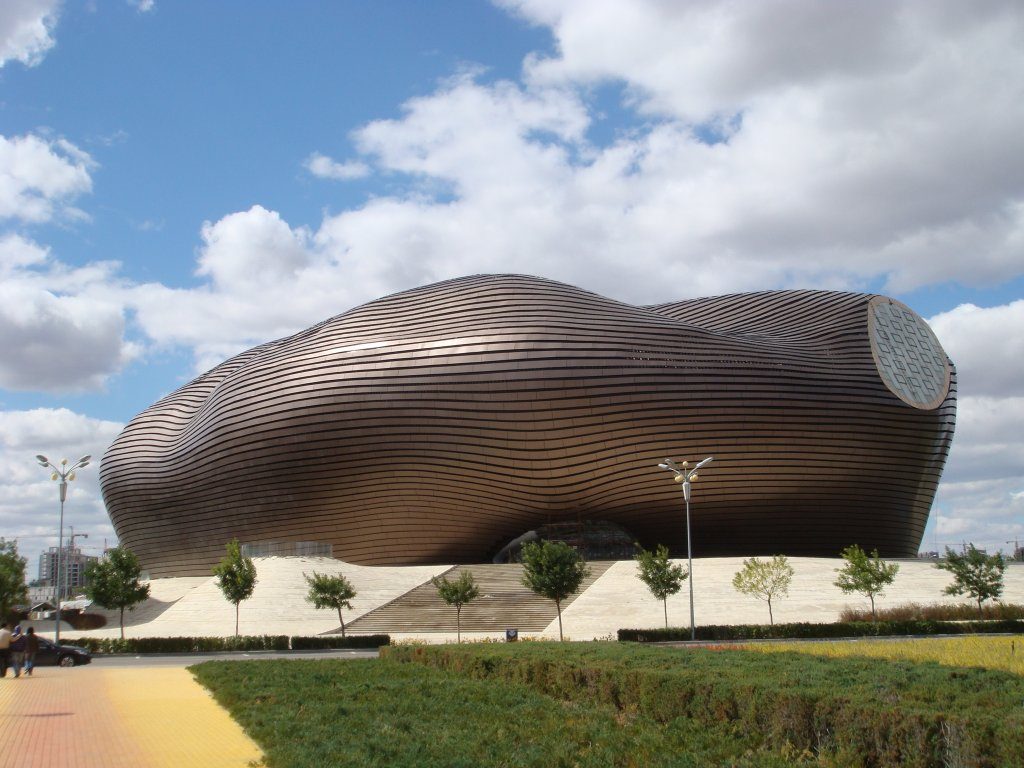 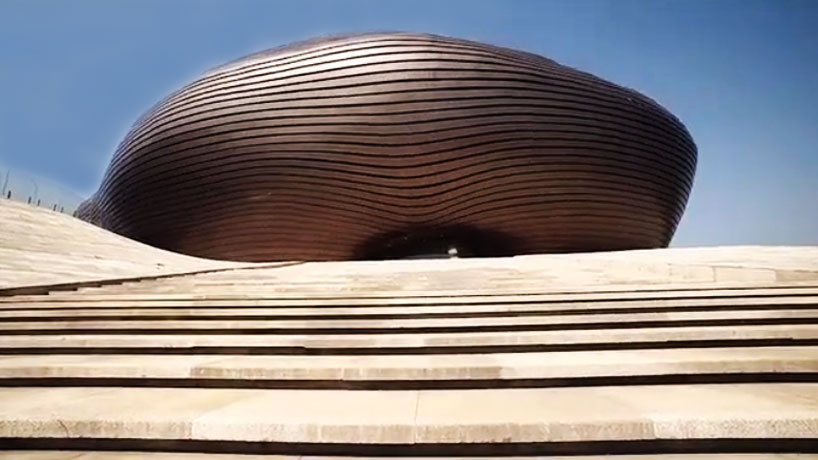 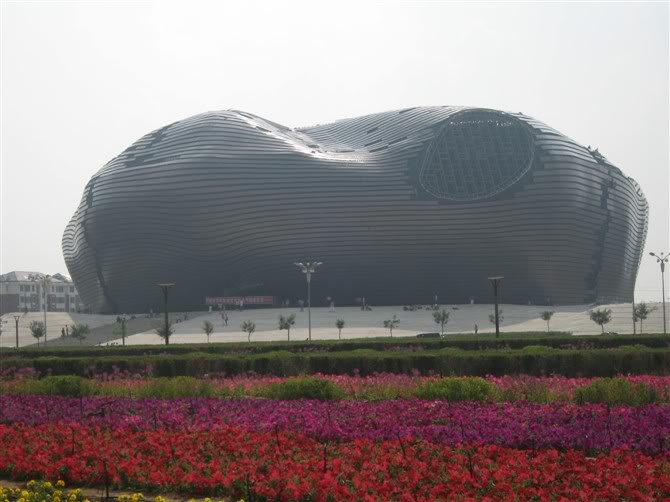 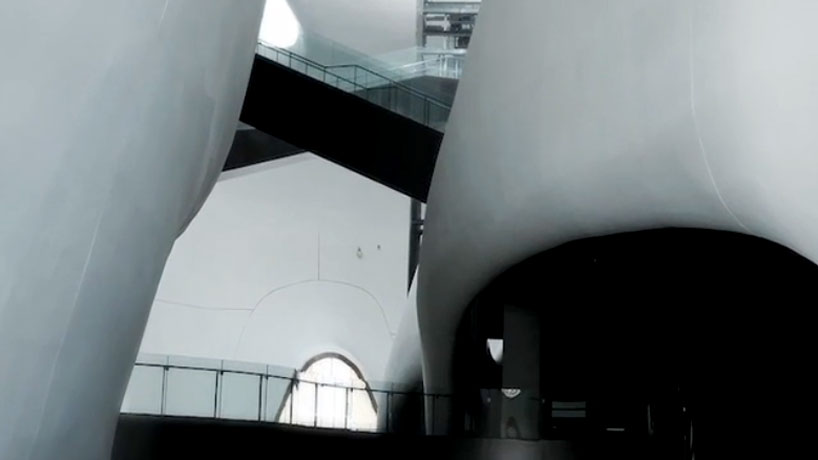 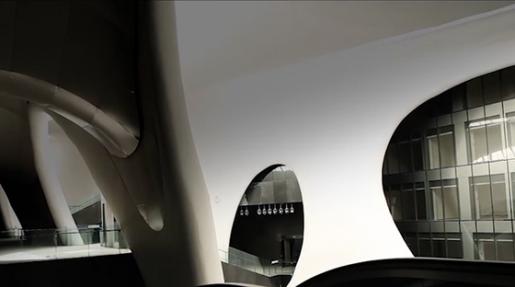 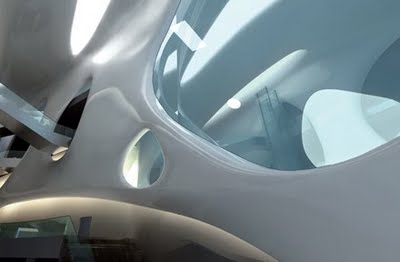 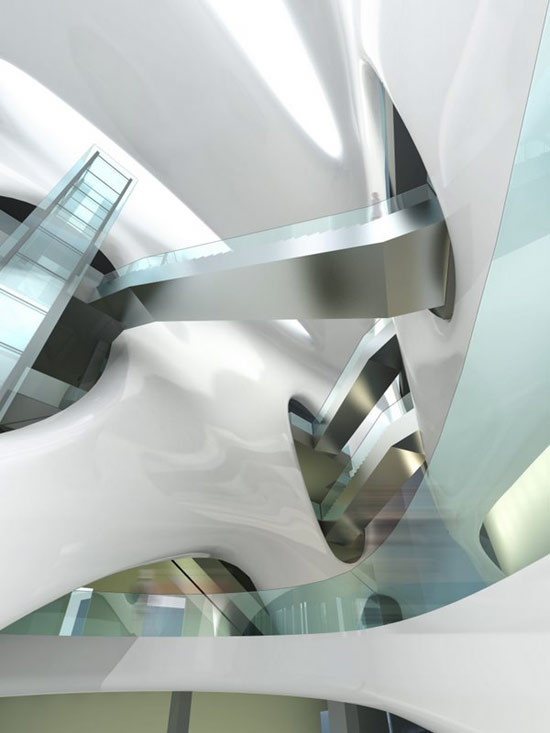 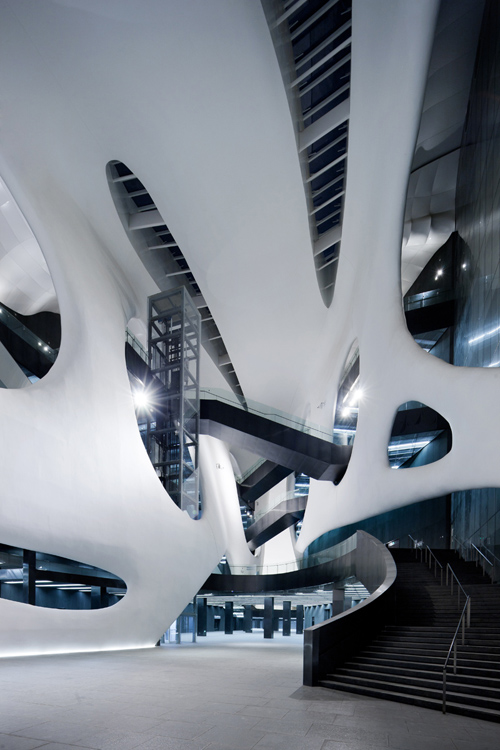