The architects Günther Behnisch and Frei Otto were in charge of designing and building the stadium would host the Olympic Games in Munich 1972. They raised a lightweight structure where tensions are nullified by a system of supports and cables, allowing both economy and new way. They pioneered the use of mathematical calculations based on computational procedures to determine the shape and behavior of the surface of the cover. Otto had to adapt their design to the preconceived form above for the winner Günther Behnisch.

In 1916, Berlin was selected to host the VI Olympic Games, but the event was suspended for the initiation of World War II. The city was rewarded in 1936 to host the eleventh edition of the Games, the last before the long hiatus caused by the outbreak of World War II and marked by notable war conditions.

In 1972 the honor was awarded to another German city, Munich, far and warlike atmosphere around the Games were overshadowed this time by a terrorist attack. When there were six days for the completion of the Games, eight Arab commands gained access to the Olympic Village, killing two members of the Israeli Olympic representation and seizing nine others hostage, the group demanded the release of 234 Palestinian prisoners in Israeli jails and two imprisoned in Germany and Egypt transfer insurance. Israel’s response was immediate and overwhelming: there would be no negotiation. That night the hostages were killed in a shootout between terrorists and police in West Germany, at a military airport.

The Olympics were only suspended for one day, September 5, to pay tribute at the Olympic Stadium athletes killed before the abandonment of the Israeli delegation to the competition.

Located in the heart of the Olympiapark München in northern Munich, the Olympic Stadium was the main venue for the 1972 Games held in this city of Germany.

The Munich Olympic Park, built for the event is in the area of ​​the city known as “Oberwiesenfeld”, “High Meadow Country” or “Mountain of Debris” because during the Second World War was a military ground It was destroyed and debris created this mountain. Currently continues to serve as the venue for cultural, social or religious events.

The first Olympic Games in Germany were held in 1936 in Berlin. For the latter to be held in Munich in 1972, Frei Otto Günther Behnisch and were responsible for teaching the world a new Germany, in a new light. Their goal was to design a structure that emulates the motto of the games: “The Happy Games”, “The Happy Games” as a whimsical architectural response to cover the heavy and overbearing shadow left by the Berlin games.

Otto and Behnisch voltage conceptualize a structure that continuously flow along the site mimicking the draping and the rhythmic elevations of the Swiss Alps, a structure suspended like a cloud that seems to float over the place branching between the pools, gym and the main stadium.

Besides the buildings covering membrane, a number of volumes also covered by the suspended surface are used as flexible spaces for stands, used during the games or any other event.

As the cover system works through the artificial landscape to the Main Stadium, the membrane begins to fade compressed to about the same. The dramatic change in the scales of the deck increases the perception of artificial floating landscape that is formed from soil, to create large open volumes again become integrated into the soil.

Although the name of Olympic Park, Olympic Park, has been used to designate the whole area in general, there is no official name for the area. On the contrary, the general area comprises four separate sub-areas:

The concrete tower with 290 meters high was the work of Behnisch, as well as the park crossed by the Nymphenburg pore in the center a small pond.
The tower, plus transmission services offers a revolving restaurant every half hour makes a complete rotation on its axis, with capacity for 216 people.

The construction of the stadium for games, work of Frei Otto, was the most important and the most impacted worldwide. Shop transparent campaign consists of three structures that became a landmark for the city center. The stadium has dimensions of 105x68m capacity for 69,250 spectators, with a grassy field surrounded by track.

The roof of the Olympic Stadium in Munich, which covers and unifies the stadium, tracks and pools, was developed based on the use of computerized mathematical procedures in determining their form and behavior, resulting in an architectural form of “minimal surfaces “first used in voltage covered with these dimensions, 74.800m2.

First, the metal frame, whose small spaces were coated with PVC, created numerous minimal surfaces and as such was also minimal weight, allowing the construction of an architectural cover lightness.

Second, the surface tension of these forms is completely balanced, providing very stable construction.
Away from the rigid orthogonal patterns of modern architecture, minimal surfaces have organic forms of extraordinary elegance. Is elegance eye view as far imposed on the medium, it suits him.
The surface of the DC voltage that connects all the main buildings of the Olympic Games is subject to a structural hierarchical system that creates a series of volumes through the site. The cover membrane is suspended by a multitude of vertical masts enabling sharp bends winding surface draping dynamically changing flow through the space so, scale and sectional characteristics. Large decks are stabilized laterally through a network of smaller cables that connect to a cable largest steel that extends over all space within the concrete foundation each end.

The numerous “shopping” and “umbrellas” ceiling raised in Munich, were the culmination of many years of experience in the field by Frei Otto. However, at the Olympic Stadium scale was far superior to any other project not only had to put erect a large deck, but that it should be linked to their different “stores” all main areas: one side of the main stadium linked to the Olympic Gymnasium and Pool Deck, the latter completely covered areas.

The roof of the main stadium is a polyester fabric coated with PVC suspended independently in each of the cells formed by a network of prestressing cables. The masts support the main cables maintained in tension by providing the necessary hanging roof surfaces support. The masts are responsible structural elements transmit loads to the strong hand, and do so in an inclined manner. The junction between the various cables that make up the structural mesh is materialized by a knot of steel casting with a system using bolted anchors and tensioned. The textile cover designed by Frei Otto, occupies 74.800m2, of which 33,750 m2 are the Olympic Stadium, with a length of 450m.

These wire meshes are held by straps that start from the heads of the outer masts, straps and cables anchored to the ground edge. The geometric precision cut patterns and prefabrication required in the project forced the development of new computational method, of particular relevance in the “Architecture HighTech” and a revival of cast steel in structural engineering using molds polystyrene.

It took large pipes and steel cables to lift and keep in the air the structure on which the canopy would be supported. The cables ranging from 65 to 400 meters long

The enclosure of the structure consists of a sheet of PVC-coated polyester, 2.9 x 29 m and 4 mm thick. To avoid deformations due to temperature, valves rests on neoprene. Although great technical problems were solved, was not possible to completely solve the heat insulation

Because of the precision in the calculations of the structural system and the membrane, these elements were manufactured off-site construction. The high precision allowed easy assembly for one of the most innovative and complex structural systems that have been worked only with the premise of stress. Even after nearly 40 years of construction, the structure of “tensioned store” is presented as it did in the 1972 Olympics, lines, shape, structure still create awe. 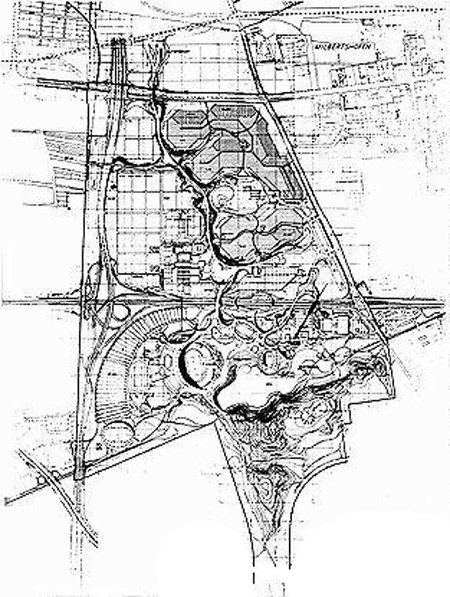 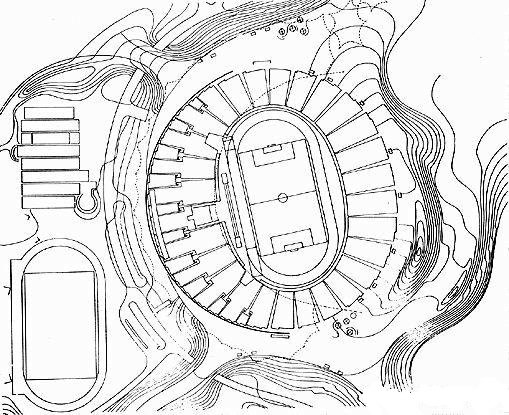 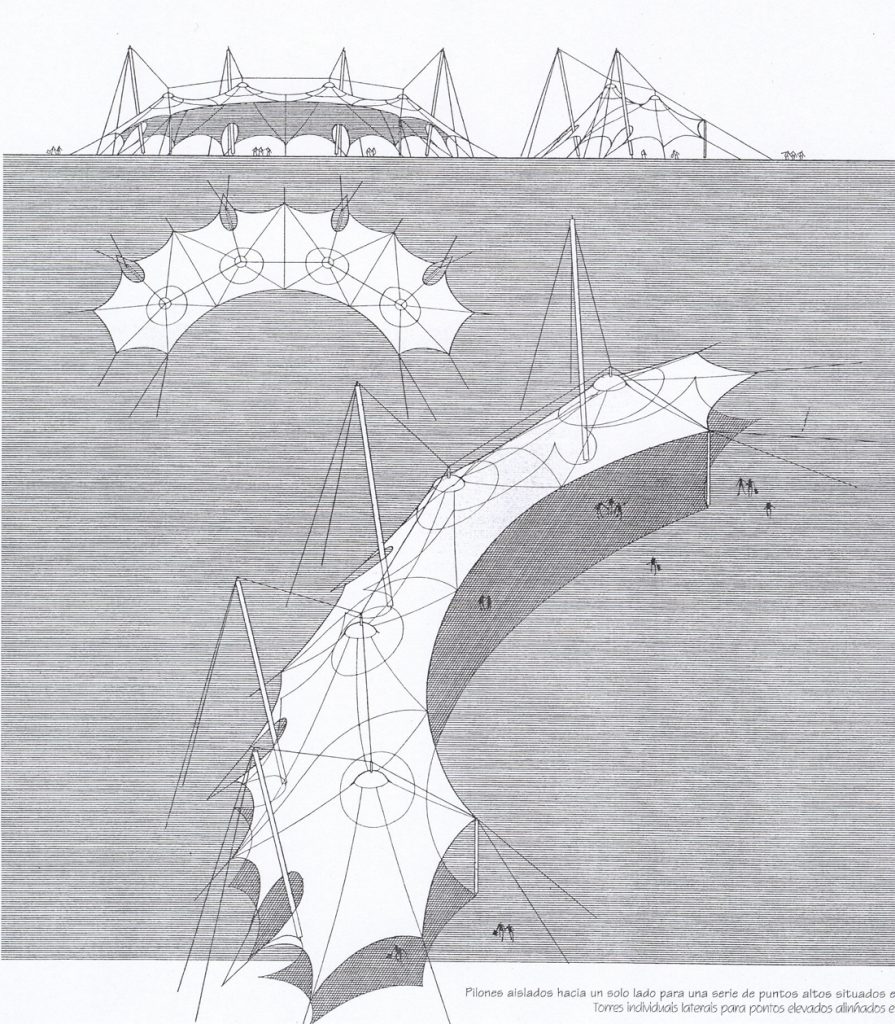 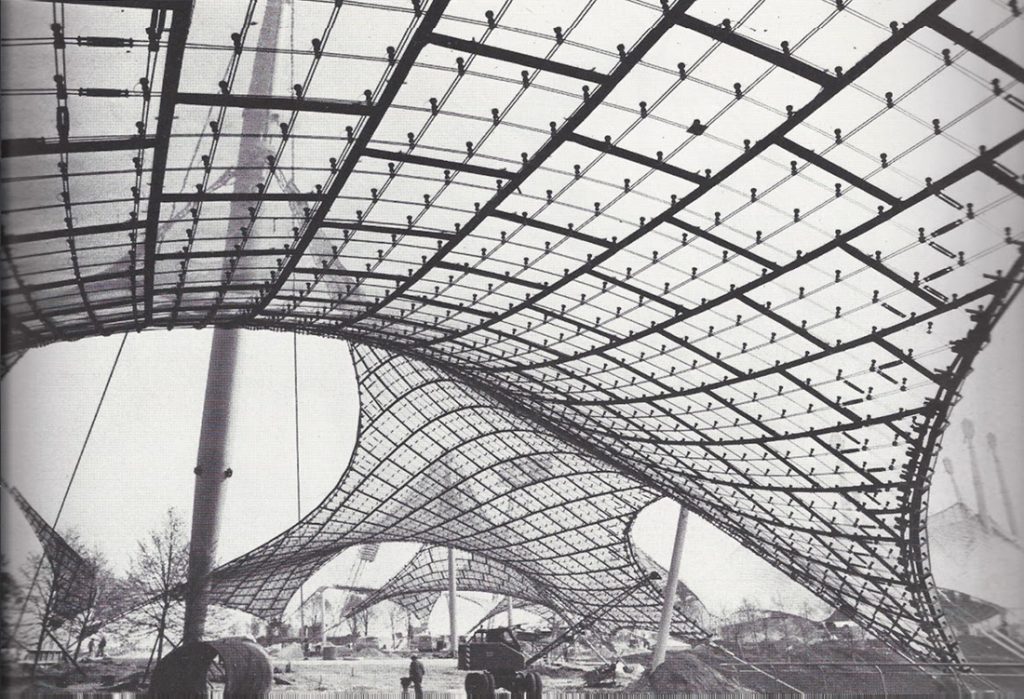 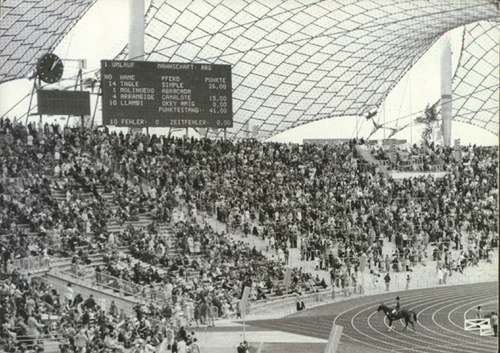 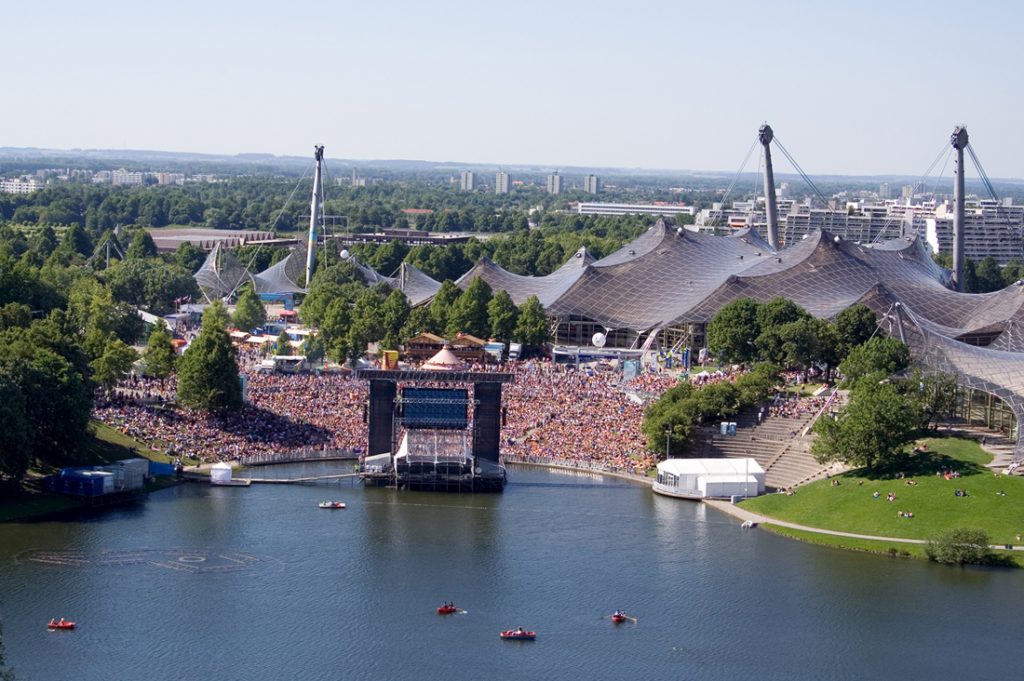 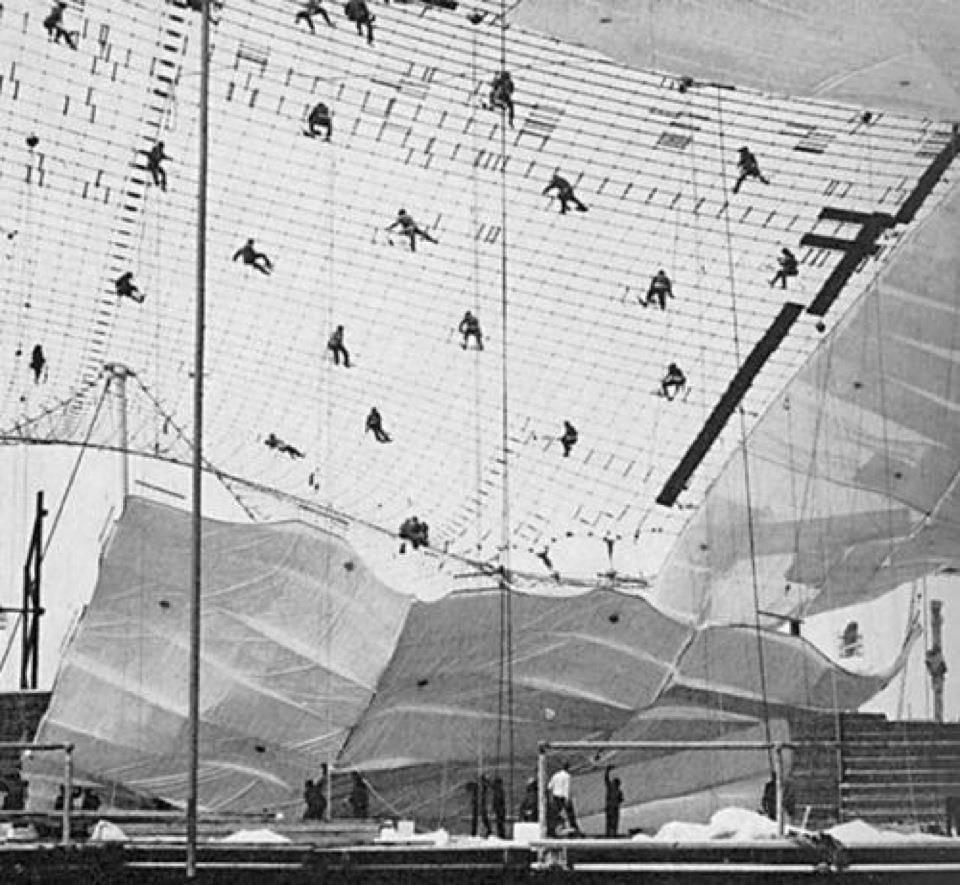 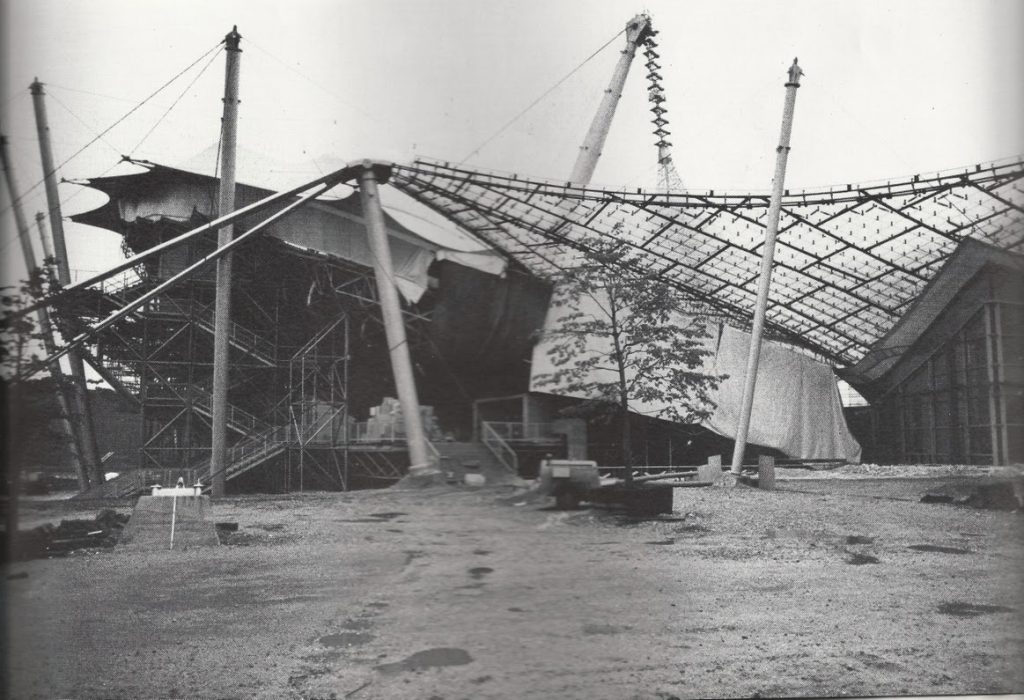 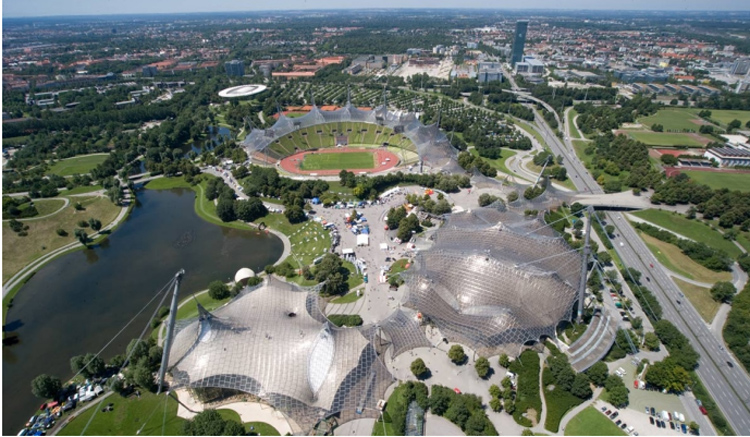 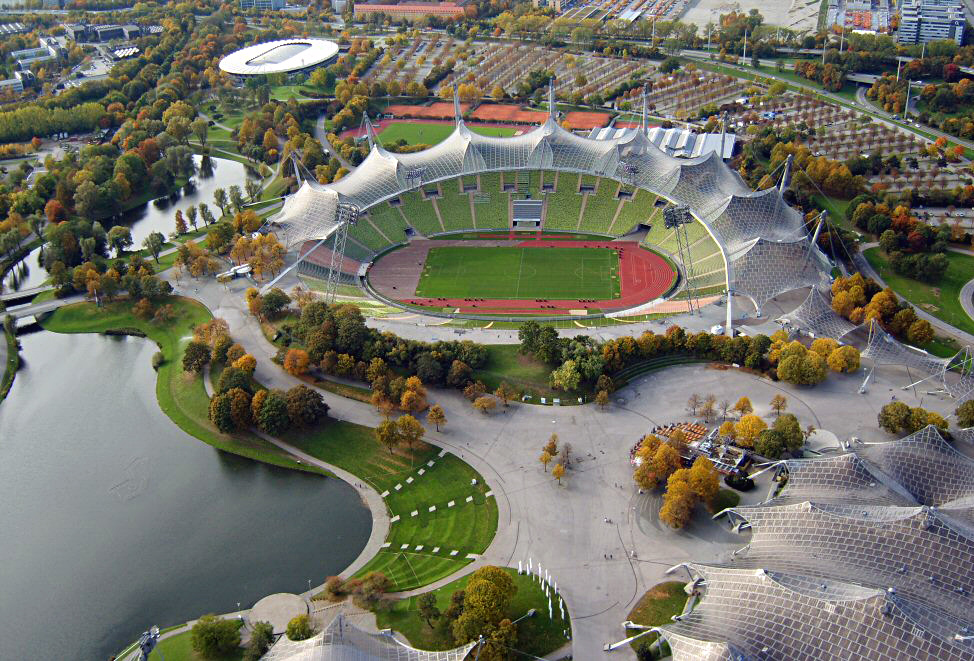 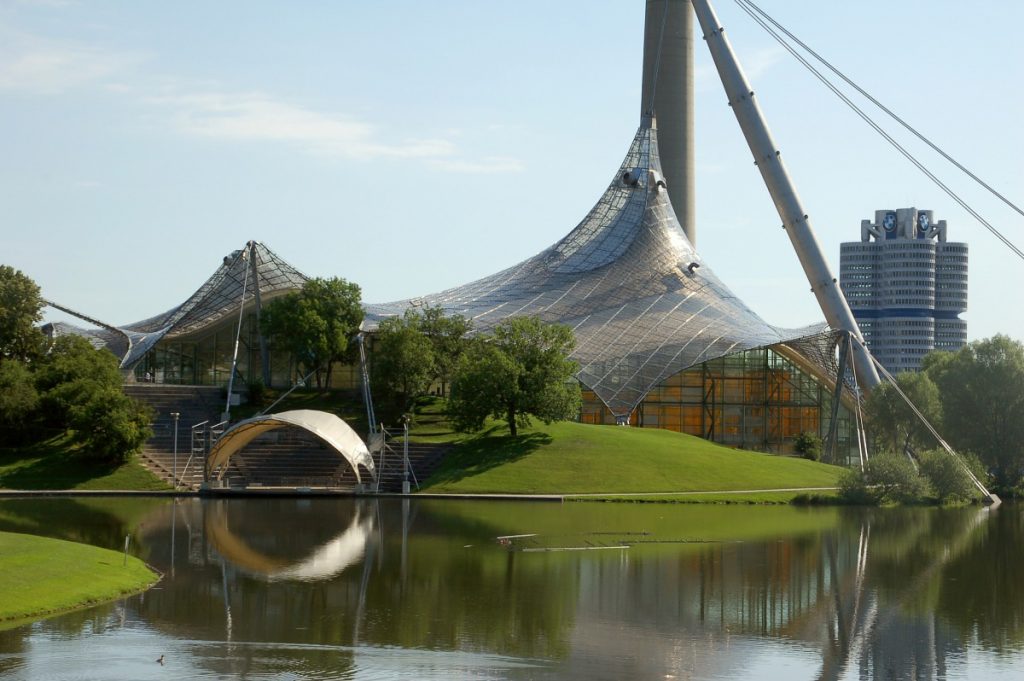 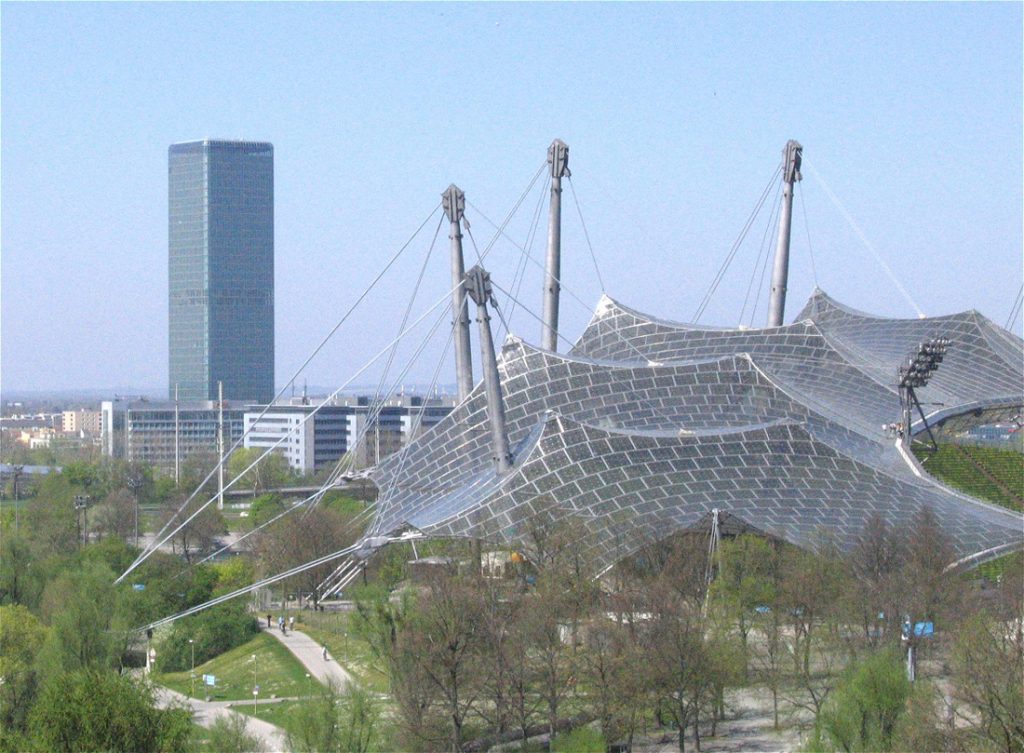 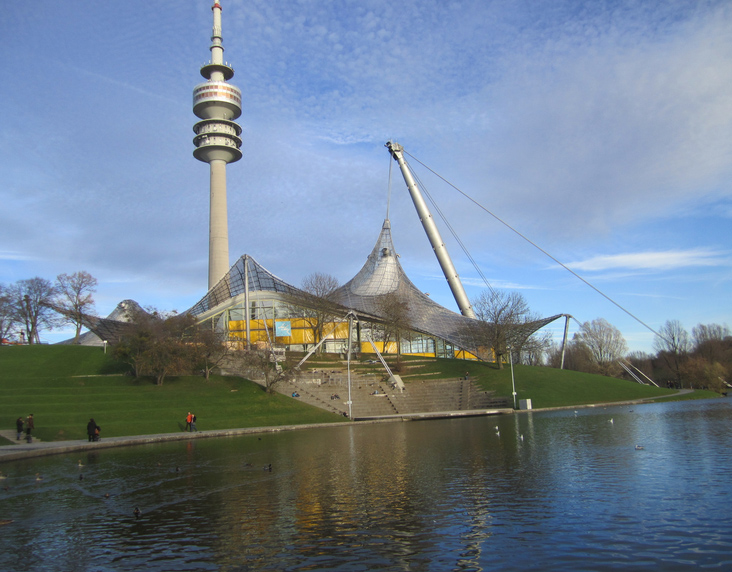 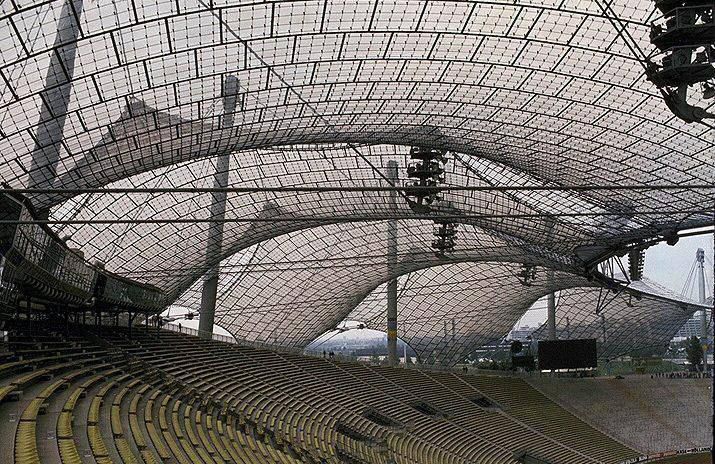 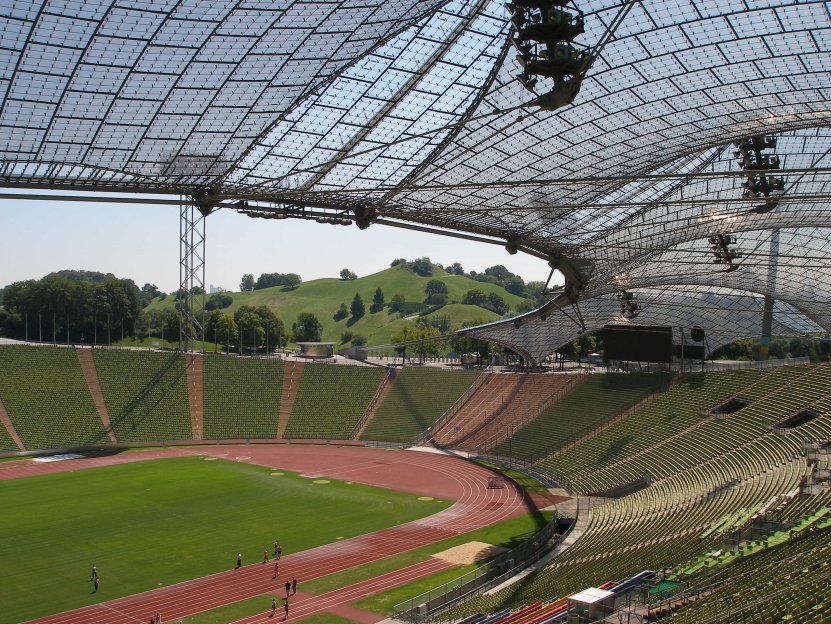 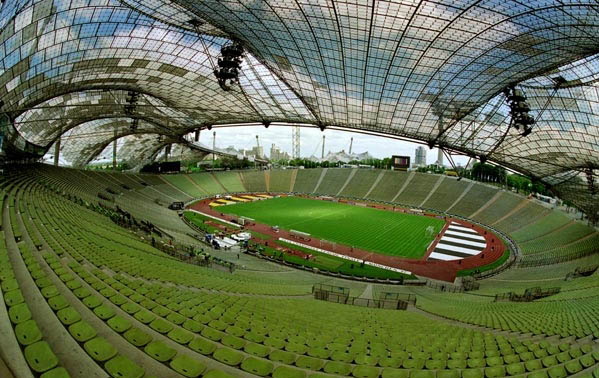 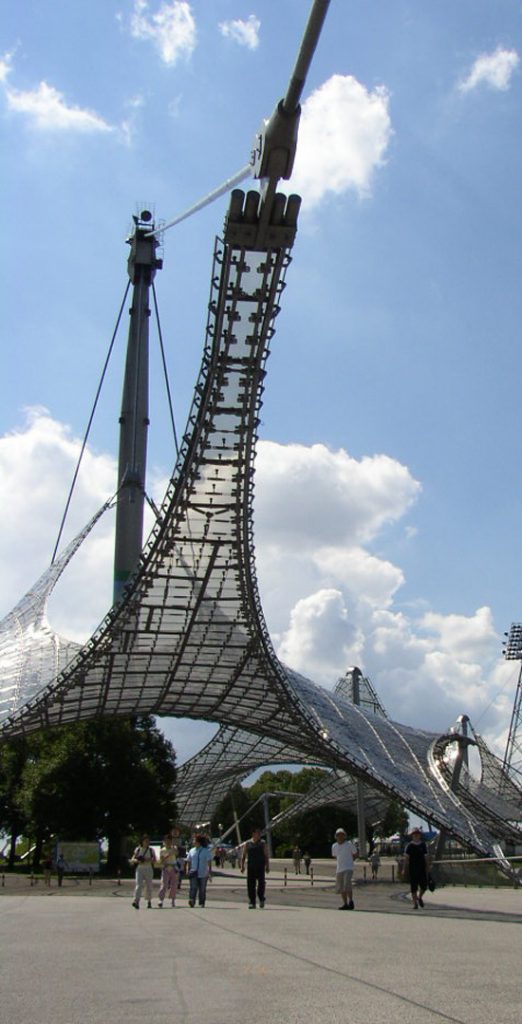 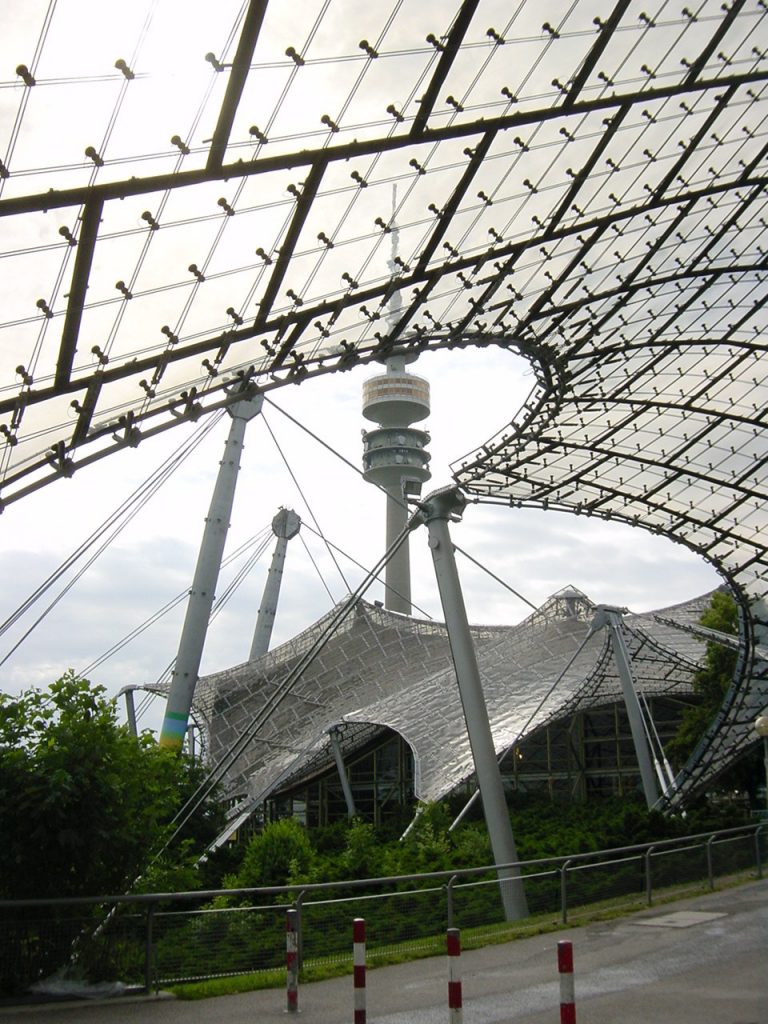 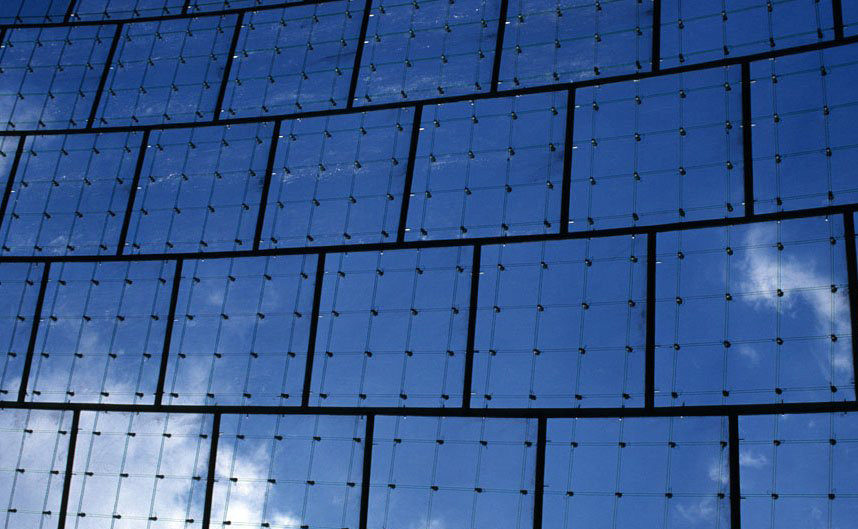 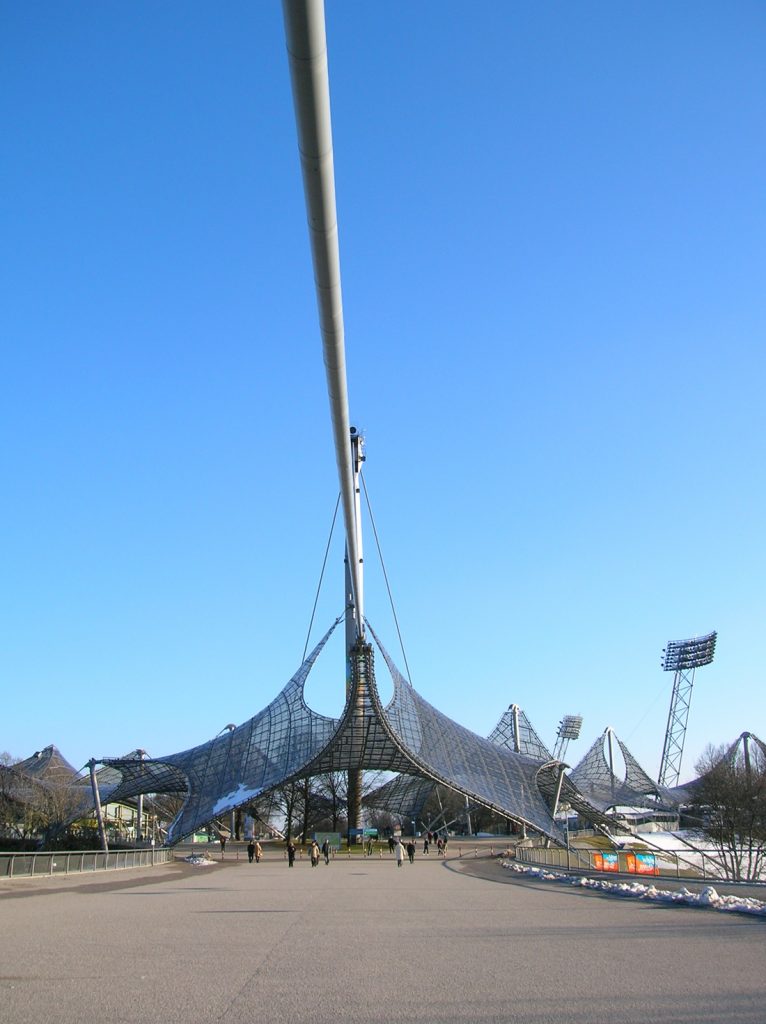 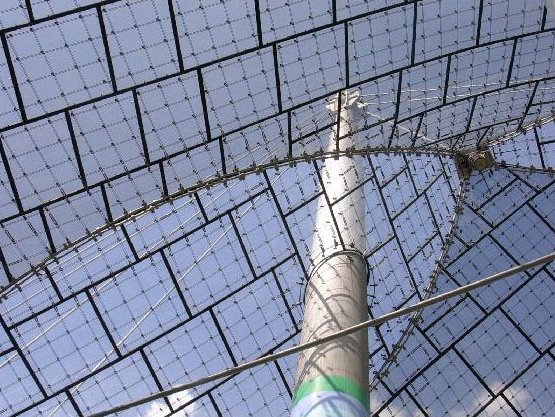 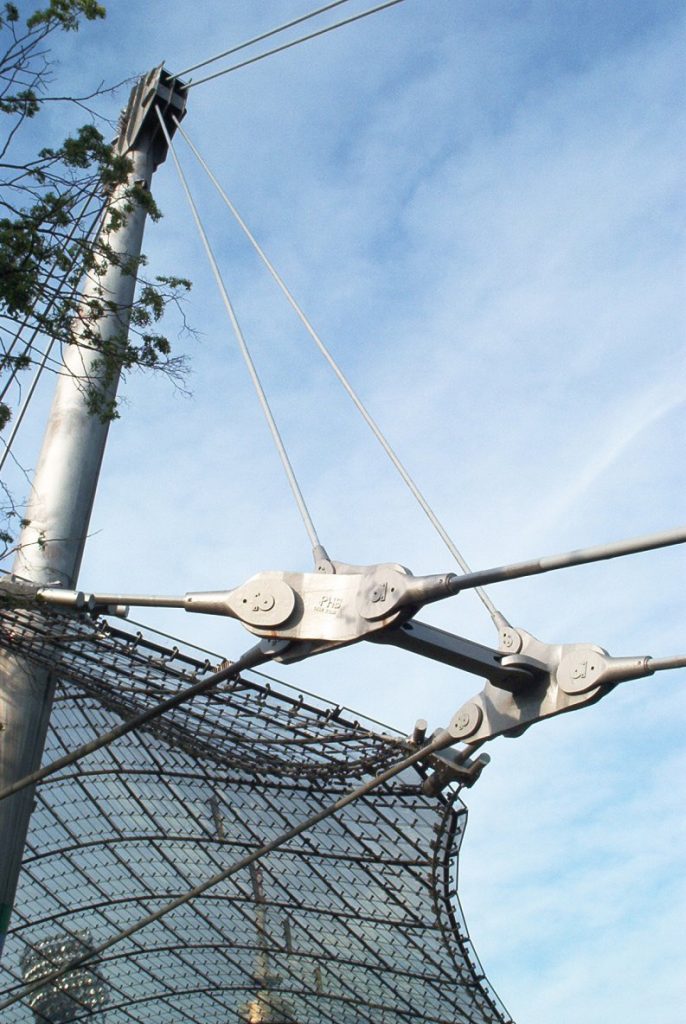 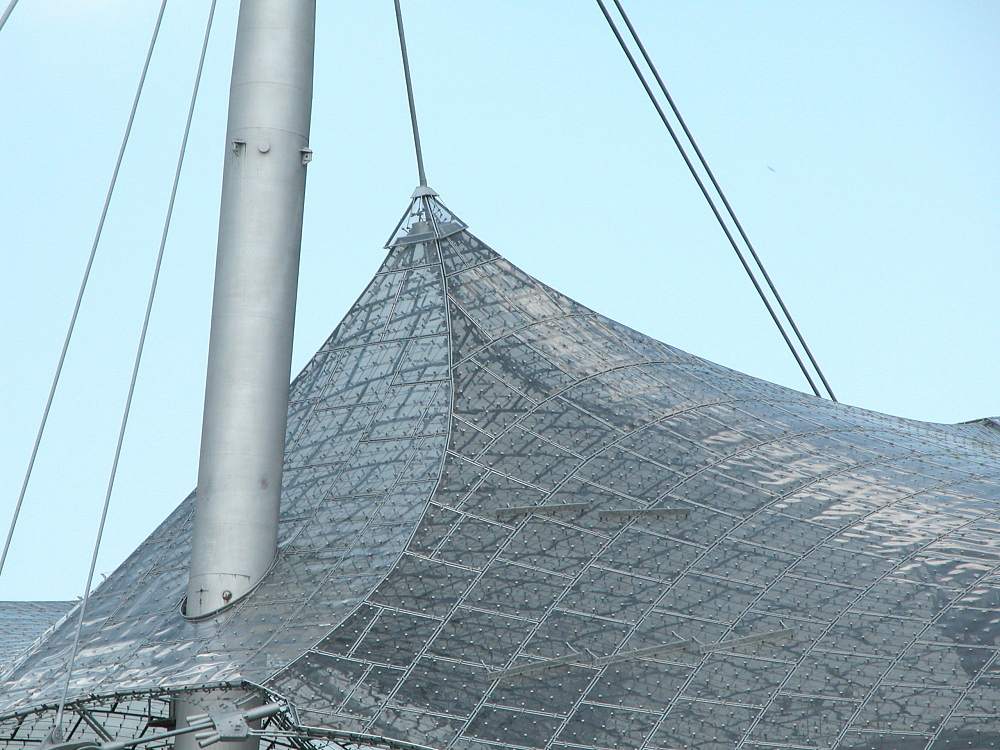