In the streets of Mexico City, in a narrow elongated area of 10×36 meters, three walls and a mediator to the front line municipal, Barragán, its 80 years of age and after almost 10 years of inactivity, makes its last work, perhaps the most paradigmatic of all.

The house is located within the Federal District of Mexico, in a village called Tacubaya, which is well known and has mutated throughout the years, however it appears that the neighborhood was not what attracted the architect.

Barragán accepted the job two conditions attracted by the project: the huge Jacaranda tree that should be kept in the sun and pool requested by the owner as part of the program.

In fact the house is so close to the street and strengthens it.

The universal message of Luis Barragán capital has answers because, as he said: “… the man has always sought to protect themselves from anxiety and fear. He tried to promote living spaces in your mind the serenity…” since, as also found by others to explain how generous: “… we have worked […] in the hope that our work […] cooperate in the great task of dignifying human life by trails of beauty and help to build a dam against the waves of dehumanization and vulgarity. If, at our work together in achieving some of these concepts do not succeed in solving the problems of man, at least cooperate to make your life fuller, more beautiful and more bearable and help to avoid the despair… ”

Reflected in his works around the baggage of modern concepts and also the dialogue with the environment is fantastic. The colors, textures, compositional elements are a product of Mexican culture. Certainly the influence of painters such as Diego Rivera and Frida Kalho, among others, in his works, but particularly in this house.

With respect to the use of colors in an interview said that: “In my work as architect, the colors and the lights have always been one of fundamental importance. Both are basic elements in creating an architectural space, as they may vary conceptions of it. The walls are made to re-paint. I think that every two years due to all the work to repaint.

In this work, Mr Gilardi, colors play an important role. The patio is purple color, very vibrant. The broker prepares the journey through the house to reach a very important area: the dining room with a pool deck. Suddenly, the pond comes a pink wall that cuts off the water and almost reaches the ceiling.
The wall gives way to space, he does magic, creates some tension. From the roof a linternilla light bathes the wall, and emphasizes their role.

Indeed, the pink color of the wall as the blue surrounding space were taken from a famous painting by Chucho Reyes. It is a rooster, then went magenta and turquoise. “Chucho Reyes had an excellent eye for color. He dedicated his life to the beautiful things. Planes did not understand, but I helped with the color. The color of the Mexican market… the color of the Mexican candy… of confectionery… the beauty of a cock.
We set the colors for the house painting Gilardi great cards in my house, surcharges one after another in the walls, instead of moving them, playing with them until we decide the colors accurate.
I will tell you a secret: the pool wall or column is a rose that does not hold anything. It is a piece of color in the water for pleasure, to bring light to the area and improve their overall ”

Ordered on an axis along the ground, that slides with a small urban impact on the outside and intimate inside. The small but powerful volume rose defends the street and poured the interior, decomposing into the small courtyard formed by both the front volume (services, dormitories) and the rear (dining-room-pool) both linked by a corridor magic. Anything set around a courtyard to a beautiful tree, which should be respected as a condition to the owner, which highlights their branches or flowers senior monastic paintings.

The provision in plant gradually discovers cracks through filters light and silence. A world of sensations: single entry, the hallway is broad, stairs without railings and is levitated by the effect of daylight, we have an exciting runner invaded the soft yellow light that is filtered by a series of vertical openings with glasses onix color, at the end of which a door leads to an austere space that contains only a small stretch of water, a rustic dining table, chairs and a sideboard, while a disturbing red wall and skylight bathes the subject pool the rest is all light.
This pool-dining-being, the center of the house, becomes a magical area where the soil is broken into a silent passage between the solid and liquid, because the dining-be installed along the water, and pink wall, which plunges into it, it vibrates with the geometries produced by the changing daylight that is transforming the area throughout the day.

With few references to the outside world, the house displays on the inside to be enjoyed by attractive housing, affirming its introspective nature. The environments look to the enclosure interior through large glass surfaces.

The tree has its space, but not an actor, but a complement to the whole scenario which is in solar vacuum.

As a homeowner between party opted for a traditional structure of bearing walls, with the local grid, subdivided according to proportion of each environment. Load-bearing walls are cut into the main facade of moderate openings to the street. A subtraction in the second floor creates a terrace bounded by high walls that protects the street environments that are located there.

The house is built entirely in brick covered on all exterior stucco finish with a texture that is typical of the Mexican labor. The interior painted, have a much smoother texture so that the light took over the place without shadows roughness. In this way, nearly blinding brightness is achieved for example in the main hall where they are located a few cracks with onix glass shade. 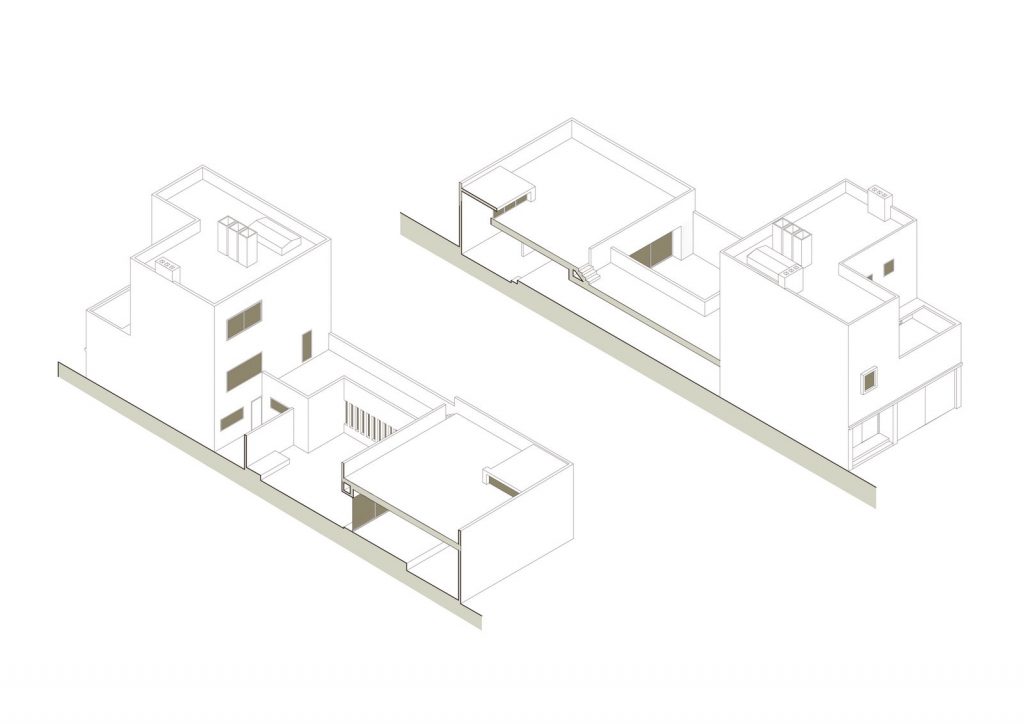 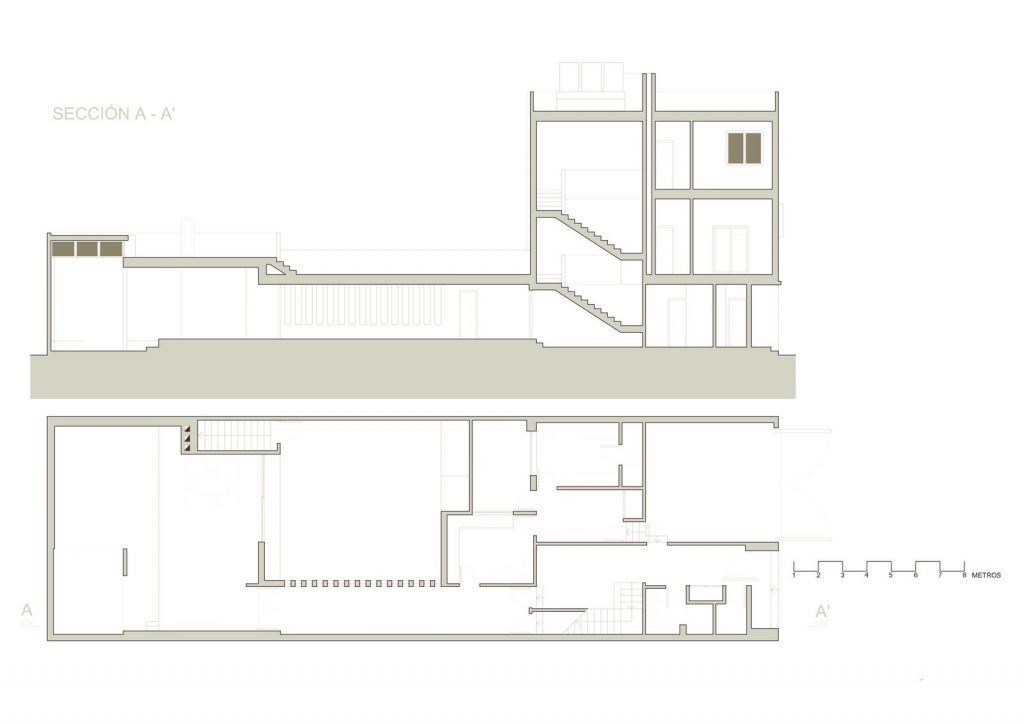 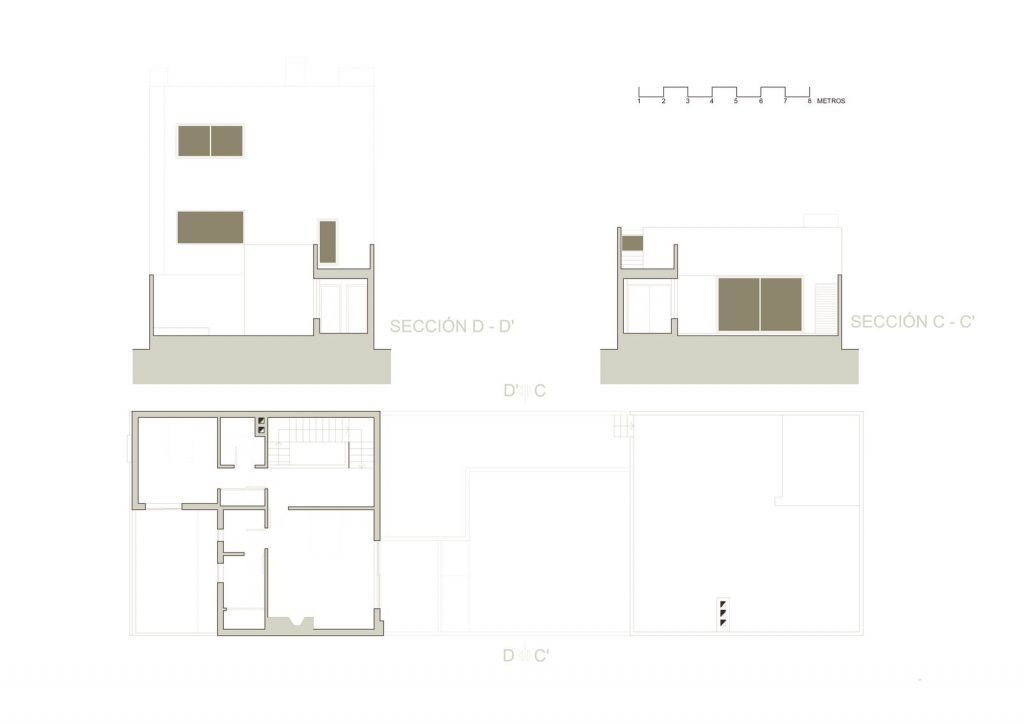 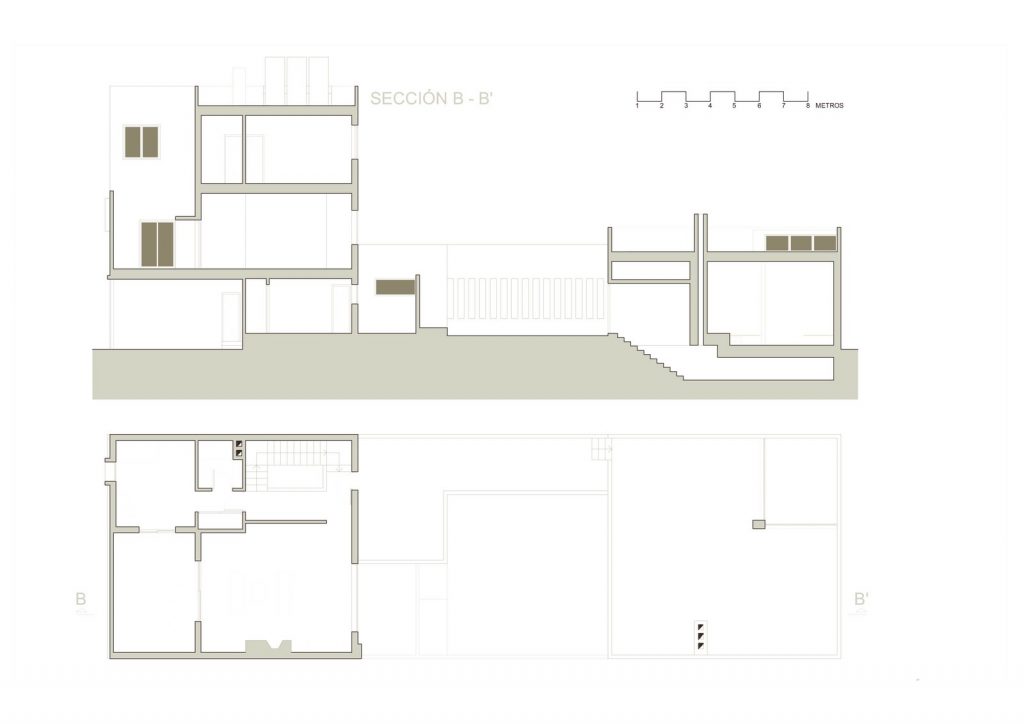 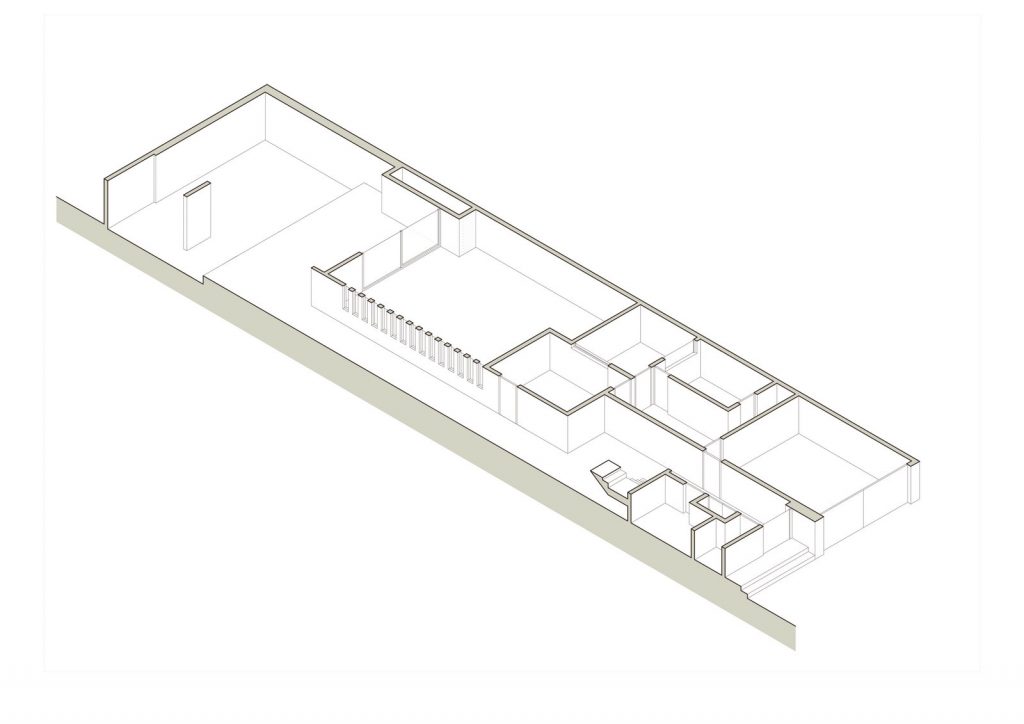 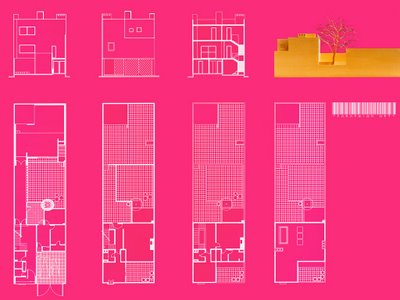 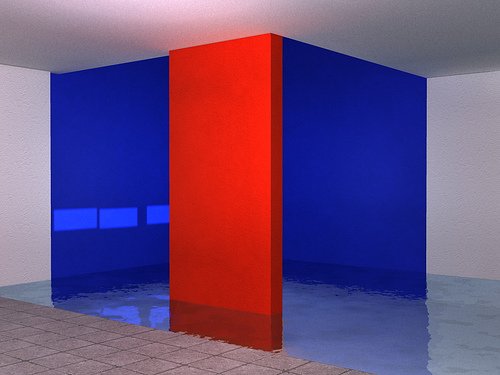 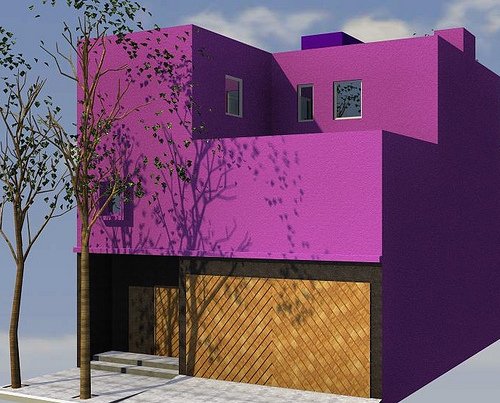 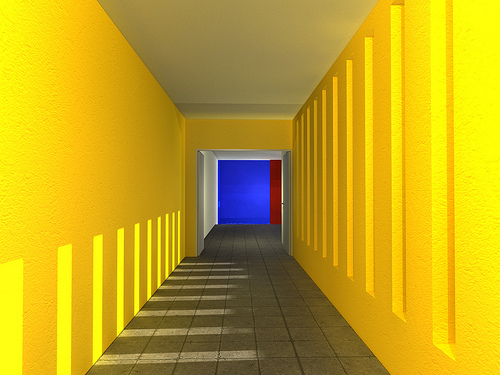 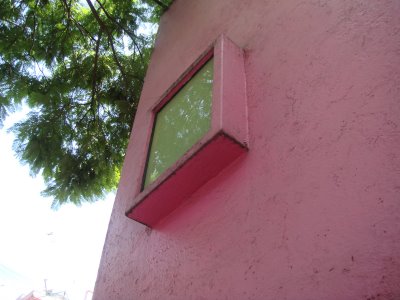 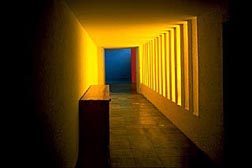 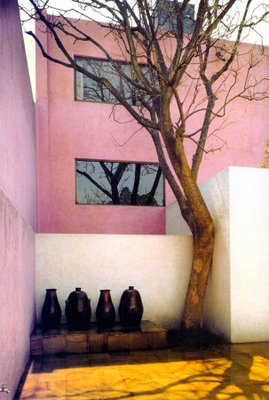 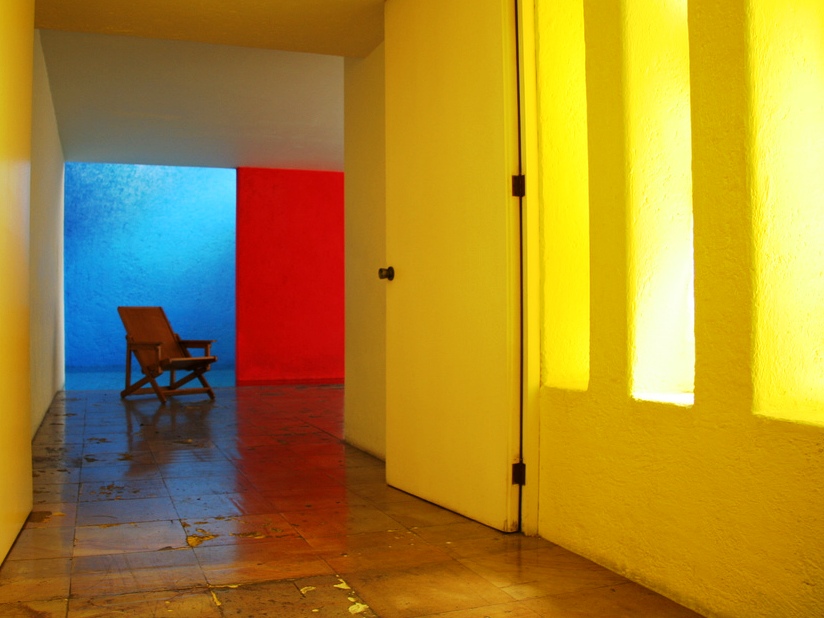 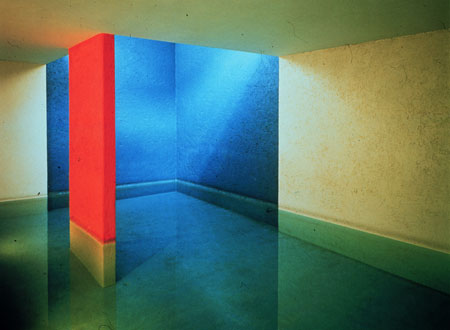 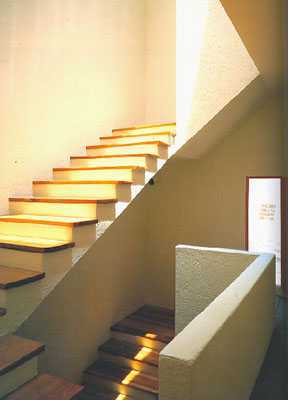 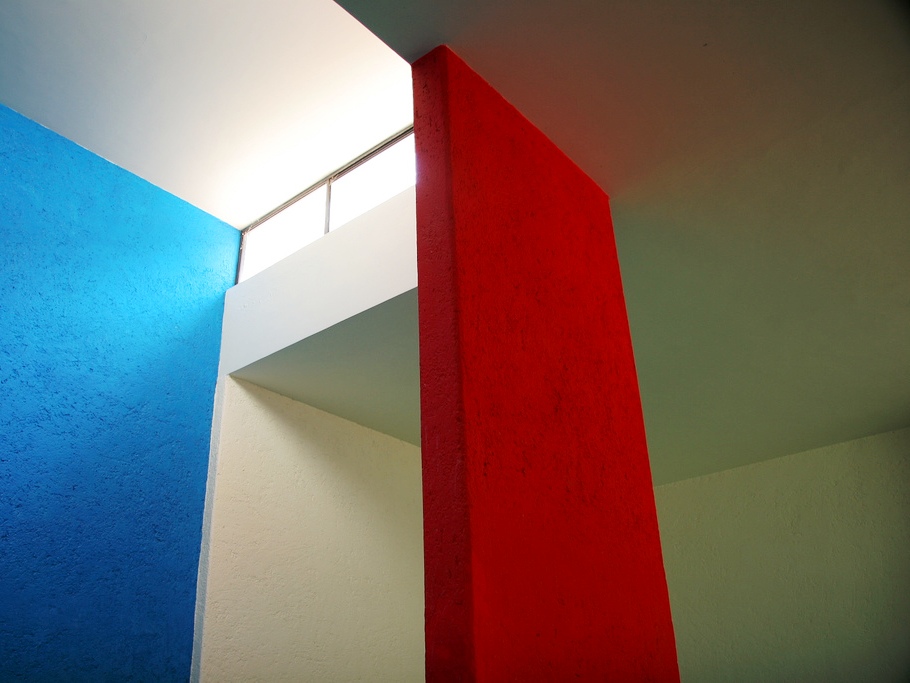 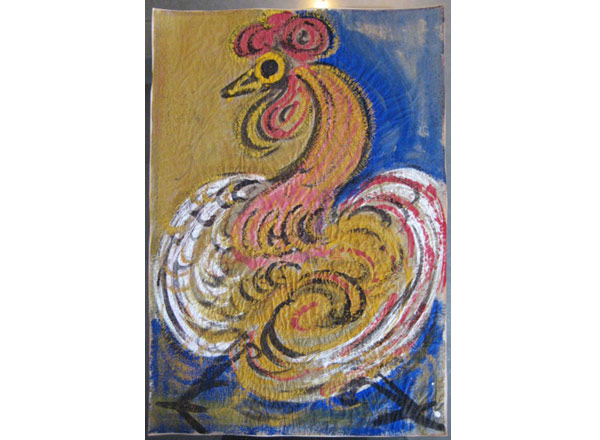 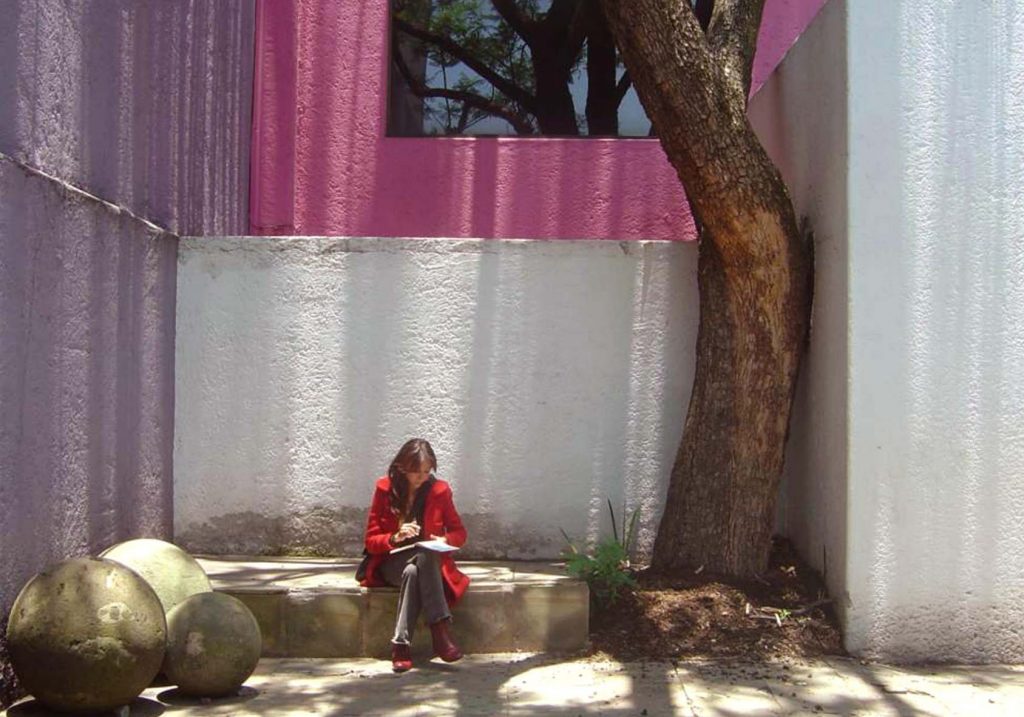 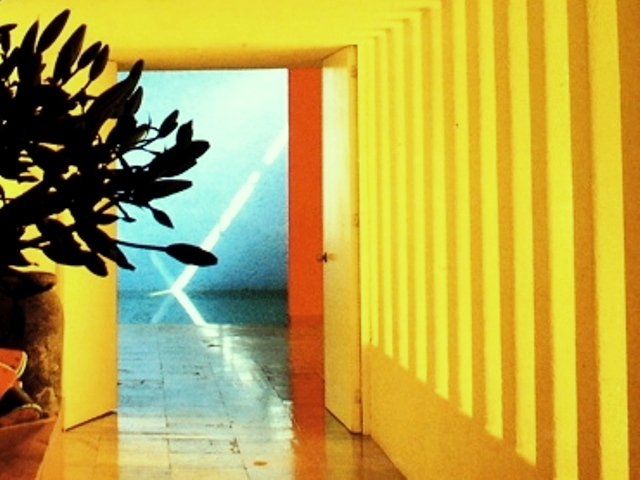 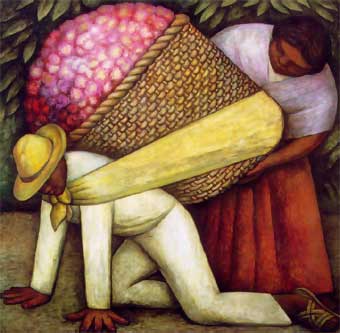 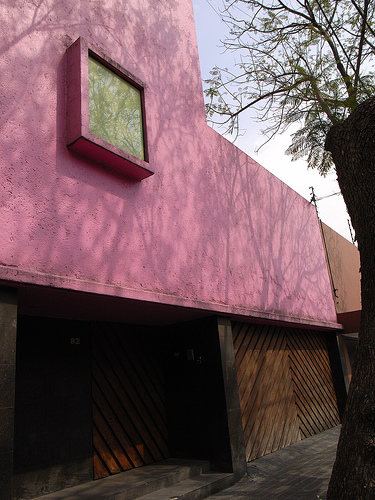