This shoe lasts factory was the first industrial commission for Walter Gropius and its design was made in collaboration with whom at that time was his partner Adolf Meyer.

At first he thought his promoter Carl Benscheidt work with another architect, Eduard Werner, but Gropius convinced him to pursue a more artistic project. To persuade his client was invited to a conference on monumental art and industrial construction and in his speech posited that “modern life needed new building organisms that match the lifestyles of our time.” “The stations, warehouses and factories require self-expression and can not be governed by any mode of living of a bygone era without falling into the vacuum and schematic historical masquerade. The exact form, lacking any chance, the contrasts of form and color are the basis of the rhythm of architectural creation. ”

Once he was awarded the Walter Gropius Fagus Factory made in different phases between 1911 and 1925, although the most common picture for the office sector which was built before the First World War, between 1911 1914.

As they were constructing each of the buildings of the complex, Gropius and Meyer took into account not only the function of each one of them but the overall visual unity. With the steady growth of the plant, which had become one of the largest in Germany, it would be completed only in 1925. Benscheidt, father and son, chose the artists of the Bauhaus school of Gropius, for interior design.

For the architect as the building had to fit the function for which it was planned and consistent with a constructive logic based on that function, your image should not hide but show it as a beautiful and modern architecture should adapt to the new world machines.

According to Gropius, without masking the exact shape, with clear contrasts, sequencing of identical forms and the unity of form and color to form the basis of the rhythm of architectural creation.

In this building are embodied these ideas, a prismatic block, three plants with rectangular and flat base which reinforced concrete structure with brackets displaced inward frees the exterior walls of any load bearing plant whose clearly expressed their interest modern commercial and functional.

The first building designed by Gropius to the shoe factory was the office and is one of the most important and characteristic of the complex.

The building has three floors with a flat roof which together with the replacement of the walls with large windows, which in turn also made up the corners of the building became one of the building systems characteristic of the modern movement, especially in high-rise as the paradigmatic Bunshaft Lever House or the Seagram Building in Mies van der Rohe and Philip Johnson or Bauhaus building in Dessau also made by Gropius.

The facade is articulated with narrow brick pillars, slightly recessed, which were placed between the iron frames sticking out of the building and housed the large windows creating a light curtain wall of a hitherto unseen, creating an inner space natural light and partly diluting indoor-outdoor boundaries. It is particularly striking resolution of the corners of the block as they converge on two windows perpendicular to the unique presence in them of the light metal support bar. According to Gropius, the factory should be a kind of palace for the workers who were offered light, air and hygienic atmosphere but also “feel the dignity of the great common idea, which of course would improve their performance”.

The front door is solved with two beautiful convex corners that create a more fluid relationship between the facade and the small porch that is set up at the door.

In 1913 he rebuilt the house and after the First World War were other works that lasted until 1925. The clock input is part of the reform of 1913 and the interior of the building that contained mainly offices, were completed by mid 20.

The two other large buildings in the complex are the production hall and warehouse. Both were built in 1911 and expanded in 1913. The production hall is a one-story building that became the present facade after enlargement.

The store is a four-story building with few openings. The design closely followed the original plan of Werner and leaves out many of the photographs. Besides them, the site contains several small buildings designed by Gropius and Meyer later.

Despite its novelty and modernity details the building is severely deteriorated over time, their iron frames are quickly oxidized and insulating the building was really poor.

The reinforced concrete structure, with supporting displaced inwards, allowed to free the exterior walls, especially at the corners of the building supporting role.

The main building, rectangular in shape, was designed as a structural framework without pillars in the corners, with a front metal grid cut by glass covers, one of the first examples of “curtain wall”, or curtain wall.

This structure does not seem constructive formal need to clarify a coating composition, on the contrary, the form and language of architecture are given by the art.

For many years it was thought that the main building was done only with a frame of concrete or steel because of its glass facade. However, during its renovation in the 80’s, it became clear that this was not the case. Jürgen Götz, the engineer responsible for the renovation since 1982, describes the construction system in this way:

“The main building was built over a basement structurally stable. A mixture of cement uncompressed gravel was used for the walls of the basement and these are unable to accommodate large single loads. From the basement up, the building was constructed in plain brickwork, reinforced with wooden floors. The roofs were reinforced formwork and finishes with a rough plaster on the side of the facility.

The floors were composed of loose boards on sleepers, ie, that the ties were not established between the floor joists. Therefore, the ceilings in the main building was not continuous shear and thus could not meet the necessary boost function. ”

Gropius’s Fagus factory is where for the first time the walls of a factory was replaced with glass. This novel, for the time, “curtain wall” has a height that spans all three floors of the building.

A metal structure of iron bars holding the glass planes that make up those windows and metal planes contribute to highlight the distribution of plants.

The narrow columns that articulate the facade and the reception and lower sockets were made of brick colored stew. 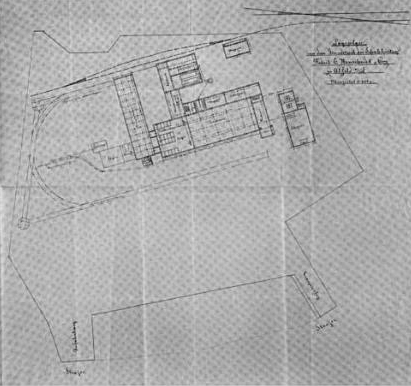 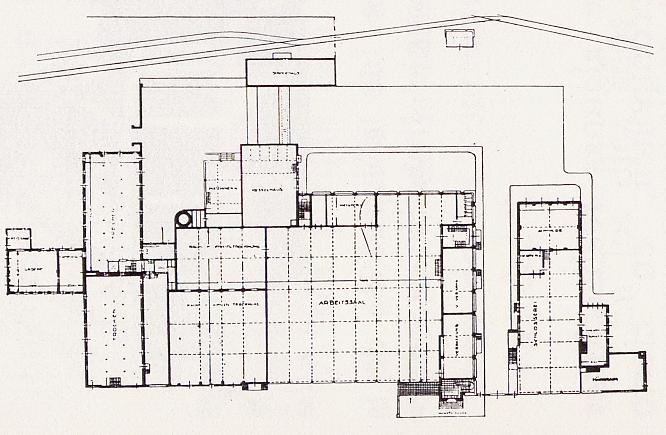 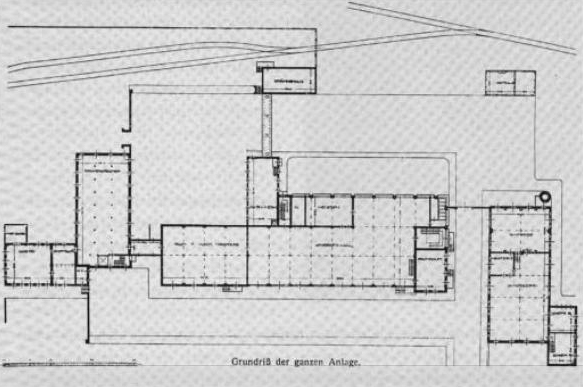 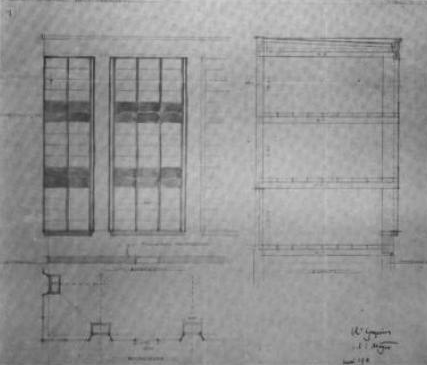 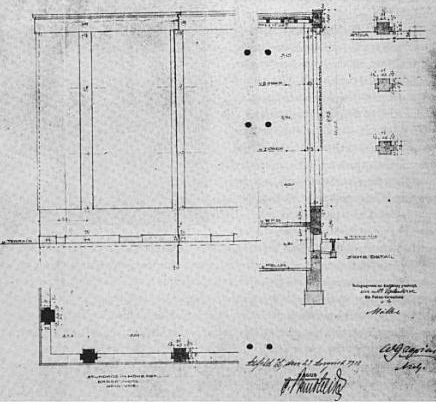 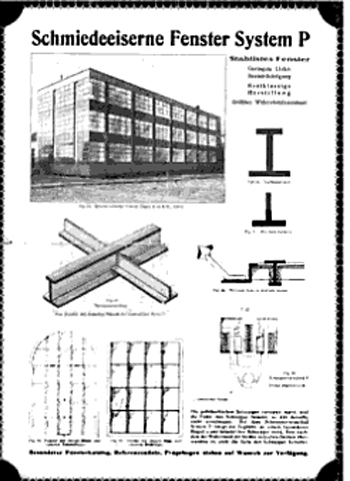 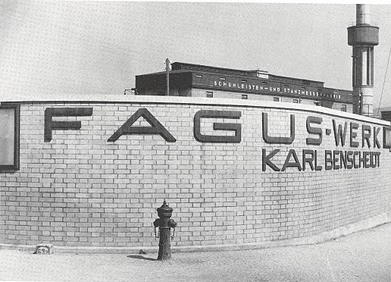 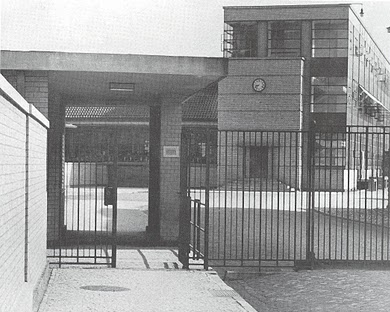 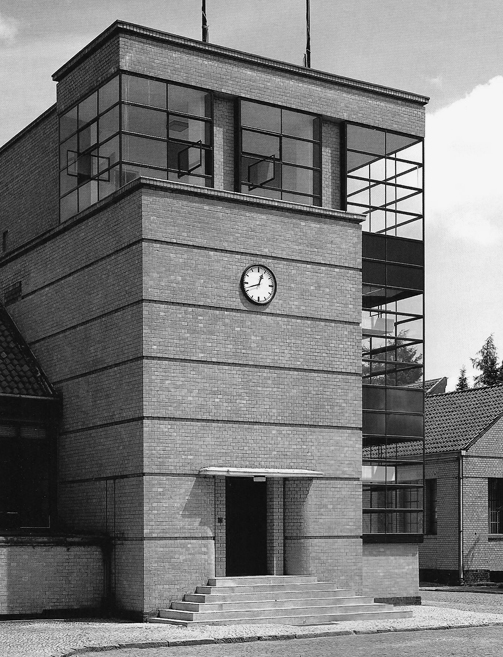 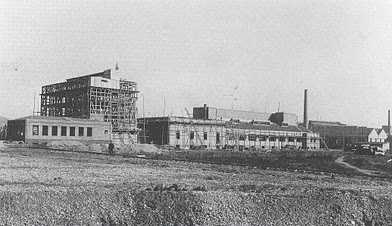 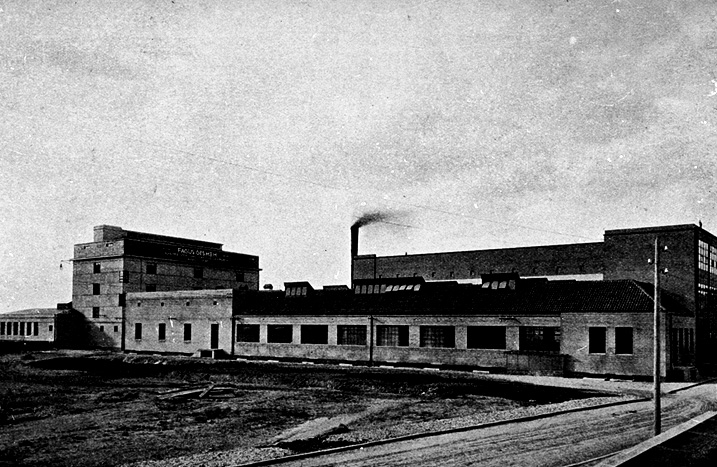 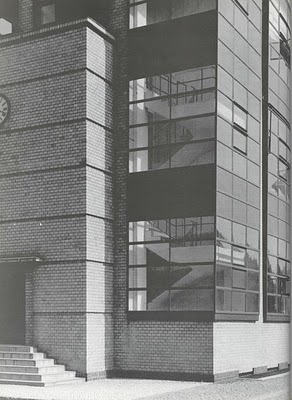 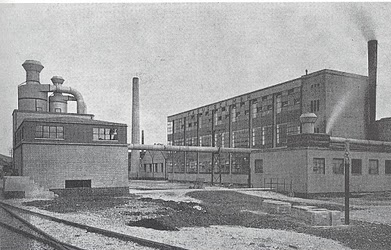 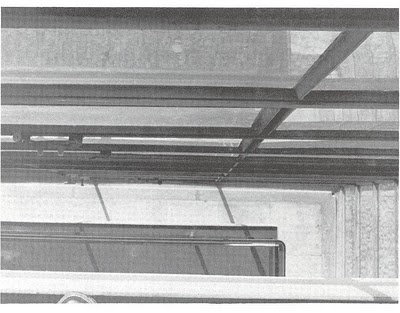 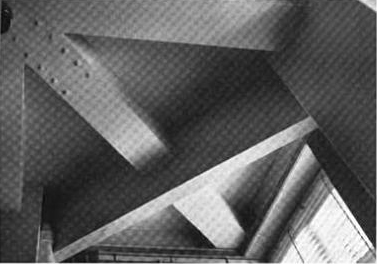 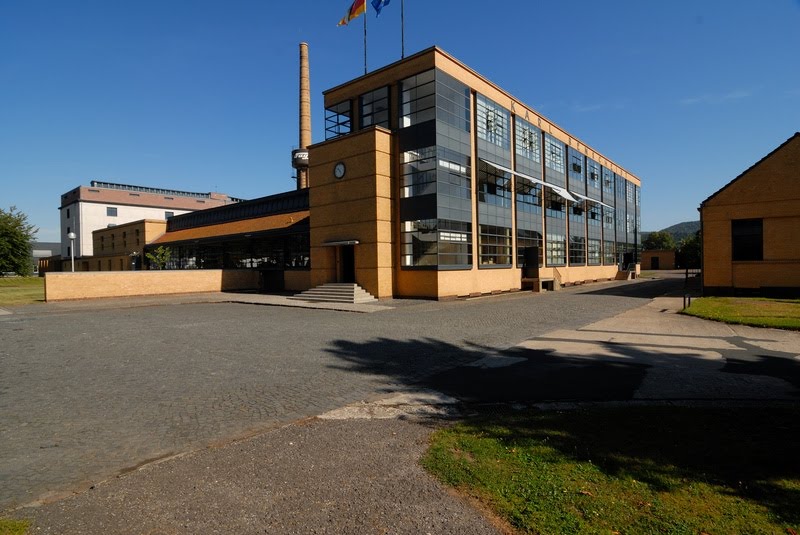 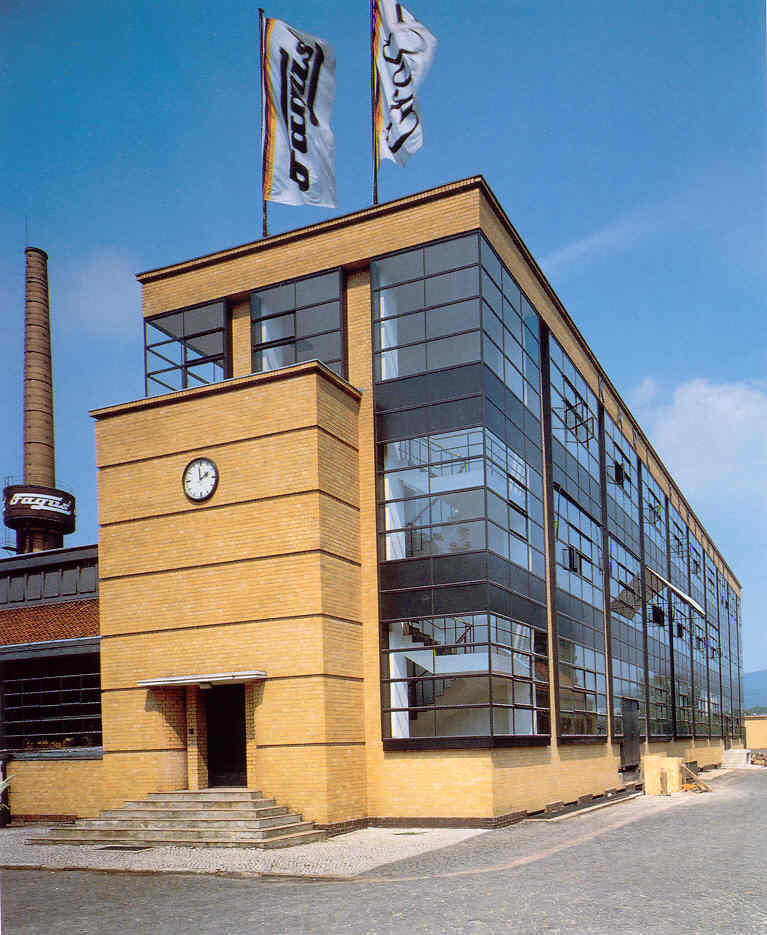 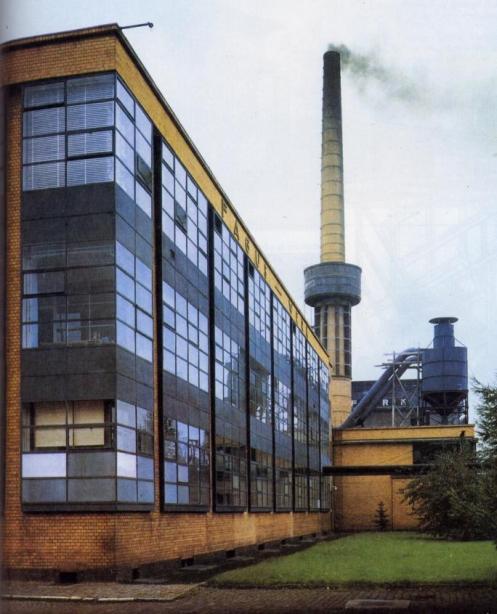 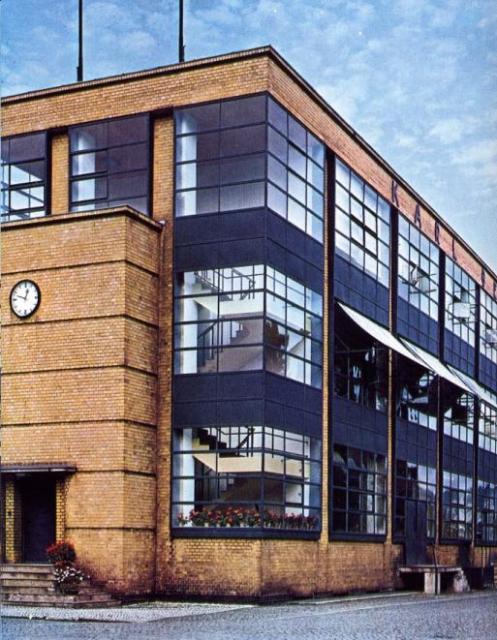 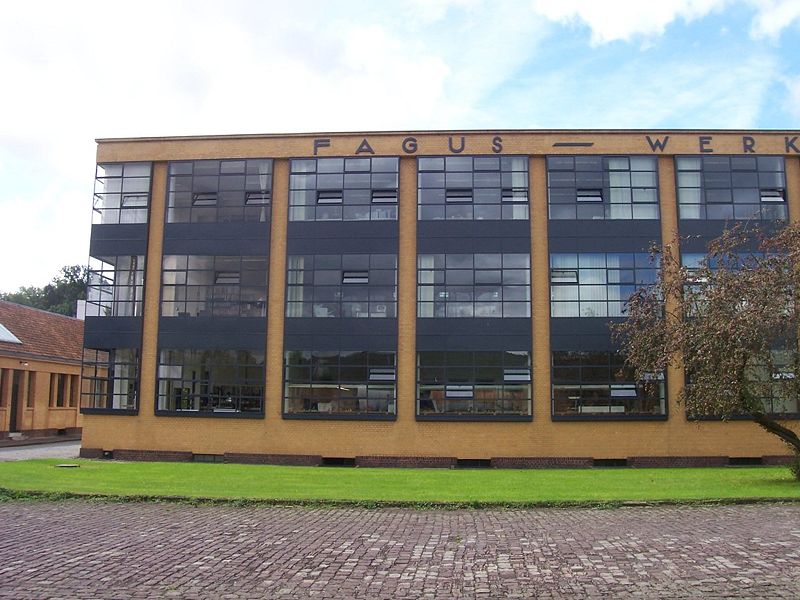 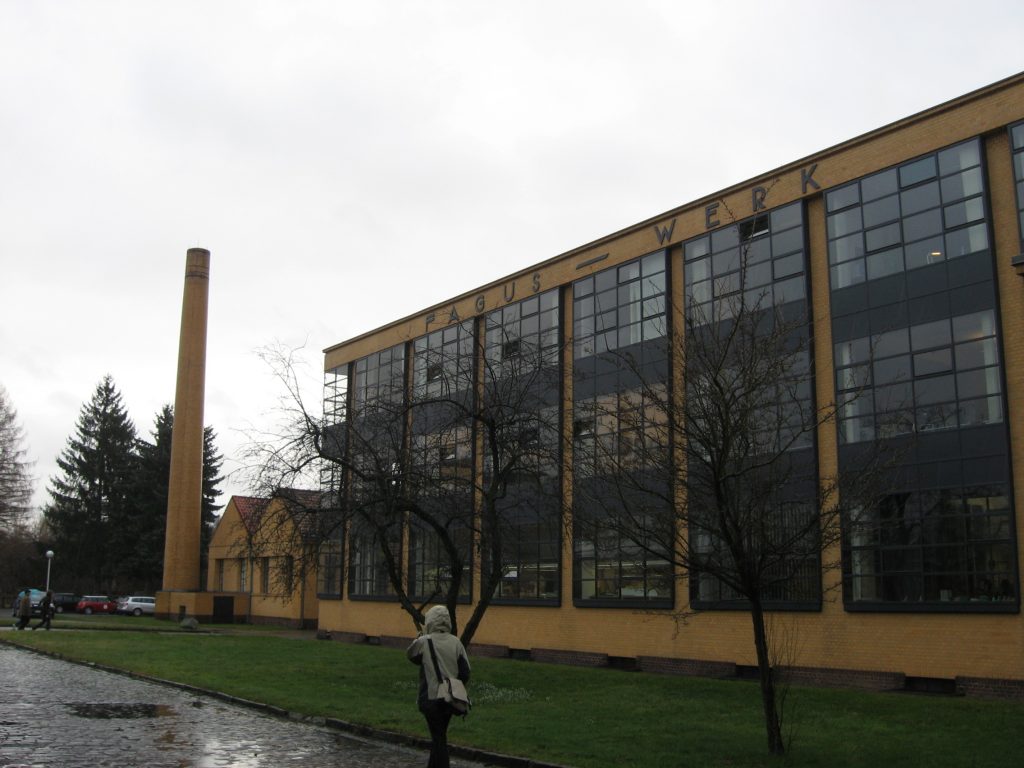 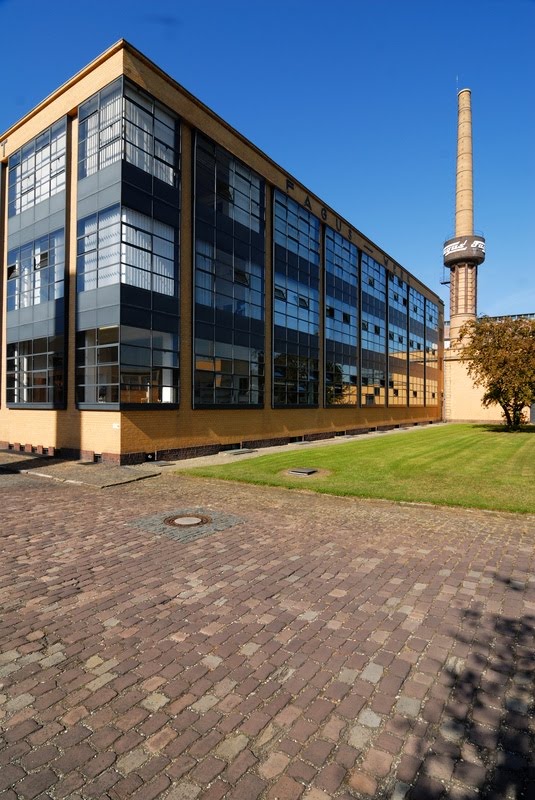 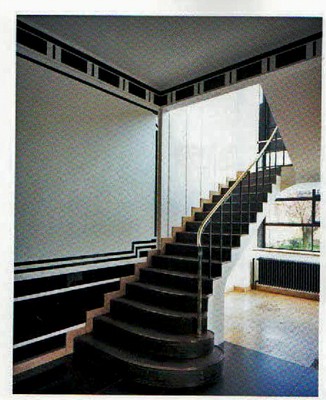 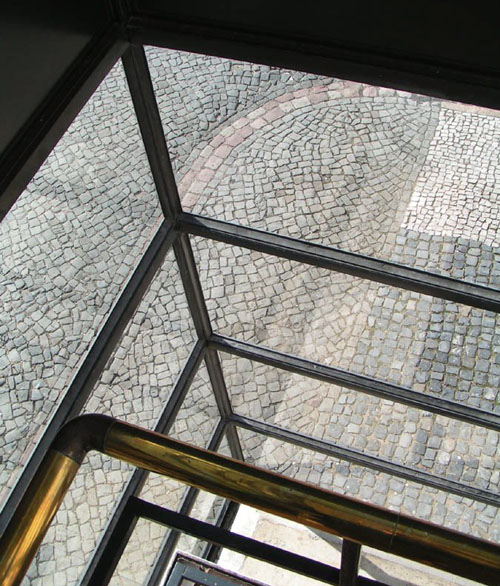 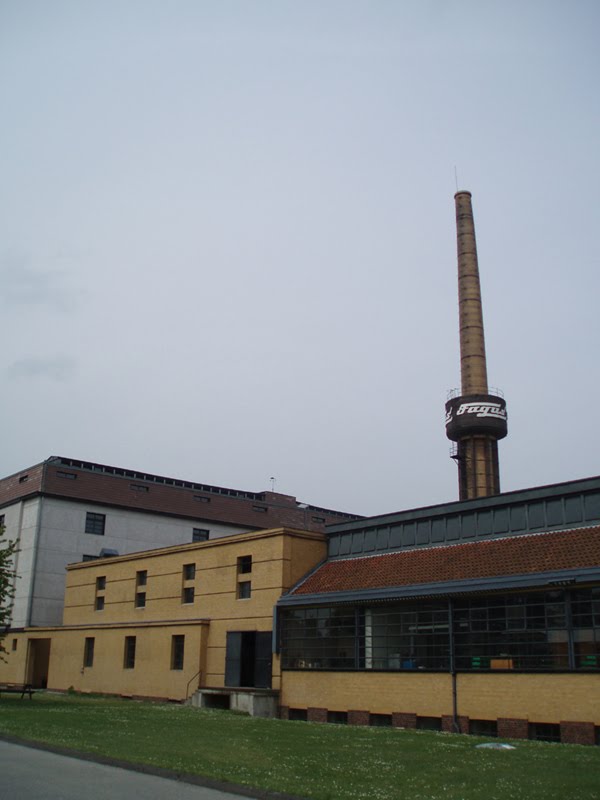 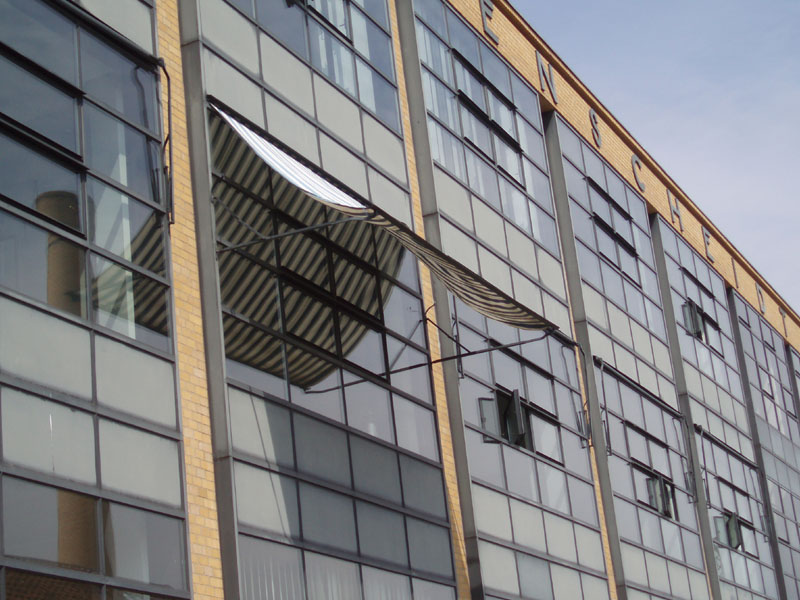