Alamillo bridge was designed and built between 1989 and 1992 during the Expo’92 in Seville by architect Santiago Calatrava.

The project was presented as an “incomplete project” of the Expo’92, which should be even more spectacular. The initial idea involved creating a twin brother, an identical bridge tilted in the opposite direction on the other channel of the Guadalquivir River. In this initial project, only one was erected, because the budget was not sufficient to cover the pair.

As in almost all the work of Calatrava, there is some controversy over the work, in particular concerning its structure. Although the mast is conceived as the element that balances the bridge, as explained in the “structure” section, it appears that in fact the bridge is self-supporting. The proof is that the cables that support the bridge are not tight at the top of the mast, contrary to what one would expect.

The Alamillo Bridge is located in Seville, Spain and crosses the Guadalquivir River.

Arpa figure has only one arm and support its weight.

With the implementation of this project by Santiago Calatrava, achieved the following objectives:

The top of the mast is actually a lookout. Access is by a staircase inside the core of the mast. Space has been reserved for the machinery of a future external panoramic lift, and elevators and stairs have been constructed to connect the two. There is a pedestrian zone, in this case, a central area separated from the movement of vehicles.

Its integration into the urban landscape enriches the place, being made of very slight forms that avoid the idea of a bridge as a static structure, especially for its impression of movement and its advanced design: a combination of technology, engineering, art and sculpture. Because of its boomerang shape, it only has one arm to support its entire weight.

It is built on the concepts of tight pylons and counterweighting.

It rises 140 meters high with an inclination of 58 degrees, a divided pair of braces holding the cables (300 m in length, the longest in the world at the time) and create a span (distance between the points of support) of 200 meters.

One of the largest cranes in the world at the time was required to build the bridge, able to lift 200 metric tons to 150 meters high.

Between the mast and the deck is a balance of forces, which are transmitted by the 13 pairs of suspender cables. Its working principle is that of balance in which the equilibrium is obtained by the collapse of the mast at an angle of 58 ° on the horizontal.
It is considered the first bridge supported by cables, in which the platform is balanced by the weight of the leaning tower.

The mas is made of hexagonal plates of steel, reinforced inside by reinforced concrete.

The bridge deck is designed as a metal structure and consists of a central platform and hexagonal anchorages where the cables attach. In this platform, metal ribs leave some 4 meters on both sides, which rests on a slab of concrete that functions as the road; there are two roads of three lanes each.

The device is made through the corresponding transitions between the concrete and metal.

The cables are made up of 60 cords of 6 inches in diameter each, except the last couple of 291m in length, consisting of only 45 cords. The cords are protected by epoxy resin, and the cable is surrounded by a sheath of high density polyethylene injected into the anchorages.

The anchors are located in the bottom platform on both sides of the central deck.

The anchor is a passive element in the face of the tilted mast, which compensates for its own weight in be bending stresses, no cables are required. 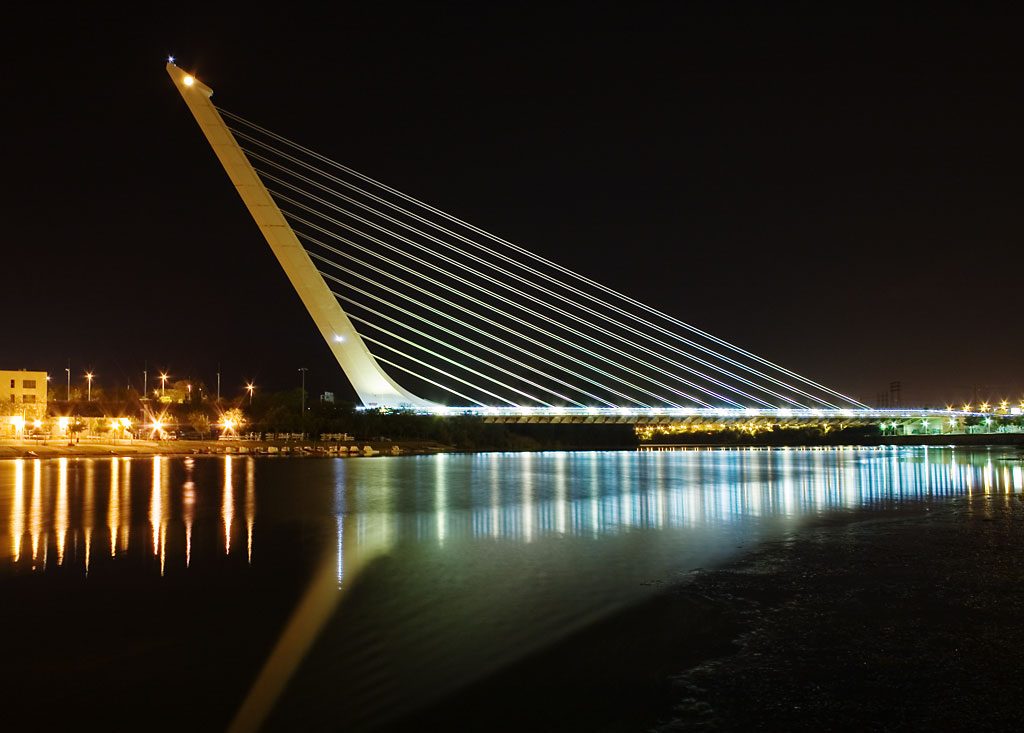 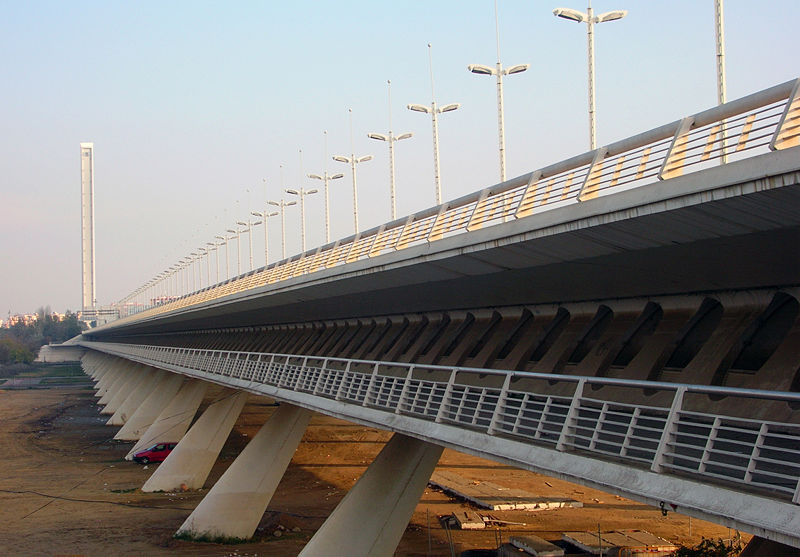 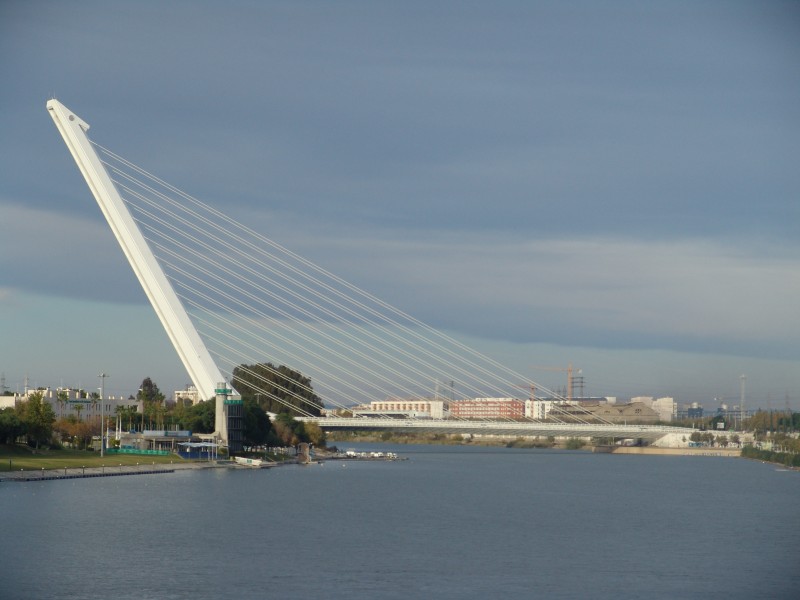 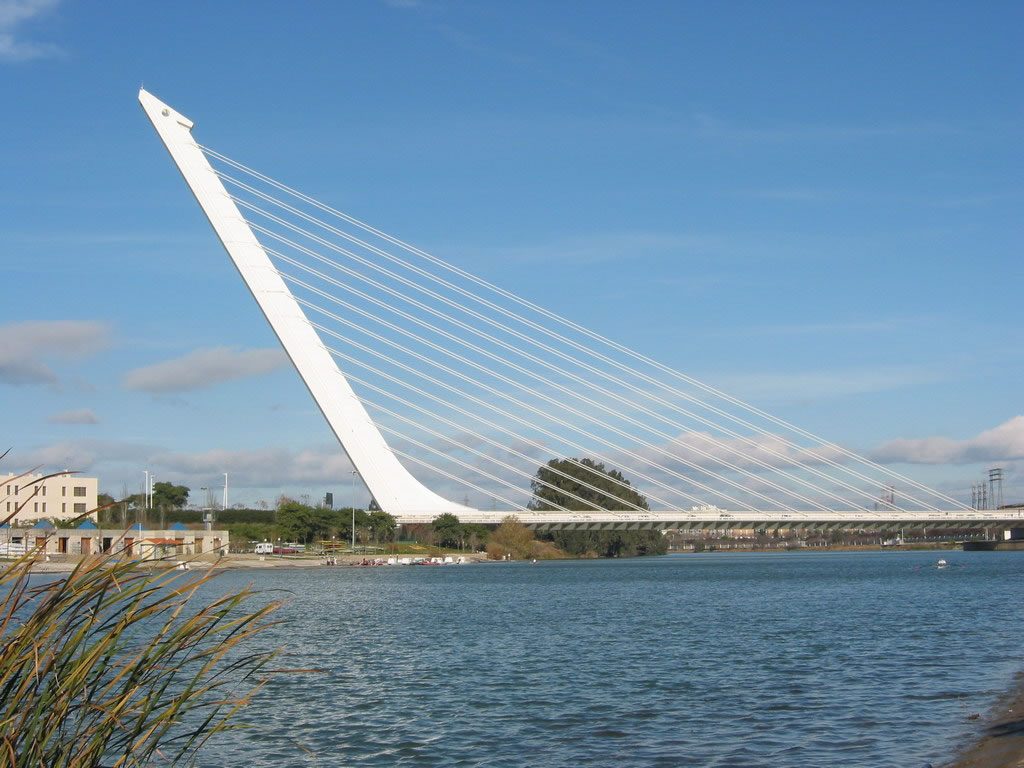 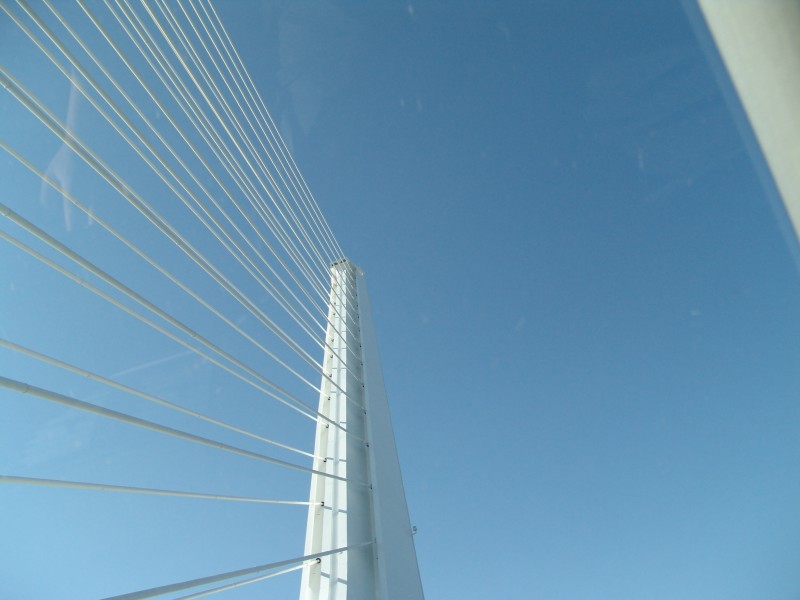